Those of you with memories slightly longer than the average goldfish may recall my January entry about the FIRST Robotics Kickoff event.

As I said then,

…FIRST (which stands for For Inspiration and Recognition of Science and Technology) was founded by inventor Dean Kamen and MIT professor Woodie Flowers back in 1989, before most students now applying to MIT were even born. The goal of FIRST, broadly speaking, is to inspire students towards a lifelong devotion to science, technology, and engineering.

FIRST works something like this: every year, in January, a star-studded team of engineers on the Game Design Committee unveil that year’s game to the 37,000+ students on 3,000+ teams in 12 countries worldwide. The games change every year, but always certain things remain the same: two alliances of three robots each compete against each other on a small, enclosed field, roughly the size of a small basketball court. The robots are based off of common kits to which teams add their own modifications and designs (subject to a sort of “salary cap” meant to mitigate economic, rather than engineering, advantages). Teams then have six weeks to conceive, design, and build their robots, which are then sent out to at least one of 57 Regionals across the world. Then, at Regionals, they’ll compete against a field of dozens for the chance to qualify for the Championship Event in Atlanta…

Last weekend, I attended the Championship in Atlanta. Though I attended primarily in a private, rather than professional, capacity – my old team, of which my father is a mentor and brother a member, was representing the Granite State Regional there – I did work with Tiffany Meertins, our Assistant Director of Special Cohorts, on some Admissions stuff while I was there. You may have seen me dashing about, swapping blue “Team 1073” shirts for gray and maroon MIT shirts depending on whether I was cheering my pals in the pits or cheering MIT on Scholarship Row.

So what is Championship like? You have to be there. But if you haven’t been there, this is the next best thing:

The field was set up in the Georgia Dome:
Championship has 5 fields, named after famous scientists. Newton, Archimedes, Curie, and Galileo are the qualifying fields. ~80 teams play essentially an entire regional in two days on these fields. Then, the winning alliances from all three fields go on to the Einstein field for the championship.

A quarter mile away, in the convention center, are the “pits”, where all the teams repair and refine their robots between matches: 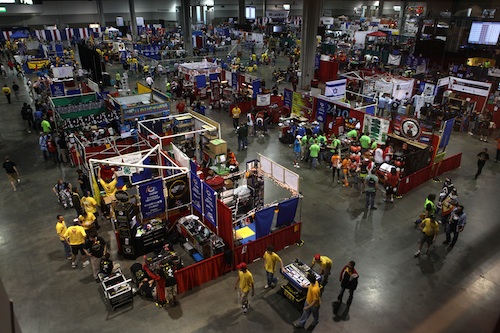 (image credit: US FIRST Robotics Press Kit)
Scholarship Row – a college fair with dozens of schools, including MIT, represented – was also in the pits, as were engineering vendors and companies strutting their stuff, as with the CIA’s booth: 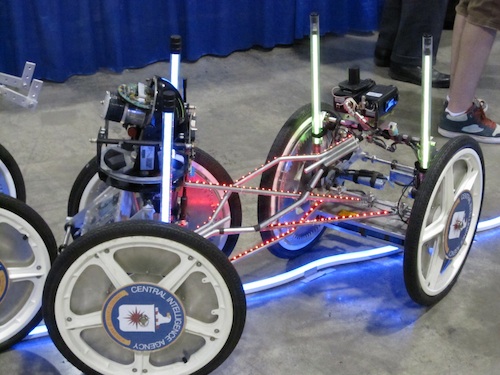 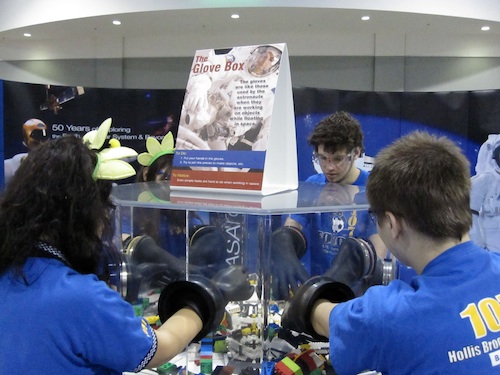 (image credit: Eric Peterson)
as well as the MIT Alumni Association:
The event opened with a seriously epic intro video:
And the teams began their play.

On Friday, everyone took a break at lunch to hear Dean announce the winners of the inaugural Dean’s List. The Dean’s List Award honors “FIRST Student Superstars.” Every year, each team nominates its two best students as Semifinalists; judges choose the two best students, known as Finalists, at each regional; and the ten Award Winners are chosen at the Championship event. One of the Award Winners this year was Seth Berg, ’14, an Early Action admitted student from Stuyvesant. All of the Award Winners and Finalists will also receive a congratulatory letter from Susan Hockfield, the President of MIT.

The award was introduced by Dean, but then a surprise address was given by Arne Duncan, the Secretary of Education of the United States:

Secretary Duncan’s appearance was a wonderful example of this administration’s devotion to Science, Technology, Math, and Engineering (STEM) initiatives. The Championship opened with Dean reading a letter from President Obama, and the Closing Address was given by Charles Bolden, a former astronaut, current administrator of NASA, and a longtime supporter of FIRST.

Finally, after two long days of qualifying matches, the playoffs rolled around on Saturday. My team had made it into the divisional semifinals on the Newton Field. Our alliance was high-powered, comprised of the winners of the Granite State Regional (Team 1073, The Force Team, from Hollis-Brookline New Hampshire, captained by Kat Struckman, MIT ’14), Boston Regional (Team 1922, Oz-Ram, from Weare New Hampshire, captained by Mike Klinker, MIT ’14), and Hartford Regional (Team 102, the Gearheads from New Jersey).

Unfortunately, we were eliminated in the divisional semifinals after an incredibly tough match. In a best of three series, we tied, tied, lost by one, and lost by one.

However, the alliance that won the Newton Field – Teams 67, 294, and 177 – went on to annihilate everyone on the Einstein field, including an epic final matchup against the eventual runners up alliance, which included Team 469, Las Guerrillas, who had an absolutely unbelievable mechanism – they rolled up to the ball-delivery slot, deployed some channels, and funneled falling balls directly into the goals in an elegant and deadly closed loop:

By the end of the weekend, I was hoarse, dehydrated, and exhausted. I’d been cheering like a madman, giving hours of information sessions at the MIT booth, and slumping in awe at the skill of some of the robots.

But most of all, I was so excited, and so impressed, that so many kids love FIRST (as I did), totally live their passion for science and technology through it, and that so many of these great kids end up here at MIT. It’s an incredible program doing incredible things, and I’m so happy I got the chance to see it.

I have to focus on other things now – cool new web projects, waitlist reconsideration, recruiting the class of 2015, etc – but you can bet that in eight months I’ll be blogging about next year’s game. See you in St Louis in 2011!

17 responses to “Notes From Atlanta”