Robot and sports and owls, oh my

It’s been a whirlwind of a week. I initially planned for this post to have some sort of structure, but it’s become a bit of a brain dump of everything that went down since last Monday.  Finals are still looming on the horizon, but the past few days have been when a lot of project classes begin to wrap up.  At least when you take an exam you know that, for better or worse, it’s going to be over in three hours.  Projects, however, have no time limit.  They can quickly fling a black hole in the middle of your Google Calendar, sucking away sleep, lectures, and other assignments as you frantically try to fix some random issue that came up at the last minute.

My black hole this week was 2.12: Introduction to Robotics (I say this lovingly, it’s an awesome class!).  All semester we have been working in teams to design, build, and control robots to assist a hemiplegic patient in a few daily tasks, with the end goal of performing in a class competition to showcase our work.  Specifically, one robot had to drive up to a cabinet while navigating around obstacles and choose a specific color of pill bottle, then assist a person in making a bed.  The other robot, which I worked on, had to help a person open a drawer and then assist them in wrapping themselves in a towel.  If this sounds like a lot to accomplish, yeah it was. Fortunately, we had a team of eleven graduate/undergrad students, and the 2.12 professors and TAs are absolutely amazing.  Going into this week, our team was pretty confident that we had made good progress and would just need to finish assembling and testing our robot on Monday night to be ready for the Tuesday night competition.

The first hint that this may not have been a realistic timeline was when our professor said the lab would remain open all night for last minute fixes.  As in, it opened at noon on Monday, and they weren’t planning to kick students out until 3 pm the next day. I thought that this was insane; there was no way our team would possibly need that much time to screw some bolts and debug some code (*insert sitcom audience laugh track*)!

Wow, was I ever wrong.  I finished basketball practice on Monday night, grabbed dinner, and entered the lab around 7:30 pm.  I did not exit until 3 pm the next day, other than an early morning nap.  I don’t know much about actual black holes, but I do know that time seemed to warp that night.  Maybe it was due to the fact that the TA’s generously provided a stream of carbs and bottled water, or that we had a hard deadline fast approaching, or maybe it was just the fact that the lab was in a windowless basement, but the hours passed ridiculously fast. 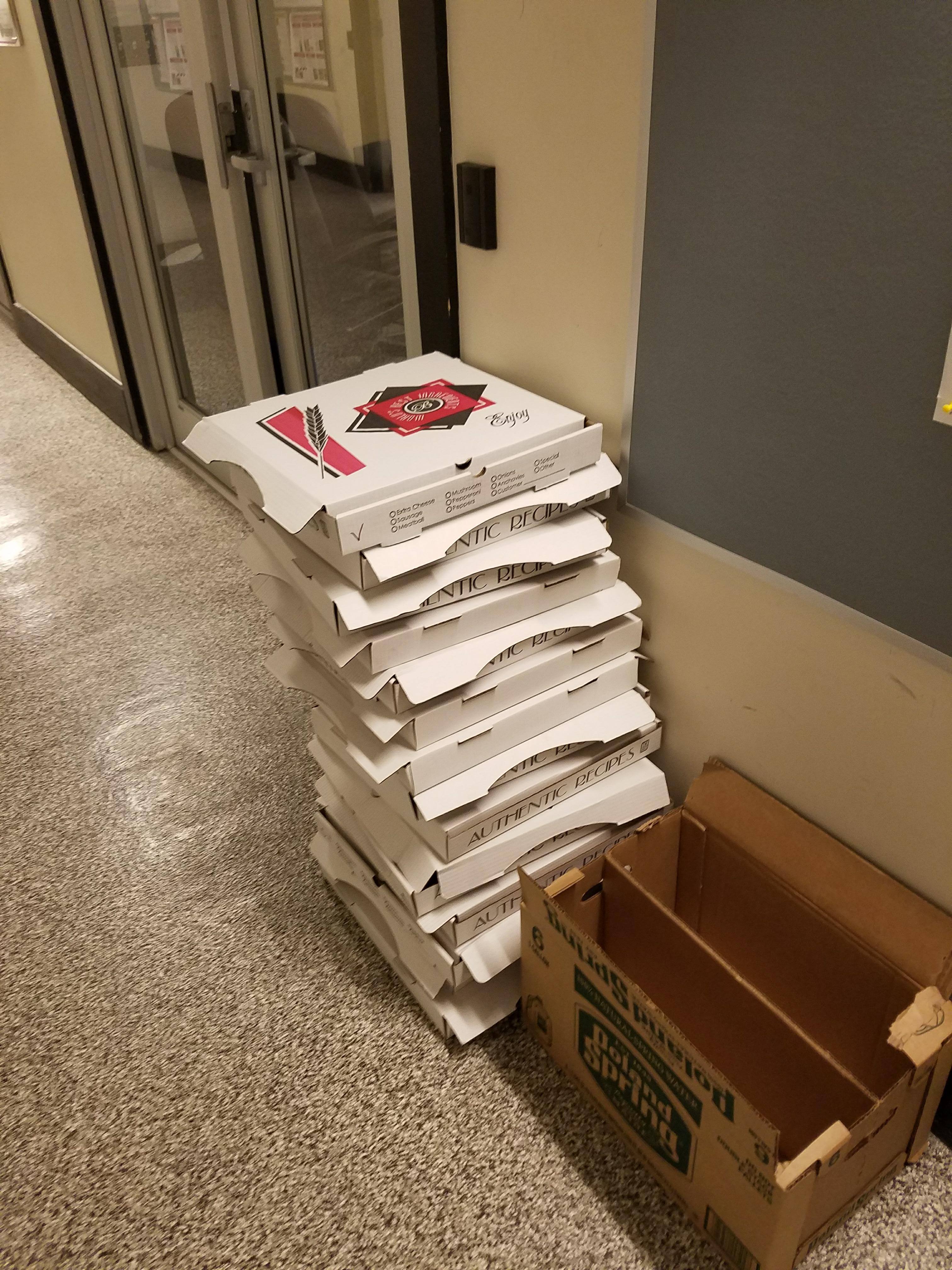 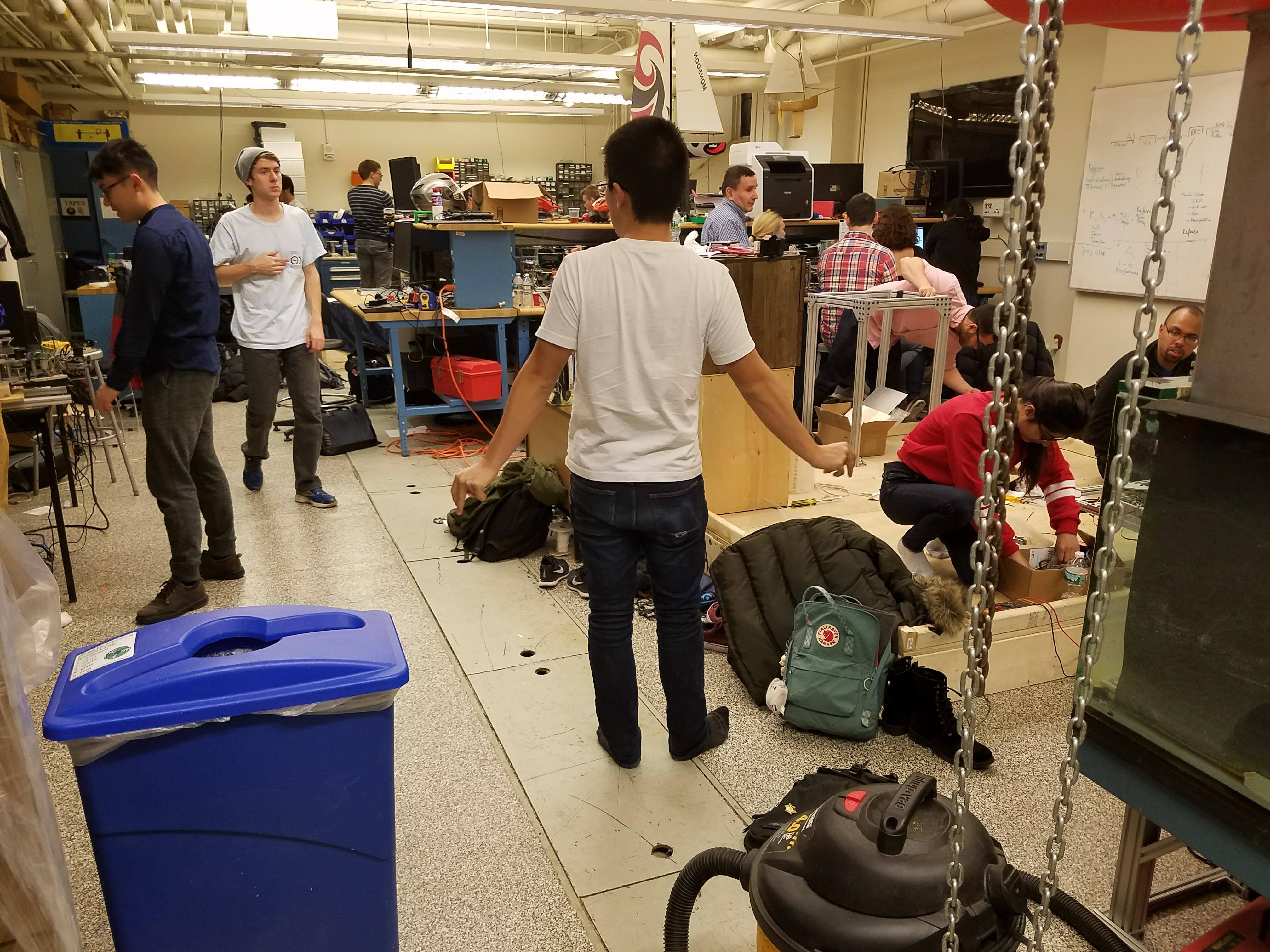 Anyway, here’s our robot doing it’s thing.  The fact that I’m standing there ready to yank out the wires and cut power just in case something goes terribly wrong, yet nothing actually goes terribly wrong, suggests this is some of the later testing on Tuesday afternoon:

And then, the competition!: 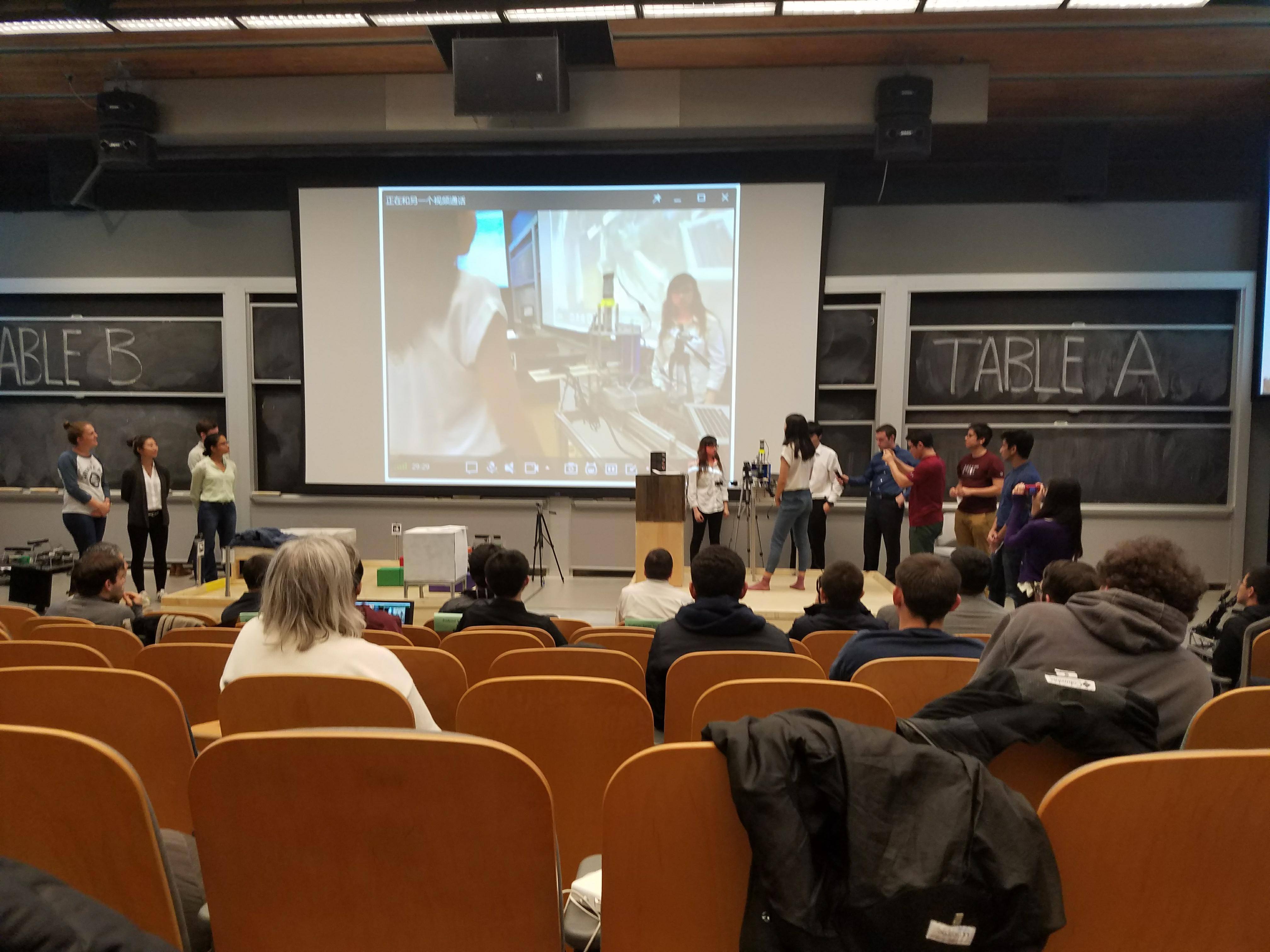 It’s a bit of a stretch to call the final presentations a competition, at least in the usual way.  Sure, the teams were scored and the top two scores got trophies, etc., but we weren’t going head to head.  No robot battles, unfortunately. it was much more of a showcase of all of our hard work this semester.  The tasks were so difficult that when a team was able to complete a run smoothly, they were cheered on by all of the other teams, too. Even in the lab the night before, there had been a friendliness between teams that was really awesome to see. Whenever we had hit a bug or had questions about implementing something that we saw another team do, other students were always happy to offer solutions and advice.  As it goes in most activities at MIT, the challenges/psets/metaphorical mountains to climb are too hard to do alone, and besides, it’s more fun if everyone makes it to the top.

Then, 24 hours later, the “competition-that’s-really-more-of-a-fun-learning-experience” mentality went out the window. Our basketball team had its 6th game of the season at Emerson College on Wednesday night. Preparation for the game was (naturally) much different from 2.12.  No robots were involved, although that could be cool!  All-nighters and 3 am pizza slices are also generally ill-advised the night before.  Also, the other team is no longer your friends/lab partners, and they have to be scouted and prepared for.  Fortunately, the hard work and focus going into the game paid off, and we headed back across the river with a win.

Then, Thursday. Another day, another lab, another project. This time it was for 2.008: Design and Manufacturing II, where I am on a team of five students mass-producing owl yo-yos (everyone makes yo-yos, we chose the owl part).

So much injection molding. So much fun.  The past few days have really been gratifying for this class.  We’ve spent all semester tweaking the CAD designs and machining the molds, and now we finally get to see the parts in real life. If you haven’t seen an injection molding machine before, here’s a crash course.  This is what some of our parts looked like: 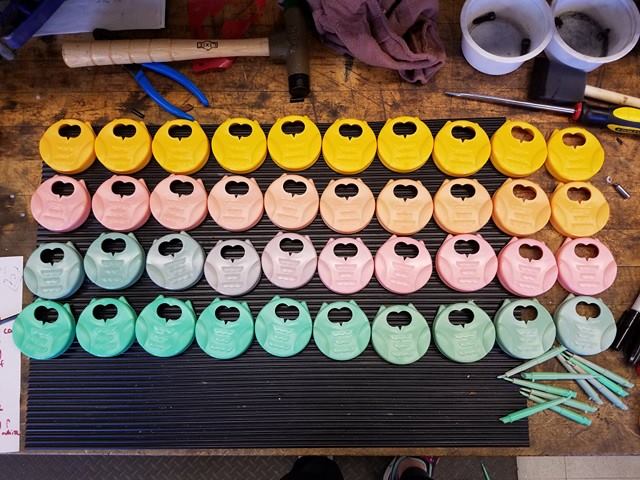 (not pictured: many iterations of the mold design, the optimizing of temperatures, times, and pressures, the 3D printed and thermoformed parts, etc.).

And this is what the yo-yos looked like after assembly: 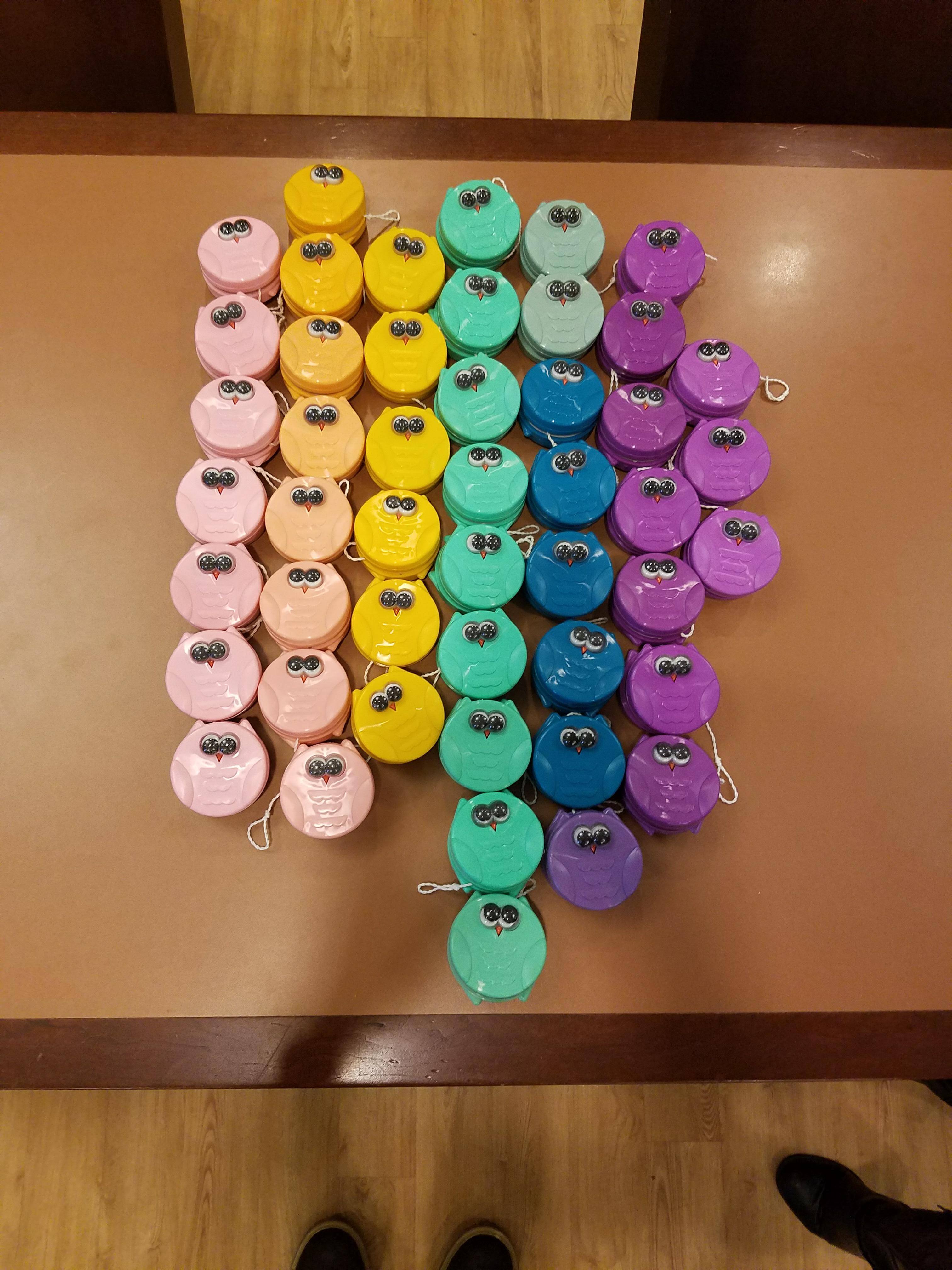 Fun fact: a gathering of owls is known as a “parliament”!

There have been definitely been some lessons learned as the semester has been winding down.

Robotics has taught me a lot about machine design, and has also taught me to be skeptical of anything that involves more than ten lines of code.

There was also a specific moment in this past week that showed me true meaning of “IHTFP”:

At some point around 5 am on Tuesday morning I was having trouble keeping my eyes open in lab, so I figured it might be a good call to cease twiddling with wires for a bit and take a quick nap.  I stumbled back to Maseeh, fell into bed… and promptly fell asleep in the process of setting my alarm.  When I woke up two hours later, it was light outside and I completely panicked.  Stumbling around the room, I grabbed a pair of shoes and my backpack and sprinted down the stairs.  When I tell you that I was completely disoriented, that’s an understatement- I don’t think I even woke up fully until I reached Mass. Ave. It was as I was standing there at the crosswalk that it hit me that I had no idea what time it was, or really even what day.  I didn’t know what state our robot was currently in, or if we were going to finish our code in time.  I had been in lab ten hours already, and there was no end in sight.  And yet all I felt as I staggered back to the basement was excitement, and I knew in that moment, there was nowhere else I’d rather be.