Our FAPnomenol Start of Sophomore Year! by Danny and Allan G. '20

Hello! Wow, we can’t believe we’re actually writing this thing that you are reading right now, because we’re obsessed with these blogs! Now we’re writing here, and that’s just crazy! So before anything else, we just want to say that we will try our absolute best to provide helpful, authentic, and enjoyable content in the next couple years as bloggers past and present have done for us! Also *virtual hugs* for being our audience!

It’s probably clear from our avatar, but we are going to be blogging as a duo! That’s some pretty new territory on these blogs, but for us it’s something we’re really used to, because we’d already been twin blogging (as we like to call it) for all of high school, and we’ve been twins, well, our entire lives. Lots of people find it hard to tell us apart (and that’s reasonable — we look alike, have really similar interests, and pull things like this whole twin blogging thing — so we honestly don’t mind people not knowing who’s who). It’s pretty funny though, every time we meet a new person together, they almost always asks us at least one of the following: Are you guys twins? Who’s older? How can I tell you guys apart? And since this is our introduction on these blogs. Here are our answers: Yes, Allan, and get to know us :). *segway alert* We recently had many of these interactions about 3 weeks ago with some very artsy 2021s.

FAP – which obviously stands for Freshman Arts Program – is a weeklong FPOP (freshman pre-orientation program) that we were counselors for, and it was absolutely incredible! At the time of the program, we weren’t sophomores yet because of the “conservation of frosh,” (meaning freshmen are still freshmen until the next class year goes through convocation). But we still felt as though this program marked the start of our sophomore year, because we had frosh ask us questions as though we actually know what we’re doing (/0`_0\). Little did they know, we just fake it ‘till we make it. We probably faked it too well though because one of our FAPpers (as the counselors affectionately referred to the freshman during the program) asked us, “Are you guys like seniors?” to which we then replied with laughter and that same hesitation you get when writing the date on the first assignment of the new year, “we’re fr-sophomores.” Looking back we should’ve said this instead:

Ok, we’re getting ahead of ourselves. Rewind to August 19th 10:00am – the day of the first counselor meeting to prepare for FAP. We walk into W20-491. We were the first ones to get to the room because we were too excited and ended up waking up early and speed walking down dorm row! As other counselors started coming into the room, we did introductions. We actually knew some people already, which was really nice! As we waited for more people to stroll in, one of the counselors told “the one about the two whales” (a joke that can literally last forever), which became a staple of the week. And when everyone came in after the whale joke ended (though we wished to see someone’s reaction walking into the room mid-whale joke, because it involves many excessive whale noises), the 3-day preparation officially started!

This involved counselors preparing the room, acquiring supplies, making some things, and getting to know each other (by watching a quality piece of cinema: Troll 2, not to be mistaken for the recent animated film Trolls, nor it’s upcoming sequel, nor the sequel to Troll, nor even a movie about trolls, rather a thriller about vegetarian GOBLINS that turn people into plants and eat them. Up next, Goblin 2, a movie about TROLLS. Wish that was a joke, but it’s not.) Also many spontaneous hugs and cuddle puddles. 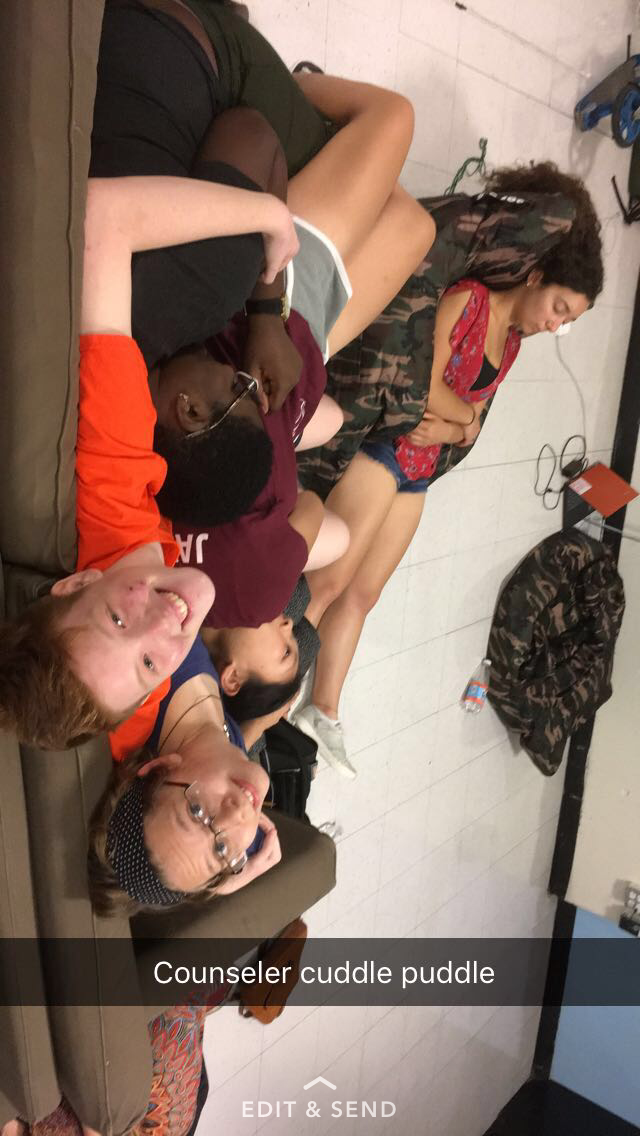 Now fast forward to Tuesday morning. The FAPpers arrived. We messaged them in our GroupMe to meet us outside of the student center at 2:30, specifying that we’d be waiting for them there with a big sign. And this is what we get on the GroupMe at 2:31, when we were in the elevator on our way down to the steps we said we would be on. 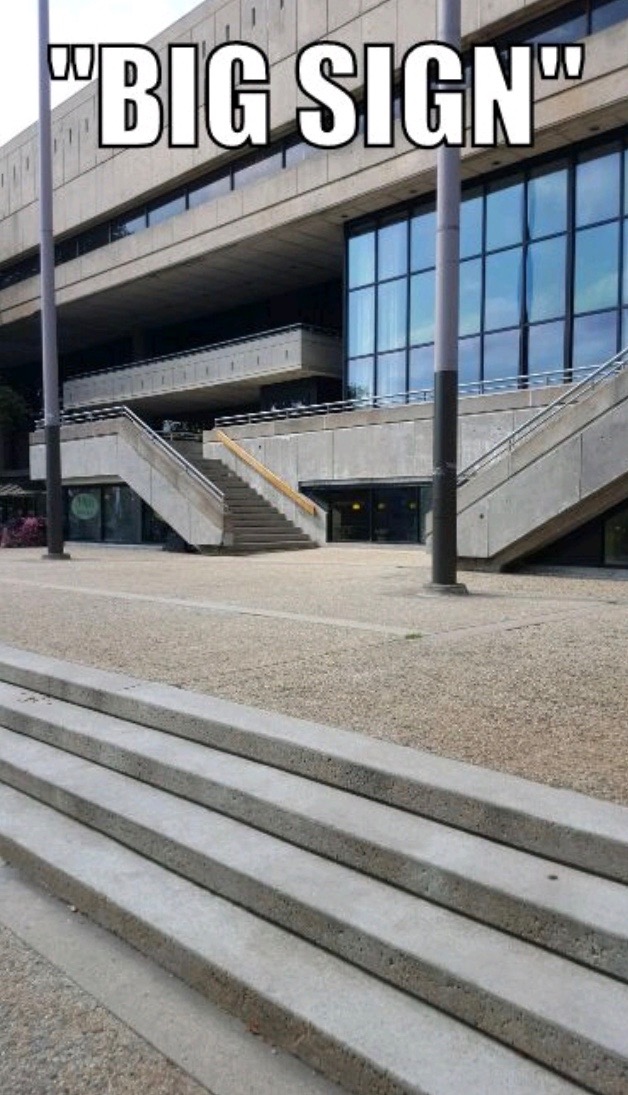 In our defense, we were going by MIT time (things start 5 minutes after they are scheduled for), so we weren’t actually ever late. (Read with sarcasm: we were all very punctual and responsible counselors every single day of the week.)

We can’t disclose any more, because events repeat from year to year, many are left unknown to the FAPpers, and the counselors need to retain the element of surprise *maniacal suspicious laughter*.

But here are two pictures (because we couldn’t choose which is better) of our fellow counselors (minus Ony because he wasn’t here that day, minus Danny because he was taking the picture, plus Allan’s knee for no apparent reason actually) reacting to one of the surprise activities. 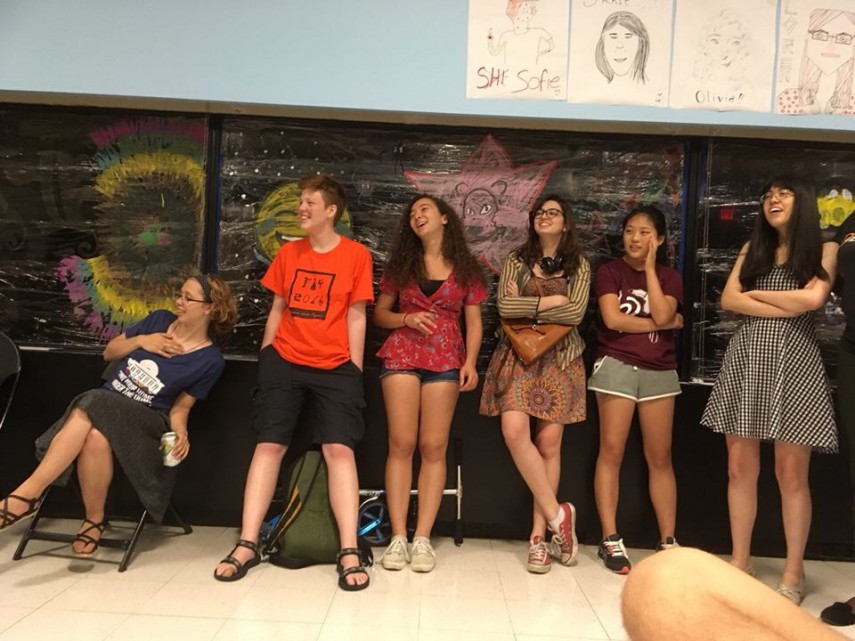 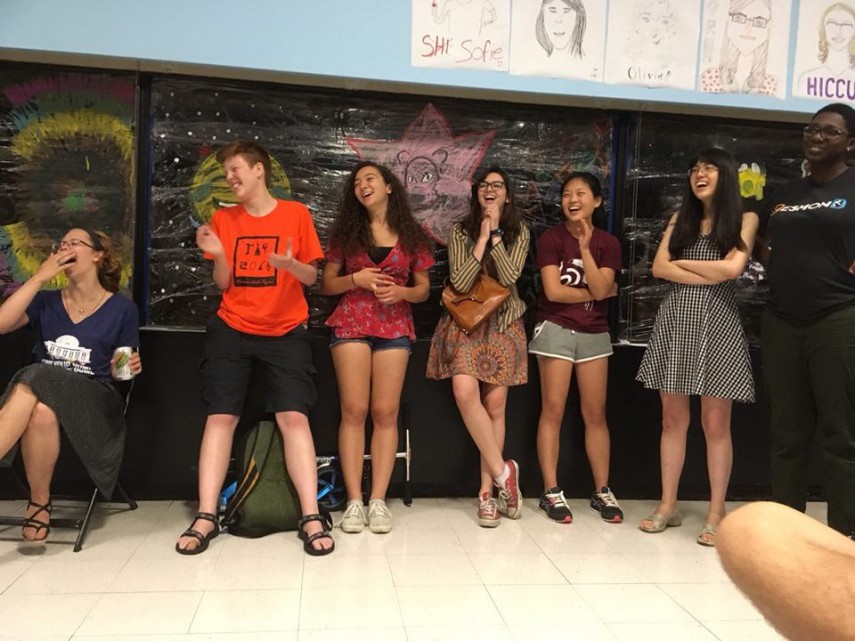 And here is one with all the counselors body spelling FAP

From left to right and up to down:
Sofie the FAPtain ’19; Loren the paint chips connoisseur ’20; Olivia the stapler finder ’19; Not Allan (as one of the FAPpers called Danny) ’20; Hiccup the one you find in the corner knitting ’18; Not Danny (as that same FAPper called Allan) ’20; Ony the one who “never” napped ’19; Victoria the J-walker ’18; Joanna the pun-k ’20; Jackie aka actual cannibal Shia LaAngryJackie ‘18

After FAP ended, we went back to Florida for a week. We saw a high school friend one of the days and in a conversation she said, “… when I was in high school…” and continued talking for a solid minute until she said, “wait none of us reacted adversely to ‘when I was in high school’. That’s weird.” That actually sums up our current feelings pretty well…how have we survived this crazy amazing terrible beautiful stressful place (IHTFP) long enough that high school actually feels even remotely distant? On that note, here’s to sophomore year and everything it brings!