This is the fourth and final installment of our sentimental objects blog series, where we describe the random memorabilia that we collected over the school year and that we stored in our memory mushroom. Here are the first, second, and third installments, in case you want to read them! As we described in those posts, memory mushroom is what we named this slightly damaged ceramic mushroom container in which we store memories. We usually include a picture of the ceramic mushroom itself in these posts. But right now, it’s wrapped around in a blanket and shielded by pillows, all stuffed in a cardboard box that is locked away in a storage unit. We usually lay out all the trinkets on our dorm room floor. But we did not have time to do so before we left campus in what was the craziest week of our undergrad experience, so we stuffed all the trinkets in a plastic bag that we stuffed in our suitcase,⁠01 which we closed shut by no less than a miracle, not particularly because of the sentimental objects... we just have way to much stuff, re: our hoarding tendencies, re:re: this post and took the picture from our home in Florida. And we usually don’t stop collecting trinkets until the very end of the school year. But this year’s collecting stopped in March when we were sent home, so we honestly could have written this post earlier. But ultimately, we decided to wait because we thought this might give us some sense of closure for the end of the school year. ⁠02 read: we procrastinated

Anyways, here are our sentimental objects! 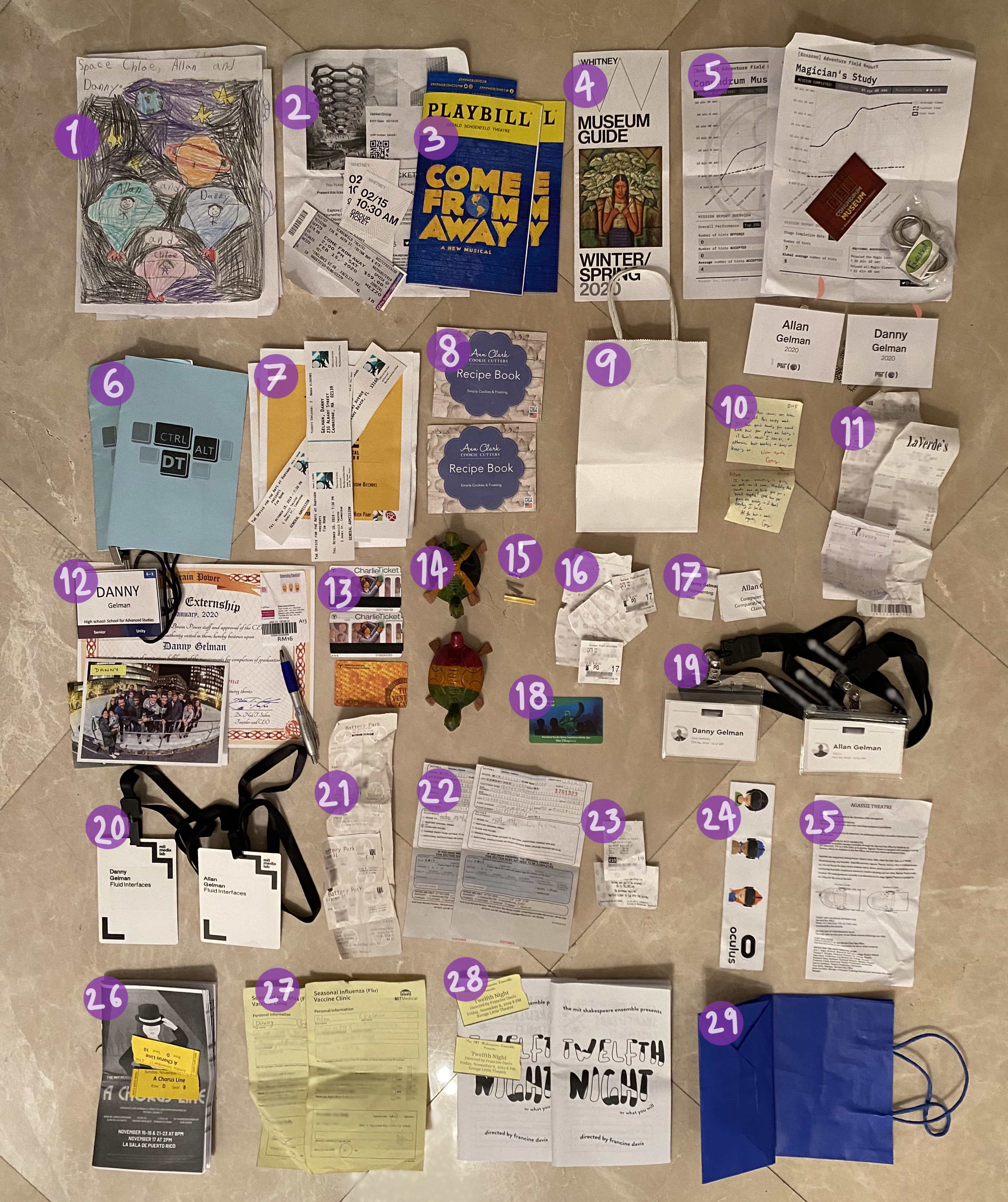 1) Incredibly cute drawings that our seven year old cousin made us when we visited our family in Brooklyn for Thanksgiving Break. The one visible in this picture shows the three of us in space!

2) Tickets for the Vessel, Come from Away, and the Whitney Museum of American Art from when we went to the annual Arts Scholars New York trip in February

3) Come from Away playbills… this musical was soooo goood!! We discuss it more in the Art Scholars post linked above!

4) Whitney Museum map/guide… very very cool museum, which we also discussed in more detail and include pictures of in that same post!

5) Printed escape room results from when our Fun and Games professor took our class to Boxaroo (an escape room in Boston founded by MIT Alums) and metallic disentanglement puzzles that a puzzle maker guest speaker gave us when he came to our Fun and Games class. Both the escape the room and the puzzles that the guest speaker showed us/let us attempt to solve were really fun!

6) Dance Troupe programs from the fall showcase that we saw our friends Nia and Luisa in! They both were amazing, and the whole show in general was too, as DT shows always are!!

7) Harvard’s fall production of Fun Home program and tickets from when we went to see it with Jude and bumped into Rona. Everyone in it was so good! Also, we just LOVE this musical. We love this moment in this recent Fun Home cast reunion video when Beth Malone, who played Alison Bechdel, sings a small part of the first sound bite she heard from Fun Home before auditioning and describes her initial reaction to it. Her reaction perfectly describes how we feel about this show! (Also, we didn’t realize until now that we placed the tickets in a very unfortunate position that is covering the cover art on the program rip)

8) Two complementary recipe books we received from when we ordered chemistry and shoe shaped cookie cutters for our friend Katherine’s birthday!

12) Danny’s externship certificate of completion, name tag, Brain Power shirt sticker, Brain Power pen, and card that has a picture of the ice skating outing on the front and nice  goodbye/thank you notes from the full-timers and the other externs inside.

13) Charlie Cards we don’t remember for sure why we purchased, but suspect were from when our mom visited us in October and we took the T to the Boston Public Garden

14) Wooden turtle dolls Nia gifted us from her summer trip!

15) A collection of pen bits that Allan broke off from pens he fiddled with over the course of his externship. Clarification: this was not representative of his experience though, those were just unfortunately the only trinkets he brought back with him. We found them when doing laundry and they fell out of pants pockets lol

16) Receipt from Imperial Tea, a boba/bento box place in Miami, and Cats movie tickets from when we were hanging out with our high school friend over winter break!

17) Allan’s career fair sticker (Danny lost his). Danny’s name tag sticker from an onsite interview he failed (Allan lost his from when he interviewed with this company and also failed).

18) Magic kingdom ticket card from when we and our mom drove to Orlando to spend the day in the park with our uncle, aunt, and cousins from Brooklyn and to celebrate the older cousin’s seventh birthday (same cousin who drew us in space in #1!) just before our senior year started

19) Name tags from another on-site interview we both failed

21) Frozen 2 tickets from when we went to see it with our aunt and seven year old cousin (again, same cousin from #1 and #18) during our Thanksgiving break trip to Brooklyn (same trip from #1)

23) Little Women ticket from when Danny went to see it with Jude, Rona, and Edwin over IAP

26) Program and tickets from when we went to see A Chorus Line in the fall that Caroline was in and that we went to with our friend Lilia. It was reallly good and really interesting to see a show that highlighted so many different kinds of perspectives/backstories of aspiring dancers!

We don’t know when we will be reunited with memory mushroom again, but we plan to continue using it for memory storage. Where else would we store our memories!