Sentimental Objects (part one) by Danny and Allan G. '20

We are very sentimental people. Not like the keeps-every-birthday-card-in-a-cute-box-sentimental type. More like borderline-hoarders-that-have-to-assess-the-potential-value-of-a-random-reciept-sentimental-types. We’ve always kind of been like this, and it wasn’t a problem in high school, because our mom kept us in check organiztion wise (read: she threw away all the trash we wanted to keep). But entering college as adults^TM, we knew we’d eventually have to solve the issue ourselves. Lucky for us, very soon after our freshman year started, Anastassia B. ’16 was moving and decided to give us a bag of things she no longer needed, but thought we might find useful. Well, she was right! Because among those items was a fairly large hollow ceramic mushroom. And since the beginning of freshman fall, we’ve been collecting our sentimental objects in it. And have been referring to it as our Memory Mushroom (not to be mistaken with friendly mushroom, though we hope our memory mushroom is also friendly).

Unfortunately our Memory Mushroom has finite volume. In fact, by the end of freshman spring, it was basically doing this:

(gif made by allan)

So in order to start the cycle again for sophomore year, we decided to transfer all the freshman things into a bag that now sits next to the Memory Mushroom. So, this being the first of a hopefully four part series, here are our Freshman Sentimental Objects! 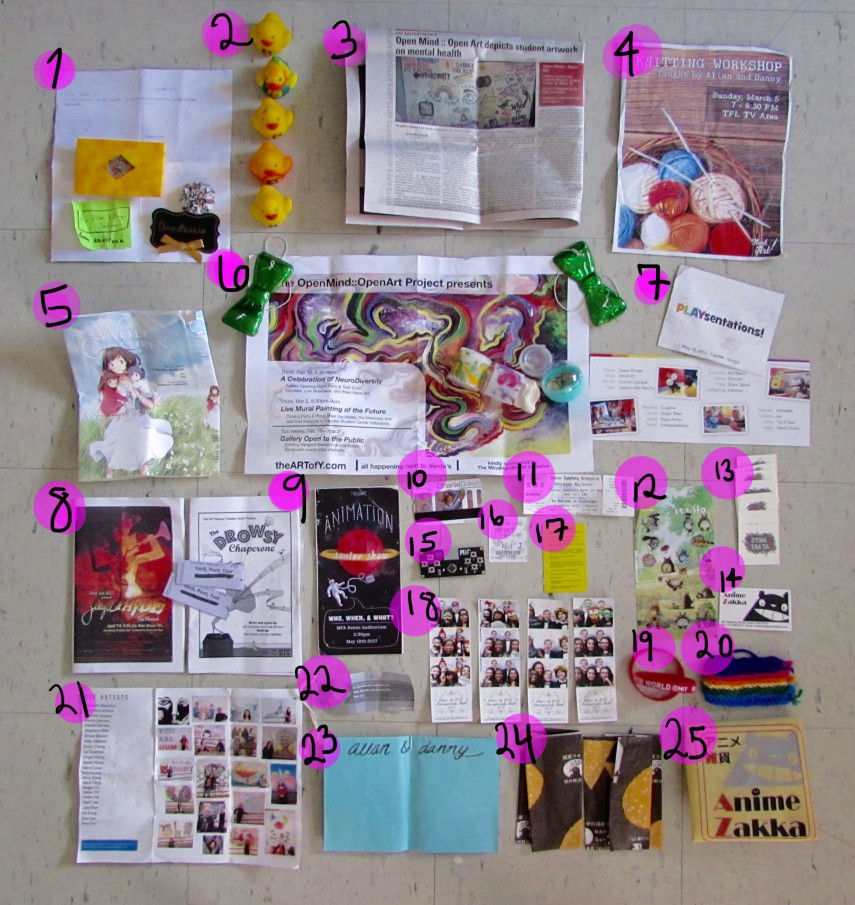 1) Trinkets from Anastassia B. ’16 :
• a very good quality paper with random lines of text that we typed on her actual typewriter. It was so satisfying!
• A little blackboard name tag
• A really cool pin
• A yellow envelope thing which we don’t know how to use
• And a green sticky note! This was the sticky note that was on the top of the memory mushroom when Anastassia gave it to us!

3) The newspaper article for the OpenMind::OpenArt Project!

4) A flyer for a knitting workshop we hosted for the Next House Art Club!

5) The book cover of the manga for Wolf Children! We saw Wolf Children last year and literally fell in love. So this was a present that one of our freinds from highschool gave Allan for secret santa

6) Trinkets related to OpenMind::OpenArt:
• Plastic bows that all the artist and makers wore during opening night
• Two film canisters filled with clay
• And a sphere thing filled with button pins

7) Playsentation flyers! Playsentations were the presentations for the super cool class we took last semester, 2.00b (Toy Design)! (you can’t tell probably, but Allan is actually pictured getting super soaked by a five year old in the flyer)

8) Tickets/programs of shows we’ve seen on campus (all of which were phenomenal!):
• Jekyll and Hyde – this was put on by Next Act over CPW
• Hack Punt Tool – a musical written by MIT students, about MIT students, put on by the Musical Theater Guild (MTG)
• The Drowsy Chaperone – also put on by the MTG
• We don’t have the program for some reason, but we also saw Urinetown – which was put on by MTG

11) One Boston Symphony Orchestra Ticket (we saw, but mainly listened to, during an ESG outing)

14) The business card of Anime Zakka

15) A circuit board that you can play games on that we actually soldered ourselves during a Next House CPW workshop!

16) One Wonder Woman movie ticket (we saw it with high school friends over the summer, and it was AWESOME)

17) A yellow card specifying the rules of Hacking, which we acquired at a time in a place

18) Four photo booth picture strips from the Class of 2020 Masquerade Ball (in one of them we are referencing Bob’s Burger! Allan being Gene, Danny being Loise, and our friend being ……..uhhhhhhhhhhhhh……….. Tina)

19) Two red bracelets that we got from “One World,” the annual MIT tent parties (that we totally didn’t just go to for the food. But in all seriousness, this event is super fun and amazing, it was just happening during a really busy week towards the end of last semester, so the only thing on our mind was sleep and food and basic human functions)

21) The program of muralists/animators for the Borderline Project

23) A birthday card our floor in Next House made us! It used to have a Steven Universe themed drawing on it made by our freind, but we really liked it so it is now on our door!

24) The wrapping paper of a birthday present (different flavored poki) that Danny’s partner in Visual Computing (4.520) gave him

25) A folded bag from Anime Zakka – the current home of all of these items, since the memory mushroom is busy collecting our sophomore year sentimental objects

(gif made by danny)