This is part 2 of a four part series spread across our four years at the ‘tvte (for the first part, go here). Throughout the school year, we like to collect things that we are too attached to to throw away. We put these things in a ceramic, mushroom-shaped container (which we affectionately refer to as our memory mushroom), and when it overflows (which it inevitably does), we pile the stuff next to it. 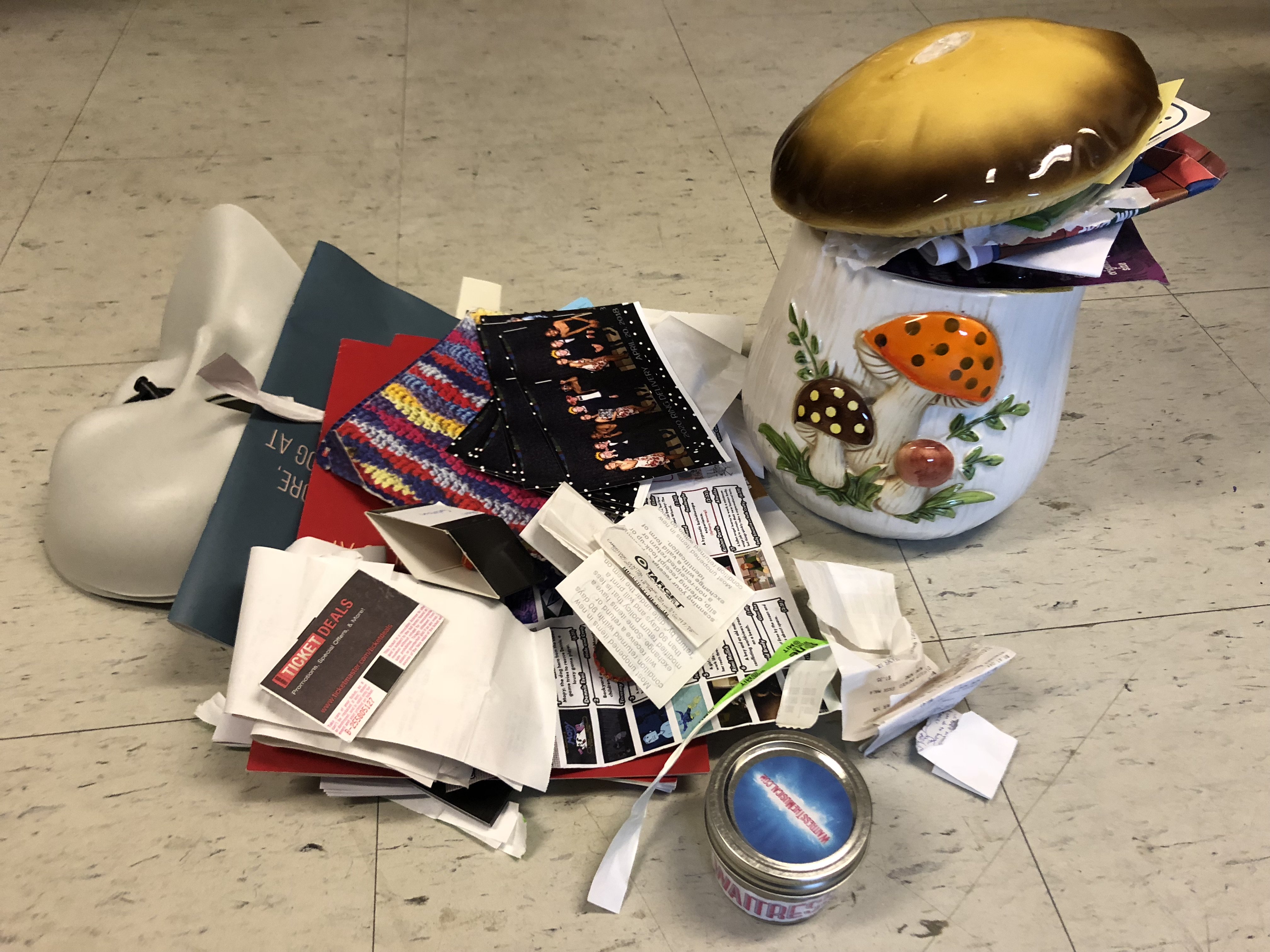 At the end of the year, we like to go through all of the stuff we collected, and reflect on the memories associated with each item, which is what you see below! 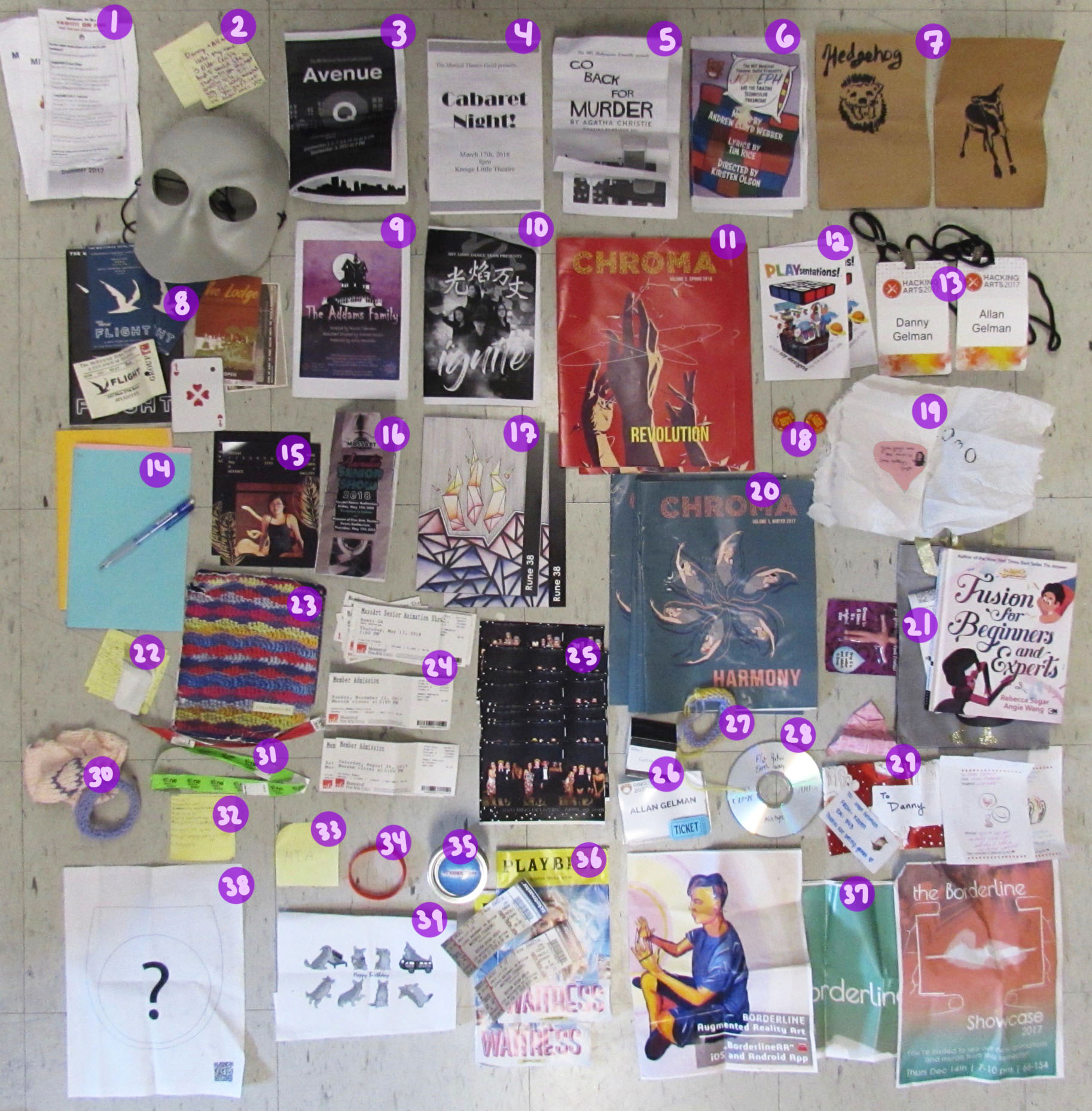 1) The program for Yaoi on Fire, the fire spinning club’s summer and fall semester encore performance. It was based on one of our favorite animes, Yuri on Ice! And our really awesome friend was in it, performing with a sword that they machined!

2) Sticky notes with beautifully wholesome messages we got from our lovely freshman (that we counseled in Freshman Arts Program) during the last dinner of the week in Unos! Can’t wait to be counselors again in a couple months!

3) The program for Avenue Q, a play that multiple friends were in!

4) The program for Cabaret Night! Only Danny got to see this, but it was an awesome show put on by the Musical Theater Guild where people performed awesome solos!

5) The program for Go Back for Murder, another play that multiple freinds were in! We saw it with our friend Nia during IAP, as described in this blog!

6) The program for Joseph and the Amazing Technicolor Dreamcoat — This is another MTG show we saw! Our favorite song was Those Canaan Days !

7) Hedgehog and dear ink drawing our friend (and founder of Borderline) Julia R. ‘18 made us after the Borderline fall semester showcase!

8) Trinkets from our first time going on the annual Art Scholars trip! It was an awesome day, where we got to see 2 Avant-garde shows (Flight and Sleep No More), explore NYC, and eat a fancy dinner with art friendos! Displayed are:

**Dave Malloy is a person we LOVE because he also wrote Natasha, Pierre, and The Great Comet of 1812 (Comet, for short)***

***Comet is a musical we, shockingly, LOVE and is the first and only musical we ever saw live on Broadway

9) The program of The Addams Family! This was the show Next Act put on this year during CPW, and it was amazzinngg! We became obsessed with the soundtrack after seeing it! Our favorite character was Morticia, who our friend Victoria L. ‘18 played PERFECTLY. Victoria also made spoopy eye contact with us and fellow FAP counselor Joanna G. ’20 throughout the show! We also became very obsessed with the voice of the original actress who played Morticia, specifically at this moment.

10) The program of Ignite, the very first ever dance showcase we attended at MIT! Our friend Katherine C. ‘19 was in it!!

11) Chroma’s second edition, which we were both staff on!

12) Program for Playsentations, the final presentation for 2.00b (Toy Design)! We both took 2.00b last year, so we decided to support some freshmen friendos taking it this year!

13) Hacking Arts name tags that we got for representing Borderline!

14) Our birthday cards from our wing! It’s a 3E tradition to set out a card the day before every person’s birthday for everyone to sign. Then at midnight, we sing that person Happy Birthday, and whack them (more or less gently) with pillows n times, where n = their age + 1 (the 1 is for good luck!)

15) Invitations to an art show put on by our friend, Jessie W. ‘19! It displayed a series of metallic leaf paintings she made throughout this semester! Very beautiful and inspirational! After gawking at the incredible paintings, we bumped into our friend Elissa H. ’21 and started talking about Steven Universe because it was the day after two episodes came out that SHOOK the whole fandom …. those who keep up with Steven Universe KNOW!

16) Program for the MassArt Senior Animation show! It was an incredible show with some extremely well made animated short films! It definitely did not contribute to the major and career dilemma that we have been having this entire semester…. ha ha …. nope not at all… blog about this to come…

18) Bottle caps of the first ginger we ever tried! Our friend Charlotte M. ’20 invited us to J entry to try *real* ginger beer after we tried the ginger beer she and our friend Caroline B. ’21 made, which apparently was not *real* because it wasn’t gingery enough and too yeasty. (we thought both we’re excellent tbh, but also saw their point after trying the real deal)

19) Cute note + paper towel wrapping from a present that our friend Joana gave us! It was hanging on our door knob after a stressful day! Much Appreciated <3

20) Chroma’s first edition, which we were both staff on!

21) Presents from our fantabulous friend from high school, Ale! @Ale, if you are reading this, can’t wait to see you this summer!

23) The cover that fell off one of Allan’s notebooks

24) Tickets from various times we went to the MFA (Museum of Fine Arts) this year!

28) A CD proving that the earth, like a CD, is actually flat and hollow… the theory was contrived and confirmed true by J entry…a course 12 lives there so it’s very legit… they gave a presentation about it at Activities Halfway during CPW too, alongside MIT Confessions, MIT Memes, and MassTech

33) A sticky note that says “MTA,” used as a prop to recreate the intro of this video in a snapchat

34) One World bracelets…After going to all the tent parties to sample the food (the chocolate pretzels and bread with pesto were real good), we decided to leave the parties (because dancing + way too loud music + dim lights = not our scene) and instead hung out with Elissa! She made us tea in a bowl (because her kettle was not big enough), and then we all worked on art stuff for our final projects, listened to Elissa’s angsty playlist (which was really quality), and talked about academic dilemmas and career struggles.

35) WAITTRESSSSSSSS… do we need to say more?

37) Borderline’s various flyers throughout this year

39) Corgi/sense8 themed present we made for Karen’s birthday (p.s. super hyped for the Sense8 finale!) 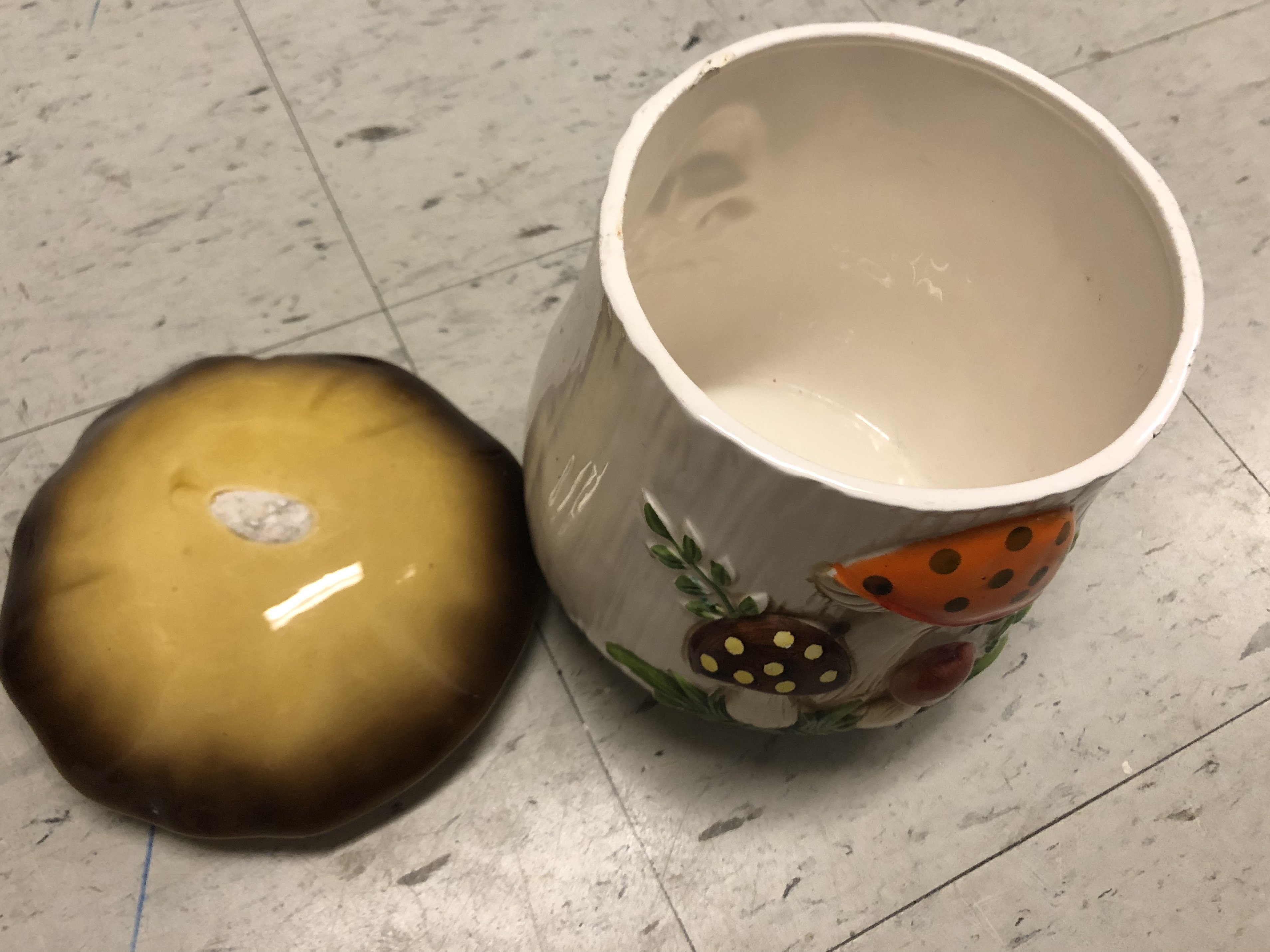 our Memory Mushroom is empty now, because we transfered all of the sophmore things to our buzz bag