Our Room (formerly, THE Sal Khan’s Room) is Being Converted into WiFi! by Danny and Allan G. '20

It all started one day in the fall semester, when Danny was in CMS.100 (Intro to Comparative Media Studies). The professor handed out teacher evaluation forms and left the classroom. Around the same time, an email got sent out to the both of us and to two others who live in a double on the third floor of Next House, specifically in Safety Third (the counterpart to our wing, Danger Third Rail). One of the two in the Safety Third double happened to be in the same CMS.100 class as Danny. As soon as the professor left the room, she turned to Danny and said, “Did you get the email? Our rooms are being turned into WiFi!”

Welp…here we are, 7 months later and in Florida, already parted ways with our room of 3 semesters, making this blog post about how, indeed, our double is one of two on the third floor in Next House being converted to some tech stuff to improve the Next House WiFi (that we never thought was bad in the first place?).

Though it probably sounds like we are or we should be, we are actually not too salty about this, since the awesome Housing Chair and President of Next House helped us a lot during the Housing Lottery process this year to ensure that we will be able to live in a different double in 3E next year!

So, to reiterate the tagline of this post, we really just find this situation amusing and are making this post “just for the title.”

Because, according to dorm legend and confirmed by this commencement speech, our room is actually where Sal Khan lived during his time at MIT! Can you believe, we have the honor of being the last people to live in the room that housed such a success? 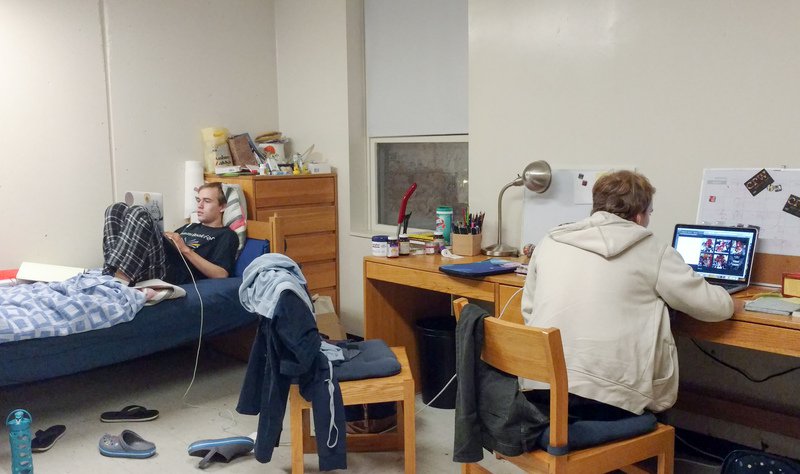 us in a big mess

t b h this is nothing 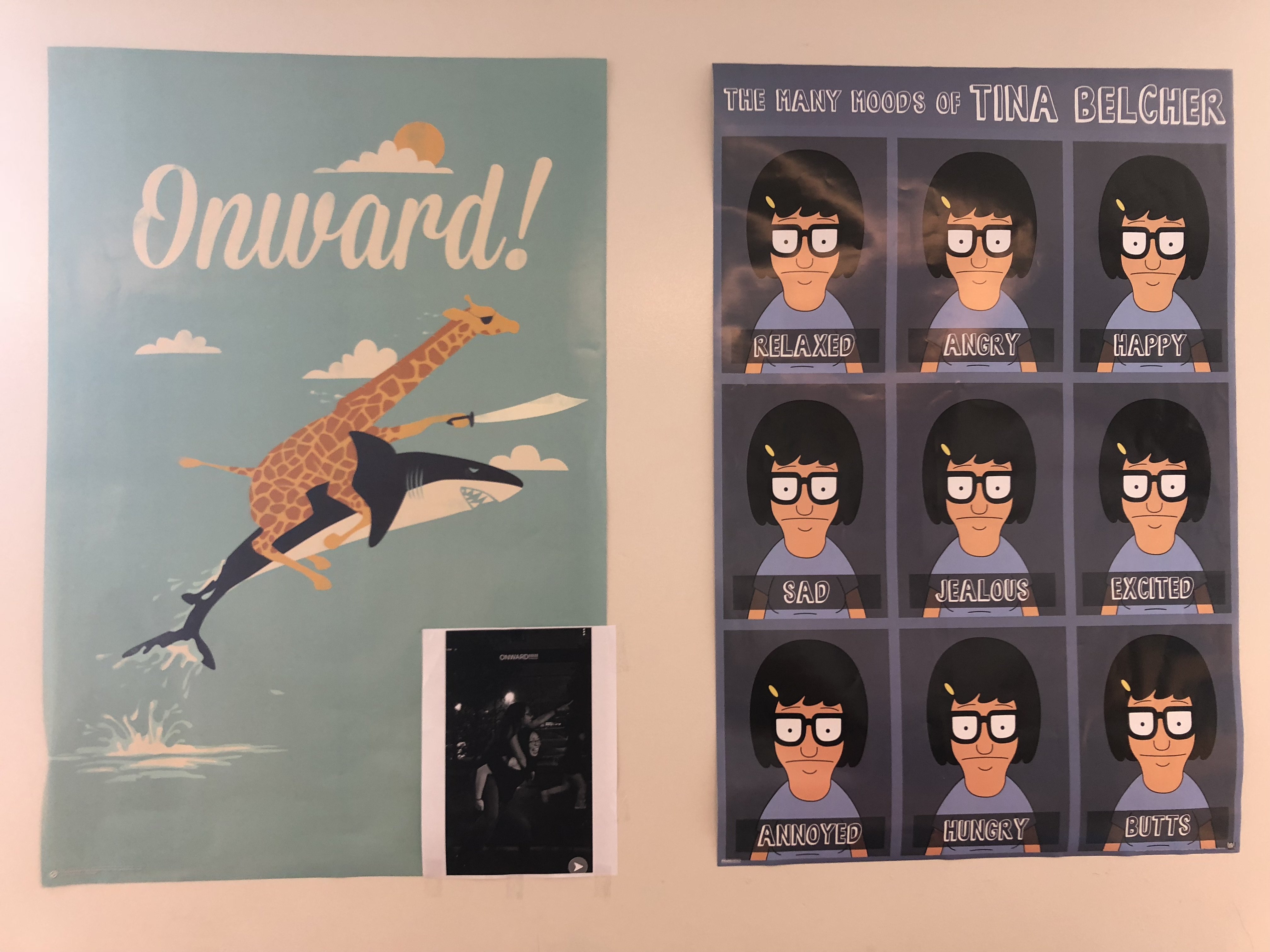 Posters our friends Karen C. ’20, Nia M. ’20, and Katherine C. ’19 got us for our birthday! Pay close attention to the bottom right corner of both posters.

The bottom right of the right poster is just iconic. If you watch Bob’s Burgers, you get it, and if you don’t, we highly recommend that you do, for no other reason than to understand why both Tina (the character in the poster) and the poster itself are iconic.

The bottom right of the left poster needs more explanation, and some context. Context first. Every year since three years ago, MIT throws Tent Parties in May. Tents get set up in various locations around campus, and each tent is equip with live music performances, a dance floor, and tons of really good food. A lot of people look forward to them, and rightfully so. They are, as the kids these days say, “lit.”  This year, the tent parties happened shortly after our birthday, so we had just received these majestic posters. On our way to the tents, Karen randomly decided to jump on Katherine’s back. And we all immediately realized that this was a perfect opportunity for them to pose as the giraffe and shark. So they did, we snapchatted it, and saved it.

Now, explanation. We later printed that snapchat, and posted it on our wall. We did this because by the end of this semester, we were loosing a lot of motivation to work on our final projects and to study for finals. We thought that seeing a picture of our beautiful friends imitating an aquatic pirate giraffe sailing the dangerous seas on the back of a fierce shark yelling “Onward!” would be EXACTLY the motivation we needed. We were correct. Truly, it’s what got us through the end of a really rough semester. 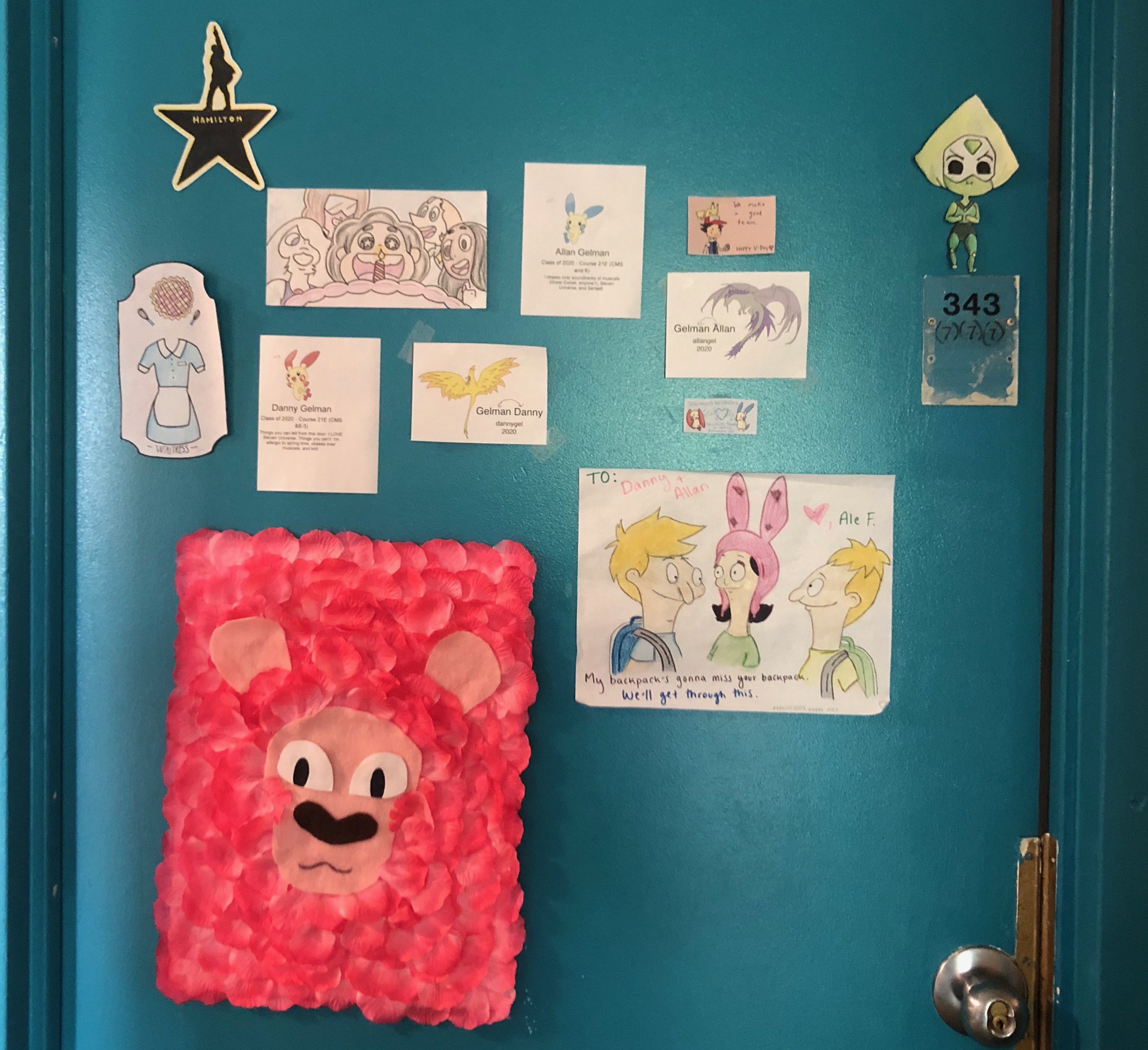 and this is our door, which slowly became more and more decked out with our media obsessions as our time in this room went by