And what I gained after a semester at MIT

I have something of a love-hate relationship with 2015. Last year was defined by its discontinuities. The first half of the year was spent trying not to fall asleep in my last stale months of preparatory schooling. The second half of the year I was thrust into a new, thriving, churning environment, and I’ve been trying to soak in as much of it as I possibly can. So much of my life has been overhauled this past year that it feels like I’m on a completely different path than I was last January.

Most of you are probably wondering where you’ll be a year from now; considering that you’re reading this blog, that question will probably take the form of where you’ll be attending college. In reality, that is such a small part of the question.

A year ago, I was where a lot of you are now. I was a very impatient second-semester senior who had just finished all my college apps. Mentally, I had long since left high school behind and my attention was trained on fall of 2015. For me (like I think it is for a lot of students) high school was a relatively straight path. I knew I was going to college. I focused on my academics and used my free time productively. Though I did not see college as an end-all-be-all, it was still sort of a blinding goal, a safety net for things that I wasn’t satisfied with in high school. A year ago today, I knew basically what my immediate future would look like. In a year, I would be in college. I would be exposed to more challenging classes, a more varied group of people, a livelier social scene, a wider breadth of opportunities, an environment where I would have more chance to reach my fullest potential. To paraphrase a favorite song, it had been a long December spent polishing essays and hitting submit buttons, and I had reason to believe that the coming year would be better than the last.

College can be a blinder. It can screen you from looking too far into the future, to what happens after you show up at the school of your dreams.

It’s really enlightening realizing how my perspective has completely changed in one short year. Right now, I’m not confronting such a significant single decision as choosing a university. But I’m facing a lot of questions that are much more ambiguous and even more important. What do I want to major in? Am I set on Computer Science? What else should I be exploring? What jobs should I be looking at? Do I even want an employer, or should I be starting my own company? What kind of company? Also, now that sewing isn’t as accessible to me, and given the huge variety of activities offered at MIT, how do I want to spend my free time? How do I want to present myself to other people? What am I capable of? In short, what do I want my life to look like, and what kind of person do I want to be going through it?

Answering questions like these is the work of a lifetime. It is difficult and stressful and certainly seems overwhelming at times. But it is also a glittering opportunity. Students at MIT—me included—are incredibly blessed in that we are perfectly poised to answer any of the above questions in any way we want. We have the academic flexibility to dive into any field that inspires us, not excepting the most challenging and innovative disciplines in the modern world. And we have at our disposal the resources to pursue any goals we tenaciously set for ourselves.

The coming of the new year made me reflect on what a semester at MIT has meant to me (aside from a lot of new questions). I arrived at a few important points.

In high school, I was, like a lot of you, an academic perfectionist. When I took a test, I was used to knowing the answer to almost every question. If I had to deduce the answer or arrive at it circuitously, I felt like I was being sneaky or clever.

MIT has smashed that academic philosophy. At MIT, deduction, inference, and critical thinking is not a second-resort trick, it’s the name of the game. Memorization is secondary. A lot of classes give you liberal equation sheets on tests or let you make your own cheat-sheets. In the mandatory intro bio class, instead of having to internalize the structure of an amino acid side-chain, you might be given a diagram of all the possible side-chains and asked which one would allow a substrate to bond to a particular enzyme.

And for good reason. There is way too much knowledge in the world to ever be able to memorize all of it. Professors know that in a practical setting, a real biologist (or even a student with wifi) will have access to basic facts about a discipline. MIT teaches you how to apply relevant knowledge and how to solve tricky problems. Now, I don’t feel like I’m thinking unless I have to make some sort of leap.

College is a fresh start. It is a chance to reinvent yourself, which is a powerful and precious opportunity.

For instance, when my dad went to school, he essentially changed his name; he started going by his middle name. My own silly example: before moving into MIT, I went shopping with my mom for some new shirts and ended up purchasing the loudest, brightest, most seizure-inducing pair of wide-legged, tribal print lounge pants you have ever seen. In my dorm, I wear them constantly because they are comfy and awesome. I have since added a couple more sixties-inspired pairs to my collection and have developed a reputation. Now, crazy pants are my thing!

Coming into MIT, I decided that I was going to be a friendly, positive person. I’m more social and more cheerful here than I was in high school. I used to think I was completely non-athletic; now I’m really enjoying my P.E. classes and working out regularly. I’m even planning on joining the dance team next semester (no experience required, thankfully!).

I think that before showing up to college, it’s important to think about who you want to be personally as well as academically.

It’s no secret that MIT can be a high-stress environment. Classes are hard and there is a lot to take advantage of beyond them. Plus, everyone around you is incredible, creative, motivated, and intelligent, and you know that you have the potential to be just as much of an earth-shaker. There is a lot of pressure (rightly so) to accomplish amazing things. And as a college freshman, I have very little idea what those amazing things are going to be.

Arriving at college has definitely raised the bar for me. But the mentality that you have to simply “be amazing” is overwhelming and, frankly, unconstructive. The most productive thing I can do is to focus on pursuing those opportunities I have in front of me and taking advantage of where they lead.

After spending a semester at MIT, I can definitively say: college, even MIT, is not a miracle-worker.

As finals approached and second semester came to a close, I had a similar conversation with a lot of my friends. “I can’t believe the first semester is over!” we would commiserate. “I can’t believe we’ve had a whole semester of MIT! Shouldn’t we be building rockets by now or something?”

Even though I know I’ve changed a lot since the beginning of 2015, I don’t feel radically different. That’s because no college is going to magically transform you without your consent. What I get out of MIT is a product of the work I put in. Everything that I accomplish (or don’t) comes from my own decisions and motivation. MIT provides resources for its students to accomplish amazing things; but it is our responsibility to take advantage of those resources. The students make the school; the school does not make the students.

2015 brought me new opportunities and a plethora of new questions. My New Year’s Resolution is to form an answer, a preliminary one, to those questions, so that next year I can feel proud of what I have accomplished in 2016. 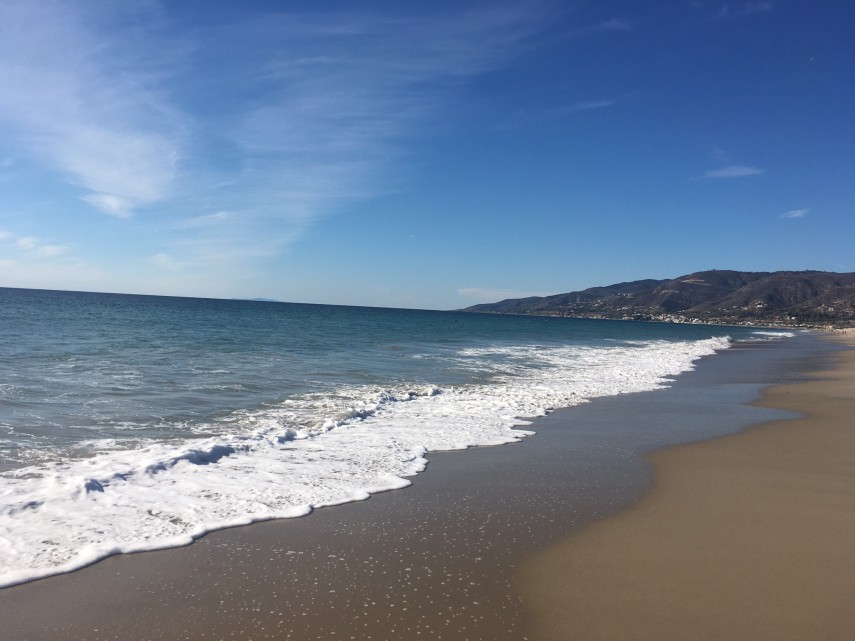 Where I spent my New Year’s Day. California beaches: what I will miss most during IAP!