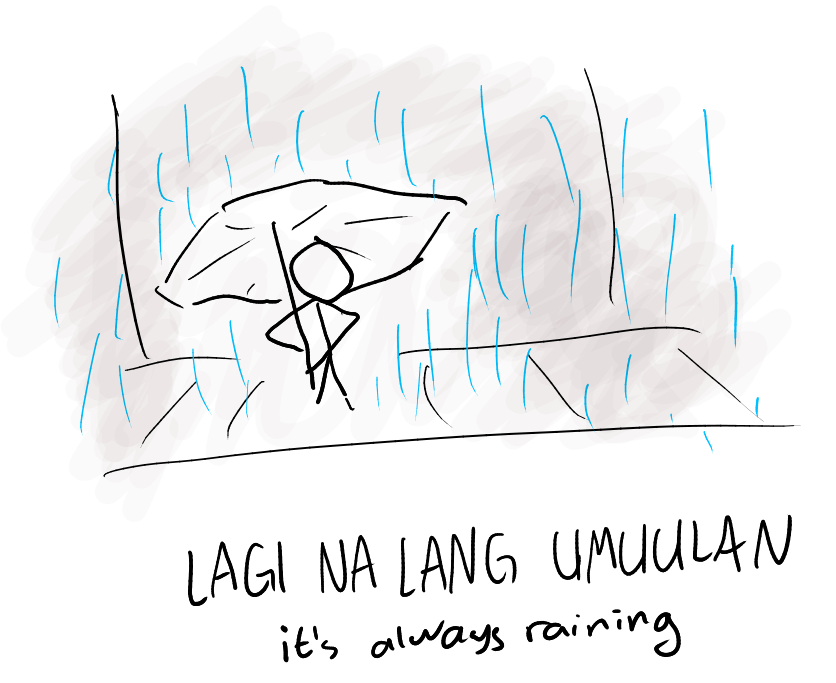 Ambon. The Philippine languages have a rich vocabulary for rain. The lightest is probably ambon, a shower, a drizzle. Ambon is the kind of rain that a light jacket would be enough for. We might describe the weather with pumapatak, or dripping. There’s even a word for the small droplets that fall through an open window, ampiyas, and the action is umaanggi.

Where I’m from, the dry season ends around May, and the rainy season ranges from maybe June to October. Overnight, the winds would abruptly switch from amihan to habagat, from the northeast to the southwest monsoon. Habagat brings in hot, humid weather, and frequent rainfall. The coming of the rains also signal the beginning of the academic year, as the Philippine school year starts in June, not August or September.

The rain I’ve experience back at home is quite different from the rain here. Back at home, if it does rain, it will rain for a few hours. There’d never be really really light rain; there’d always be felt droplets, and even the lightest of rains would be felt if you didn’t have shade. In Cambridge, there are some rains that feel like a mist, where the whole day there’d be this moisture in the air, not quite dry, but not quite rain. Tagalog does not have a word for this kind of rain, at least, not that I know of.

I remember the first time I experience this kind of rain, I had this mental disconnect. Any moment, I felt, it would begin raining and pouring. But it never did. I didn’t have a word for that kind of experience, and that lack of concept—that lack of a mental handle—felt more annoying than the weather itself. 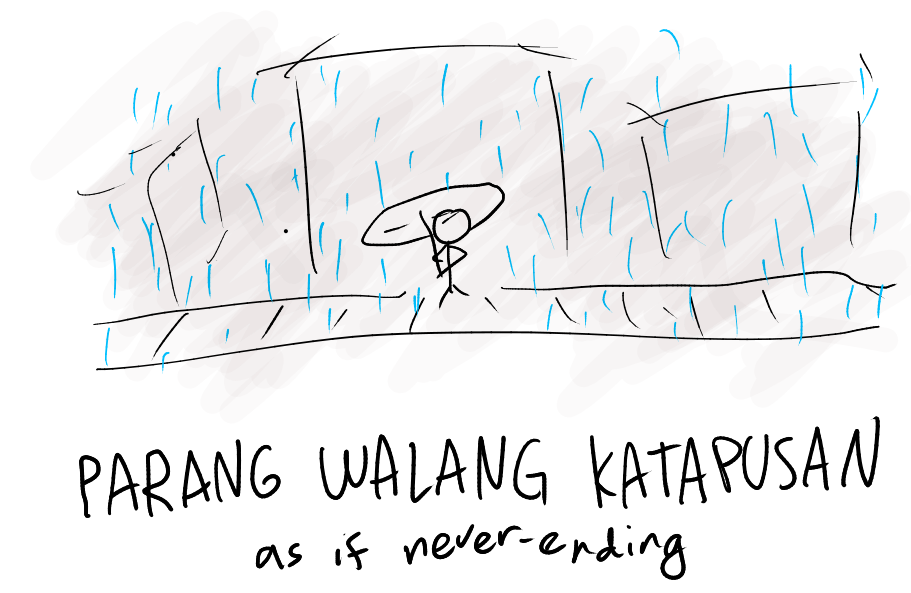 parang walang katapusan (as if never-ending)

Ulan. The catch-all word for rain is ulan. And the pattern for ulan is, as I mentioned earlier, a brief period of rain, and then it stops for a while, before raining again. When you get caught without an umbrella, a common practice, then, is magpalipas ng ulan, or magpatila ng ulan—to wait for the rain to pass. You wait an hour, and the rain will probably let up, light enough to go through.

Because that was the nice thing about the rain, back at home. There was this implicit, cultural-level consciousness, that even if it rains hard, as long as there wasn’t a typhoon or anything, there’d be a guarantee that it’d pass. This concept of the rain has pervaded Tagalog metaphor, and given us sayings like pana-panahon lang or weder-weder lang. The refrain is a common response to the troubles in life, comparing problems with the weather, as something that comes and goes.

In English, maybe the closest idea is “this too shall pass”. But that doesn’t carry with it this implicit comparison to the rain. Maybe the closest thing is how, in those really old cartoons, there’d be people depicted with a rain cloud following them around. This is in some sense the ultimate subversion of pana-panahon lang. A rain cloud above your head persists. It’s never enough to be unbearable, but it’s always a nuisance. You can go for weeks, months, years of your life, even, without ever noticing that other people don’t have rain clouds above their heads. The thought of living life without having rain all the time becomes foreign, becomes hard to believe. But there are people, and a lot of them—there are parts of the world, and a lot of them—where the rain does stop. And you’d just never know, because you’ve never experienced it. 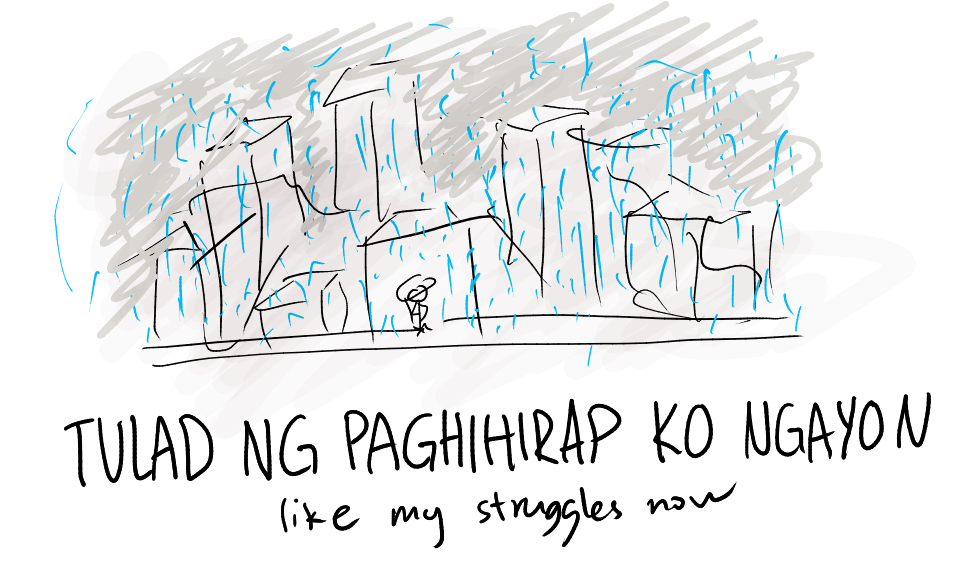 Unos. The word unos means a squall, or downpour. It’s heavier than rain, although perhaps not as heavy as a typhoon.

Strong rains bring with it a certain sense of mysticism. Sudden rains on a sunny day happen when may kasal ng tikbalang, or when mythological creatures known as tikbalang would get married. People would sometimes get teased for bad singing, saying that it invites rain, with the heavens crying out in pain over singing out of tune. Getting rained on, naulanan, causes sickness, often colds.

Lots of songs have been written about the rain, with rain usually being a metaphor for sadness, or otherwise strong emotions. Aegis’s “Basang-Basa sa Ulan” has the line Heto ako, basang-basa sa ulan / Walang masisilungan, walang malalapitan; here I am, drenched from the rain, nowhere to find shade, no one to approach. One of my favorite songs is Cueshé’s “Ulan“, which is, of course, a break-up song. Iniwan mo akong nag-iisa / Sa gitna ng dilim at basang-basa pa sa ulan; you left me alone, in the middle of darkness, drenched in rain.

There’s this impression of rain being a solitary experience. No one sings about being in the rain with someone else, because rain is always isolating. Being dripping and drenched and covered in dirt drives you to seek shade and be with others. But if you want someone to help you, you’re stuck in a Catch-22. Because no one wants to help when you’re dripping and drenched and covered in dirt. 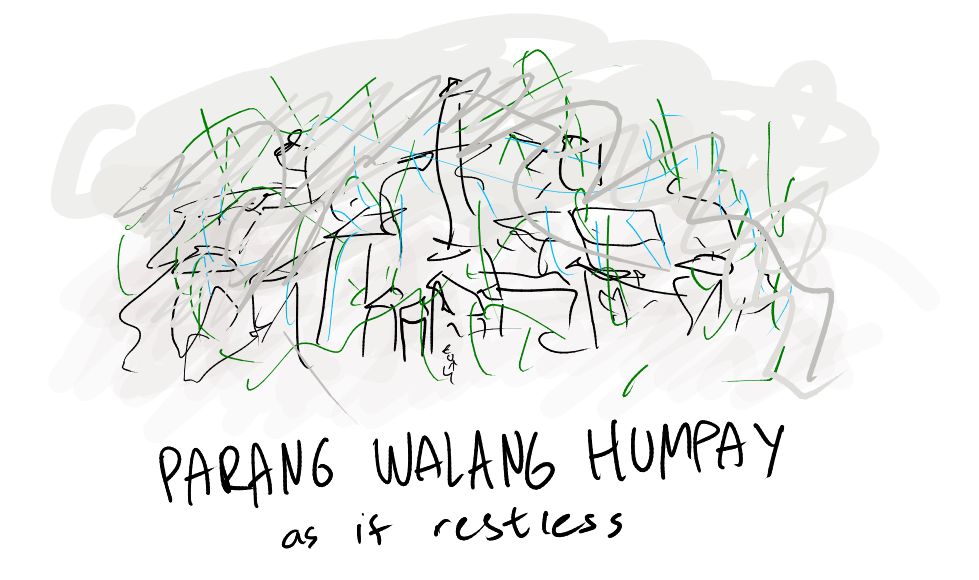 parang walang humpay (as if restless)

Bagyo. What the world called Typhoon Haiyan, we called bagyong Yolanda. Typhoons in the Philippines have a local name, different from its international name, with typhoons being named alphabetically after names of people. PAGASA, the government meteorological agency, goes through a list of twenty-five names for typhoons each year, retiring names of notable ones. Milenyo, Ondoy, Pepeng, Pedring, Katring, Sendong, Pablo, Yolanda, Glenda, Ulysses. Ask anyone who’s lived in the Philippines for several years; they’ll recognize some of these names, if not all of them.

A typhoon, back at home, was something that happened, and something we prepared for. When a typhoon would come, we’d all know the name, when it’d make landfall, where it’d be centered. PAGASA would issue storm warning signals, ranging from Signal Number 1 to Signal Number 5, which are based on the maximum sustained wind speed. Different signal numbers would be raised in different places, and certain numbers triggered automatic suspension of classes. Perhaps a week or two of classes would get canceled over the course of the school year due to typhoons. It was just something that happened.

On the other hand, after having lived in Cambridge for two years, the only named hurricane I remember is Hurricane Henri, which is currently going over New England. It’s different, here. Very different. 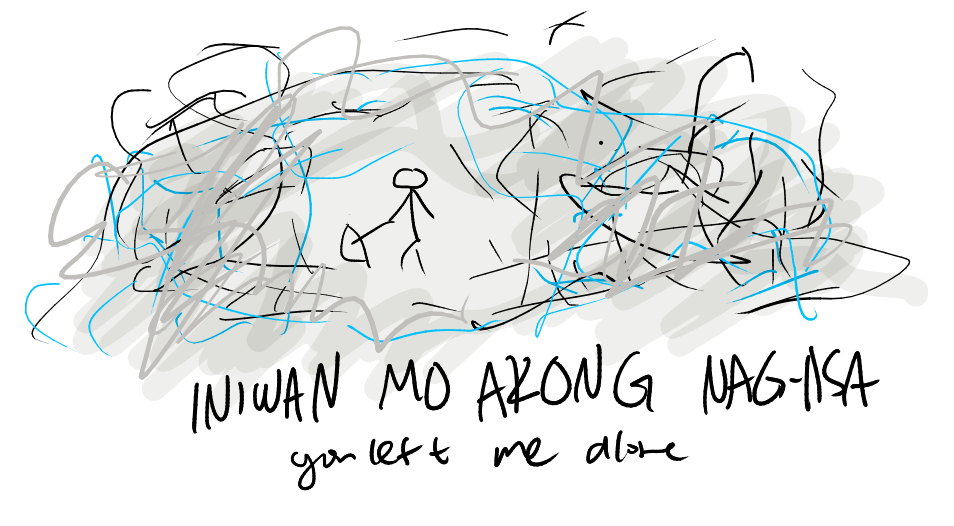 Daluyong. Daluyong is one of the more obscure words, which I think means storm surge. It’s in line with sigwa, a violent storm, for being one of those Tagalog words for really bad weather that you hear in literature and art but not really in practice.

My strongest associations with “storm surge” is with the damage caused by Yolanda. I remember seeing videos of waves going four, five meters high, swallowing coastal buildings whole. A lot of the damage of Yolanda wasn’t because of extreme wind speed, but because people were insufficiently prepared for the dangers of fast-rising waters.

It’s still depressing to think about this. It feels like if the wind won’t get you, the floods will. If your roof doesn’t get torn apart, then your floors will get wet. The Tagalog word for flood is baha, and the height is traditionally measured in body parts. Baha hanggang tuhod—up to the knee. Baha hanggang bewang—up to the waist. Baha hanggang leeg—up to the neck. All phrases I’ve heard, at one point or another.

It terrifies me to imagine water rising, slowly building up, up my knees, my waist, my neck. An unrelenting flood that will drown me if I don’t stay afloat. When the winds stop and the floods recede, it’s only the survivors who get to say pana-panahon lang. 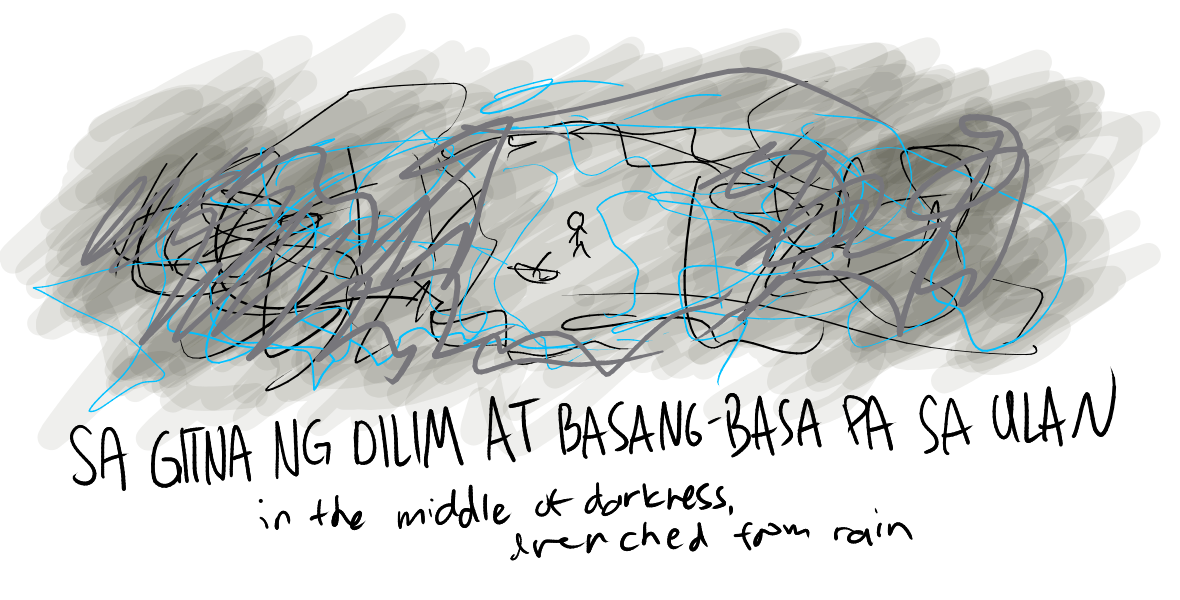 Sigwa. Sunny days are in the forecast this week. Pre-frosh and frosh have come, and are coming, to campus. Slowly the summer will end. It feels as if the hurricane will herald a turbulent fall semester to come.