a guide to my room in Simmons

Since the end of August, I’ve been living on-campus in Simmons in a double. My room is huge, and I have two sets of furniture, which really means I have two desks. I’m taking two classes this semester with take-home labs (2.678: Electronics for Mechanical Systems and 16.851: Satellite Engineering), so I converted one of my desks into a lab bench: 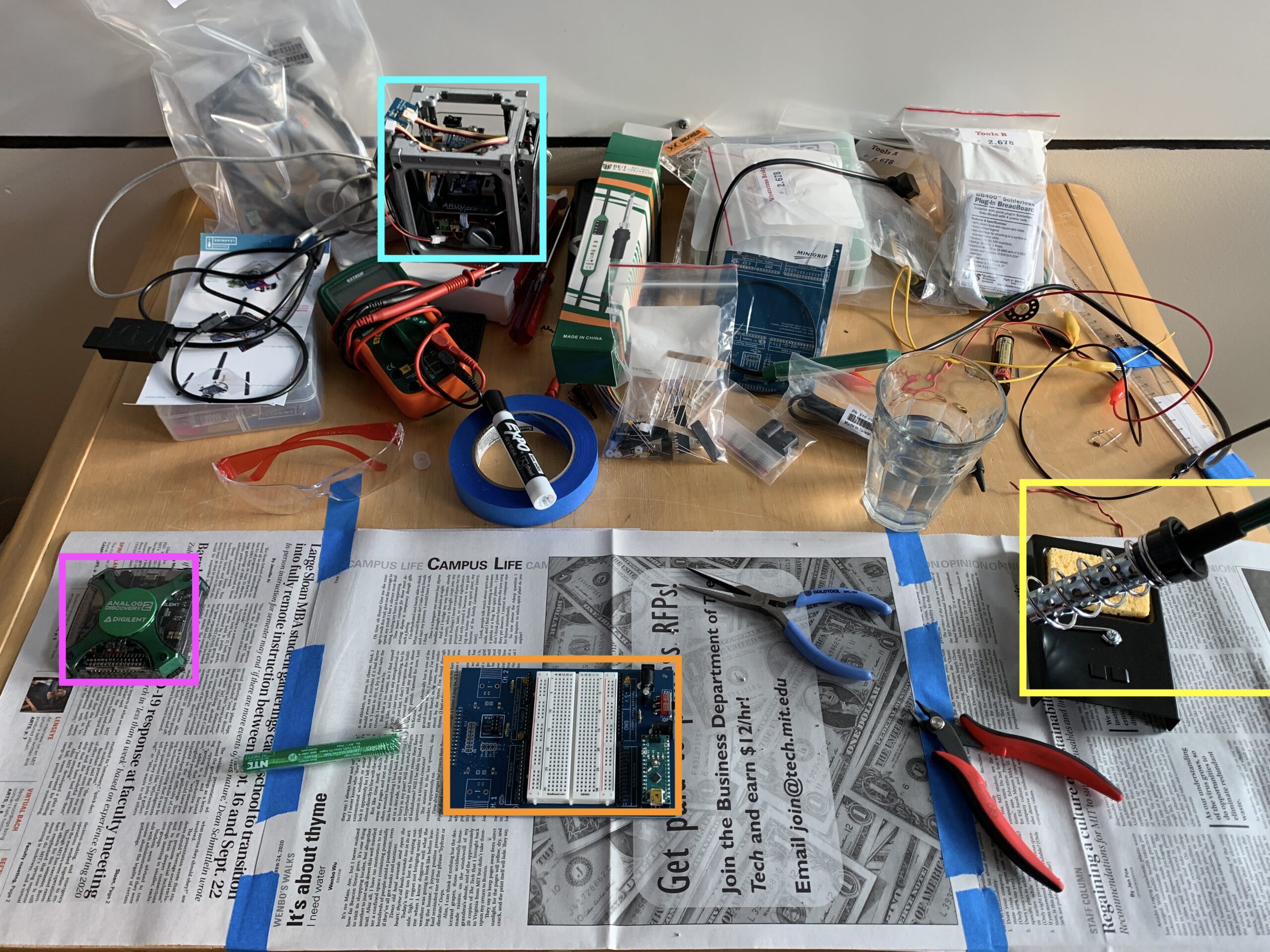 When I took this photo, I was halfway through the second 2.678 project, which involved soldering a bunch of components to a PCB⁠01 printed circuit board that the professors designed. Somehow, the Tech is still getting printed and distributed to the dorms, so I was able to use old newspapers to set up a safe soldering surface. Almost all of the equipment in this photo is for 2.678, including the soldering iron on its stand (in the yellow box), the half-soldered PCB I was working on (in the orange box), and the Analog Discovery 2, a nifty device that can be used as an oscilloscope and waveform generator (in the pink box). 02 basically, it can be used to generate voltage signals with the waveform generator and then measure different voltage signals with the oscilloscope At the end of 2.678, I have to return the Analog Discovery 2 and the soldering iron, which I’m pretty sad about, so I’m looking into getting electronics equipment of my own.

In the very back of this photo, in the light blue box, is my DemoSat for 16.851. The DemoSat is a 10 cm^3 non-space-qualified satellite, so it’s essentially a box with an Arduino, some solar panels, some sensors, and a couple of other components. The 16.851 lab assignments have been pretty open-ended (think “measure and explain some variable that affects the quality of the communications link between the DemoSat radio and the other radio in the lab kit”), which has been a really cool way to explore how satellites work at my own pace.

I love my lab desk, but I actually don’t spend much time there. The 16.851 labs often involve creative use of home space, so I take measurements with my DemoSat in the fridge, or against a ceiling light, or outdoors, not usually at the lab desk. I also have normal MIT lectures and psets, so I spend an unfortunate amount of time at my other, more traditional desk: 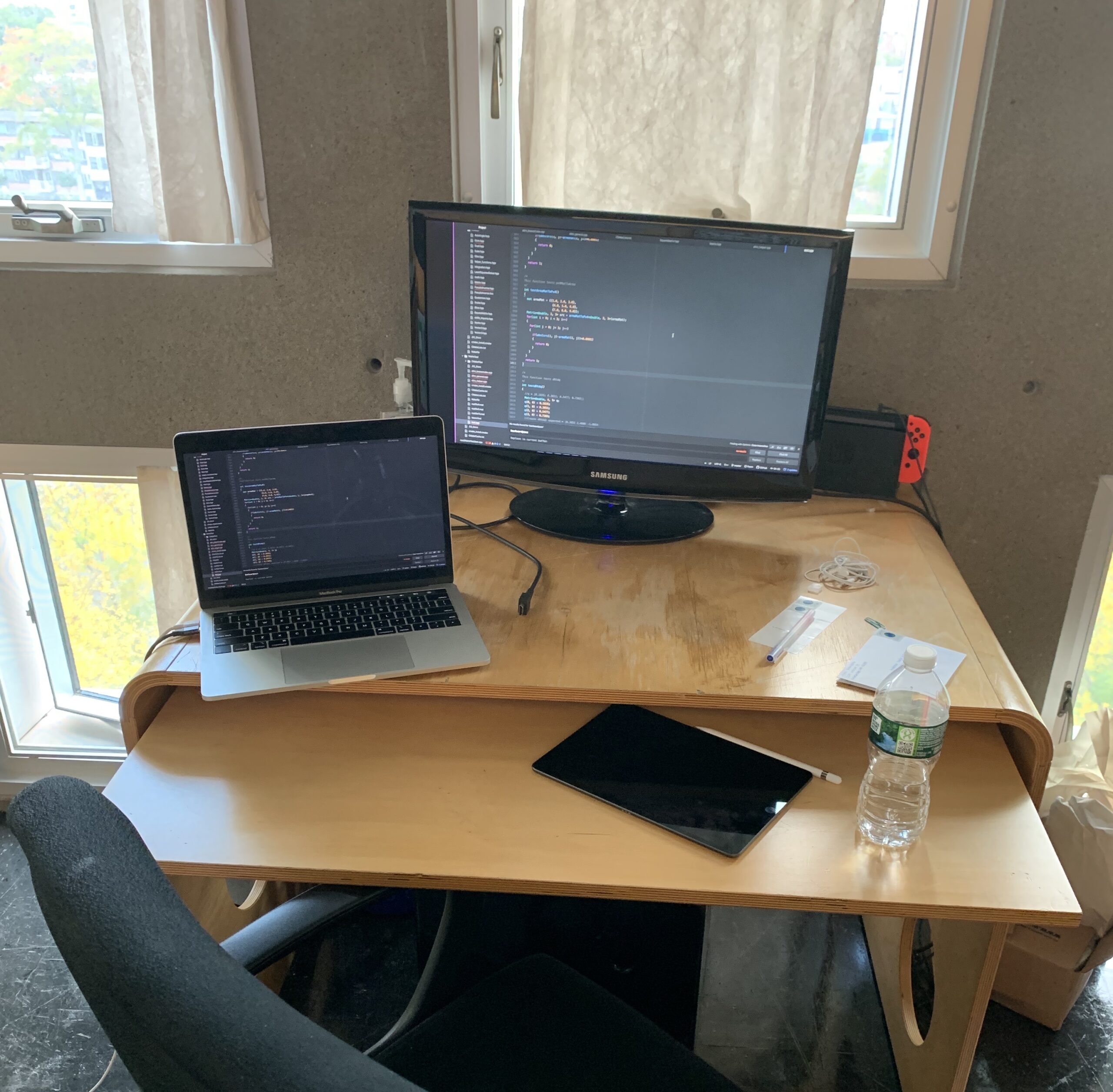 Serendipitously, I borrowed a pretty large monitor⁠03 from my girlfriend's parents' basement, which honestly rivals the Stata loading dock in terms of random and salvageable technology for this semester before I realized I would have two desks, which has been really nice to have for my class/entertainment (read: Zoom/Neflix/Switch games) area. It’s probably a bad idea to attend classes on a monitor that I also use as a small TV, but I attended class from bed last March-June, so this honestly feels like an improvement in separating “work” space from “life” space.

It feels weird and bittersweet, but I’m slowly packing up my desks in preparation to move out of Simmons this week. I’ll be staying in my parents’ house in Seattle until the end of IAP. My brother, who is a ballerino, has been using my bedroom as a dance studio in the evenings. I got a really nice desk that moves up and down between a normal sitting desk and a standing desk over the summer, so maybe I’ll recreate my setup there, or maybe I’ll move it outside of my brother’s makeshift dance studio. Either way, I’ll miss the ridiculous luxury of having two desks all to myself, and I’ll also miss living on campus.