Several classes I’ve taken at MIT use a platform called gradescope for assignment submission and grading. I like gradescope more than other online-submission platforms I’ve used. It comes down to the grading system, which features:

I ended up using the regrade request feature quite a bit. My pset buddy for 6.042 (Mathematics for Computer Science), fellow blogger Shuli J. ’22, rarely used it. We kept getting graded differently for questions where our answers had essentially the same content. It was annoying at first, but became funny as it happened over and over again. There are a ton of pset graders, so we hypothesize that the discrepancies were just due to different graders. To sort it out, I had to make regrade requests.

In this blog post, I’ve analyzed these regrade requests. I examine what the my requests and the graders’ responses looked like, my success rate, and more.

i. What were the regrade requests and responses like?

I took two classes in Fall 2019 for which I ended up submitting a total of 26 regrade requests on questions from both problem sets and exams. The classes were 6.042 (Mathematics for Computer Science) and 18.06 (Linear Algebra). I liked both of them. 6.042 felt like a trip around a “mathematical zoo” where I got exposure to a lot of topics in math which I hadn’t encountered before. I also made some friends in office hours. 18.06 was pretty chill and it was nice to feel myself making consistent progress week after week.

Some requests were very straightforward. In these cases, it seemed the grader had just misread my response, so I would just clarify the situation and the grader would fix it. Here’s an example from 18.06 where I got all my points back:

Request: Hi, I’m writing to request a regrade on Problem 1.2. I got points off for my basis, but my vectors w_1, w_2, and w_3 exactly match those in the answer key. Thanks for your consideration.

Response: Hi, sorry for my mistake. I’ve returned your point.

Other requests were less straightforward. In most of these cases, I was asking for my response to be considered for more points when I acknowledged that it was mostly incorrect. These were less successful. Here’s an example from 6.042:

Request: I show the sum converges; I believe I lost points because I did not explicitly state it, but in the instructions it says that “a short computation” can suffice as an explanation. I think I should receive at least partial credit for my explanation.

Response: Okay; partial credit is given but your bounds are incorrect.

Here’s a visualization where I use word clouds⁠01 I would like to note that I still really do not like word clouds, despite my now repeated use of them. to summarize what I said in my requests and what graders said in their responses. 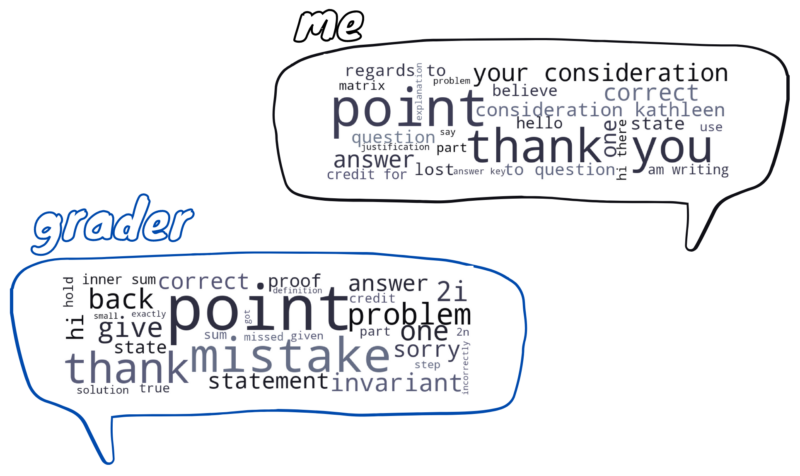 ii. When did I make regrade requests?

I tried to file regrade requests as soon as possible after the grades for an assignment were posted, since remembering the specifics of each question got harder as more time passed. Towards the end of the semester, I started doing really well in 6.042 as we covered topics I was familiar with and I stopped needing to make any regrade requests.

Gradescope doesn’t provide data about the time at which a request was reviewed and responded to by a grader. Using the data available about just the day each request was reviewed, I can report that there was a median of 0 days between making the request and getting a response. I got responses pretty quickly!

iv. Were my requests successful?

The requests were successful, overall. The majority of the requests (61%) resulted in points being added to my score, helping me achieve either full points or increased partial credit for a given question. 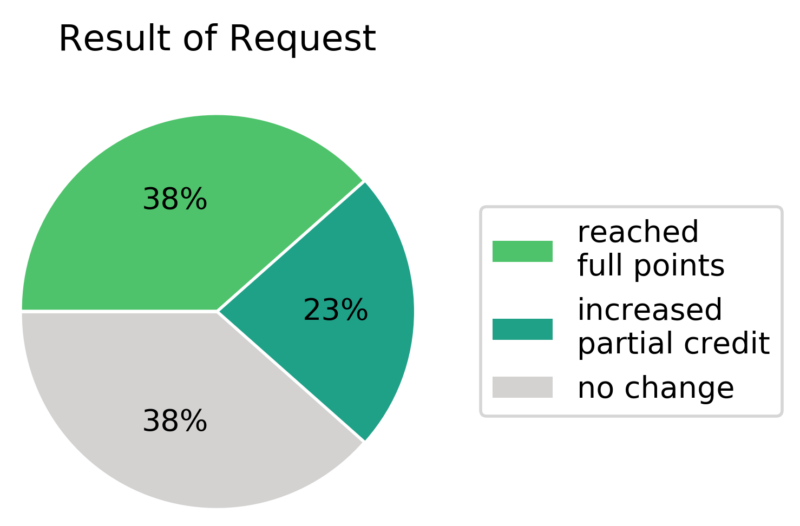 The story is pretty different for each type of assignment, as shown in the plot below. There were two main types of assignments: problem sets and exams (including both midterms and final exams). My pset regrades were very hit-or-miss: either I reached full points or the request was completely denied and my grade didn’t change at all. Meanwhile, for exams, it was rare for my request to result in me getting full points for a question, happening only 13% of the time. 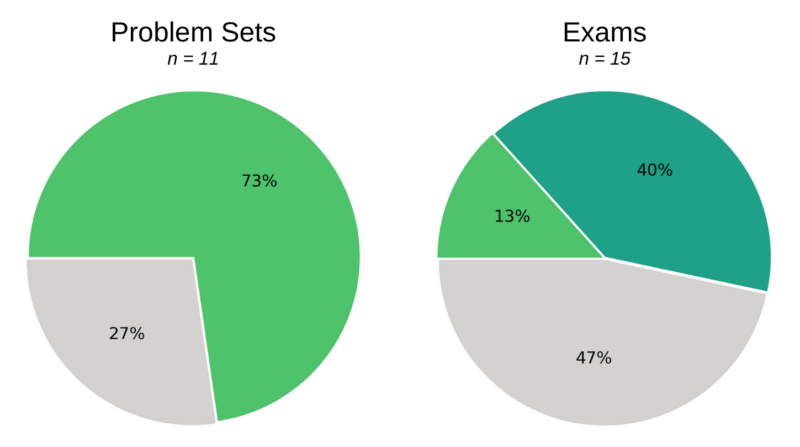 v. Was it even worth it?

This is something I ask myself a lot at MIT, about many different things. Luckily, with regards to making regrade requests, there’s data that can be used actually answer this!

The questions for which I requested regrades varied a lot in how many percentage points they contributed to the assignment. The smallest number of percentage points I fought for was 2.2 and the largest was 20. Of course, 2.2 points on an exam is worth a lot more to the final grade than 2.2 points on a problem set, but I ignored that for this section of my analysis.

In the plot below, I looked at the percentage point values of the questions for which my regrades were “successful” (defined as when some points were added to my score), split by assignment type (pset or exam). In total, all of these regrades did help me earn a lot of points back. However, adding 5% to a problem set worth 2% of my final grade doesn’t seem “worth it” in retrospect and I likely I could have skipped those types of regrades and ended up with the same letter grade. 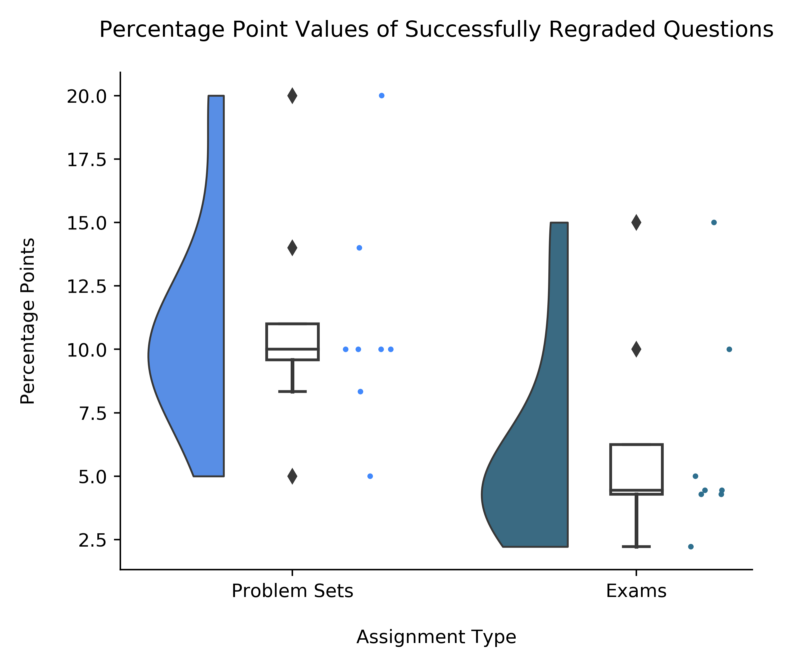 This is not a perfect comparison, because Shuli and I definitely didn’t always have the same answers, but it just goes to show that experiences with regrade requests can vary widely from person to person!