residential exploration, but without a residence by Ankita D. '23

if you’ve read any of my blogs, you know that i’m a former resident of Burton Conner, a dorm that is currently under renovation and will be until Fall 2022. i am currently living in East Campus, but i spent the past two weeks running REX⁠01 residential exploration as a representative of my Burton Conner community, the Burton Third Bombers. it was a tumultuous and fulfilling experience in spite of numerous roadblocks, last-minute location changes, and freshmen who had never even heard of Burton Conner.

REX, which was from August 29 to September 1st, is the period where freshmen get to meet and join living groups they’re interested in. finding new friends who mesh with our community aside, as a community with over 50 years of history, meeting freshmen who are excited about our history and traditions is crucial to sustaining the culture we cherish. it’s especially critical given that COVID and the dorm renovations have disrupted our traditions⁠—we want nothing more than to move back into Burton Conner in Fall 2022 with three classes of Bombers who can help keep the culture going.

normally, the 50-some members of my living group would be in Burton Conner to help run floor events and meet freshmen from all over the dorm. this year, however, the members of the floor are scattered across the Cambridge/Boston area. some of us are moving back to campus, mainly to the dorm East Campus, but the rest of us have been living in apartments since the start of the pandemic. we aren’t able to gather as easily as we once could, and floor events would be taking place in spaces on campus rather than right outside our room doors.

REX was one of the most incredible experiences of my freshman year. i was so excited to be on campus that i seized every opportunity to be social that i was presented with. i stumbled upon the Bombers, started going to their events, and fell in love with how supportive and fun the community was. i ended up joining the floor, sticking with my class of Bombers through quarantine, and becoming a floor chair, or someone who holds the responsibility of keeping an entire culture together despite not having a dorm anymore.

as a floor chair, i was one of two people who ran REX events, which was a tremendous responsibility since, well, we’ve never not had a dorm to host events in. i also only ever experienced in-person REX from the side of being a freshman!! the last time i went through this process, i had just gotten to campus and was enjoying getting swept up in the excitement of finding a living group i vibed with. this year, i would be planning and budgeting events and galvanizing people to attend them. i very little clue how things were run, but was now responsible for making REX happen.

locations were the first hurdle. Burton Conner exec members met with several space coordinators last spring to evaluate our options for hosting events, but not much came of the discussions, and we were left pretty stranded in the weeks before REX. we had hoped to reserve Kresge, ⁠02 the space next to the student center that lots of people walk through all the time but the orientation tent that’s set up there every year takes up the majority of space in the area. we were given a room in Maseeh as an option, in addition to Saxon Court, a tented space next to East Campus, and the Stata Amphitheater. these were certainly options, but they weren’t ideal since there isn’t a lot of foot traffic around them and were trying to get the interest of freshmen who hadn’t even heard of our dorm.

the next hurdle was event planning. i decided on submitting nine events for my floor, which was more than we’ve done in past years, but with less manpower. i wanted to do this many events since since freshmen are probably less inclined to attend events for a dorm that will reopen in a year and we needed as much attention as possible. Burton Conner in total hosted 42 events, which is pretty impressive and a damn good testament to how well our communities have stuck together in the past year and a half.

we restructured many of our historical events as outdoor ones since we don’t have our own space to host things anymore. this is unfortunate because we couldn’t host events like our “vertical fitness” one, which has been a hit for the past several years ;( 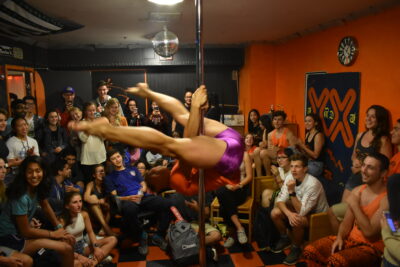 tie dyeing and the twerkshop were on this day. tie dyeing was fun, and quite a few freshmen pulled up to Saxon Court to tie dye random articles of clothing, but we didn’t get to engage with people much since we were so focused on the activity at hand. we also ran out of tie dye very quickly. the twerkshop was great, though—we moved the location to Kresge and a good group of freshmen joined to learn how to twerk despite numerous parents being nearby. i was impressed

we had harry potter fanfiction, no more table, and deep talks with shallow people. fanfiction went great as usual; we read My Immortal and everyone loved it since it’s a classic. i also pulled out some hidden gem fanfics that i had found by searching for the worst rated pages on fanfiction.net. solid.

no more table was as fun and quirky as ever even though its format had changed drastically from its initial form. it was a cross-campus scavenger hunt where Bombers took on different roles to direct freshmen to “the table.” i had a great time

deep talks with shallow people was held in a classroom, which was a little disconcerting considering how bizzare the event is, but it was still a great success. 30-40 people came, and wearing masks didn’t hinder the event at all.

hot ones with hot ones was slated to be held on Saxon Court, but i decided to move it to some tables on Kresge last-minute. it turned out to be a great choice since we got a lot of traction—what freshman doesn’t want to eat spicy wings?? mocktails followed it immediately after and was a hit as well.

it thunderstormed all day :( strange meats was cancelled since we couldn’t barbeque in the rain, and goose on the loose was brief and had only five participants. it was inevitable given the circumstances, though.

Burton Conner held FLEX, or floor exploration, which is usually the period where freshmen living in the dorm choose which floor they want to live on. since we don’t have a dorm, we held the event as an opportunity for freshmen to chat with our nine different communities. more than a hundred former Burton Conner residents gathered at Saxon Court and talked to freshmen for over two hours. the event was very successful!! dozens of freshmen came, expressed their interest in moving to BC, and talked to us for quite a bit of time. i was thrilled and more than a little emo to not only see a lot of people i lived in BC with, but freshmen who want to move into the dorm with me next fall ;–; 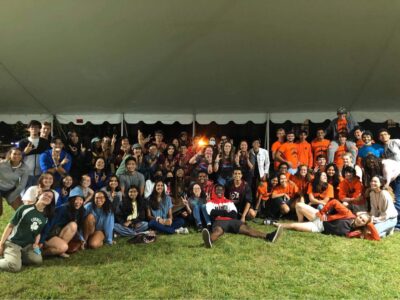 the former residents of bc!! catch me in the orange clump

we had the people who attended FLEX fill out a google form ranking their floors. much to our surprise, we received a ton of responses!! i was so happy to see freshmen vibing with our communities, expressing interest in affiliating with us through the year, and talking about moving back into BC with us.

after FLEX, i was absolutely exhausted; i met dozens upon dozens of people during REX, and bumped into tons of people around campus who i hadn’t seen in months. with a strong community to support me, lots of new friends, and BC’s reopening to look forward to, i’m nothing but excited for this year!!