“didn’t you already make a blog post about this?”

I retrained Robo-CJ to write haiku. This is coincidentally very timely, because as Shuli J. ’22 pointed out, today is International Haiku Poetry Day!

Also i need to
do my real analysis
homework by mistake

The details are rather much the same as last time. I took the model I previously trained on my old blog posts, and then used gpt-2-simple to retrain it on a bunch of haiku. So it still has some of that old Robo-CJ, but now it spits out things in vague pseudohaiku. Now where did the haiku come from?

I should be focusing
on making haikus, but I
have a lot going on
and I can’t keep up.

i have now watched five
hundreds of hours of anime,
many of which are now three
minutes

Alright, story time. Since the beginning of spring semester, I’ve been so, so ready for CPW, because I didn’t get to go to CPW when I got admitted, and I was so excited to see what it would’ve been liked. I would’ve helped run lots of events: the Filipino Students Association was supposed to come together and cook food together, the Assassin’s Guild would have run a quick game, and then there should’ve been Meet the Bloggers.

In case you haven’t already heard the news, CPW, which is this weekend where MIT invites all its admitted students on campus to find out what MIT is like, got canceled this year.

So that sucks. And I imagine it sucks more for all of you admitted students.

yeah i know, i can
edit: oops i was
wrong.

there is nothing wrong with
making haikus, and
listening to them when
they are sad

In its place is CP✱, a sort of CPW-turned-virtual, that Admissions and MIT students quickly put together in the span of a month. A month! That’s incredible turnaround.

I hosted an event myself last Tuesday, when I walked around campus while on a Zoom call. There were more than a couple technical difficulties, but I’m glad that I managed to pull through, thanks to the work of Wayne Z. ’23 and Theo B. ’23. It was a wild and terrifying and exhilarating event.

My favorite part of CP✱, so far, though, is the CP✱ Discord.

one quarter of undergraduates
are juggling multiple
tasks haikubot

It’s this pretty large Discord server, where all of the admitted students and some current students are invited to talk. The Discord has occupied a lot of my time since last Friday, when I started writing a bot called Jack. Since its opening last Tuesday, it’s now grown to over a thousand members, nine of which are bots, and one of them being HaikuBot.

HaikuBot counts the syllables in each message sent to the server, and if it matches the 5–7–5 pattern of a haiku, it reposts the message to its own channel, called the haiku log. The point is that it’s cool when someone unintentionally writes a haiku. But as you can imagine, some people just started writing everything in haiku: 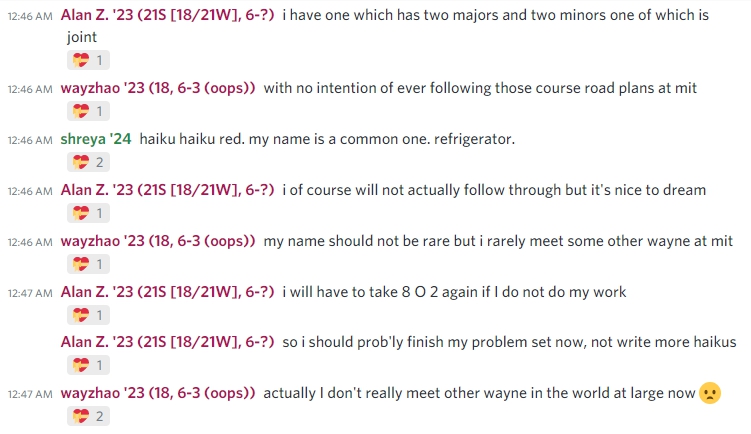 Since adding HaikuBot two days ago, the members of the Discord have collectively written over 1300 haiku. That’s about a rate of 30 haiku per hour. And whenever you have a large text dataset, the immediate response should be to train a neural network on it and see what it learns!

It’s pretty cool how Robo-CJ picked up roughly the correct format for a haiku. Most of its poems are 2 to 5 lines long, and each line has anywhere from 3 to 10 syllables. Among the first hundred haiku it’s generated, there were five that followed the correct 5–7–5 format. Which is pretty impressive, considering that we didn’t teach the robot that haiku had three lines with this many syllables.

Then again, if I randomly generated three-line poems with a couple words in each line I’d be bound to generate some haiku. But the neat thing is that some of Robo-CJ’s poems are sensible:

Alright, that’s enough intro from me. I collected my favorite sixty-ish haiku, which I’ll list below. I’ll end this with three last haiku, written by me, and not a robot:

hello admit! come join
the cpw discord
if you haven’t yet.

it’s really fun there!
the invite’s in your inbox.
please come and visit.

oh, and by the way,
i hope to see all of you
in meet the bloggers!

i hate haikubot
it can’t anticipate
my every motion

what to write about
only writing haikus for
the haikubot

I have so many questions
for this bot, if it was a
human I’d ask them

but haikubot
doesn’t really do haikus
it just waits

that is why i joined
the mit student body, just
because of haikubot

the gay heart
is made of many fruit
seeds

the real reason for
high school is the queer heart!

no haikubot we
support gay marriage

live and learn, then
we can all bee smart,
TSETSE FLIES

do not worry
about it all. it’s just
what is known as math
complexity

in other news, i
have 20(?) scheduled
to-do’s after tomorrow

i’m running out of time,
all my work is behind me,
maybe i’ll go sleep

i think i will
skip this test and do
real analysis

I have tried to
finish my problem set in the
fewest possible minutes,
but maybe there is more to
this problem set

i am sleeping now
but i should be
finishing homework.

many, many
people wrote me off as
not relevant or interesting.

I met with my raging
nerd crush in class today.
I don’t think he is real. Perhaps
he was created by a robot.

don’t worry so much.
you have a good head on your
hands and a good heart. just watch them.
they’re great at haikus

We have both moved on,
but I still wonder what
she went through back then.

there are many different types
of sadness in the world

I want to fall in love.
I want to be in love.
With a counselor.

we have built a bot that
talks about itself

i want to write haikus
about myself, but i can’t
because my parents think it’s weird

I really can’t count right
now. at the very least.

this is a broken
machine, /us/ is one
broken machine/

I have gotten better at
writing haikus. I think I still
have some more problems

any word that has
‘bouncy’ in it
should be boba

one quarter of our
student bodies have no president

I’m running out of
material to fill up
a haiku with, rip the
roof off your house

all my life has gone
so well. i have no intention
of ever having a heart attack.

you all are in a
place called ‘home’. i would rather
not have you all here.

it’s five sixty eight
and i should go to sleep

i have more important
things to do than kill people

i had a really bad
inability to count my own
syllables

Can someone key
me in on a trick to
couple hundred haikus per
second?

i think haikus are
self-referential and
uniqueness

there are so many
flaws in this haiku

we have now reached
the end of our haiku