A mind-dump of excellent quality

Oooooooohhhh boy. A new semester has begun! I know this post is kinda late, but I thought I should wait until my schedule was FINALLY set in stone before I regale y’all with all the details. I officially got off the waitlist for my gym class, so everything’s set!

Scheduling classes this semester was a bit of a struggle. First of all, I got a little off-track during Independent Activities Period (IAP) and nearly NR-ed (no-recorded) the two classes I was taking in January. The “P-NR mindset”⁠01 The attitude that your grades don't really matter and you should do the bare minimum needed to pass your classes, usually resulting from MIT's pass/no-record policy for first-semester freshmen can be really great during your first few months at MIT; I really enjoyed building an identity and confidence that didn’t depend on my grades. At the same time though, it’s kind of crazy how a student who was pretty much at the top of their class during high school can slip so far into academic apathy that they forget about their 6.145⁠02 Brief Introduction to Python. It's a short class that runs over IAP and gives you the pre-reqs for a lot of course 6 classes final and end up taking it online in the middle of the woods on two hours of sleep (yes. I did that. It wasn’t good). I didn’t even dare pick out my STEM-based spring semester classes until I knew whether or not I’d passed 6.145 and 18.02A⁠03 A multivariable calculus class that runs into IAP .

On the other end of the academic spectrum, 21W⁠04 MIT's Writing course/major classes are HARD to get into. In the poetry workshop I eventually lost my spot in, a girl sitting at my table on the first day said “everyone knows that you need to pre-register if you even want a shot at getting into these classes”. Well, this was news to me! I was left scrambling at the last minute to try and get into a writing class, and eventually found myself emailing the professor of 21W.755, Reading and Writing Short Stories. On the first day of class he made it clear that about half of us would be cut from roster. I was NOT going to go through that again and I knew I would DIE if I was left without a 21W for a single semester and the lecture was so freakin’ exciting and ahhhhhhh I just wanted to writeeeeeeeeee!

And then I had a realization: I want to be a 21W minor, if not a major.

SO I spent the rest of that day darting from office door to office door trying to get someone to make me a 21W minor. Apparently you can’t do that sort of thing in one day, but I managed to get someone from the writing department to vouch for me so I GOT A SPOT IN THE CLASS and I’M 50% HASS⁠05 Humanities, Arts, and Social Sciences BOI NOW.

Once those were all set, I knew I wanted to try and sneak into a gym class. And I did! Because I hate myself (or maybe love myself?) I put myself on the waitlist for High Intensity Interval Training (HIIT). You basically do really hard things really fast for a small amount of time with an even smaller breaks in between. I secretly love really intense workouts -something about meditating on the utility of pain or whatever- so I was pretty jazzed when I got added to the official class list. Wish me luck?

So without further ado, my schedule! 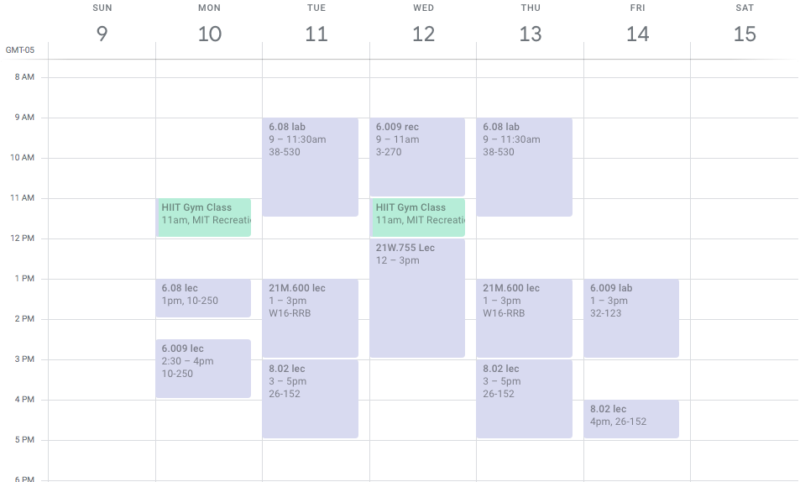 This set-up is really dope for me. Mondays and Fridays are pretty low-volume, so I can ease myself into and out of the weekend. Sure, my Tuesdays through Thursdays are pretty packed, but I’m okay with that.

Just a quick note: Things that aren’t on my schedule are 1) MTG, and 2) a UROP. After my little IAP almost-slip-up, I want to make sure I’m giving myself the time to succeed now that we have grades. I’m all about that work-life balance, so although I love the idea of doing those two things, I think I’m gonna wait just a little longer before I add anymore to my plate.

So yeah! Here I am, second semester. Come get me. I dare you. Fight me. COME AT ME BRO.