It’s been one hundred twenty-five days since my dad pulled up outside my dorm in a rented Penske truck. We piled all of my boxes and bags into the way-too-big trailer, leaving nothing behind but my empty room, some kitchen equipment, and a new pack of paper towel rolls from Costco – all of which I’ll probably never see again.⁠01 because I'm taking a Leave of Absence for Academic Year 2020-2021, and afterwards it's unlikely I'll be given a spot in the dorms I’ve mostly made peace with that, except that I still think about the paper towels quite a bit. I had a whole Penske truck to fill. I’m not sure why I left them behind. That’s the part I keep thinking about.

That day was – among an assortment of other feelings – exhausting. My dad had the smart idea of renting a Penske so that I could bring everything home, rather than leave anything in MacGregor House⁠02 my dorm (which at the time had very vague policies about what we could leave and where it would be kept and for how long) or a storage facility in Boston (which can be expensive and annoying). I was happy to pack all of my stuff up because (1) I could avoid dealing with the obscure and uncertain storage policies and (2) it meant less mental effort in packing – just put everything in a box. No need to partition items into “do I need this at home?” or “can I part with this for an indeterminate amount of time?” boxes.

I had a lot of stuff to pack. Go figure. You accumulate a lot of stuff if you live in a city for 18 months. Anyway, moving out ended up taking a lot of energy. When the seemingly endless elevator rides ended, the back of the truck was locked, and my key was returned to the front desk, I climbed into the passenger seat of the Penske and passed out. I slept all the way until we reached the ferry to cross from Connecticut onto Long Island.

My dad in the Penske outside of MacGregor House.
Thanks, Dad!
View from inside the Penske truck once we boarded the ferry. My friends always get surprised that cars and trucks can take a trip on a boat.

I miss that kind of exhaustion.

I’ve had this insomnia from being home. I’ve never been one to struggle with sleep. I could sleep nearly anywhere, anytime,⁠03 including lecture :( and since I’ve been home it’s just been such an effort. Maybe it seems harder than it is because I’m not used to needing to try to sleep. Regardless, I think a big part of it is boredom. At MIT I would roam campus and Cambridge, on foot or on bike, go to class and cafés, talk to friends and friends-of-friends. Life felt like a movie, honestly, with a fast-paced plot. At home things just sort of blend into each other as time inches past. I’m rarely tired, only bored.

Being at home isn’t all bad though. One huge, huge silver lining is that I’ve had the chance to formally live with my younger sister, Jennifer, again. She’s two years younger than me and is a member of Northeastern University’s Class of 2024. Since I left for college, Jen and I only lived together during holiday breaks and one week during the summer when my family visited Boston. I missed her.

She’s been pretty bored too. Being home for the spring semester of senior year seems like it just made senioritis a few orders of magnitude more intense. Plus, all the normal excitement of a senior year prom or graduation has been diminished with COVID-19 making gathering unsafe. Even without all of that, the summer after senior year tends to be a bit of a slow one, as people wait eagerly to go onto the next stage of their life. All of this is just to say, we’re both pretty bored people at the moment.

This past week we played six scrabble games, just to really cement the boredom vibes. It was somewhat enjoyable, honestly, but we think that’s because our standards are so low at this point for what constitutes entertainment. We actually played seven games; the first one we played just to play, but then I decided Scrabble could make for potentially interesting data, so I forced us to play six more rounds in which I recorded some data about each turn. The data-recording made it marginally more enjoyable for me and significantly less enjoyable for Jen.

Anyway, here’s what happened (in the form of many plots⁠04 I used Google sheets to record data and Python (numpy, pandas, and matplotlib) to make the plots. showing me being a Scrabble God) (sorry Jen): 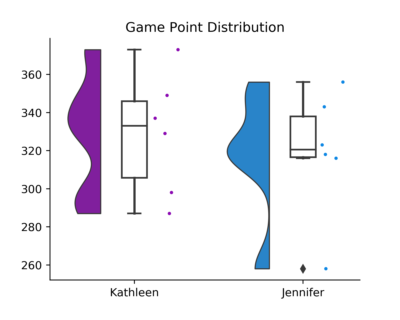 Here is a raincloud plot showing the distribution of the our final scores across the six games. I like raincloud plots a lot because they give you three ways to see the data: half of a violin plot (the leftmost solid-colored part), a box plot, and the raw data itself! Plus, it literally looks like a raincloud (if you rotate it clockwise 90 degrees).

In this particular raincloud plot, we can see that I had a higher median score than Jen. After making this plot, I was surprised to see that if you exclude the one outlier in Jen’s performance (represented by the diamond in the box plot) her distribution is concentrated within the range mine is in. In fact, if you do calculating using all of the data, I have a higher average score of 328.8 points to her 319.0 points, but if you exclude that outlier in Jen’s performance, she has a higher average score of 331.2 points per game.

So I guess we’re both scrabble gods? Or, considering that professional scrabble players average upwards of 400 points in their 25-minute games (we played for longer than that per game) maybe neither of us are scrabble gods. 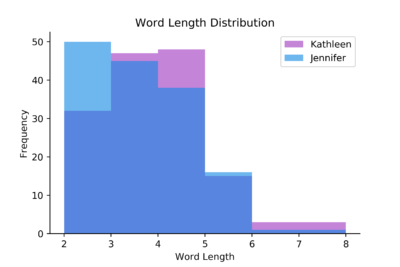 Figure 2. Histogram of the length of words formed

Here is a histogram showing the distribution of the length of words we formed, again across all six games. It’s important to note that this isn’t the number of letters used per turn; I could add one letter (most often, “s”) to a long word (“animal”) and for that turn I would receive points for “animals”. I had a slightly higher frequencies for longer words, while Jen had a higher frequencies for shorter words.

Distribution of the number of letters used per turn 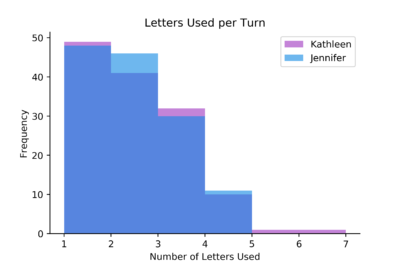 Figure 3. Histogram of the number of letters used per turn

Here is a histogram showing the distribution of the number of letters we used per turn, again across all six games. Again, I had a slightly higher frequencies for using more letters; I used 5 or 6 of my seven available letters on some turns while Jen maxed out at 4. We both had a median of 2 letters used per turn.

Distribution of the number of words formed per turn 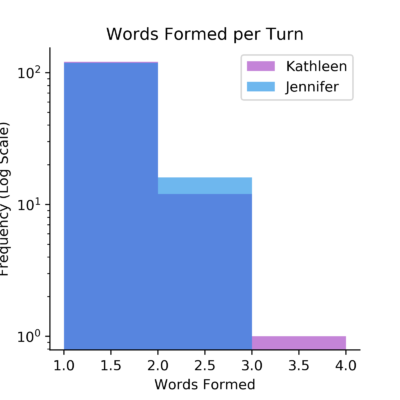 In this histogram, I plotted the frequency (on a log scale, for better visibility) the number of words modified or formed per turn. I’m not sure what the maximum number of words one could make in a single turn is – I guess it’s at least 8, if you could use all seven letters to form a word where each letter is adjacent to another string that is successfully modifies. In our games, Jen and I stayed in the little leagues. I was the only one to make 3 words in a single turn, but she made 2 words per turn more often than I did. We both had a median of 1 word per turn, but Jen had an ever so slightly higher average, at 1.12 words per turn to my 1.10. 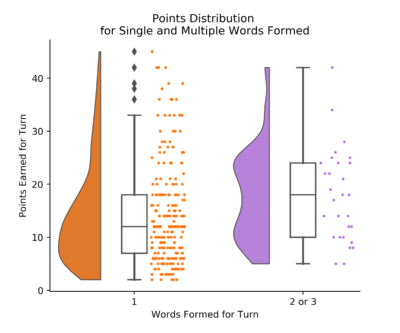 I wanted to see if there were any trends in when I started winning – did I get and maintain the upper hand, or did Jen and I flip flop on the leaderboard until nearly the last turn? I plotted all six games with the cumulative points we each had at each turn, and added a dashed line at each turn when the leaderboard switched. The red dashed line indicates turns where my score fell lower than Jen’s, while the purple dashed line indicates I’ve climbed back to the top. 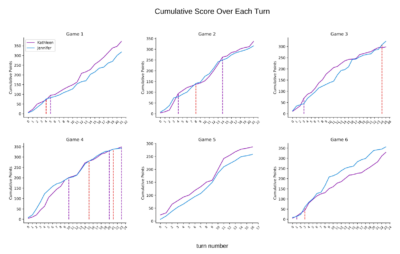 Looking at games 1, 2, 4, and 5 (the first two columns of the figure below) we can see that there was no trend – in some games I got and maintained a lead early on, and in others I only got the lead in the middle or very last part of the game. The same can be said of when I lost (games 3 and 6) where I lost the lead once early on and once later on.

I don’t feel like I have enough data to make any grand claims on what strategies worked best, and at this point, Jen and I are too sick of Scrabble to play more. I think in general trying to make “smart” moves like modifying more than one word, or placing high-point letters on doubling squares, has gotten Jen and I pretty far. You can try it out. Especially if you’re bored like we are.

Depending on who you are, you might have noticed I’ve been absent from the blogs for a while. I’ll write more seriously about that later. For now, though, if you’re wondering why I’m back, you can pick one of these as an explanation: