Sid Puram UROPs in the renowned chemical engineering lab of Dr. Robert Langer, developing polymer microspheres that can potentially be used to develop a cancer vaccine.

For the past four years, Sid Puram has had a UROP in the renowned chemical engineering lab of Dr. Robert Langer, developing polymer microspheres that can potentially be used to develop a cancer vaccine. 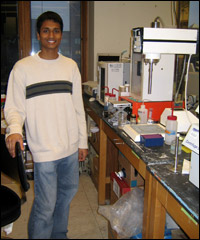 Genetic vaccines work by inducing an immune response to a protein that is produced by inserting beneficial DNA into the nucleus of a cell. The tough part is getting the DNA into the nucleus, which Sid achieved by encapsulating the DNA in a microsphere. These microspheres are about 1-10 µm, about a hundred times smaller than the period at the end of this sentence, and are made out of two types of biodegradable polymers.

Inside of the spheres are pockets of DNA. If you imagined the sphere as a beach ball, the pockets of DNA would be about the size of a ping pong ball and the air in the beach ball would be replaced with polymer. Once the microspheres are incorporated into the cell, the sphere degrades, releases the DNA, and then the DNA finally gets into the nucleus where it can be expressed.

Sid says that one of the most exciting parts of his research was when he spent around three months trying to replicate the experimental results of his mentor, Steve Little, to no avail. That is, until one day when he changed a small bit of the procedure and the experiment finally worked. During those three months, he had a lot of self doubt and began reconsidering a career as a biologist, but thankfully his patience and determination paid off.

Sid says that the UROP is great chance to gain lab experience and he encourages students interested in UROPs to be persistent and to apply to positions even if you think of yourself as underqualified. He reflects that he applied to the Langer Lab knowing that he was not as experienced as other applicants, but he received the position because of his enthusiasm and commitment. While he was lucky to receive a UROP after his first interview, he acknowledges that usually it is not that easy and you must really commit yourself to the process.

At MIT, Sid is completing a double major in Biology and Brain and Cognitive Science with minors in Political Science and Chemistry. Sid plans on entering an MD/PhD program next year so that he can have a career that combines his passions of research and clinical work.