playing the new animal crossing, whose tropical island setting and cute characters and mindless activities and already-brimming corpus of memes has kept me sane in this quiet but stressful, oftentimes stifling⁠01 i ran speedtest.net in my room last night and got 0.27 Mbps download speed and nearly broke down long island household. the game’s release is almost prophetically convenient with respect to the current situation we all find ourselves in. if you currently own a nintendo switch, are willing to spend $60, and think you are the type of person that would enjoy cute games that largely involve mindless daily chores and where much of the charm comes from social micro-interactions, i highly recommend playing new horizons.

reading fiction. i currently have pink post-it notes stuck inside three books on my living room table — pachinko, hitchhiker’s, and infinite jest — and advance them at a snail’s pace. i made a point last fall in only bringing books i intended on finishing with me to campus (these three among them), but of course i never ended up finishing a single one. now that i have an intangible amount of free time, i’m finally making some slow headway, if only because i have a limited number of things to occupy my time. 02 they're all good books: i don't know why i'm so bad at finishing them, or why my attention span seems to have eroded over the years. maybe it's the same reason why it's been 168 days since i've last blogged. 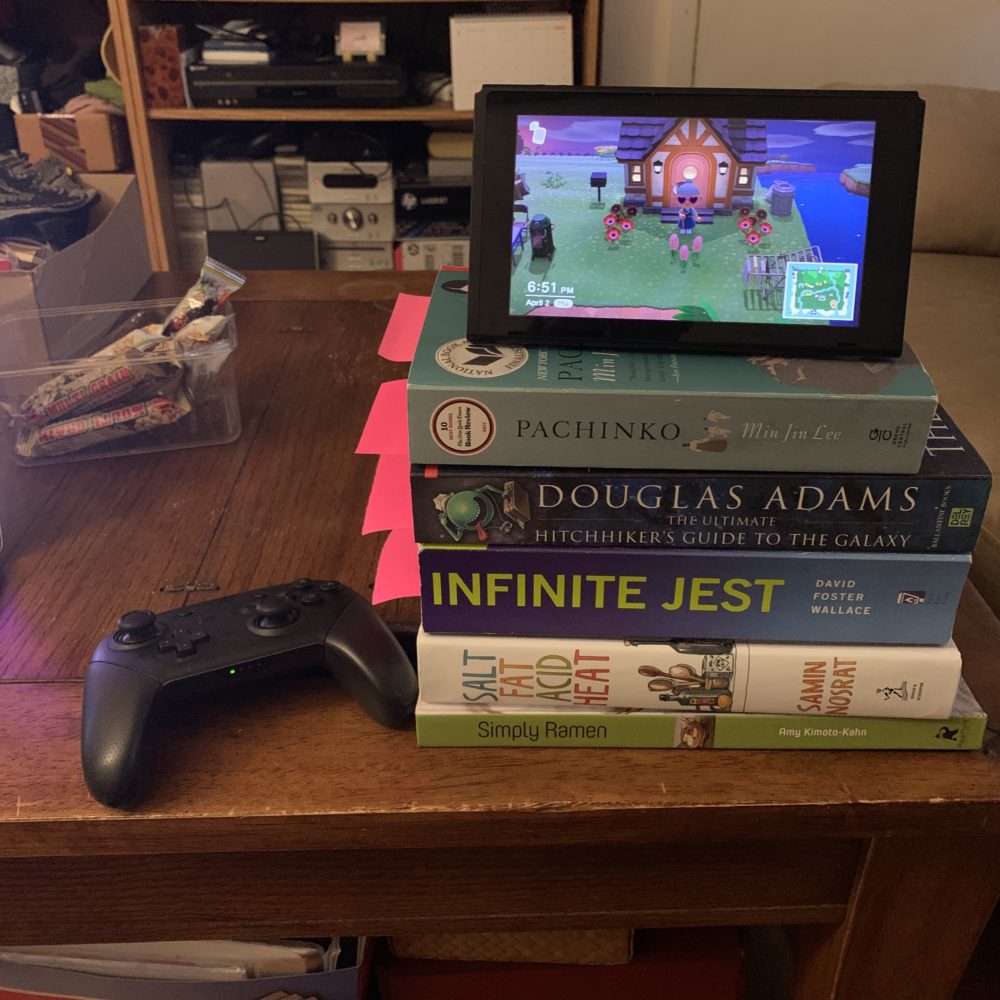 doodling on my bass that i bought used at the local sam-ash three months ago over winter break.⁠03 which now seems so long ago, when even february seems ancient i’m trying to get better at several stereotypical instruments at once, what with my drumming practice pad and acoustic guitar, though i’ve kind of fallen in love with the bass and have essentially set the others aside for now. the day before march 10th, i was trying to learn 1612 by vulfpeck, which is as simple as it gets for basslines and for joe dart. now i’m trying to learn beastly, and wait for the moment, also by vulfpeck, and some songs by the marías. i work on my two-octave scales, moving around the circle of fifths. i practice after 4pm because that’s when my mom, who now appeases angry verizon fios customers on the phone from home, is done with work. 04 the ethernet cable she uses is run through a small hole in the floor because our router is in the basement. i wonder if i should do the same.

attempting to focus on classes, and failing. the force that prevents me from approaching classwork in any meaningful way is indescribable, but feels different from procrastination. perhaps it’s depression. my emotions ebb and flow. sometimes i feel fine, and am reminded and take comfort in the fact that we as humans are remarkably good at adapting to extraordinary circumstances. sometimes i’ll feel this tangled emotional knot in my chest that wells up, then floats up and consumes my headspace and i close my eyes and want to bawl or scream. but i haven’t done either yet, though i would sorely like to. 05 and when it's not at mit, i feel weird about me gutturally screaming.

on monday, i zoomed into data vis⁠06 6.894 lecture for five minutes before i decided to shut my laptop, grab the car keys and a book, and drive 18 minutes to west neck beach (had to look up the name because i don’t really live here anymore) on the north coast. i stared at the long island sound for an hour from the driver’s seat. i turned a few pages of infinite jest. i watched a couple kids and their parents climb the large rocky outcrops on the water’s edge under the blanket gray sky. i cracked the window an inch or two, enough to hear waves and lack of wind. it was nice to be outside after only having existed in three rooms for the past two weeks.

i’m taking interactive music systems⁠07 21M.385 with nisha⁠08 we're working together on the final project, so stay tuned , which has been one of my favorite classes at mit. i’ve been able to make systems like this one. we’re literally implementing guitar hero in this week’s pset, which is just so damn cool. (eran egozy, the professor, co-founded harmonix, the company that made guitar hero and rock band, among other music games.) i’d decided late last fall 09 after accepting an offer at tulip, a start-up in somerville that i eventually want to pivot from doing software and pursue music instead, perhaps in a couple years. i saw myself becoming a musician, and i still do, but after taking this class i’ve been inspired by the intersection of software and music, and realized that my life doesn’t have to be completely one or the other. i had plans to talk with eran for life advice, but that was before things happened. perhaps in a future zoom call.

making kimchi fried rice, something i’ve been getting better at throughout the semester. melt a sizable lump of butter in the pan, add half an onion diced and a spoonful of garlic, and wait until the onions start to change color. then add a cup of chopped kimchi and a generous amount of kimchi juice. add some diced spam after a few minutes and wait for the kimchi juice to evaporate almost completely before adding the fridge rice. mix everything well, then add sesame oil and soy sauce to taste. optionally add some scallions, a crispy fried egg, nori furikake, or sriracha sauce. 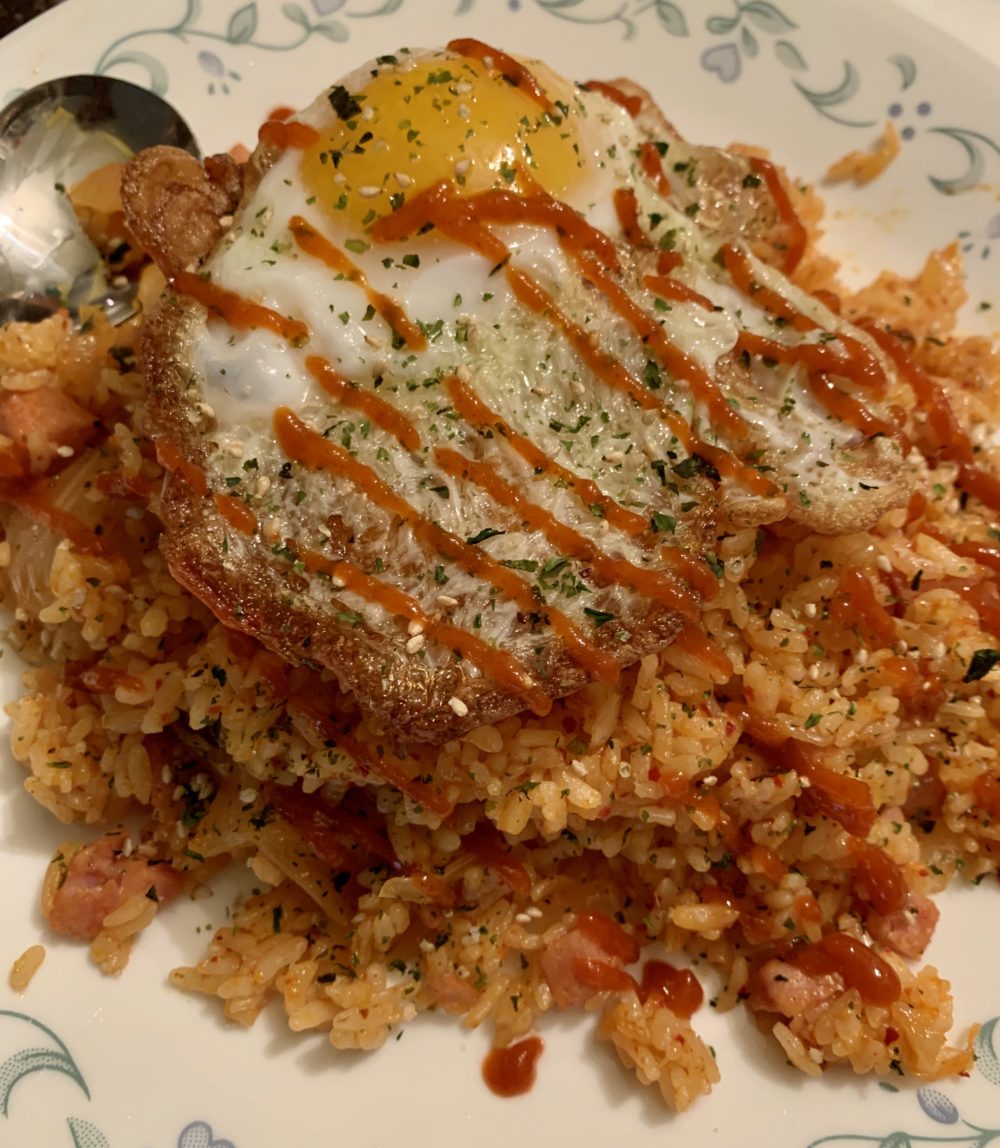 keeping in touch with friends and those who i love, despite the distance. toons still meets over zoom on thursday nights, and we check in with each other and play jackbox games. discord servers of communities i’m in make me feel at home away from home.⁠10 quite sincerely, boston and cambridge have and will become more my home than anywhere else. even though my internship through misti japan is cancelled, i still greet familiar faces at virtual japanese lunch table on wednesdays. i facetime casey, ben, sam, friends outside of mit i didn’t expect to make six months ago but feel close to now.

waiting seemingly in vain for this strange time to pass, trying not to think about how the last four years have come to an end just like that, with a whimper, so unbelievably tragic that it’s almost comical. but of course it’s not.