“I really gained a new perspective on the airline industry, on commercial strategy, on competition, on inter-cultural communication." 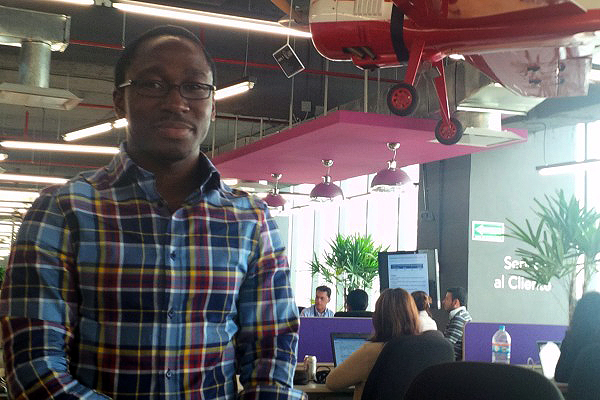 Read other MISTI Notes from the Field

"To me, this was all personal challenge. I thought I was a good manager, and
wanted to give it a try in a highly competitive industry with ultra-low margins. It
would be easier to come up with a list of things I didn’t learn!"

From the minute he walked through the doors of Volaris’ Samara offices, Tayo, MIT Sloan MBA ’14, was reminded that he was at one of Latin America’s youngest, fastest growing, and most successful airlines. “There were planes hanging from the ceiling. Meeting tables were airplane tires stacked on top of each other and covered in glass. Meeting seats were actual airplane seats taken from cabins of old planes. Medicine balls everywhere.” The message was clear – Volaris believes in hard work, collaboration, and fun.

All were elements of Tayo’s main project, "Dynamic Currency Conversion," a system that allows international customers to pay with their native debit or credit cards. The technology transfers the 3% + currently charged to cardholders by Visa and MasterCard for currency conversion to Volaris. In return the consumer gets transparency and convenience. “For a low cost airline, every extra cent of profit counts. Managers told me DCC would add at most 1.5% to the bottom line. There was a lot of skepticism.”

The project required that Tayo research the top DCC providers in the world. He took calls from vendors in Brazil, Ireland, the US, and Mexico. “The best part was my model projecting Volaris’ earnings for the next 8 years. For airlines, that means forecasting plane purchases, demand for new routes, load factor per route, max willingness to pay for tickets and luggage…a lot of forecasting based on data and calculated assumption.” There was also analysis on card purchases made on Volaris channels. “Turns out there is enormous earning potential from DCC at Volaris. We’re talking maybe 3% to the bottom line.”

Read other MISTI Notes from the Field