Yesterday after work I headed downtown for the evening. First stop was one of my favorite restuarants in Chinatown: Taiwan Cafe. Taiwan Cafe is the best place in town for soup dumplings (very, very yummy).

Yesterday after work I headed downtown for the evening. First stop was one of my favorite restuarants in Chinatown: Taiwan Cafe. Taiwan Cafe is the best place in town for soup dumplings (very, very yummy). 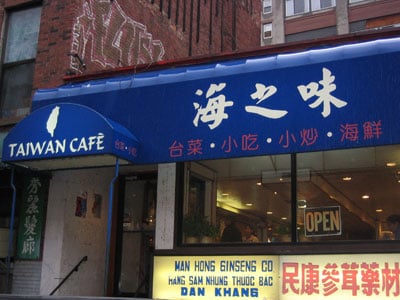 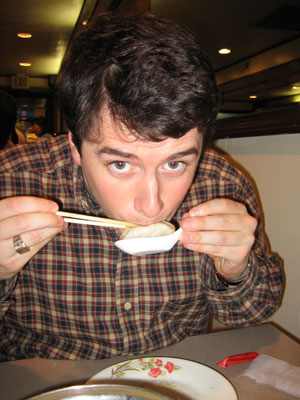 Soup dumplings are delicious and fun to eat.

For more blog entries that begin with great food recommendations, browse on over to Mitra’s blog (this week: Thai food at Chili Duck).

After dinner, it was over to the Boston Common Theater, Boston’s largest (and most expensive) movie theater. When I walked in, I saw a big crowd of geeks, and suddenly remembered that this was the night of the super-secret pre-screening of Joss Whedon‘s next film, Serenity (trailer here). Of course, I was one of the many folks who didn’t get tickets.

Instead, I watched Fever Pitch (with Drew Barrymore and Jimmy Fallon, directed by the Farrelly brothers). There were many great shots of Boston, and I thought the film well captured New England’s passion for the Red Sox, but the love story seemed to fall a little flat. And for those of you who were upset by the changes from the book to movie version of Hitchhiker’s Guide, you should read the Nick Hornby novel on which this movie is very loosely based (I’d say Clueless is a more faithful adaptation of Emma). The largest similarity, I suppose, is between the long-suffering fans of Arsenal and of the Red Sox (and, by implication, Manchester United and the Yankees). Interestingly, both Arsenal and the Red Sox (both of whom I root for) majestically won it all in 2004.

In the last couple weeks, though, I have seen some trailers for movies I’m pretty excited about, including The Lion, the Witch, and the Wardrobe and Howl’s Moving Castle. and (big confession here) even though I didn’t much care for the book, The DaVinci Code (it’s got Tom Hanks and Audrey Tautou, not to mention Ian McKellen, Alfred Molina and Jean Reno?!). Which upcoming films are you excited about?