A week in Iceland.

I spent spring break in Iceland, mostly in the backseat of a white car on the asphalt roads of Route 1 but also behind a waterfall and atop a glacier and in a cabin on the black sand beaches of Vík.  Here’s a quick post about that experience, written as I continue to deny the fact that school has resumed.

After landing in the Keflavík airport at 4 AM on Tuesday, we spent the first day driving along the Golden Circle, a route that loops from Reykjavík into central Iceland and back. It hits a few prime tourist attractions, such as the Þingvellir national park, Gullfoss waterfall, the Geysir field, and the Kerið crater. 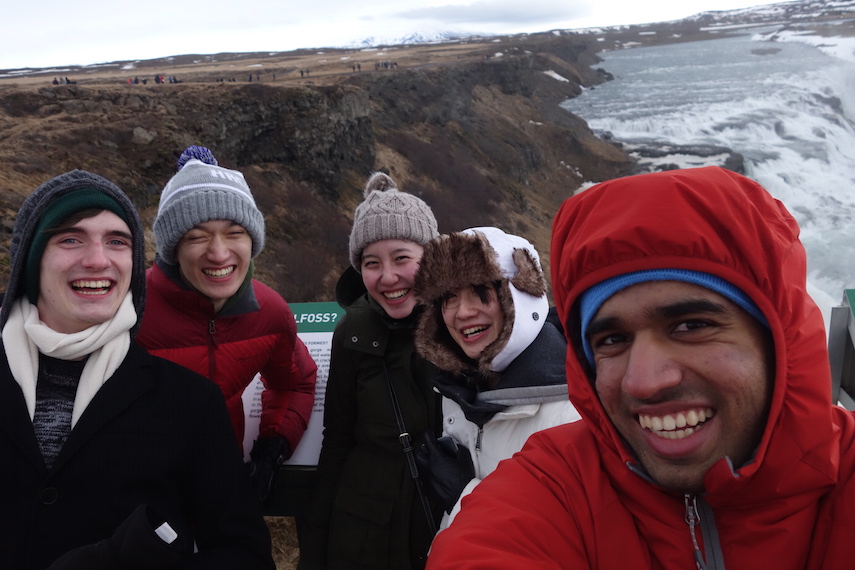 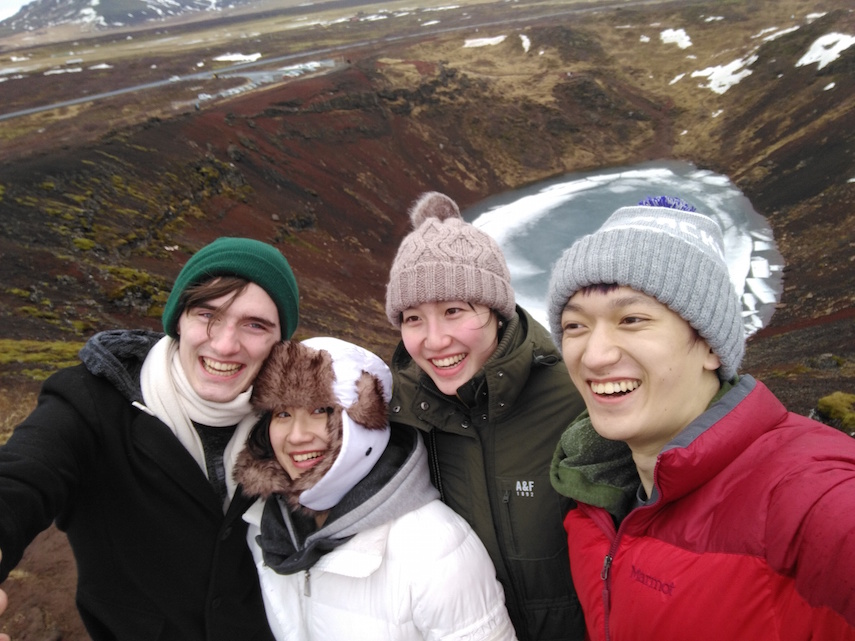 On the second day we drove to the village Vík, where our hotel for the second night was located. We explored the area south of Reykjavík, making stops along the way to see waterfalls and to catch our first glimpse of Vík’s beaches. 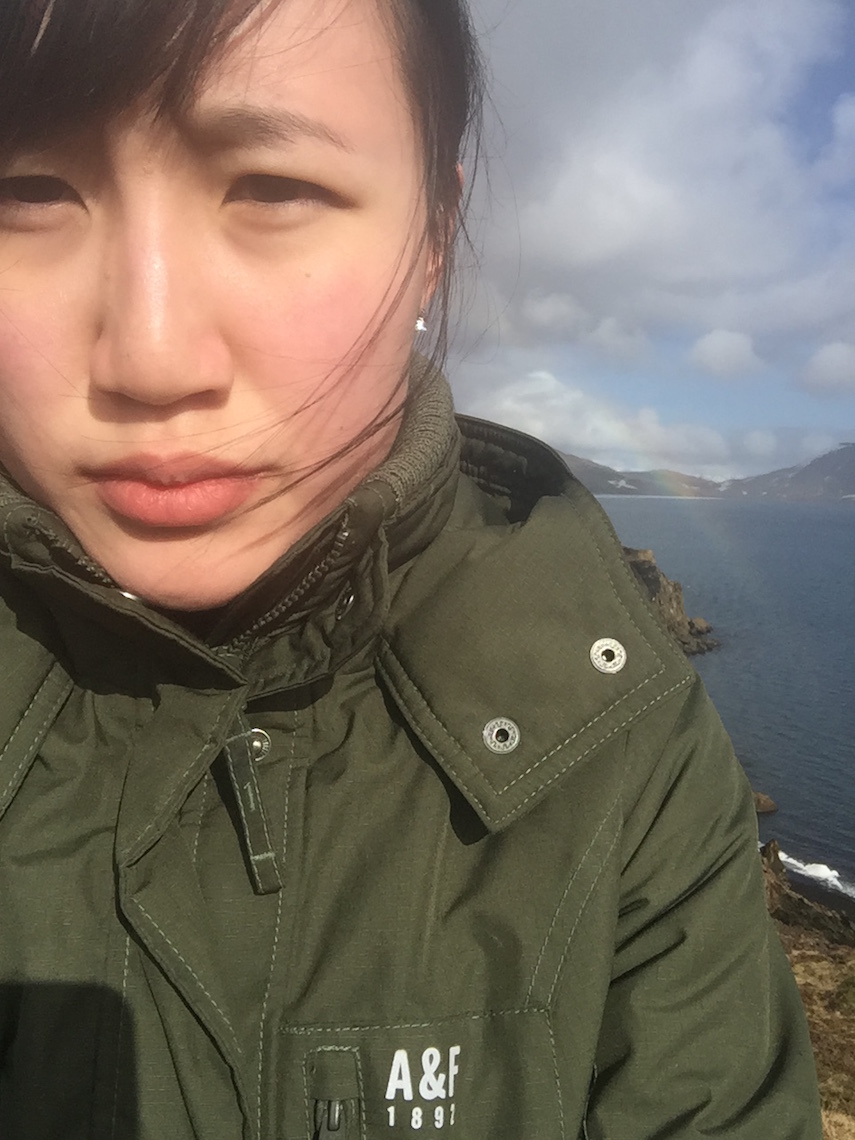 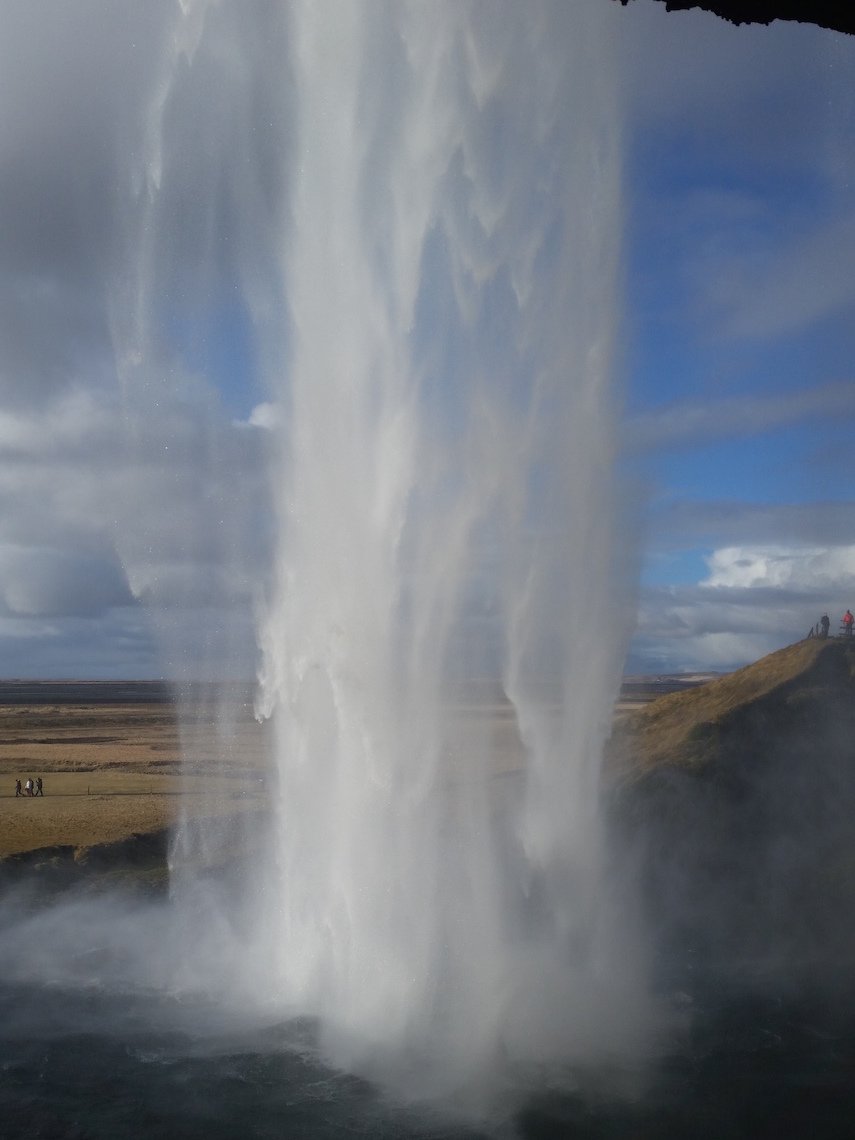 (1) Me enjoying myself at a stop en route to Vík, feeling very happy and enthusiastic about the rainbow in the background!! (2) The view from behind the Seljalandsfoss waterfall. 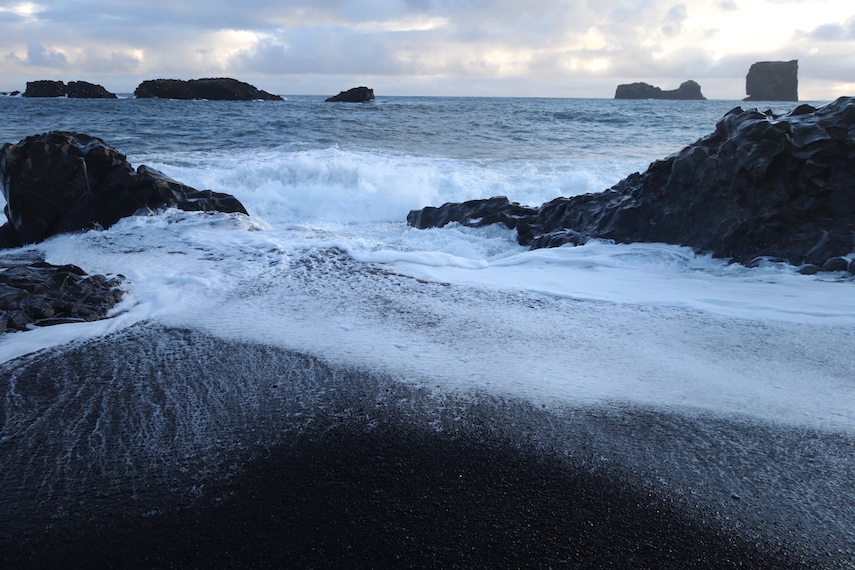 The black sand beach in Vík.

That night, at the hotel, we sat in a geothermal hot tub for several hours–there was a power outage, it was cold out, no one wanted to move. At around 1 AM, we finally got out of the hot tub, shivered all the way back to our room, and went to sleep, preparing for another long day of exploration.

The third day was packed with adventure–we spent the morning ascending the 221 meters of Hjörleifshöfði (a “tuff promontory”). We were caught in extreme winds and a painful hailstorm, but fortunately, all of us made it back to the car unscathed. We were driving toward the town Höfn, where our hostel for the night was located; about halfway between Vík and Höfn, we visited the Skaftafell preservation region. Skaftafell contains Svartifoss, a famous waterfall surrounded by basalt columns, as well as the Hundafoss waterfall and the Sjónarnípa viewpoint. 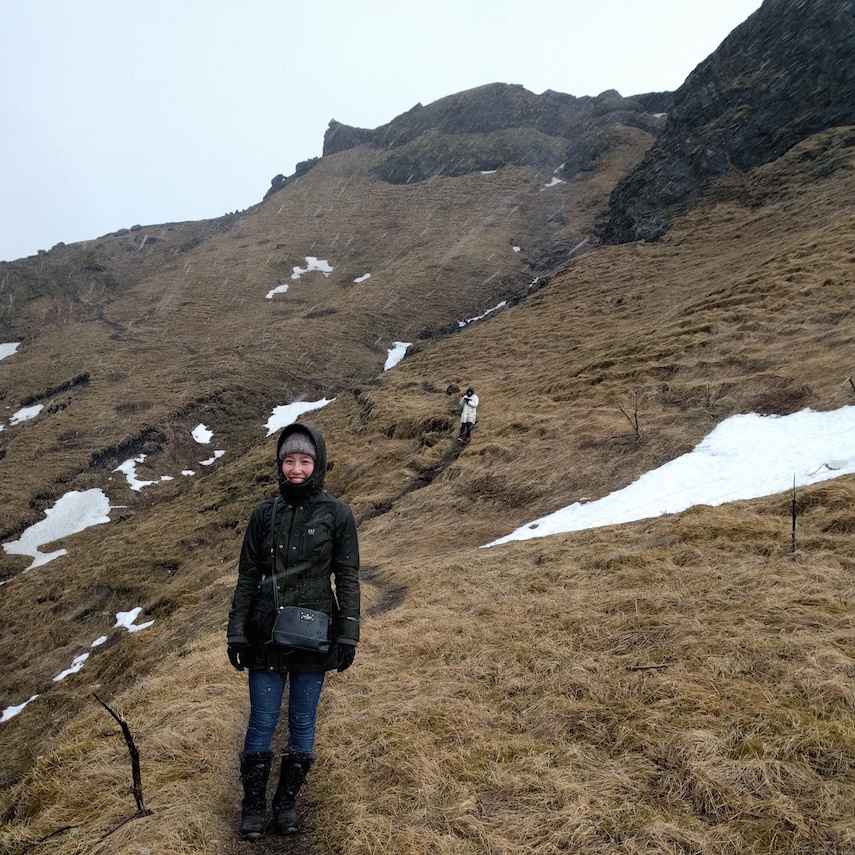 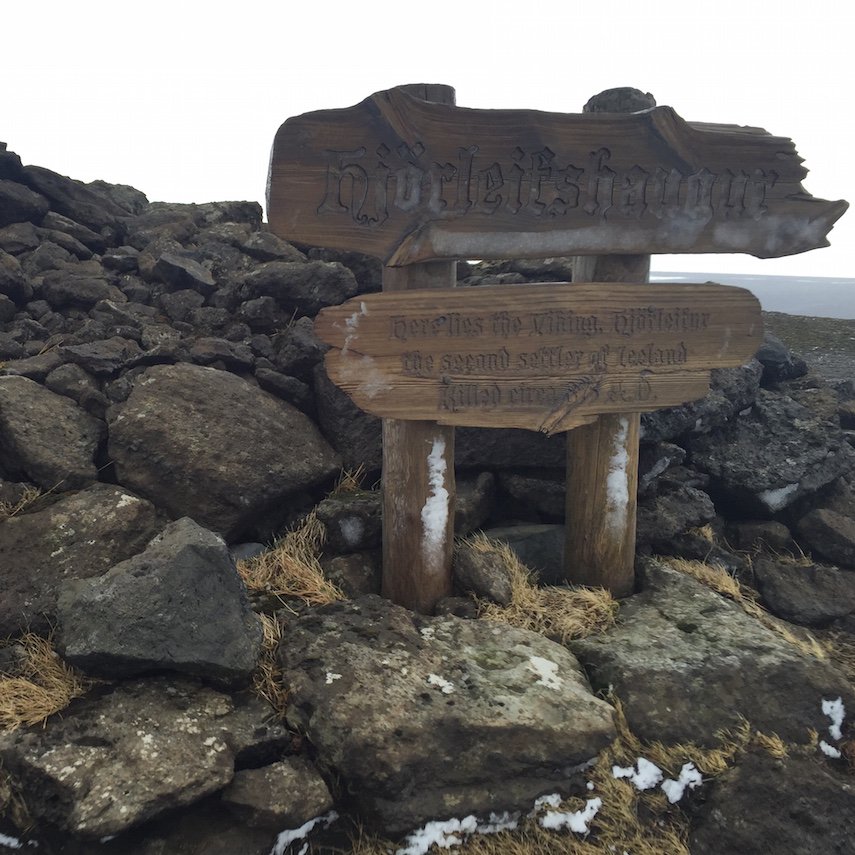 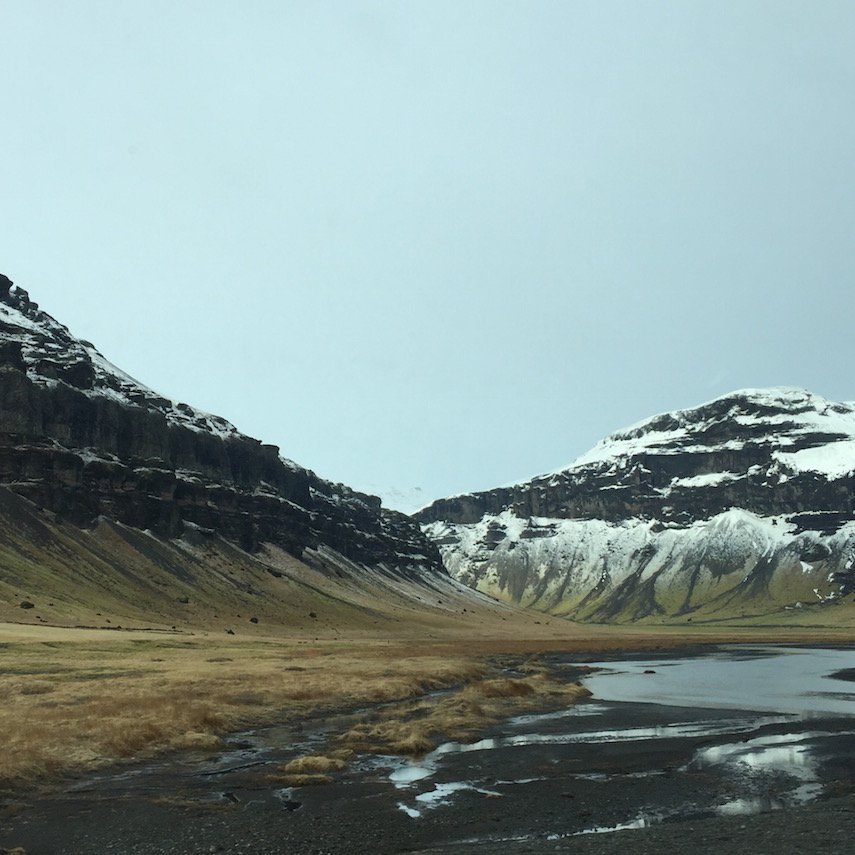 (1) Hiking Hjörleifshöfði in heavy hail. (2) The resting place of the second settler of Iceland, atop Hjörleifshöfð. (3) A casual photo taken of the scenery outside the window during our drive. 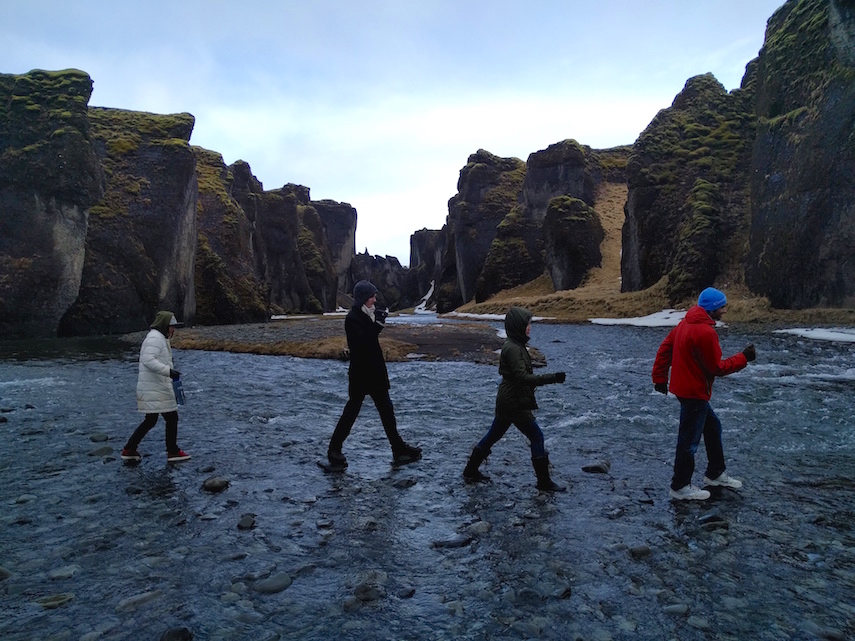 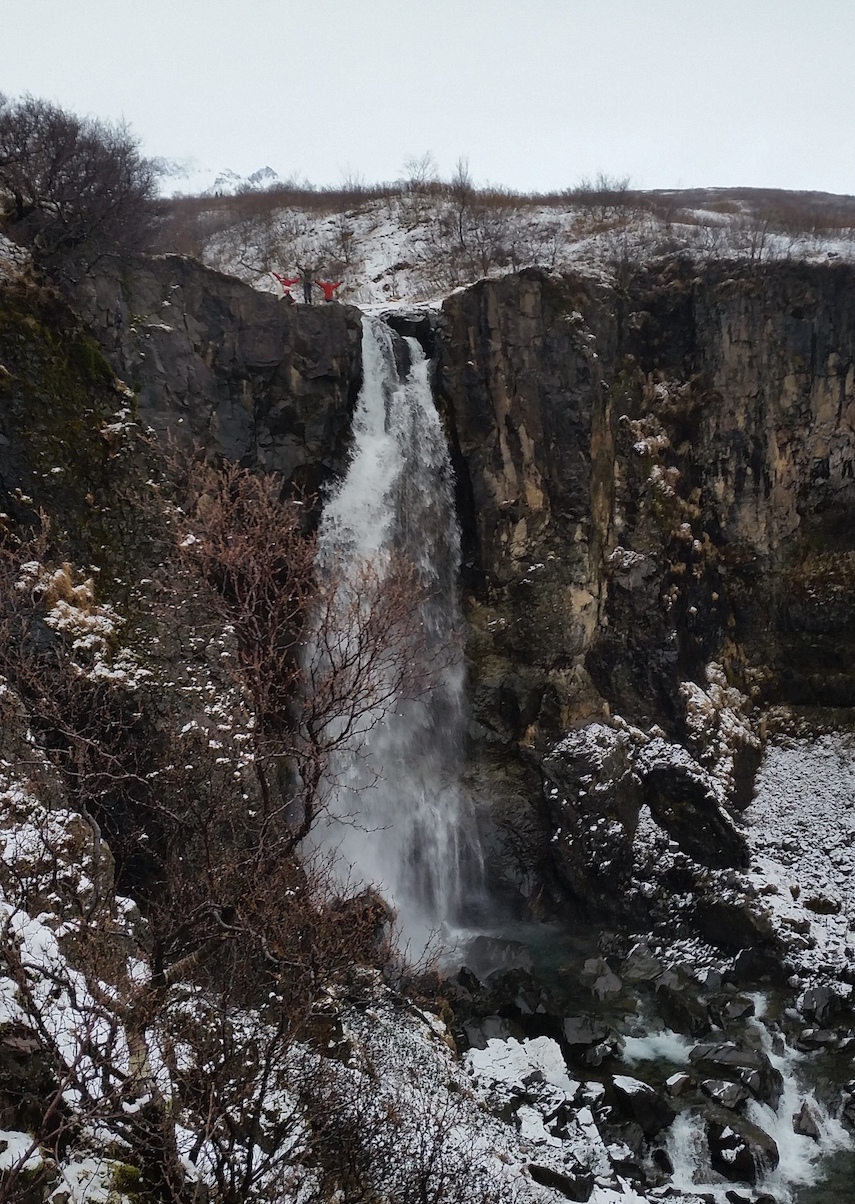 (1) “Abbey River”: Recreating Beatles album art in the Fjaðrárgljúfur canyon. (2) The Hundafoss waterfall–we’re the tiny figures to the left of the top of the waterfall. 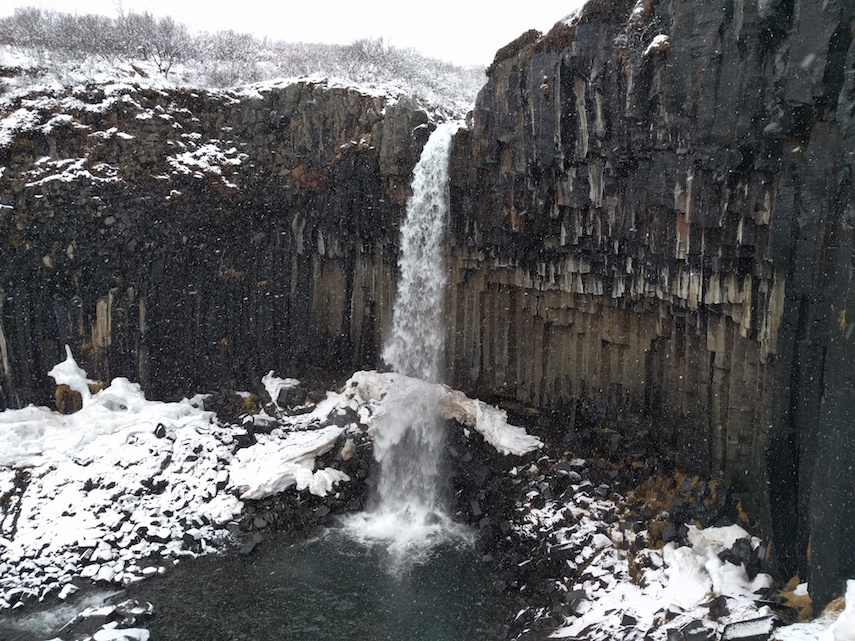 A panorama from the Sjónarnípa viewpoint.

After a busy third day, we enjoyed a relatively relaxed Day 4–we visited a glacier lagoon and returned to Vík to stay in a cabin on the beach (fun fact: the cabin was built by our talented Airbnb host). 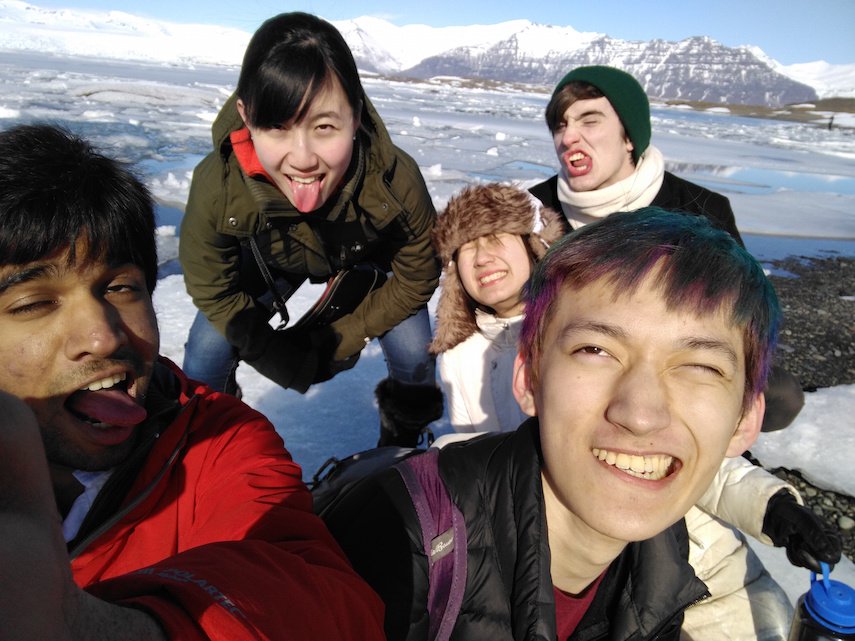 5 buffoons and a lagoon. 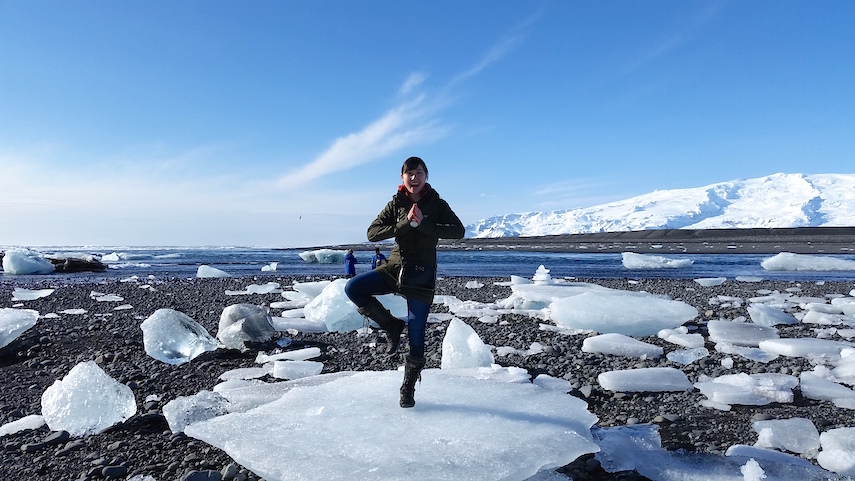 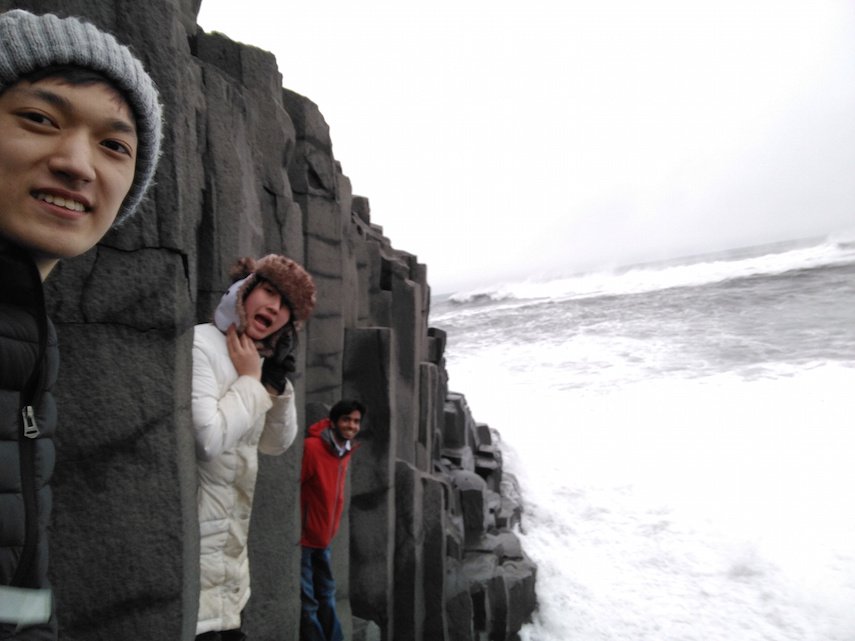 (1) Yoga on the beach!! (2) Standing on the basalt columns of Vík’s beach. Our cabin was a five-minute walk from this area.

On Day 5, we backtracked to Skaftafell, where we’d registered to take part in a glacier walk/tour. On the way, we visited the Skögafoss waterfall. 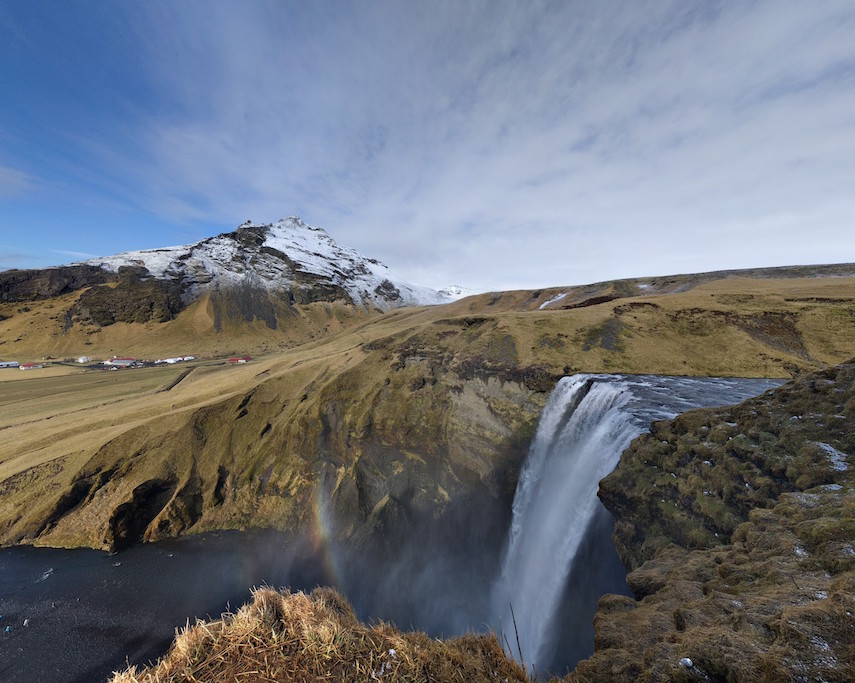 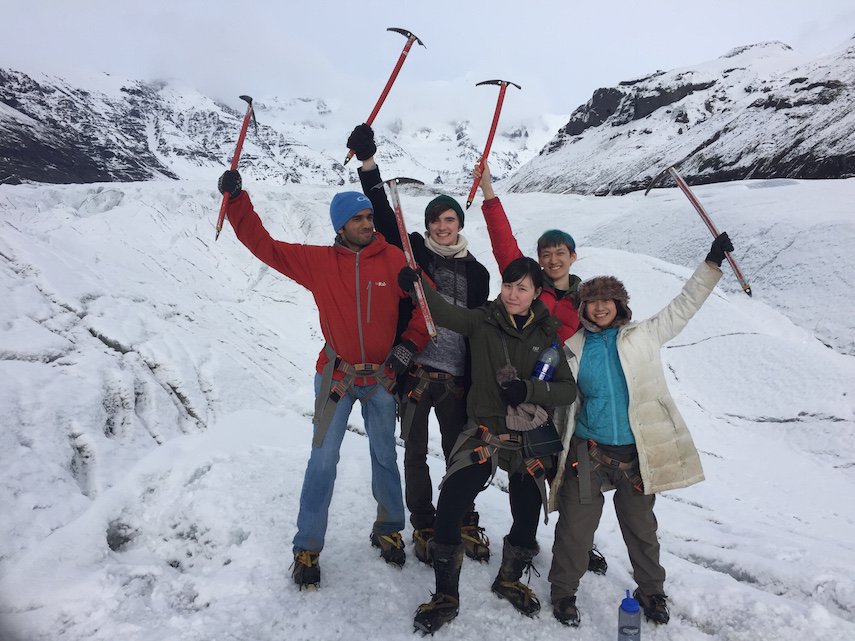 (1) Conquering the Svínafellsjökull glacier, where scenes from Interstellar and Game of Thrones were filmed. (2) Ascending a ~*~very tall, very real~*~ mountain!!!!!!

We returned to Reykjavík that evening to explore the nightlife. Though I unfortunately have no good photos of that night, I do remember having a good time dancing to 80s music at the Lebowski bar.

We intended to spend Day 6 exploring Reykjavík, but we realized too late that it was Easter Sunday, which meant that many attractions (notably, this museum) were closed. We were, however, still able to visit a church, eat lunch at a hip laundromat-café, visit an exhibit in the Saga Museum, and enjoy a gourmet (by which i mean absurdly expensive/bougie/wallet-emptying but incredibly delicious) Icelandic seafood dinner. 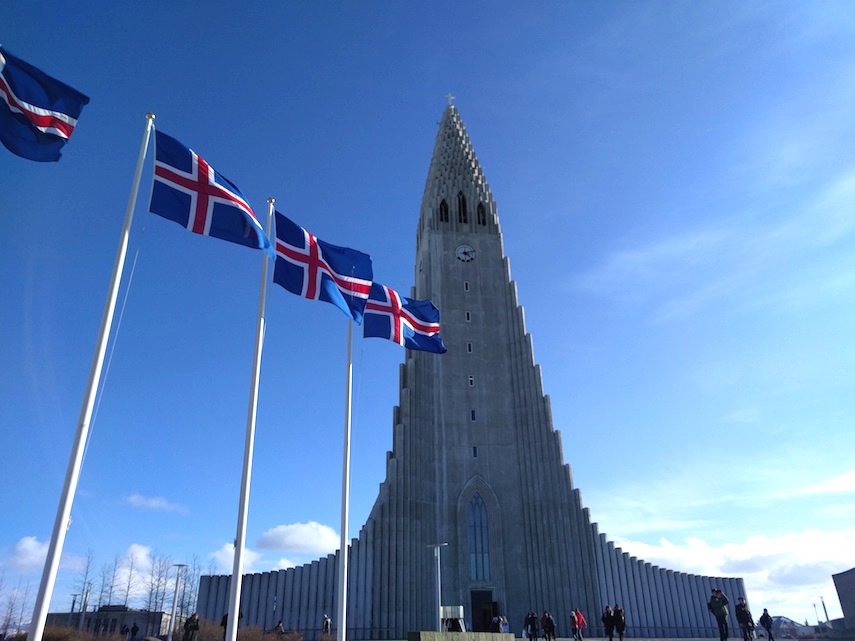 The main event of that day occurred after nightfall, when we drove to the lawn of the Icelandic president’s house to view the northern lights. We were worried that we wouldn’t catch the aurora on our trip, and this was our final opportunity to do so–fortunately, we got lucky with clear skies through which the lights were visible! The photos are a bit blurry because they’re long-exposure shots taken without a tripod, but in any case, the sky was beautiful that night. 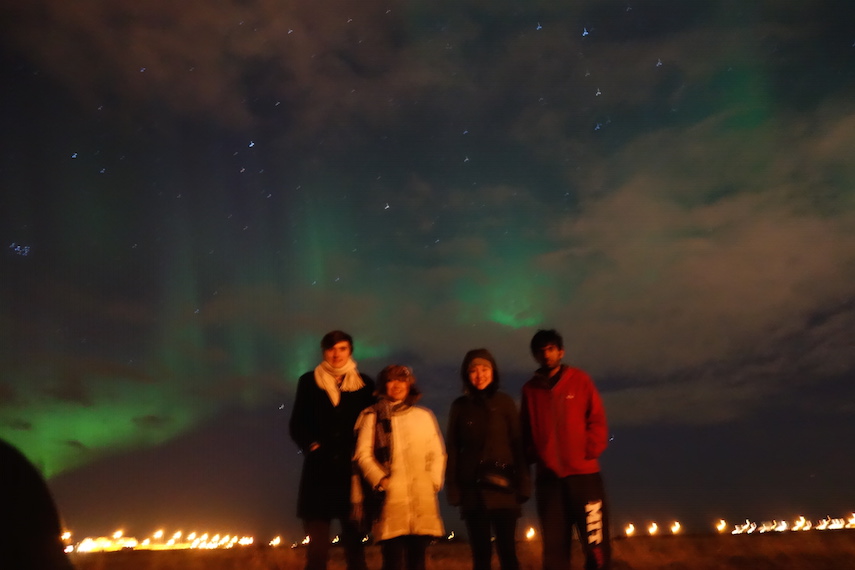 Day 7 was our last day in Iceland. Our final destination was the Blue Lagoon geothermal spa, which we visited on our way back to the airport. 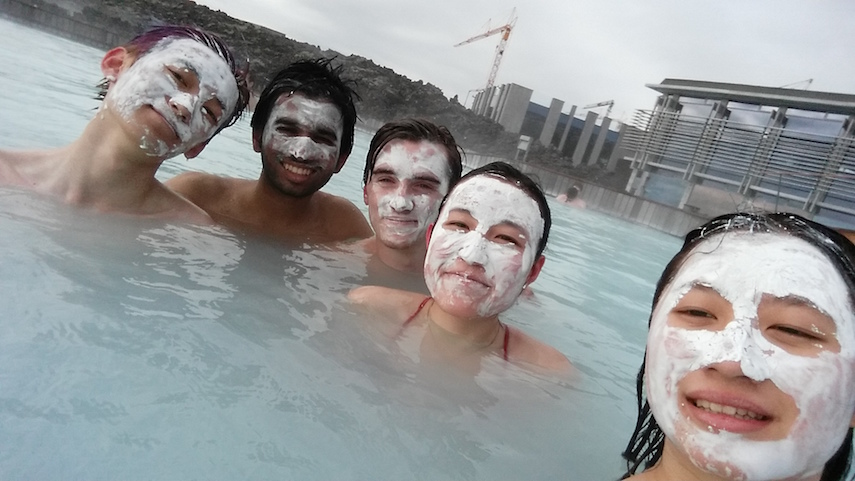 When I was trying to recruit friends to go on the trip with me, I sent an email that said “there is a ‘geothermal spa’ and waterfalls and a stark, breathtaking landscape. I’ve never been, but I’ve been to Norway, and based on that experience, Scandinavia is not just really photogenic; it is even more striking in person.”

I still stand by these statements (except, of course, “I’ve never been”). With the exception of the northern lights, the real thing is better than the photos.

Anyway, I’m now convinced that Iceland is the country with the highest concentration of beautiful sights, and I would highly recommend traveling there to anyone who can stand cold weather–plane tickets are cheap and the landscape is gorgeous. I was grateful for the opportunity to escape the MIT bubble and the professional world, to really relax for the first time in many months. My only regret about the trip is that it couldn’t be longer, and I would happily visit again someday!

A final, unrelated note: now that we’re in the season of college decisions and CPW–if you’ll be on campus for CPW and want to meet up, email me and I’ll see what I can do! I unfortunately won’t be at many scheduled events because I’ll be spending a lot of time with my parents, who are visiting that weekend, but I’m always interested in meeting y’all. :~)