We’re already a month into the semester, and Add Date⁠01 the last day students can add a class to their schedule without a fee/petition, coming up on march 9th quickly approaches. My schedule has been pretty set in stone since the first week of classes, but looking back at old blogs, I quickly realized that I’ve never posted my semester-ly schedules, or really talked about my major at all, and that maybe I should start as the only blogger in Course 1.⁠02 civil and environmental engineering So, here’s what I’ve been up to for the past month: 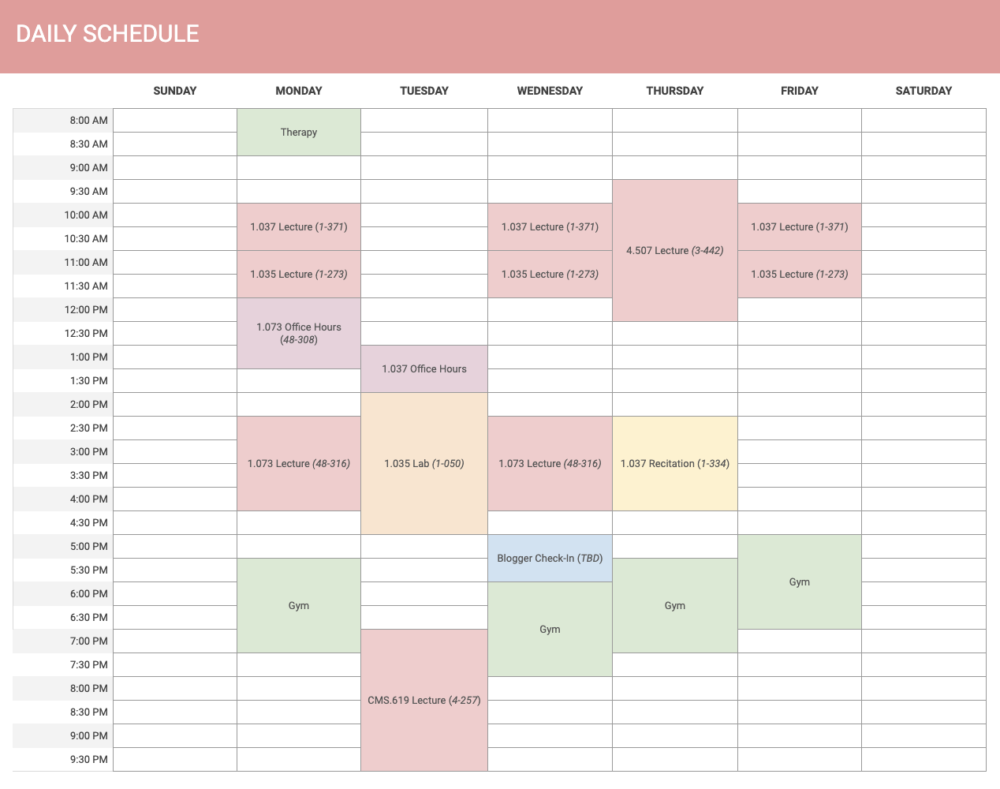 And, before you ask, yes, I refuse to use Google Calendar and instead choose to spend an hour every semester making a silly spreadsheet. It is my equivalent of decorating a bullet journal or buying fancy face wash. It’s called living a little.

This class is a lab class, and a direct successor to 1.050: Solid Mechanics, which I took in the fall. Last semester, I learned all about stresses and strains, Beam Theory, what a fourth order tensor⁠03 actually, i still don’t fully get this one is, how to draw a Mohr Circle, and the beauty of making assumptions in engineering in order to simplify all your required math. Solid Mechanics is a bit of a simplification for how engineering works, because much of its teaching relies on the assumption that your materials are mostly homogenous and continuous. Think, a solid slab of incredibly smooth concrete or a beam made of wood. And while this works often for general calculations, it’s not a perfect or accurate representation of much of our real world.

1.035 serves as a continuation of the material with more depth, and a lab component where we actually get to see the magic behind the theory. Mostly throwing the assumption of homogenous materials aside, we’ve focused on how different components with different properties work together in a single material. So far, we’ve covered mixing and transporting of materials, elasticity, and some thermodynamics. In lab, we’ve made grain size distribution curves, mixed concrete by hand,⁠04 a truly laborious task. think of making homemade shortcrust, but instead of flour you have 22 kilograms of sand and gravel and stretched out metal rods for tensile tests (not by hand). Plus, the same professor who taught 1.050 is continuing this one, and he makes lectures pretty engaging through sheer enthusiasm alone. 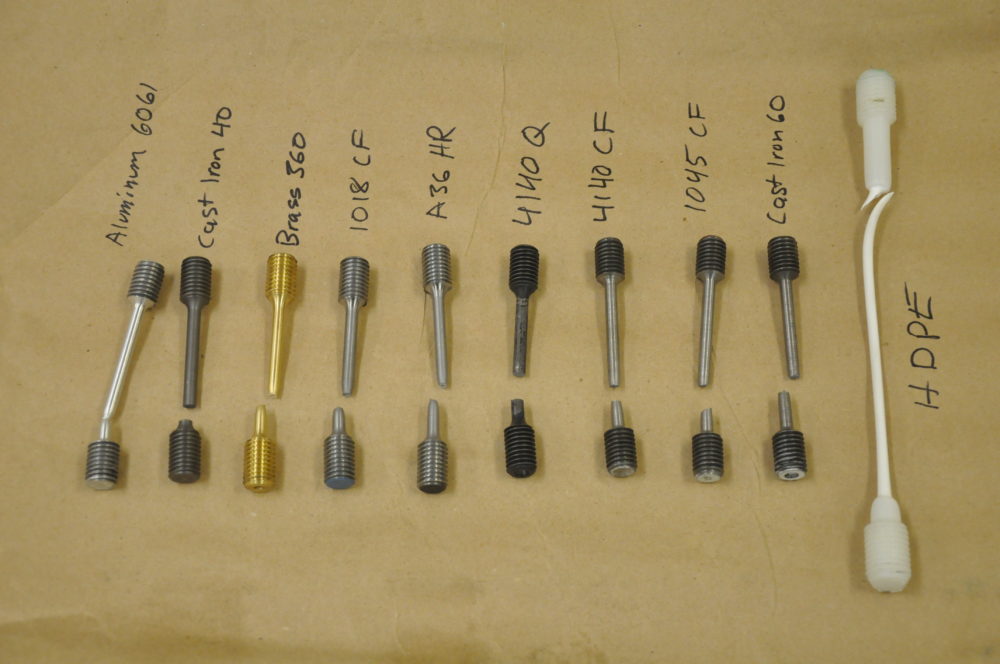 To be honest, I kind of miss the PSet structure of the last class. Although it is nice to not have a looming deadline and a difficult set of problems every single week, I worry that material is slipping away from the confines of my brain. This is not a popular opinion amongst MIT students, I know, but I find it much easier to grasp material when I’m forced to do it for a grade every week. We have a quiz coming up for this soon, so we’ll see how that goes.

Apparently, this class and 1.035 used to be a single, 18 unit class, so there’s a fair amount of overlap between the material, which is nice for me. This class, much like the name states, really focuses on soils⁠05 which is not just the brown soil you think of, but also sands and gravels and clays and how they’re a bit unique in engineering. Much like 1.035, this expands on 1.050, which focuses on Solids. Soils, while not typically thought of as a building material in present day, are vitally important for most engineering across the globe.

Firstly, basically everything is built on top of soil. It’d be a bad look if your newly constructed home sank a few inches and everything was out of line. Second, soils, unlike other materials like concrete and masonry, are very susceptible to changing different properties, like how much water is present, how compressed it is, how much space there is between particles, and so on. It’s important to know how these different factors affect engineering performance, because if your structure suddenly fails because it rained very hard one day and can no longer support itself, that’s very bad.

I’ve been enjoying this class more than I expected, to be honest. There are just 4 people in the class, and the size makes it really easy to ask the questions you want to try to learn. Although I don’t feel particularly invested in soils, it’s nice to learn just for the sake of learning, in a class environment that allows that. The pace feels reasonable,⁠06 a blessing for any MIT class, tbh and our professor is so genuinely interested in the subject that it’s hard not to get a bit interested, too. I feel like I’m using knowledge from last semester and expanding on it, instead of just forgetting it as soon as the class is over. Plus, now I can watch movies that use quicksand as a plot point and actually understand how it works.⁠07 and how exaggerated it is in film

This class is a statistics course that expands on 1.010: Probability and Causal Inference, a class required by all Course 1 majors. So far, I find myself getting lost at the speed in which we learn material, and all the greek letters we use.⁠08 and their overlap with my other classes. <em>sigma</em> is both stress and standard deviation, <em>rho</em> both density and autocorrelation, it never ends I must admit, I am bad at statistics. But, I keep trying to channel my knowledge from taking AP Statistics in high school more than four years ago, hoping it will keep me afloat. I think it’s working, so far.

One good thing is that this class is just 6 units, which is half the units of an average class at MIT, and thus, half the amount of time. Sometimes, that just means you have a “half” class the entire semester. Other times, as in this case, it just means you have a full 12 unit class, for half of the semester. So, right now, it’s as if I’m taking 5 full classes, which is not something I’d ever recommend anyone do by choice. Luckily though, it’s just for the first half, so by the time my other classes start ramping up and final projects loom over me, it’ll be over. I just need to hang in until Spring Break.

As much as I’ve become a crotchety old⁠09 only metaphorically student who hates working past 10pm, this 7pm to 10pm humanities course has been really interesting so far.⁠10 even if it makes me extend my tuesday night no-work limit Our class is entirely based around readings and discussions (both during class and in a dedicated Slack channel) centering the portrayal of gender in the media, though that often intersects with portrayal of race, class, sexuality, and other facets of identity. We’ve watched presidential campaign ads and talked about targeted audiences, read about the concept of an Oppositional Gaze coined by black women when engaging with media, and went to a special screening of Carol at the Brattle Theatre in Harvard Square, where my professor gave a talk. This week’s discussion centers around women in presidential campaigns throughout history (though it only extends as far as 2008), which feels relevant with Super Tuesday happening just yesterday.

I usually look forward to this class every week. Personally, I love discussion based classes,⁠11 especially more now that i no longer feel too nervous to participate and the material so far has been both informational, and centering topics I already enjoy reading about. Plus, I think everyone in my class is invested in the material, too, so we have really productive and engaging discussions.

Building Information Modeling, also known as BIM, is a way to model structures, in a way that differs from traditional CAD or 3D modeling. It’s sort of an industry standard in a lot of engineering practices, so it’s important to know the ins and outs of the software. One of these, and the one we’re focusing on in this class, is called Revit.

To get a grasp of it, on the first day of class, our professor showed us various slides containing a few questions. Like, what is a wall? It may seem obvious to you, when you imagine this question in your head, what a wall is. But truly, what is a wall? To a structural engineer, it can be a structural element that supports a load from above. To an architect, it can mean a physical separation between a space. To a psychologist, it can be a metaphysical representation of separation. To a traditional 3D modeling software, a wall is a rectangle, extruded to a certain thickness.⁠12 unless it’s curved, or has a different silhouette, but for simplicity’s sake let’s say rectangle It exists simply as a collection of lines and points and planes, and nothing more. It knows nothing of space or separation or loads.

In BIM, a wall is a wall. Or, what engineers and architects and contractors decided what a wall is. To them, a wall is a partition used to separate rooms. It is a space to put pipes and wiring. It’s a surface for a window, or a door. When you place a wall, the software knows it’s a wall, and will treat it accordingly. Using this method, the software can show different representations of a wall that are in line with common practices. So, when you model a wall in 3D, you can also see it represented as a floor plan, exactly how a wall would look. Or, when you put a wall, it also knows that that indicates a separation, and knows that now there are two separate rooms, rather than one large shape with a division. For a clearer picture of how it works, I like to think of the Sims’ house building tools. It works similar to that, as in, everything is in categories, walls can be placed on the ground, and then windows, ceilings, roofs, and doors can be placed on those.

Right now, we’ve been tasked with modeling buildings by Alvar Aalto, an architect who designed one of the undergraduate dorms here, Baker House. Mostly, I’ve been trying to learn to use Revit for complex design, which can be incredibly frustrating at times. I’ve never been a huge fan of 3D modeling in general, but I sure do miss traditional modeling in Rhino whenever I have to work on my assignment. I spend most of my time trying to figure out how to make simple figures, like a non-traditional roof or a mezzanine, googling desperately and hoping someone else on the Internet has run into the same problem. Despite my inability to work efficiently in this class, my model doesn’t look too bad so far. 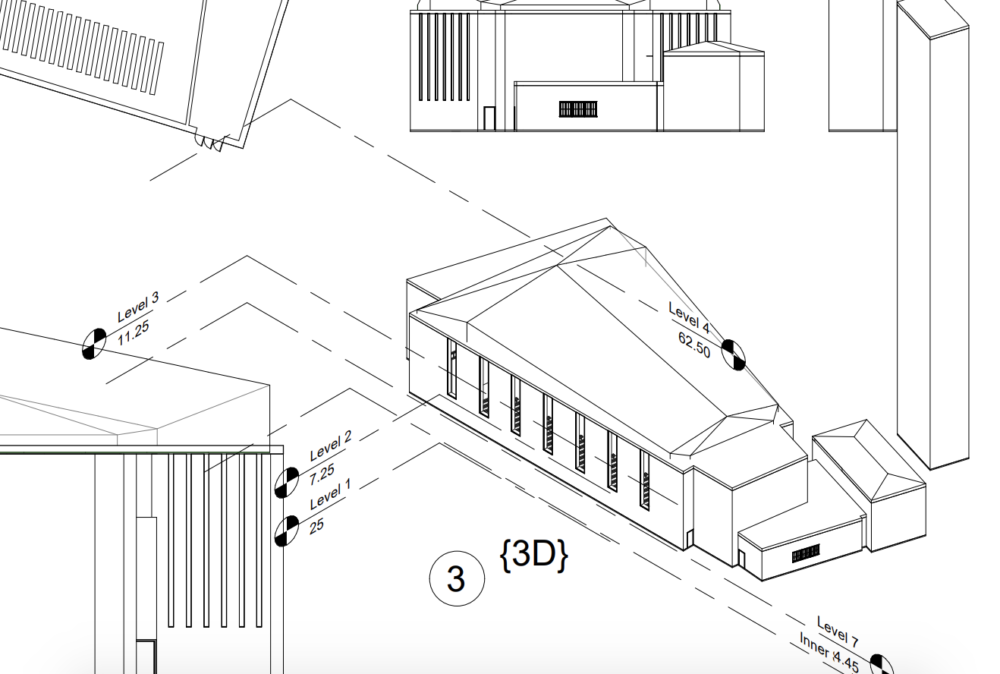 Besides classes, I tend to focus more on my personal life—lifting four times a week, writing for fun, cooking at least once every other day (but mostly every day), keeping my living space clean, walking to and from home multiple times a day because I love being inefficient with time and enjoy the simple pleasure of being Home, sleeping, and generally hanging out with friends. I can’t say I don’t miss the thrill of having a jam packed schedule of extracurriculars and meetings to go to, but it’s also nice to have balance and separation. Just look at all that free space!⁠13 unfortunately, this does not translate to having a lot of free time

That’s all I have planned for this semester, so here’s to manifesting some good energy for the rest of it.