And you'll have to work to get it back

One of the many unique and altogether unavoidable aspects of MIT life is the mailing list. Mailing lists are powerful tools that allow people to contact a large number of other people whom all have a common interest. Most sporting groups, clubs, class groups, dorms, floors in dorms, classes, councils, and recitations all have unique mailing lists. It’s impossible to avoid getting added to many MANY mailing lists during your time at MIT. By the end of my four year stint I believe I was on ~200 different mailing lists. This isn’t unusual.

There are some mailing lists that only see use for a semester, others that get used for a year or more, and still others that are used for four or more years. Many mailing lists lack clever names and all of them end with @mit.edu. Since they lack clever names it’s usually pretty easy to recognize patterns (or guess what a group’s mailing list name might be). Take, for example, the mailing lists that are used for contacting an ENTIRE CLASS of students. We’re not talking about a math class here, we’re talking about a class of 1000+ admitted students. Each has a very simple naming scheme and a little research showed that all of the class mailing lists up until the class of 2015 had been created and had owners, likely administrators at MIT.

So, what’s a group of PSETing MIT students at 2 in the morning to do when they discover such a pattern? Create and claim ownership over the first unclaimed list, duh! So, back in 2009, four tired, grumpy, overworked, and snickering MIT students stole the class of 2016’s mailing list.

BWAHAHAHAHAHA!!! Oh my god, it was hysterical. Seriously, we were soooo proud of ourselves. We could hardly stand it. We told everybody!!!

Actually, we just chuckled, didn’t tell anybody, and forgot about it for three years :)

Tonight we got an angry email claiming that the class of 2016 class council was upset and wanted their list back.

But, just giving the list back would be too easy, far FAR too easy. So, here’s the plan, ladies and gents –

The name of the game is a photo scavenger hunt. Upon receiving photos of freshmen from 9 of the 12 undergraduate dorms spelling MIT in the traditional 4-person pose SOMEWHERE IN THEIR DORM we will release the mailing list. Here’s an example: 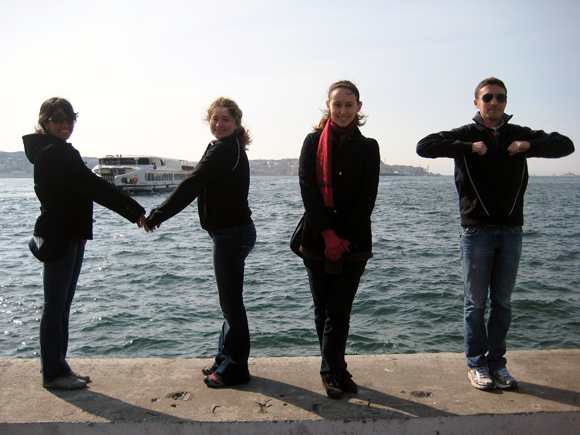 To further sweeten the pot, the freshmen with the best MIT picture and in the coolest location within their dorm will receive four flaky biscuits and a set of magnetic buckyballs to share among themselves.

Prospective freshmen, please enjoy watching this year’s freshmen scrabble to reclaim custody of their mailing list :)  While this blog entry isn’t necessarily aimed at you, hopefully it gives you a peak at some of the fun shenanigans that happen from time to time.

Finally, just as a reminder, we were all freshmen at one point. No matter how hard it seems, you’ll get through it, it’s just school. Here’s (from left to right) James, Yuki, Sauza, Jordan and yours truly way back in 2008 on Conner 2, “collaborating” on Mastering Physics, just like you!!! 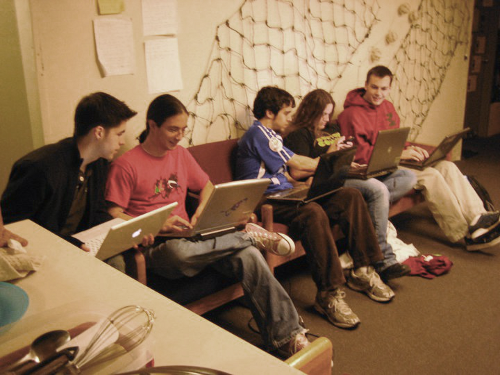