i’ve been thinking, recently: in times of need, who takes care of me?

of course, growing up, the answer was my family. i woke up one morning craving the napa cabbage and meatball soup that my dad used to make. along with the phantom taste of salt and light broth on my tongue, there was something bittersweet, knowing that it’s not something i’ll experience again for a while.⁠01 i've mentioned it before, but both my parents are currently overseas, and with covid restrictions it's hard to see them. my mom's coming back over the summer, but i'll have to find time to go back to china if i want to see my dad, which might be difficult given the average mit student's obligations year-round.

and when i was sick a few weeks ago, i found myself desperately missing the ginger-jujube-brown sugar tea that my mom brewed whenever i was feeling under the weather. (when i told her this, she said she was going to mail me a bunch of packets so i could make it myself.)

i try to emulate the ghosts of my parents’ actions by dutifully drinking banlangen and hot water, not cold water, and taking an assortment of other chinese herbal medicines. i’m not a traditional medicine expert so i’m not entirely sure what they do, but they do make me feel better by virtue of being something familiar–something that reminds me of home and childhood.

still, it doesn’t change the fact that when i get sick now, it’s up to me to manage my symptoms and judge if i’m functional enough to do certain things. i guess having to shoulder the responsibility of taking care of myself is just another marker of the transition to full adulthood. it’s a funny stage of life that we’re in right now.

i have been ruminating on care, in all its forms, and it boils down to three categories:

i think the meaning of self-care has been somewhat diluted over the years. it brings to mind bath bombs and face masks and indulging in a bit of luxury. “self-care is buying yourself a little treat so you can get through the day” is a common phrase i’ve been seeing on twitter lately.

and all of those things are definitely very nice. who doesn’t like getting little treats? like, i love going to paris baguette⁠02 it's a bakery in hmart, so every time i go get groceries it's always there to tempt me and buying a slice of cake with a macaron on top. it feels wonderfully decadent. calling it self-care isn’t wrong, because treating yourself is a form of caring about yourself.

but i think it somewhat frustrates me because it also feels like it has been commodified by capitalism. i see ads that are like, “buy x product because you are a girlqueen slayboss #selfcare #yass!”

self-care, in my opinion, is a lot less glamorous than that. sometimes it’s just the act of putting my phone down when i’ve been stuck in a scrolling loop, paralyzed by existential dread. sometimes it’s replying to messages and emails that i’ve left to sit for weeks, because the longer i put it off the worse it is going to be for my mental health. it’s asking for extensions on psets and essays when i need them and bracing myself against the feeling of being admonished for not reaching out earlier. it’s responding to my body signals instead of ignoring them. it’s pulling myself out of my slumps and bonking my head and being like, “hey, okay, let’s get it together.”

it’s knowing what i need and following through on those needs.

but i have been trying really really really hard to find peace in the mundane, menial tasks that must be repeated every day. i feel like every other post i make is about this.

maybe that’s what camus was talking about with imagining sisyphus happy. or whatever.

on being taken care of

i think another marker of adulthood and self-responsibility is actually learning to accept help from other people–and actively asking for that help.

when you’re a kid, you typically don’t have to go out of your way to ask for things, because your parents are supposed to provide for you already. but then you move out, and now there’s no one automatically tuned in to your needs, and you have to teach yourself how to depend on other people or manage it alone.

you don’t have to go through things alone, and you’re not supposed to. humans are social animals. we’re built to help each other in times of need. most of the time, when people say to let them know if you need anything, they genuinely mean it. realizing this is the first step.

it’s like that time when i was experiencing heavy side effects from the third shot back in december and rui and tiffany and sarah brought me food and we all sat in a circle on my dorm floor and ate it together.

or when i was having my breakdown in february and multiple friends reached out to me letting me know that they were there if i needed a shoulder to lean on or someone to vent to.

or when i asked selena if she could drop off a covid test for me because i was feeling way too weak to make the trek to medical (even though it’s a lot closer for me than it is for my west campus friends).

or more recently, when i was in the throes of my mysterious plague in late april and i was miserably curled up in my room and i couldn’t sleep and chris brought me strawberry cough drops, because she wasn’t sure which flavor to get but strawberry seemed to fit my vibes.

or when east side festival⁠03 an annual celebration of east side culture, where a bunch of alumni come back to campus and tell stories and there's a giant feast in the courtyard as well as a bunch of other fun stuff was happening and i could hear all the music floating up from the courtyard and people laughing but i was still sick, so i asked chris to get me some food and she came upstairs with two giant plates.

it’s all these little moments that remind me that people care!!! and accepting their care is a form of self-care, too.

below is a piece from an artist i like that feels relevant, and a playlist i made when i was feeling particularly cared for despite being sick:

on taking care of others

when chris got sick towards the end of the semester, it was a little rough because it was the week before finals. i then made it my prerogative to bring her as much food as i could over the next few days, as well as some egg socks from hmart (they sell them for like $2 in the new home and cookware section now!!)

at one point, i was walking to sevlev late at night because she’d asked me for some gatorade. we were on the phone together because i was alone, it was midnight, and i didn’t want to be kidnapped without anyone knowing.

i walked past the giant tents they’d set up outside of stata recently, the ones with the hardwood flooring inside, and crossed the street, making my way past area four and the taqueria with a glowing neon sign that says “feed me tacos and tell me i’m pretty.”

entering sevlev, i made a beeline to the drinks section, grabbed gatorade, lingered in front of the ice cream for a bit before choosing a thing of ben and jerry’s, and made my way to the cashier.

chris had also asked for cheesy bread, which is just what it sounds like: bread that is cheesy. 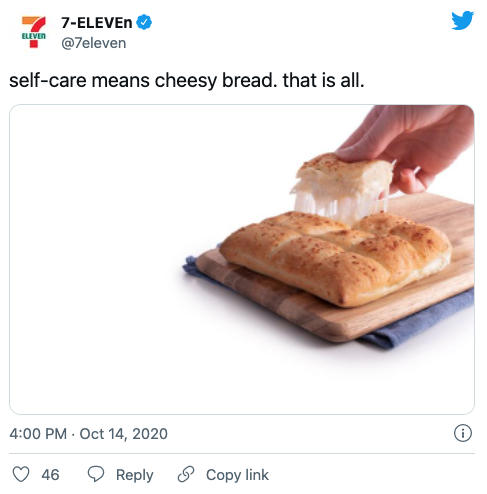 you have to ask the cashiers to warm it up for you, so:

“uhh, do you guys have cheesy bread?”

the employee held up a cheeseburger packet. “do you mean this?”

an awkward silence as both of us tried to process the situation–the employee was trying to figure out what the hell i was talking about, and i was trying to remember what cheesy bread looked like because the last time i got it i was paying a lot more attention to how it felt and tasted in my mouth than its appearance.

i heard chris giggle on the other end of the line.

“hold on,” the employee told me. he yelled for the other person working in the store, who came over and looked at me inquisitively.

i offered a weak smile. “i was just wondering if you guys have…cheesy bread?”

he beamed. “ah! cheesy bread! yes, we have that. you want one or two?”

“one is fine,” i said, breathing out a huge sigh of relief as he warmed it up in the…oven/stove/possibly microwave type thing. i don’t know, i wasn’t really looking that closely.

all i know is that a couple minutes later i was walking out of sevlev with two bottles of gatorade, ice cream, and a warm thing of cheesy bread, its delicious scent wafting up into my nose–soon to be delivered to chris’s door.

when i’m at tech callers, i tend to end a lot of calls with “take care,” which i think is cute. it’s a habit i picked up from the alumni i’ve called–no matter how short the conversation was, they’ll still tell me to “take care” and if they’re feeling a little more talkative they’ll wish me the best of luck at mit.

it’s a small, almost mindless thing, but it’s one of those sweet little tendencies of humanity, to wish well for strangers.

i’ll leave you with one of my favorite poems: small kindnesses by danusha laméris.

I’ve been thinking about the way, when you walk
down a crowded aisle, people pull in their legs
to let you by. Or how strangers still say “bless you”
when someone sneezes, a leftover
from the Bubonic plague. “Don’t die,” we are saying.
And sometimes, when you spill lemons
from your grocery bag, someone else will help you
pick them up. Mostly, we don’t want to harm each other.
We want to be handed our cup of coffee hot,
and to say thank you to the person handing it. To smile
at them and for them to smile back. For the waitress
to call us honey when she sets down the bowl of clam chowder,
and for the driver in the red pick-up truck to let us pass.
We have so little of each other, now. So far
from tribe and fire. Only these brief moments of exchange.
What if they are the true dwelling of the holy, these
fleeting temples we make together when we say, “Here,
have my seat,” “Go ahead — you first,” “I like your hat.”