TBT: The Science of Chocolate by Kirsten L. '15

The school down the street does cool things

(Sorry if you were expecting to read more about MIT, but exploring outside the MIT bubble is an important part of being a student here!)

One of the best things about going to school at MIT is that you get to live in an amazing urban environment (aka Cambridge/Boston) where there’s always a TON of things going on. Since it’s my senior year and I have this intense fear of missing out, I’ve definitely made an effort to get out and explore! Even if that means making the trek down Massachusetts Avenue towards the other school down the street…

Occasionally, cool things happen at Harvard. The only Harvard class I’ve ever been interested in trying to take (but know I could never get into due to its popularity) is this class called “Science and Cooking: From Haute Cuisine to the Science of Soft Matter.” Even though I’d never be able to take the class, anyone can get in on the action by going to these public lectures that are associated with the class lecture from the week. What’s really cool about these lectures though is that they’re taught by famous chefs and food experts.

My friend and fellow baker Jasmine ’15 looked through the course schedules early last fall and found the one that really jumped out at us- “Heat Transfer and Chocolate.”

One lovely October day, Jasmine and I hopped on the bus to go visit Harvard. We got there really early to make sure we’d get a seat. Of course, for Jasmine and I, really early actually meant so early that there’s not even a line yet. Oops. But as the good MIT students that we are, we came prepared to work. 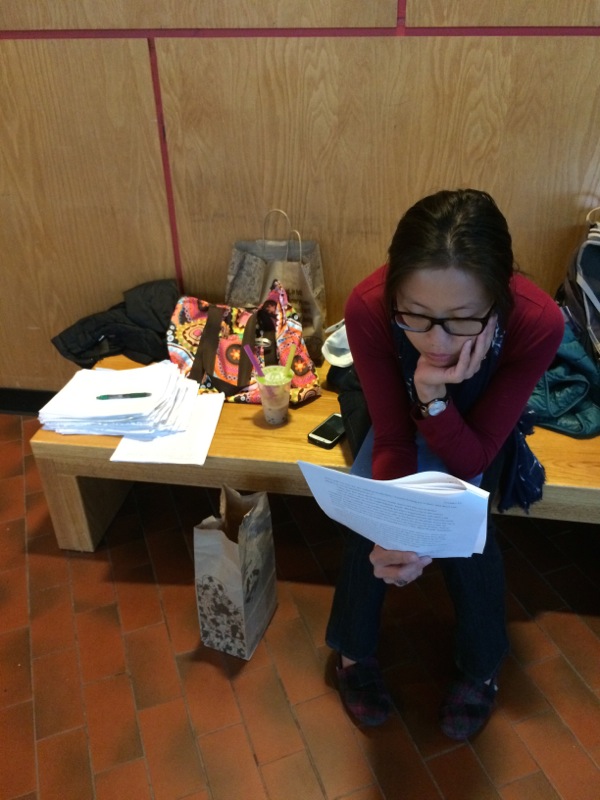 Eventually, they started setting up for the lecture. The decorations were awesome- they had balloons with the equations for surface tension on them. 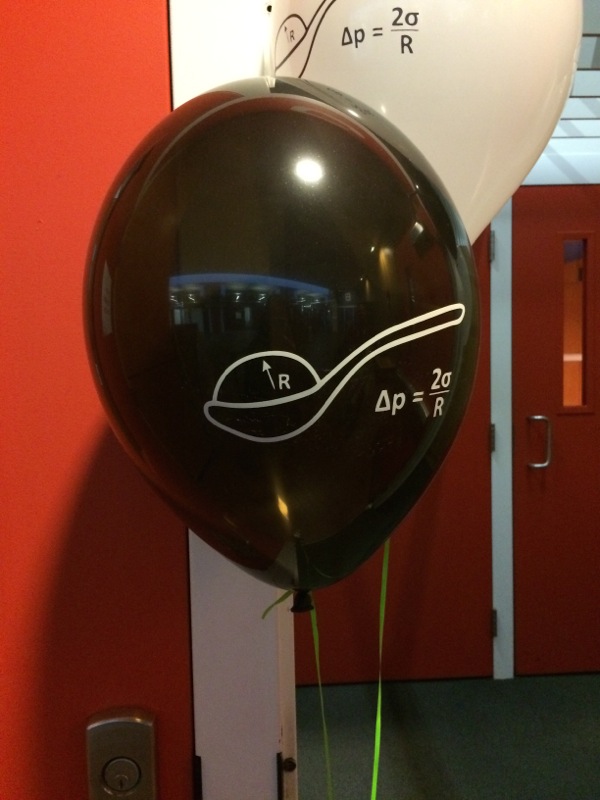 Eventually, a very long line formed behind us and it was time for the show! 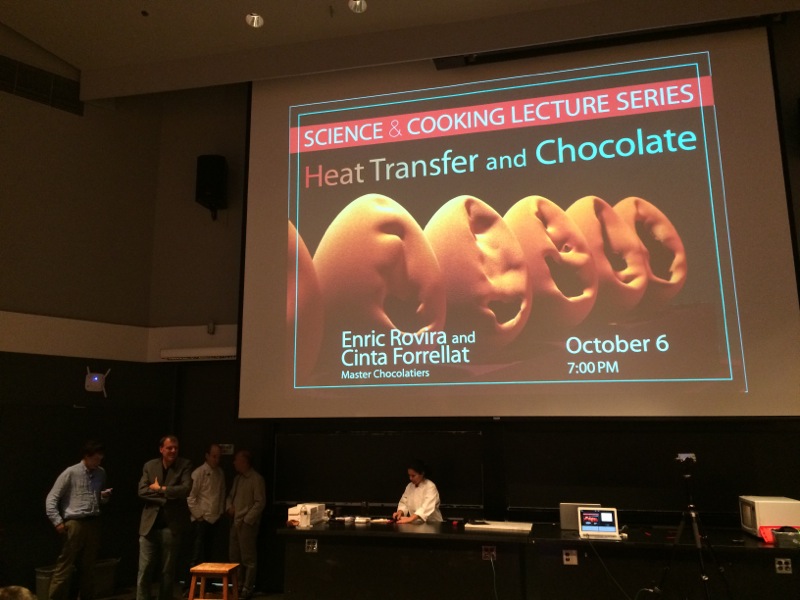 Science and food!?!? What could be more exciting?

Our teacher for the night was Enric Rovira. He’s a master chocolatier in Barcelona, who is well known for his egg sculptures. 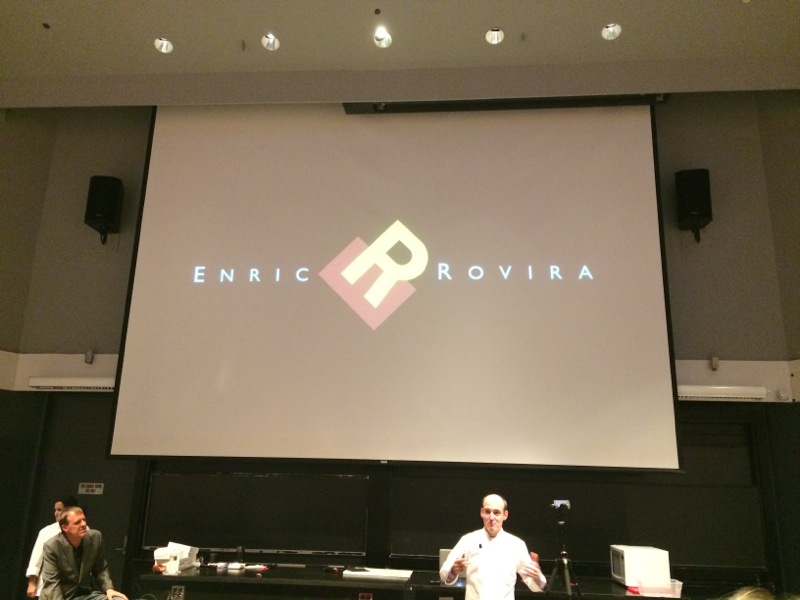 We began our tour of chocolate with a overview of the history of chocolate and the places around the world that consume the most chocolate (clearly Germany and Switzerland have the right idea). 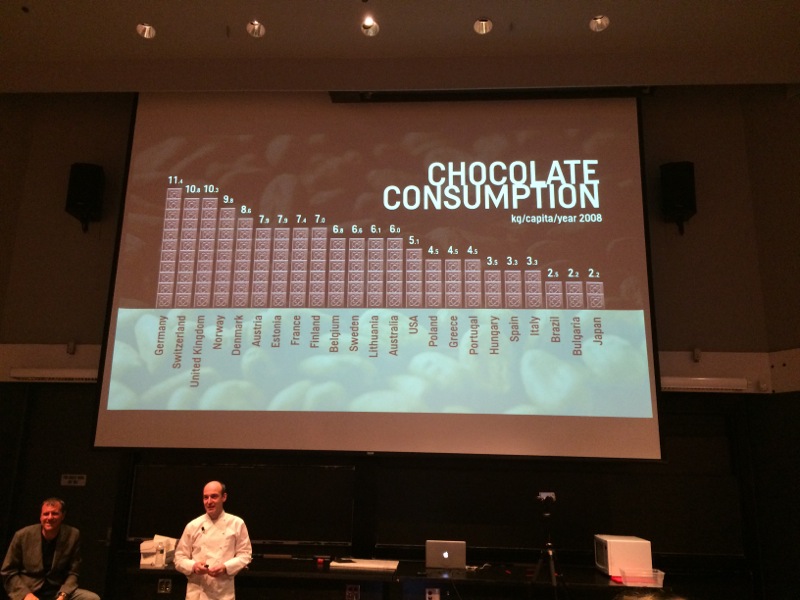 Then things got more serious.
We dove into what chocolate is made of. Turns out it’s made of this beautiful looking bean- the cacao bean. 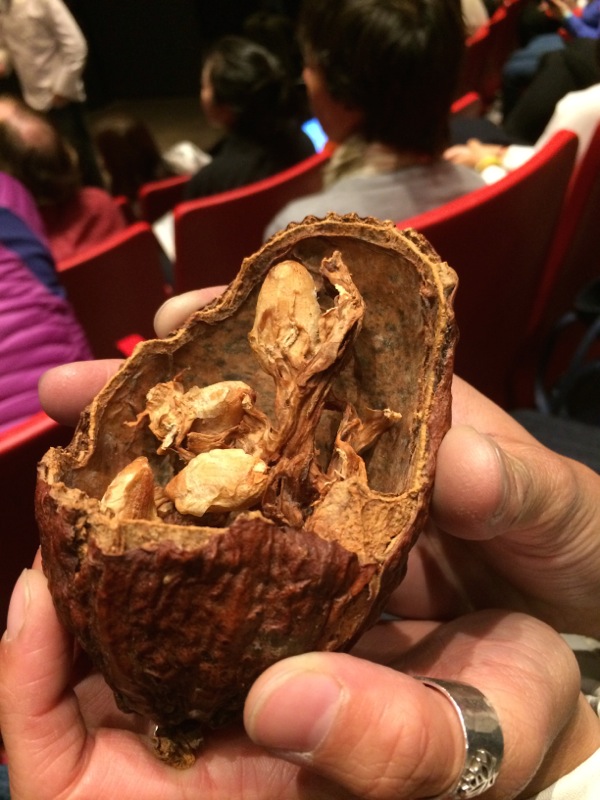 We learned about the composition of the different types of chocolate.
As you get less brown in color, the percentage of cocoa decreases (surprise).
What actually might be more surprising is that white chocolate contains no cocoa powder… so in some ways it really isn’t chocolate. 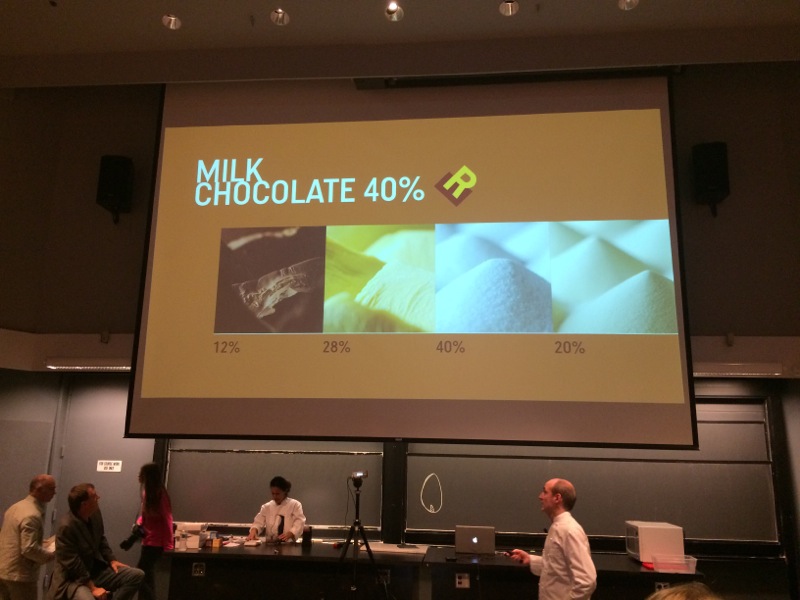 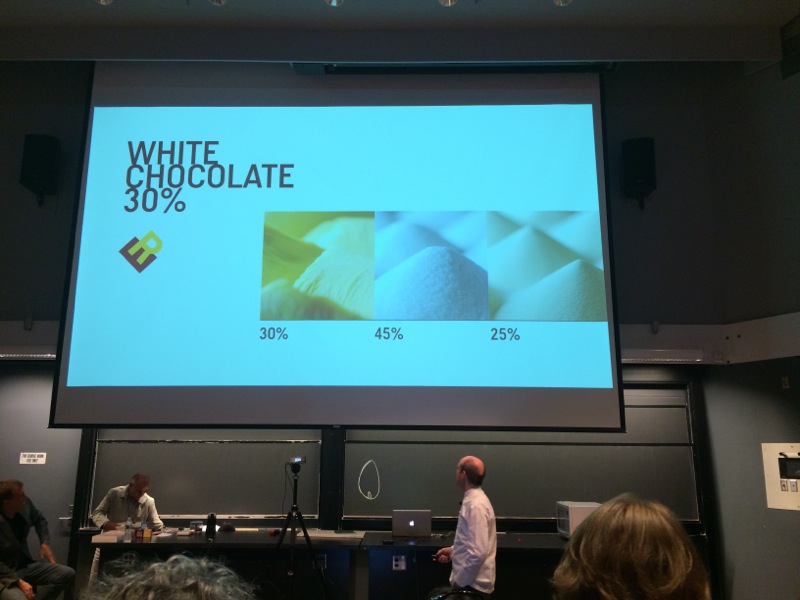 We learned about the different phases of chocolate at different temperatures. 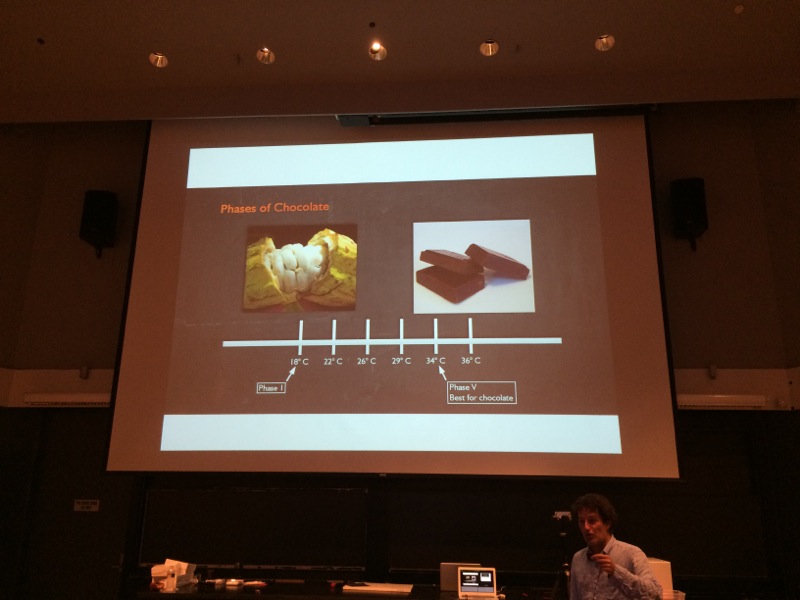 Most interestingly though, we learned about the crystalization that occurs in chocolate! Who would have guessed? 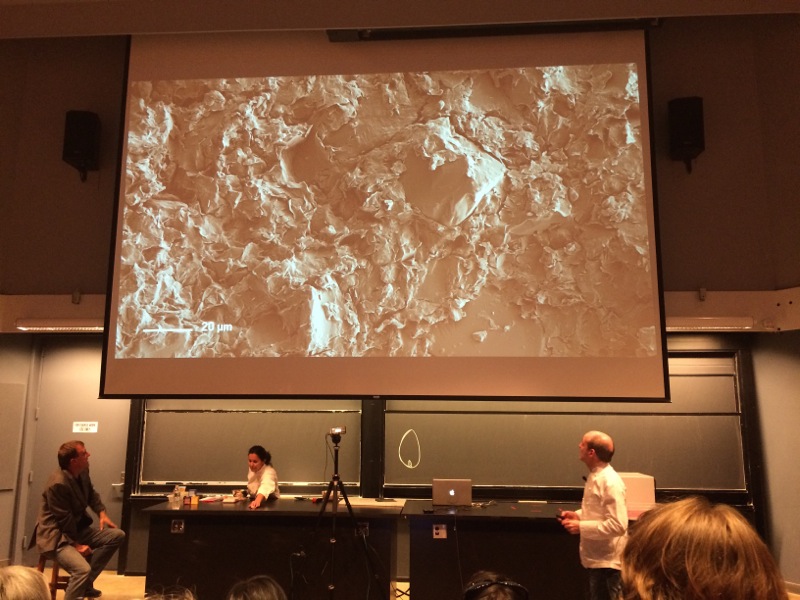 Turns out this crystalizaiton is very important to achieving different forms of chocolate. The crystalization is affected by the temperature at which the chocolate is subjected to over the cooling process. Unfortunately, my ability to remember what I learned a couple months ago is quite poor, so all I have to show for this is a chart :/ 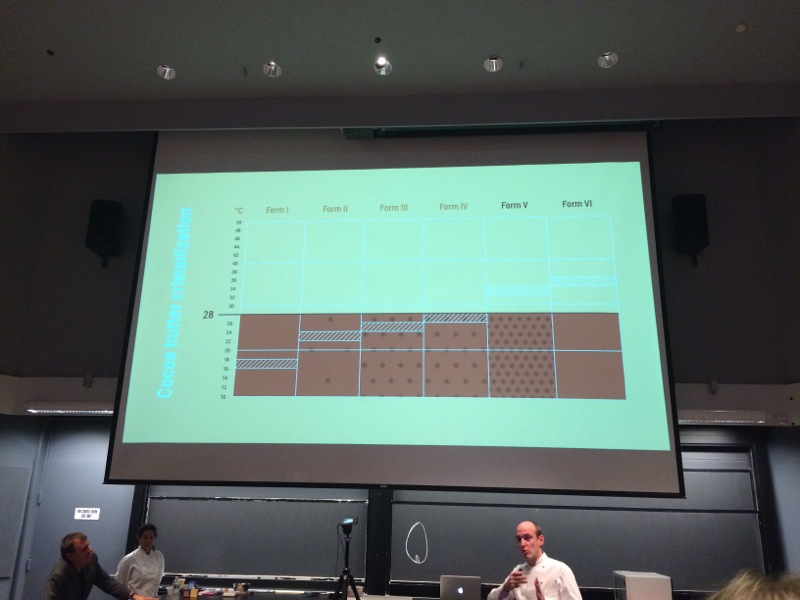 At the end of the presentation, Enric did some demos to show us the difference between different forms of chocolate. Chocolatiers use a process called tempering to bring the melted chocolate to the correct temperature. This allows for the formation of the correct type of crystals in the chocolate. Here you can see the difference between chocolate tempered in different ways (one is glossier than the other). 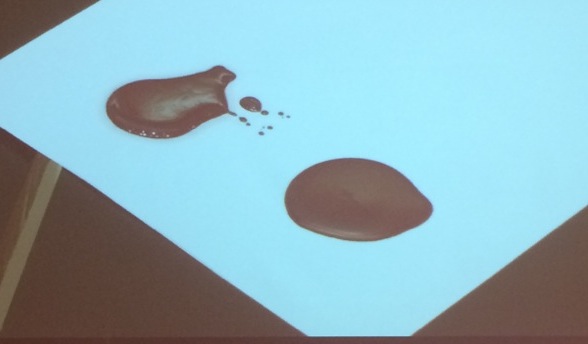 All in all, a neat opportunity to learn more about two of my passions: food and science. 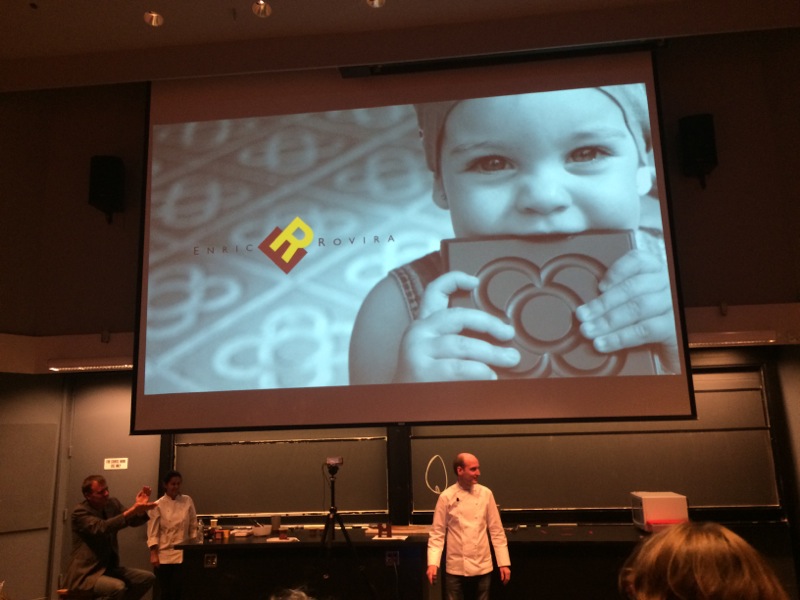