Four MIT students are spending the summer racing 8000 miles across Europe. Find out why.

“The mother of all adventures, the Mongol Rally is an 8000 mile dash across пњљпњљ of the earth’s surface in cars that most people consider underpowered for doing the shopping. We have no entourage of support vehicles, there is no carefully marked course, there are no professional drivers, fast cars, or even good cars. It’s just you, your pants-mobile and thousands of miles of adventure.

“Not only do we provide the world’s most extreme car challenge, you get to save the world at the same time. The Mongol rally is a charity event raising money for some fantastic organisations.”

The group of MIT of students who have entered the rally has named itself the Tech Nomads.

We polish of our drinks at the launch party, leap into the cars and head for Dover. Once we hit the mainland we drive as fast as possible to escape the flat parts of Germany to get to Prague hopefully at around 4pm, just in time for afternoon tea. There will be a big old knees up as from here on out the adventure begins.

Leg 2 (The Trinity)
Prague to Moscow, Kiev or Istanbul

The route divides into three affording a huge number of options for teams to plan their ultimate route.

A: Firstly the northern one – Checkpoint Borsch – (Moscow), through the Baltic States and on to the Russian capital for a subtle blend of vodka, cabbage and Soviet style.

B: Secondly the central one – Checkpoint Cossack – (Kiev), across the heart of the old Soviet block and through political shifts and wild plains of the Ukraine.

C: And finally the southern one – Checkpoint Byzantium – (Istanbul), A southerly charge over the miles and miles of mountains to the coffee shops and ancient winding streets of the old Ottoman capital and the bridge to Asia.

From the three Trinity checkpoints teams push further east, some through Mountains of Iran, others across the Caspian Sea and Turkmen desert, some over the Kazakh steppe and others through the forests of Russia. The possibilities for adventure are nearly endless. Once the teams emerge from the roaring heat of various deserts we all reconvene in Samarkand on the ancient silk route, where a much needed beverage or three will be found.

Winding north through the beautiful Mountains of Kyrgyzstan and into Kazakhstan for a dash north to the Russian border. Then on into the Altai region, described as the most beautiful part of Russia before entering Mongolia at it’s western tip.

Now for what can only be described as the most amazing driving in the world. And you thought ripping across the desert was fun! There are a loads of routes across Mongolia, all of them incredible and very very little of it will have any sort of road surface. Your maps will be practically uselss, roads move all the time, every where has the same name, there are no sign posts, rodent holes replace pot holes, the fun just goes on. Imagine drining off road across a deserted green valley with wild aromatic grasses scenting the air as you go, what could be better?

Once/if you get to the finish, which will be in the Ulaan Baatar area, all that will remain will be to sit back in the comfort of your ger and enjoy a well-earned drink as the sun sets over the mountains. 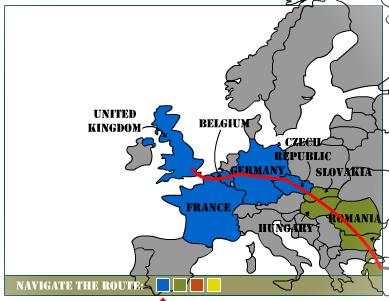 They’re doing this whole thing in support of two charities:

“Send a Cow is a Christian charity that enables poor farmers in Africa to become self-reliant by providing them with livestock, training and advice. We work with some of the most vulnerable groups in Africa, including children orphaned by war, families affected by AIDS, and disabled people.”

“Mercy Corps works amid disasters, conflicts, chronic poverty and instability to unleash the potential of people who can win against impossible odds. Since 1979, Mercy Corps has provided $1 billion in assistance to people in 82 nations. Supported by headquarters offices in North America, Europe, and Asia, the agency’s unified global programs employ 2,700 staff worldwide and reach nearly 10 million people in more than 40 countries.”

If you want to support these students and their charities, please go to their website and make a donation. You can contact them at [email protected]