What really happens during a 9-to-5 job? Is it possible that people really just sit in front of a computer for 8 hours a day? Do you work on the same code all day? All questions that concerned me and the next 40 years of my career. Well, this reporter’s got the inside scoop, having infiltrated the Google Pittsburgh office this summer as an intern.

Disclaimer: My experience was pampered by the incredible spoils that come with working at a large tech giant, and the perks were an added bonus to the interesting problems I tackled and the imposter-syndrome-inducing people I met. These opinions are in every way my own and don’t reflect Google’s views.

I was on a Site Reliability Engineering team, which managed the data center lifecycle. More specifically, I was helping automate the launch process for new data centers. Some days flew by packed, and others dragged me a through the molasses stereotype of a 9-to-5 desk job. I’ve blended together a few that had busier schedules.

8:20am, Apartment Elevator: Rush out of the ridiculously muggy apartment.

For reasons unknown to me, this very tall apartment building seemed to only support AC on the lower floors, or perhaps only those on the first few floors dared to install their own AC, lest their self-assembled window units accidentally plummet from the rather shaky window frames and maul someone on the sidewalk below. The already balmy air made the power outages from the fallen trees (victims of Pittsburgh’s nearly weekly flash floods) less of a big deal. I should probably also mention that a friend and I managed to snag our apartment for a paltry sum of $450 each a month, a thought which cooled me down during 95º nights.

Pro-tip: if you want to build up savings fast, up-and-coming tech scenes like Pittsburgh are the way to go. The cost of living (as measured by a cup of boba) is much lower, and there’s a bunch of green space, courtesy of the steel-era millionaires Frick and Carnegie. I digress.

8:45am, Elements Cafe: Arrive from the 71C bus in time for a buffet-style breakfast. They really make this the best meal of the day, and I think it’s all part of a plan to entice you to roll you out of bed and into your desk early. Here’s an example plate: 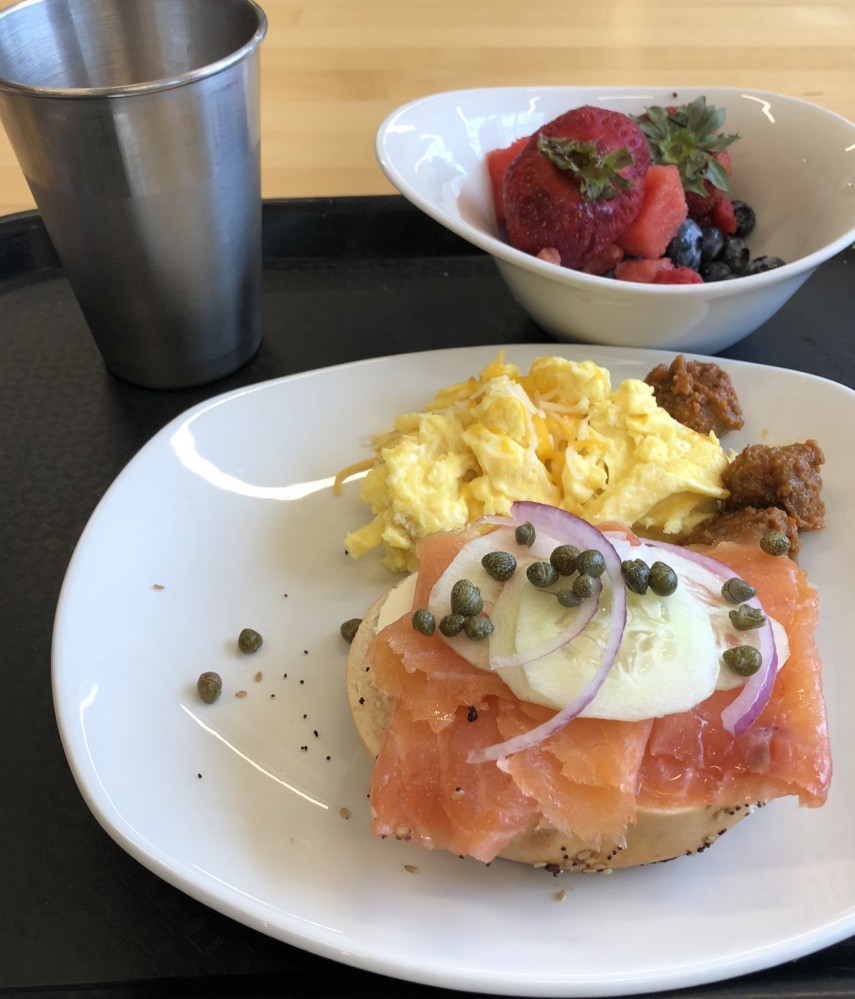 9:17am, Treehouse Cafe: Grab a coffee (or chai tea, in my case) from the rockstar barista, en route to my desk.

9:20am, Nice Window Desk (no cubicles in sight whew): Work on my design document that outlines the code changes I’m planning, the reasoning and research behind these decisions, and expected outcomes and implications of the implementation. Send it to the rest of my team for review and solicit comments.

10am, Large Meeting Room with Fancy Video Calling Capabilities: Listen to the latest developments from the team manager and last primary on-call. My project touched only a small portion of their workflows, so mostly, I listened, and sometimes, I’d give an update or two about my project and how it might actually be used in production (!!).

Being on-call seemed like the equivalent of serving a shift in the emergency room of a hospital in the safest part of town. Usually, there weren’t too many major incidents because infrastructure of the 20-year-old company was pretty stable. Every so often, however, your code, or your team’s code, or someone’s code halfway across the world, which your code depended on, was infected with a virulent bug (read: code that broke other code and so on and so forth) that it’s immune system (error handling) didn’t know how to fight, and it was up to you to save everyone involved. Or something like that. They never blessed me with an on-call shift (and rightly so because I could solve a code crisis about as likely as I could save someone’s life in the ER), and so this info, I gleaned from the other engineers.

11am, Smaller Meeting Room with Comfy Swivel Chairs: A one-to-one meeting with one of my two hosts where we discussed my progress, design decisions, or possible career paths within Google and beyond.

11:30am, Teaching Kitchen in Elements Cafe: Time for a KitchenSync cooking class with Chef Karbowski!

This was my attempt to learn how to adult a little more, and as a result, I can now julienne vegetables like a professional chef. Actually cooking them is a goal for another summer. Classes started with some technique and safety to save fingers from being julienned too. Then, they transitioned to the stovetops, where they ranged from gyozas to peach bruschetta. I appreciated that Google realized that my wellbeing also depended on my extracurricular effort, including me feeding myself.

That brings me to yet another digression. Code quality is impeccable. Each change to the codebase has to be checked by at least one engineer, who has a readability certification in that language, and usually two or three. There’s also a battery of tests from any code your changes touch that have to pass, in order for you to begin to submit your version. At school, if my code is passing the given tests, and I’ve deleted all the commented-out code, I consider that to be pretty satisfactory work. That does not pass go, nor collect a paycheck in the real world, especially when that world is serving about one billion users globally.

3pm, Desk: Take a 5 minute meme break. Try really, really hard to make a meme and be funny, but when asking nearby team members for feedback, they stare a little too long, laugh a little too hard, and ask if the whole thing was supposed to be an anti-joke, whatever that means. Give up on trying to raise my meme score, and decide to stick to what I know (for loops and if statements).

4pm, Balcony Outside the Microkitchen with an Iced Tea: Meet up with this really cool designer that my mentor introduced me to, who’s working on conversation design for the Google Home. It’s in this new field called VUI (Voice User Interface), where instead of physical screen mockups, they develop example conversations.

Take a quick stretch break, and grab some salt and vinegar chips from the microkitchen.

4:30pm, Walking Desk: Take my laptop to a walking desk (think: standing desk with a treadmill underneath) to make up for the fact that I again failed to wake up early to go for a run. Submit the finishing touches on the latest batch of code, and go look it up in the codebase to double check that it’s really there!

6:30pm, Elements Cafe: Head to dinner with the rest of the interns, and then a movie theater to take advantage of MoviePass before it goes bust.

Sometimes, there’d also be intern events, like a boat cruise or an Escape the Room. We had an intern class of only about 40 people, perfectly small enough to be conducive to getting to know everybody, while also large enough to take over a whole row of tables at meals.

Like at school, I scheduled everything into a Google calendar, which really helped me discretize time into more manageable chunks. Honestly, the actual coding part became a lot less isolating and intimidating mostly because I often got stuck, which meant I could talk to any engineer on my team to understand the intricacies of our code, other teams in order to figure out how to best use their tools, and interns to bounce ideas off of each other.

For a full summer, I felt like an employee, who could let go of work when not at the office, rather than a student, who always carried her psets around to pull out at any spare moments. All in all, I had a wonderful summer and could see myself working there full-time. I’ve successfully forgotten the hell of last semester’s midterm seasons and am really excited to take you guys through life as an upperclassman.