thoughts on single-tasking, cheese slicers, and the tyranny of the mind

This semester, in MIT terms, is “chill.” With only one technical class, it’s the first time that the number of hours my classes are supposed to take is less than the actual number of units, although it’s a bit underestimated because of my cross-registered class.

Why am I taking so many HASS (Humanities, Arts, and Social Science) courses at a rigorous technical school, you might ask? Well, firstly, I need to graduate, and since I began considering a Spanish minor, I’ve had to backload them. Secondly, it makes me happy! I’m ashamed to say this is something that took me 2.5 years to figure out. The past few days, I’ve been walking around smiling, more relaxed, and I was actually extremely confused. My body was confused too. It had prepared itself for hours of hunching over a computer, debugging code, hours of pulling my hair out at office hours, just trying to get answers down on paper because I had given up on actually understanding it. But, this semester, I actually had time to take a walk without a point B in mind. It was magical.

It’s not that I don’t enjoy the technical classes. I do, but in moderation. In fact, I’m a huge fan of my one technical class, 6.141 Robotics, Science and Systems. The official description is: 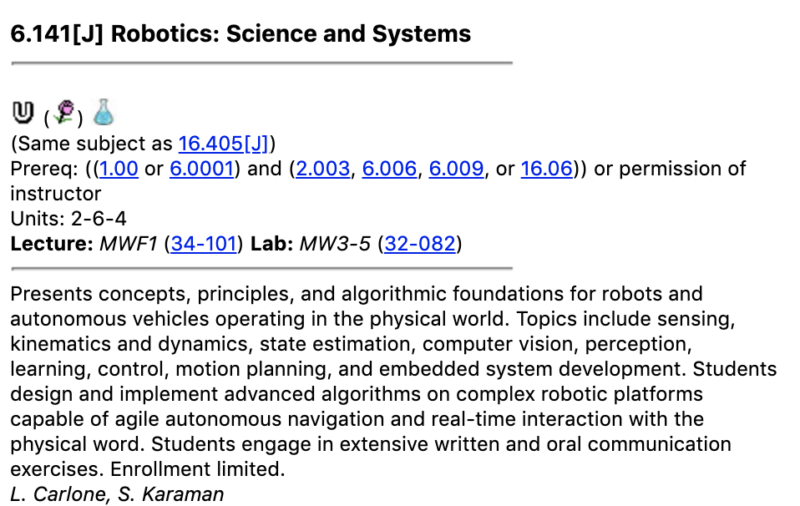 Basically, you get a crash course in robotics and controls, and then for the remainder of the semester, you and your team build a fully-autonomous racecar, complete with some very fancy, very expensive sensors like a Velodyne LiDAR Puck and ZED Stereo Cameras. By the end of the semester, you’re expected to have a working race car, design document lab report, and online portfolio. Unsurprisingly, this ends up being a significant amount of work, which is where most of my hours from firehose come from.

What’s great about having my technical focus being on this one class is that I can actually focus on it. There’s a term in psychology called attention residue. The basic idea is that multitasking doesn’t work because every time your brain switches to a new task, however menial, it takes a certain amount of transition time before you are fully able to focus on the task at hand. So, to all of you (@ me) trying to simultaneously respond to emails, scroll on Twitter, listen to an ASMR YouTube video, and occasionally scribble some math homework, I hate to break it to you (me), but IT’S NOT WORKING. 01 I got distracted for a full 20 minutes while trying to find links for this. The Internet is a dangerous black hole, kids.

I think this concept also applies on a semester scale. When I’m doing the 3 technicals, a HASS or two, UROP, extra-curriculars, etc. circuit, it feels like I’m jumping from browser tab to browser tab for 14 weeks straight. It’s hard for me to delve deep into any of the subjects I’m taking because when I devote time to one thing, it seems like I’m losing ground in everything else. And I’m sad to say that the first thing to go is always my HASS readings. So I scrape by, I do exactly what I need to do, and all the while, take on more responsibilities because that club sounds really cool, and what’s one more one-hour-a-week commitment?

But #newyearnewme. This year, single-tasking is in, and multi-tasking is so last season. Tuesdays and Thursdays, for example, I essentially only have Spanish classes. If I was really hard core, which I am not, I would only read Spanish books, only listen to Álvaro Soler (my favorite Spanish artist), and only binge Spanish TV shows (highly recommend Las Chicas del Cable). No entendería inglés en los martes y los jueves, y ¡no habría los residuos de atención a causa de los cambios de idioma! 02 I would not understand on Tuesdays and Thursdays, and there would be no attention residue from switching languages!! Alas, baby steps.

The first Spanish class of the day is at Harvard, SPANSH 81 Table Talk and Food Writing: 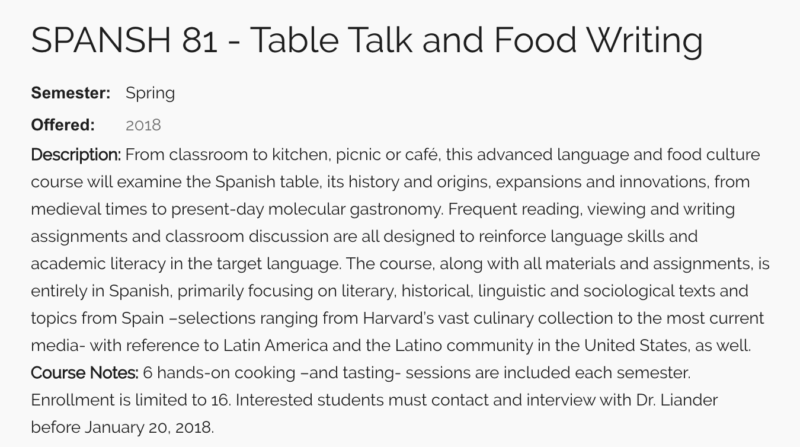 One of the best parts of this class (right up there with the improving Spanish part, of course!) are the cooking classes every other week. This past week we cooked las berenjenas con miel y queso, a Spanish dish similar to this recipe. It was my first time using a cheese slicer, and it blew my uncultured mind a little bit. The cheese was in such thin, bougie slices, and honestly, it just tasted better that way.

The second Spanish class is 21G.735 Cuban Travels, taught by a wonderful MIT professor with a strong Cuban accent. 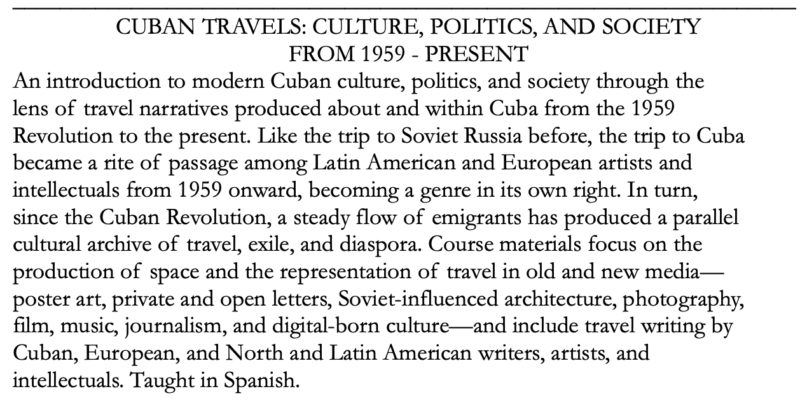 It explains travel through the personal narrative, two of my favorite reading genres, so it’s a blast. Sometimes, the readings are even in English, a welcome break for my brain. One of the metaphors from a reading, Travel and Writing by Butor, claims that life is a trip, and by settling, we have forgotten how to live. Put more eloquently,

If, in the wandering civilization, the end of an individual’s journey is equivalent to his death, the settling of an entire people–even if it permits the enjoyment of an economic affluence immeasurably greater that that to which it was accustomed…–is always lived (in a certain fashion) rather like a death, an overcome death, ostentatious; a sort of life beyond death. We each keep, more or less hidden within us, a nostalgia for wandering. To travel is to live once again.

It’s also a night class from 7-10pm. The last hour is either the hardest to get through after an already long day or the easiest to get through because I am asleep, which may or may not have happened on the first class.  03 In my defense, I was very jet-lagged because it was 3am in Madrid (where I spent my IAP), AND the lights were off because we were watching a movie.

Up until this point, most of my classes had been grammar and reading comprehension, mixed with some movies and short films. For the first time, these were analytical social science classes taught in a different language. Progress like this encourages my belief in my fluency, but then I hear two Chileans or Argentinians speak to each other at a conversational speed, and I lose hope all over again. 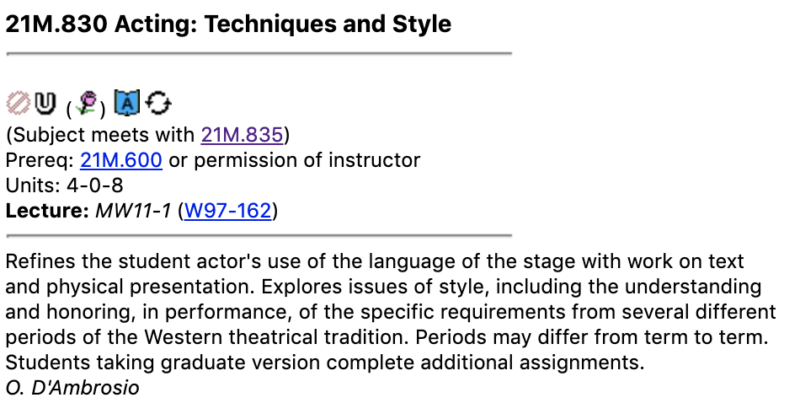 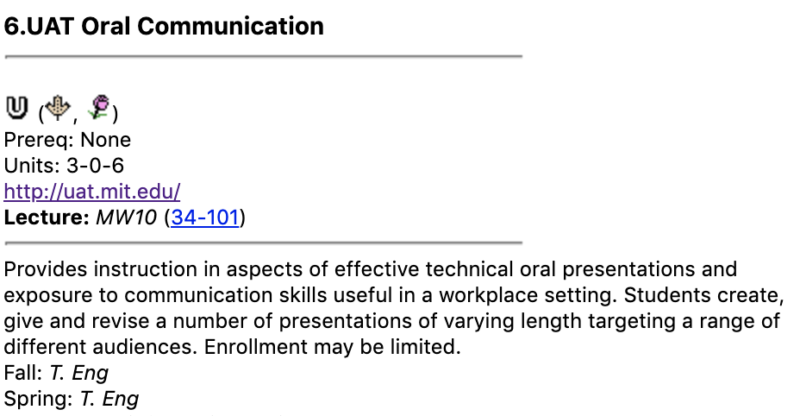 The acting professor, Olivia D’Ambrosio, is fascinating. She is the founder of the community theater company Bridge Repertory Theater, which is currently showing Who is Eartha Mae?, an incredible one-woman show about a famous actress / the singer of “Santa Baby” and many more hits. She throws out short adages or words of wisdom during breathing and acting exercises. For example, during an exercise where we simply follow our most vivid impulse and explore a space, she pronounces to our awkward, self-conscious selves, “Free yourself from the tyranny of your mind!” By the end of the session, people are slithering on the ground like a flatfish, toppling tables, and participating in a general anarchy.

Yes, it does end up being a stack of reading and writing, but I also have more time to do ballroom, to journal occasionally, to breathe, to take walks, to be curious again, and that has been lovely. TBD whether that will continue as mid-semester turbulence picks up.