The Art of Scheduling by Sabrina M. '21

For the past year and a half I lived in Cambridge, worked full-time, and did all sorts of adult things.⁠01 including but not limited to: having hour long phone calls with insurance companies, collecting money from 9 other roommates and mailing out the rent checks, making the switch from crazy college party to mild adult dinner party I’ll write about that experience more in depth in another blog, but the biggest change from being a full-time student to being a full-time employee is time. As a student, depending on what you’re involved in, you can have a lot of “free time”, free in the sense that you don’t have that many true obligations and Places You Need To Be At. Even when I was juggling classes, DormCon, and other dorm obligations, I had a fair amount of “free time”. Of course, many of those free hours could (and probably should) have been spent doing homework and studying, but in reality, I could have done anything during that time. Spontaneous Tuesday Afternoon Ramen in Harvard Square? Sure! Lying in the grass on Killian Court for an hour after a 1pm class? Great! Time was so much more nebulous, and I existed in a constant state of “how should I be spending my time?”. Working, on the other hand, is much more rigid, depending on where you are. For the most part, I had to be at work from 10AM-6PM, Monday through Friday. Spontaneity was essentially thrown out of the window. By the end of the work day, I’d feel pretty burnt out and want to do nothing but mindlessly tune out.

In years past, when I wasn’t working, I’d spend my summers lounging around the house, playing video games, watching television, and being completely bored out of my mind. By July, even the television I hungrily waited all year to watch would bore me, and I’d be counting down the days until September.⁠02 funnily enough, when I applied to become a blogger, and the prompt asked me about my typical Tuesday, I wrote about this nonsensical routine of nothingness As May hit, the summer was approaching, and the days remaining at my job counted down, I could see myself straddled firmly within the Line of Unproductivity. 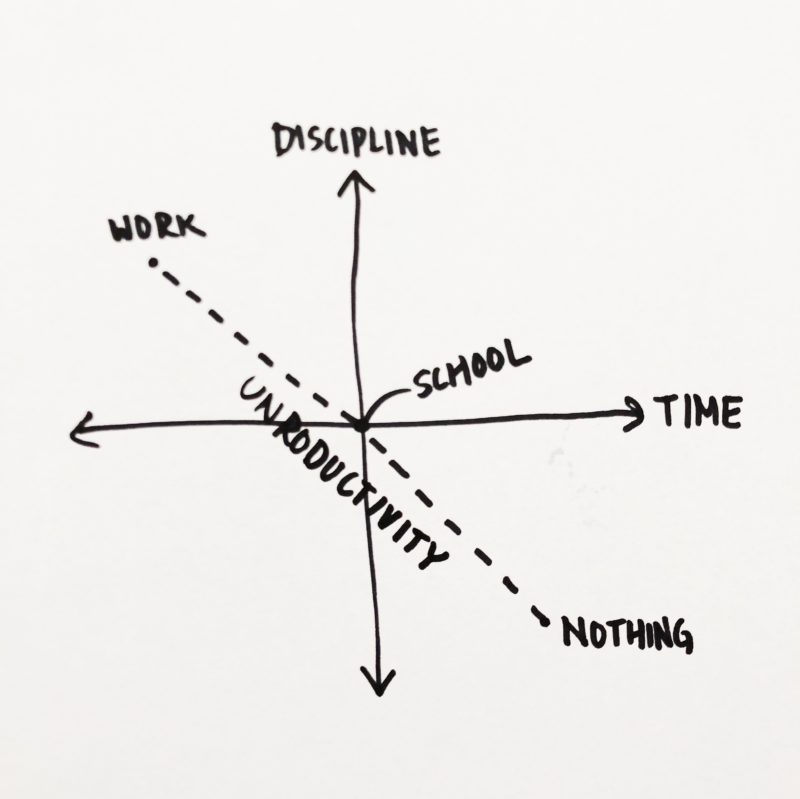 When I was working, I had the discipline to follow a rigid work schedule, but little time or motivation to do anything else. In school, I had an average amount of time, and enough discipline to get my work done, but not enough to spare. Without school or work, I had endless time and no discipline whatsoever. I desperately needed to break free. So, when I had a free summer for the first time since high school, I knew things had to be different this time around. I knew as soon as I returned to MIT, it’d be too easy to become swamped with classwork and forgo my other interests.

I set out to learn the art of scheduling, and the importance of having things to do even when you don’t technically have things to do. I’d written down a few loose goals for the summer – read more books, write more, exercise more, and other things like that. I drafted up a weekly schedule and tested it, adjusting it as I went, adding or removing things I felt would make it better. The first draft of that is here: 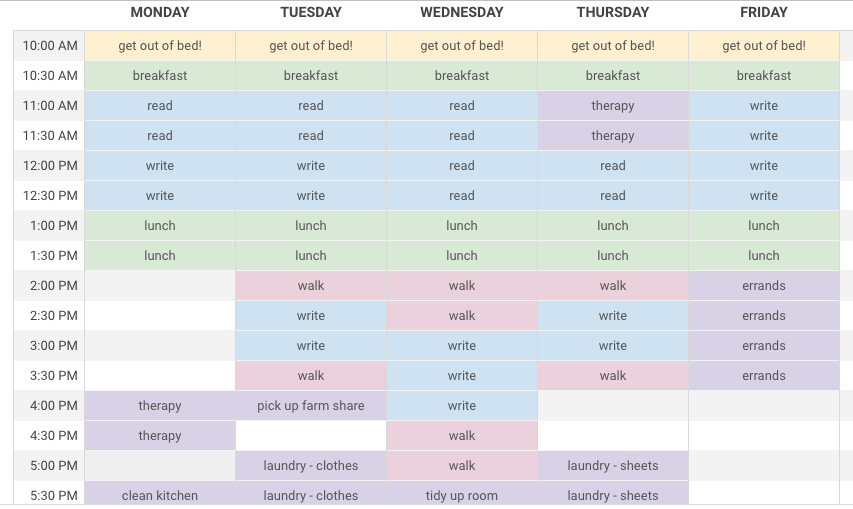 walking, of course, to various libraries in the area

As a creature of habit, I knew that simply doing things repetitively would set the groundwork for continuing to do it. A tip experienced artists always give is to just Do It, Do It even when you don’t want to, Do It even if you aren’t motivated, because simply Doing It will achieve two things; one, you’ll make more progress than if you didn’t, and two, Doing It will get easier and easier when you keep at it. The same applies to things like working out, eating healthier, doing chores, and other things that are really good for you but kind of hard to start doing.

At the beginning of the summer, I had hoped to follow this schedule to the T every day and hour, but that wasn’t realistic. Some days, I was traveling, or at the beach, or going on a spontaneous date, or even just recovering from an injury on my foot. I also had to adjust my goals to fit in with real world realities. Even though I didn’t follow it rigidly, it’s still achieved the goal for me, and taught me the value of something I didn’t even recognize: flexibility. I was kind to myself when I missed things, regardless of the reason. Here are a few of the things I’ve accomplished.

Scheduling helped form the foundation of new, healthier habits. Waking up at the same time every day, along with eating around the same time every day has done something magical to my mental wellbeing. Or maybe that was just all the sunshine. I actively want to read again, and do so almost every day, even when I’m not following my schedule. I keep my space tidy, since doing a little bit every week is a lot easier than doing it all at once every few months. In the routine, it becomes hard to forget about what needs to be done. Most importantly, I let myself breathe in between my responsibilities, because it’s a lot easier to stay afloat when there’s air in your lungs.