The Blogs Turn 10: Looking Back, Looking Ahead by Chris Peterson SM '13

data and narrative, past and present

Last week the blogs turned ten. We celebrated by asking a bunch of former bloggers to come back and blog for us. In case you missed it, here’s an index of their entries:

These are, in my opinion, some of the best blogs that have ever been written for MITAdmissions. If I could assign reading to prospective students like I can assign it to my students, I would have any serious applicant read all of these. I feel like I have learned so much – about MIT, about myself – by doing so. The whole idea behind the blogs is to open a window into the lives of MIT students: what they do, think, and feel. These blog posts do a spectacular job at telling the many different stories of MIT as experienced by some of its most thoughtful students. I couldn’t be prouder.

When Ben and Matt founded the blogs, it was not clear what would happen, or what they would be. Certainly it wasn’t clear that the blogs would keep going strong for more than a decade, that they would one day be featured on the front page the New York Times, or that dozens (hundreds?) of colleges would start their own blogs based on the MITAdmissions model. They’ve had a tremendous impact.

In advance of this anniversary, I decided to write some code that would help me grok the scope and impact of the blogs quantitatively and computationally. Put simply: I scraped a lot of data from the blogs so that I could begin to wrap my arms around what we’ve done. You can download it here. It’s not perfectly accurate – and you should keep that in mind while reading the following findings – but it is fascinating!

In ten years, our bloggers published 4640 posts, totaling approximately 3.2 million words. If the blogs were printed out and bound together as a book (which we won’t do, because: trees), it would be longer than all of these legendarily long books, combined:

Since August 2009, these 4640 posts have been viewed approximately 7.2 million unique times, but these pageviews are not evenly distributed. The five most viewed blog posts over the last five years are:

Ben’s post is almost certainly the most read in our history once you factor in the late start date of the blogs. I am not surprised by Anna or Mollie’s posts being this high up, as they are famous and often referenced by applicants. I *am* surprised by Snively’s and Anthony’s, and so are they; we don’t know what to attribute this to other than weird Google stuff.

Of course, these are outliers: of the 4640 blog posts, only a dozen or so have exceeded 50,000 unique pageviews since August 2009. These posts dominate any a simple time-series of blog traffic: 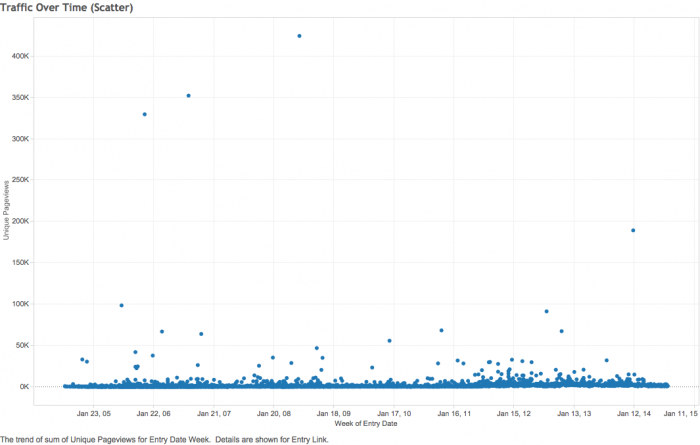 If you exclude these outliers, then there appears to be a very slight upward trend in unique blog pageviews, albeit somewhat confounded by the fact that a) anything before Aug 2009 was visited long after it was posted and b) when we redesigned the site in 2011 we changed the URL path. And by “somewhat confounded” I mean “completely confounded and we honestly probably can’t say anything of any real consistent meaning with the data we have but I will anyway because that’s what blogs are for”: 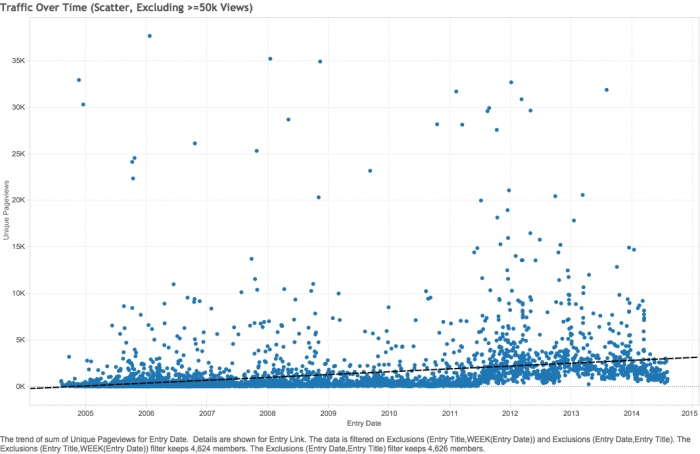 Over the last decade, more than 19,000 different users have left more than 108,000 comments. Our most commented entries are consistently the open threads we post during Early Action and Regular Action decision time, and these can receive hundreds of comments. The 95 percentile, however, is 71 comments, and if you exclude the top 5%, then both the chart and the trendline suggest decreasing comment activity over time: 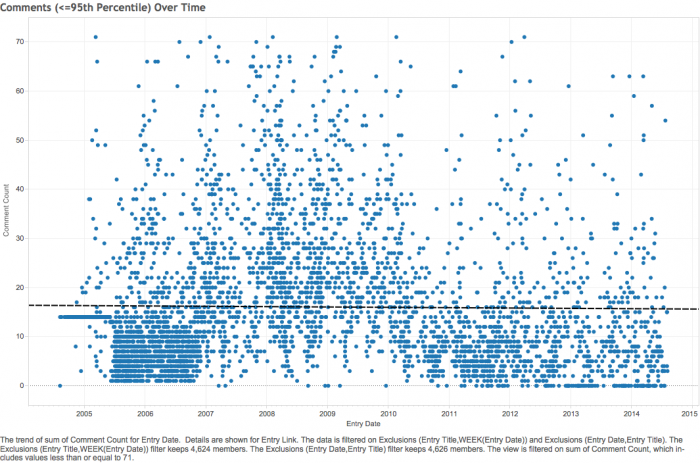 In 2012, we switched our comment system to Disqus. The hope was to facilitate contemporary comment practices (threaded conversations, @replies, and so on) while retaining our characteristic freedom to comment (including anonymously if desired). The upshot is that, since we switched, the average number of comments left on any given blog entry has dropped from 25 per entry under the legacy system to 19  per entry under Disqus.

It’s really, really hard to separate correlation from causation here: did comment activity drop over the last two years (partially) because of Disqus, or did our introduction of Disqus coincide with other factors? Someone better at stats than I might be able to build a model with the data I’ve gathered, but I am not that person.

Part of the decrease in comment activity, I suspect, is because at least some of the commentary is moving to Facebook and other spaces where links are shared and discussed. The blogs have received more than 51,000 ‘engagements’ (== sum of total shares + total comments upon shared links) on Facebook since it started keeping records. The blogs with the most Facebook engagement are: 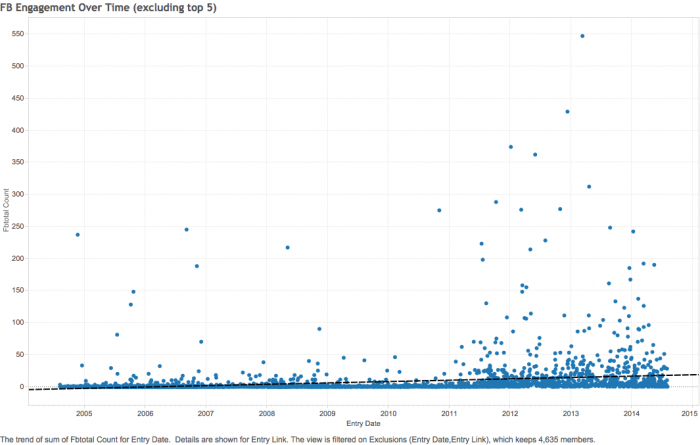 So what have we been talking about with all of these words, that all of these readers have been viewing and commenting upon and sharing? Lots of stuff! Too much, in fact, to do anything more than a distant reading of the blogs (at least, for this particular post), powered by the CLIFF entity extraction and geoparsing engine.

According to CLIFF, the blogs have talked about ~4500 distinct organizations and ~8200 distinct people. The five most discussed organizational entities were:

(keep in mind that these are specific formulations of an entity: i.e., it does not recognize that IAP and Independent Activities Period are the same thing)

As for people, well, we’re a navel-gazing bunch: of the 10 most talked about people on the blogs, 9 of them are bloggers, and one of them is a blogger’s husband (the only thing Mollie loves talking about more than MIT is Adam, apparently!).

Of somewhat more interest (to me, anyway) are the geoparsing results, which allow us to plot which bloggers (and blog entries) mentioned which places in the world in their entries: 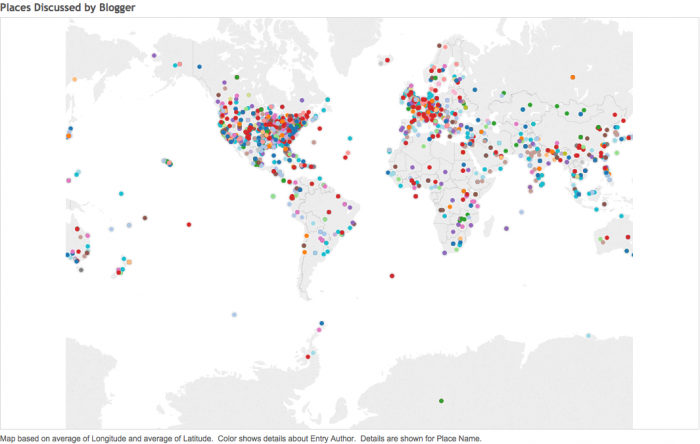 As you can see, we’re a cosmopolitan bunch! If you simplify this map to color in countries that we’ve blogged about, you can see we’ve mentioned almost all of them! 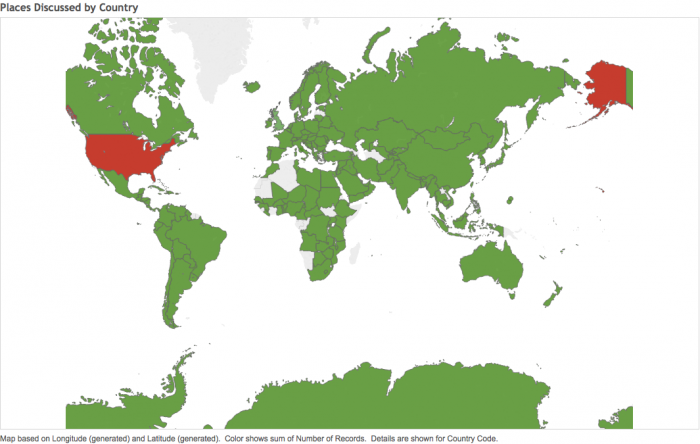 The straightforward, initial answer is “nowhere.” We love the blogs, and so do our applicants; we have tremendous support for the blogs within and without MIT, and we could easily keep on as we’ve been keeping on for the last ten years into the indefinite future.

But I would be lying if I weren’t concerned about the next ten years of the blogs – or, more specifically, how we help current MIT students tell their stories to prospective MIT students. The problem, as I see it, isn’t whether we can continue running the blogs (we can) or continue finding bloggers (we will). The problem is whether or not the audience will continue to be there, and whether that audience will just be the people who already know and love MIT, or whether we can continue to help reach out and introduce well-matched students to MIT.

As Ben noted, the web has changed so, so, so much since the blogs were founded. Anyone reading this post I suspect is familiar with the fundamental dynamics I’m describing so I won’t belabor them here. Suffice to say that, in 2004, there were barely any social network sites as we know them today, and so a college admissions site with a) student-written blogs and b) open comments was a kind of godsend for those who might want to get a sense of what life was like at that particular campus. In 2014, those conversations and connections are overwhelmingly occuring through a few social media channels (Facebook, Twitter, tumblr, etc); instead of being centralized around and faciliated by a given institution, they are facilited by those channels and decentralized to friends and peers. And, frankly, our bloggers post a lot more to Facebook and Twitter and Instagram and so on than they do to the blogs, because that’s where their friends are.

College admissions officers are often described using the metaphor of ‘gatekeepers.’ For almost ten years, we ran a little social club out in front of our gate, where people could gather and talk and hear stories and learn about what was behind the gate. Every year a few of them would try to pass through the gate; only some of them would make it, but even if they didn’t, they could still (and often did) keep chatting with the folks hanging out in front of the gate. Now, we’re still keeping the gate, and still hosting a little club in front of it, but the conversations are mostly happening elsewhere. Now, when people come to the gate, it is often headlong as an applicant, and perhaps without even the knowledge that there is the opportunity to learn about MIT ahead of time.

I’ll be dead honest: I don’t know what to do. I have some ideas. We’ve talked about redesigning the homepage so that, in addition to the blogs, you also get a ‘firehose’ of blogger Instagram pictures, tweets, and tumblr posts. We’ve even talked about transitioning the blogs entirely over to tumblr (or whatever) and just using the homepage to link out to completely decentralized blogger tumblrs. We’re not going to do either of these in the immediate term (or maybe ever). But I have come to the conclusion that, for a variety of (mostly exogenous) reasons, the blogs need to adapt to the changing digital ecosystem in which they are embedded.

What form that adaptation should or could or needs to take, I’m not sure. And I want to emphasize that our strategy/values (open, student-led communication to and with prospective students) remain the same they’ve always been. The question is how we tactically implement that strategy to make sure that a someone of the Class of 2019 finds whatever is at MITAdmissions.org as useful and meaningful and relevant as someone from the Class of 2009 did. And if you have suggestions about how to do that then please let me know.

Mostly, though, I’m just incredibly happy to have had the opportunity to help lead the blogs through almost half their life, to work with the students and staff who make it possible, to speak with the applicants for whom it was built, and generally to be a part of this ongoing whatever-it-is. Even though (because?) the next five, or ten, or twenty are uncertain, I can’t wait to see what they bring.