(webcast embedded from commencement website. I’ll return to this blog post throughout the day to add pictures and videos).

Today, Friday, June 7th, the Class of 2019 graduates from MIT. They were admitted, auspiciously, on Super Pi Day (3/14/15 at 9:26AM) to begin their MIT education; now, a few years later, we have taught them what they can, and they belong to the world.

The commencement address will be given today by Michael Bloomberg, with other remarks by class leaders and President Reif. You can watch these remarks, and the distribution of the diplomas (yes, we hand all the real ones out, and read all the names of everyone graduating), in the embedded webcast above.

On Wednesday night, I had the honor of giving the Senior Class Toast, an annual celebration of the graduating class. After some introductory remarks (and light roasting) about their origins as a class, here is what I told them:

Then, that August, you arrived; suddenly, four years later, you are here, about to depart. For me, and for you too, that time has both seemed too long and too short. If you’re like me, when I was about to graduate from grad school at MIT, you may currently be full of several different, and seemingly incompatible, emotions, a few of which I want to name and honor:

– A sense of accomplishment at having completed one of the most difficult and rewarding challenges of your life so far, and a sense of numb, “is that it?” malaise that its completion has not, of itself, brought you happiness or meaning or fulfillment

If you are feeling any or all of these emotions — or others that I have not yet named — then I want you to know that it is okay, and that it is normal. It is also okay, and it is normal, to feel a sense of destabilization, of an inevitable shift in your identity, of a sense of who, what, and why you are. Personally, it took me a full year after commencement before I started feeling ‘like myself’ again, meaning before I had decompressed and processed my grad school experience enough that I could really synthesize who I had been and what the Institute had made me into a unified person I could recognize in the mirror. If that is true for some of you now, or later in life, just know that it is a process, and it takes time.

Like MIT, this process of building your new identity is something you will have to endure. And it turns out the etymology of the word ‘endure’ traces to a 1382 English translation of Acts 19:9: “Summe weren endurid, or maad hard.” But the original word has two distinct meanings: to be made callous and indifferent, or to become sturdy, durable,, capable. One of the most important lessons of doing anything difficult, or having anything difficult done to you, is trying, as hard as you can, to tend toward the latter. It turns out that this is a lesson you will have to live and learn for the rest of your life.

Here is a small piece of advice I want to give you on how to do that: I don’t sleep with my brass rat on. One reason is so that, when i get up every morning, and get ready to go out into the world, the small daily ritual of slipping it on reminds me to be my best person: the most intelligent, rigorous, enduring, yes, but also the most humane, the most empathetic, the person most worthy of the privileges and obligations that a place like MIT confers and also a place like the world needs. Because, in case you haven’t noticed, the rest of the world is in desperate need of people who are all of those things: intelligent and kind, hardworking and humane, capable and compassionate, and so on.

Four years ago, you were given a spot in the Class of 2019 because we saw something in you: a resourcefulness, an initiative, a potential, a dedication; something that could improve MIT, and the world after. And, as anthropology teaches us, gifts are given in order to create a sense of obligation that brings both the giver and recipient closer together. Your obligations — to always be conscious of your power and privilege, to remember that there but for the grace of god (and an admissions committee that believed in you) go you, to a world that we must collectively rebuild if we are going to have a common future — are in this sense not a result of attending MIT, but the reason for it.

I graduated from college 10 years ago, into the Great Recession, which in retrospect is when in my life it first seemed like everything solid was dissolving into air. Now, you are graduating into a world where our entire shared political, economic, and ecological future is uncertain and very much at stake. I want you to know that I have never been more discouraged by the world as I find it, but also and simultaneously never more hopeful about the prospects of a better one, and that the biggest reason for that is everyone younger and smarter than me, and that includes everyone in this room, who have the unique abilities, aptitudes, and moral clarity to actually create it. There is immense power and potential in this room, more than even we realized on Super Pi Day in 2015; it turns out that the illuminati is real after all, and that’s because it is all of you.

So please, raise a toast with me to the Class of 2019, in honor of what you have done to get you here, and in the hope of realizing the better world that you can build together if you remain as dedicated, creative, and considerate as you have had to become to get into, and out of this place. To see the alternative futures that are still possible and work towards the right one as you worked at MIT: together.

To you, to the past that got you here, and to this vision of your future — cheers. 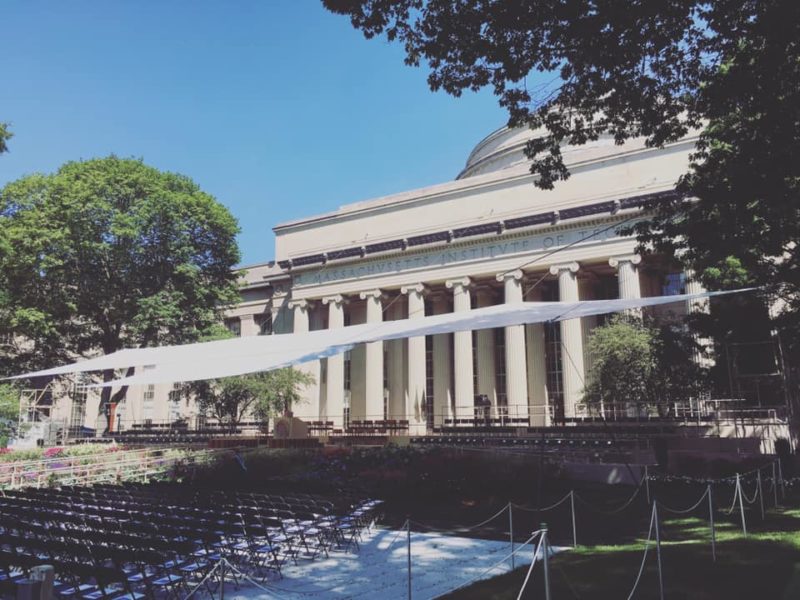 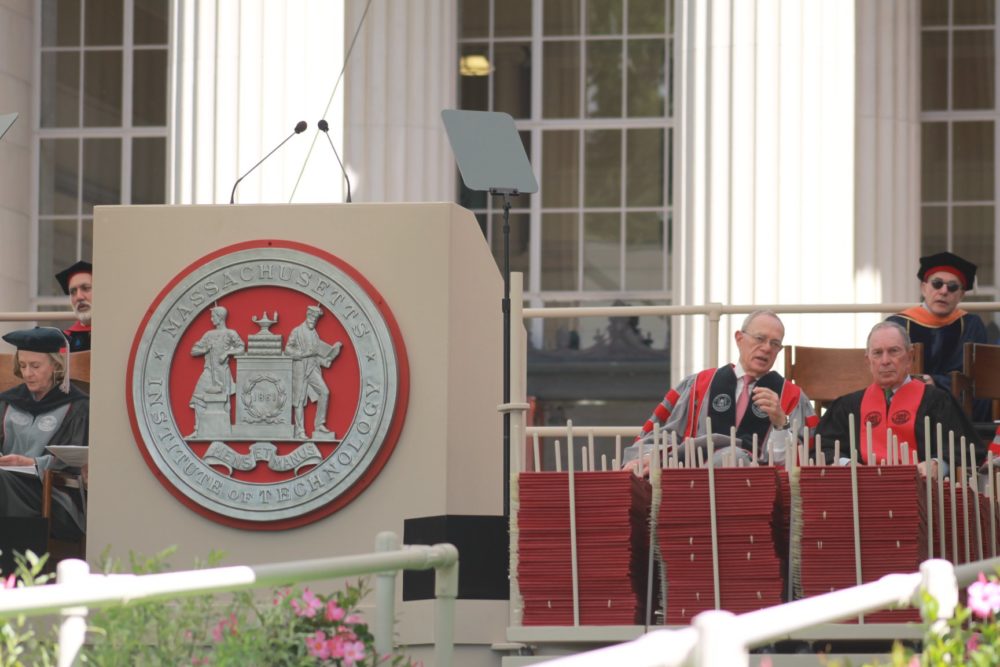 President Reif and Michael Bloomberg, foregrounded by podium and degrees,  talk before the ceremony begins. 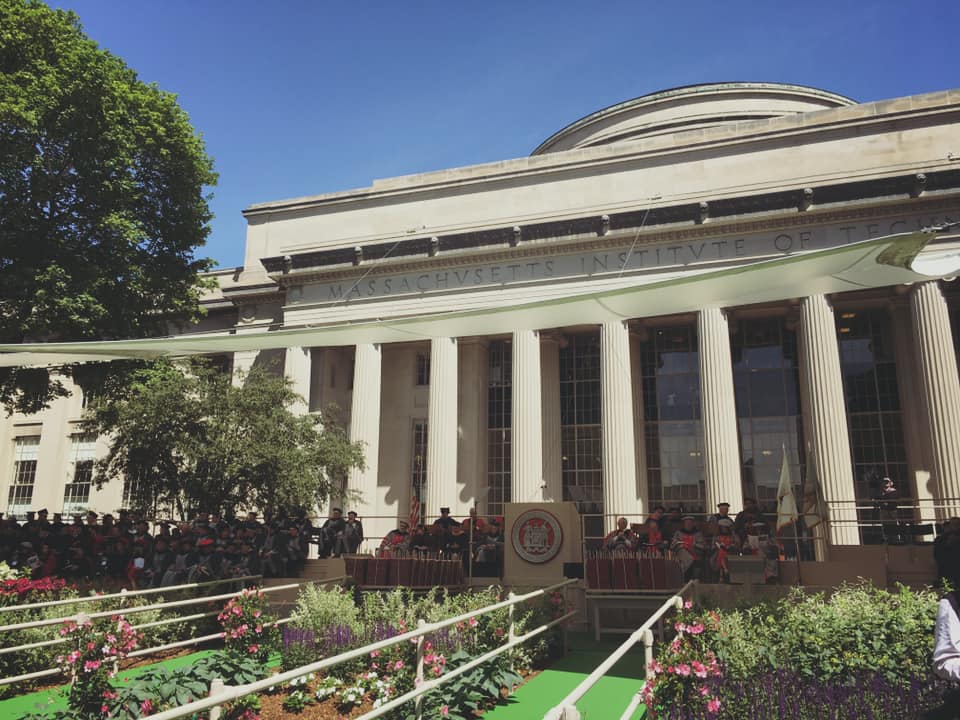 Faculty and the Corporation atop the dais. 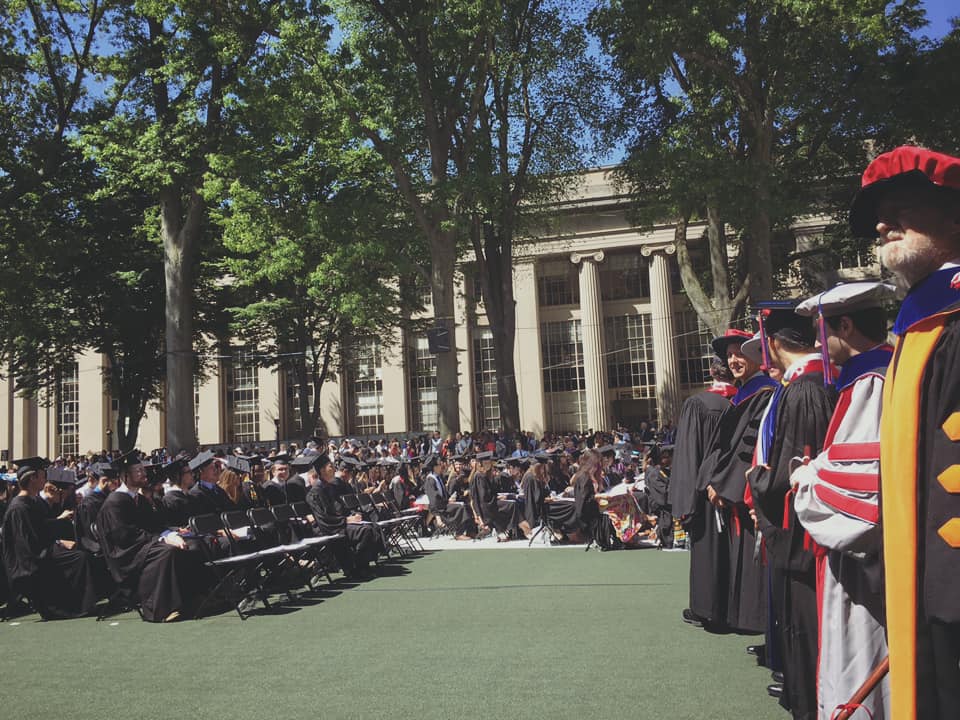 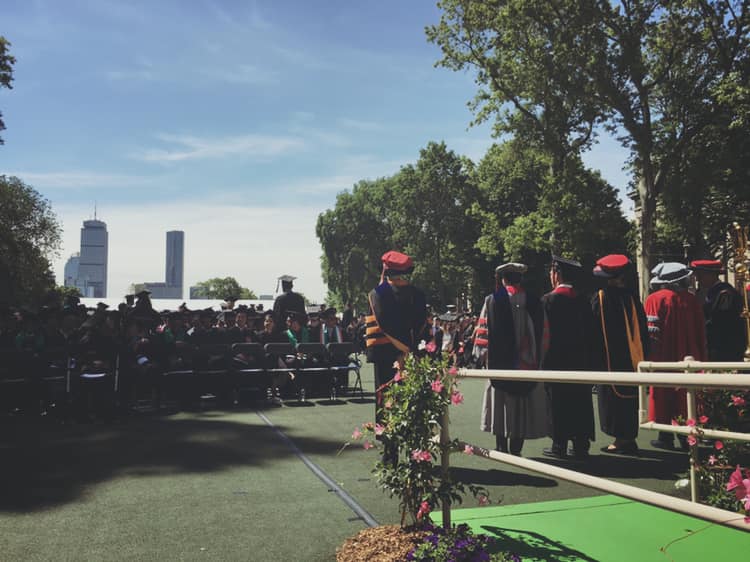 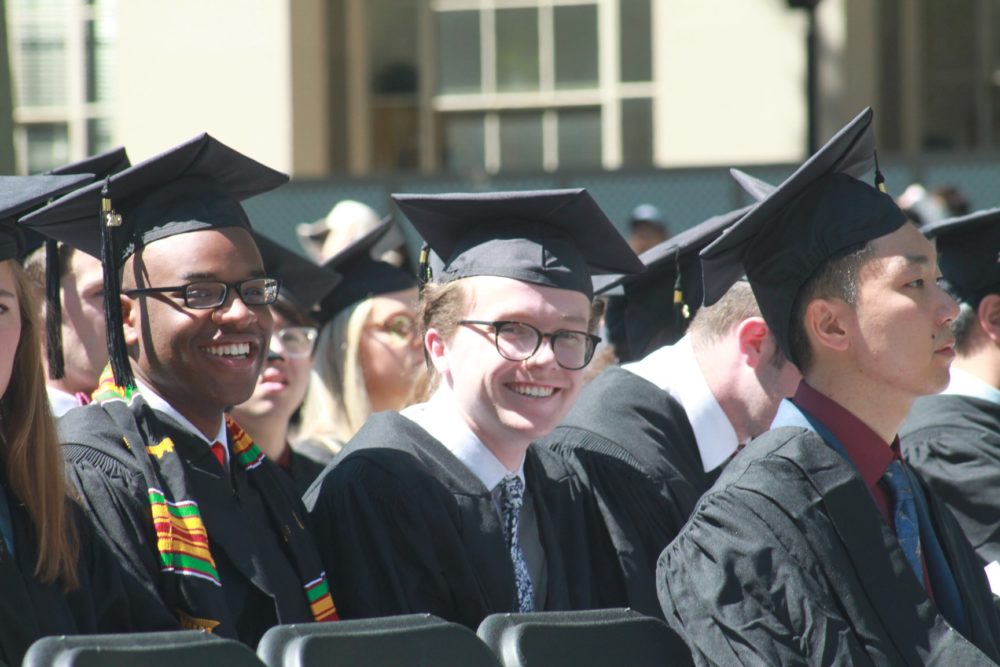 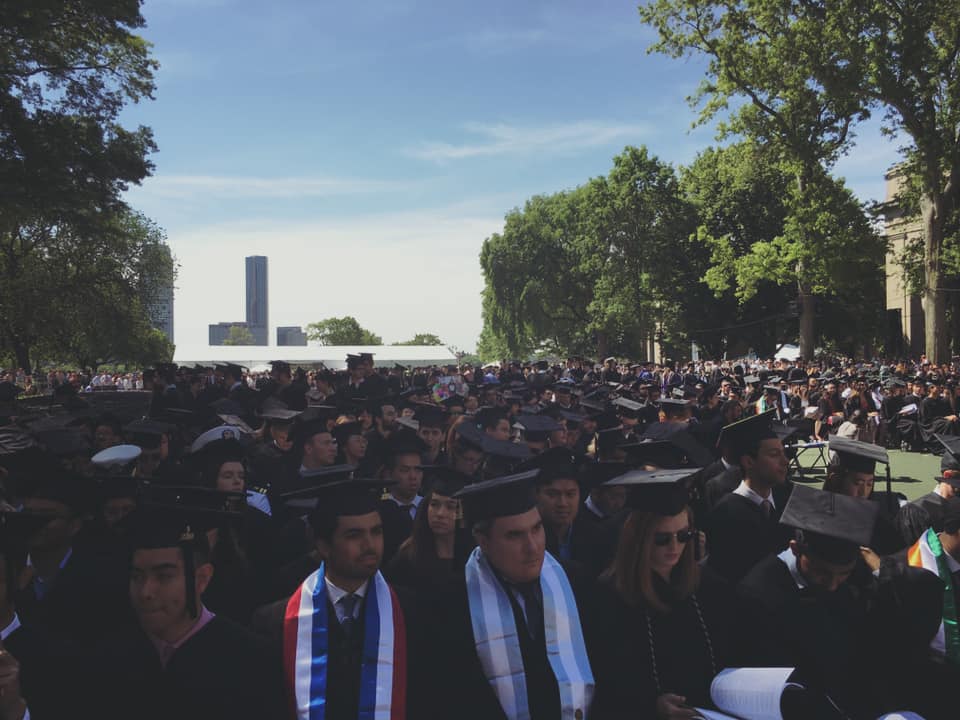 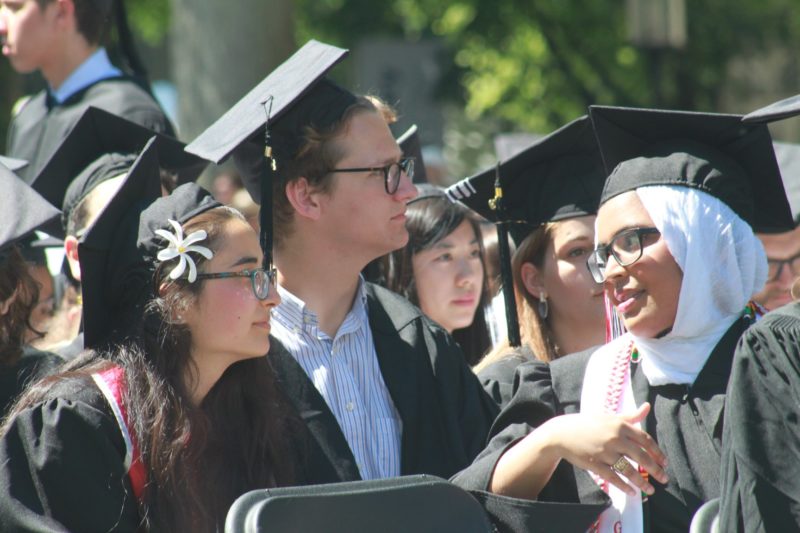 Students waiting for ceremony to begin. 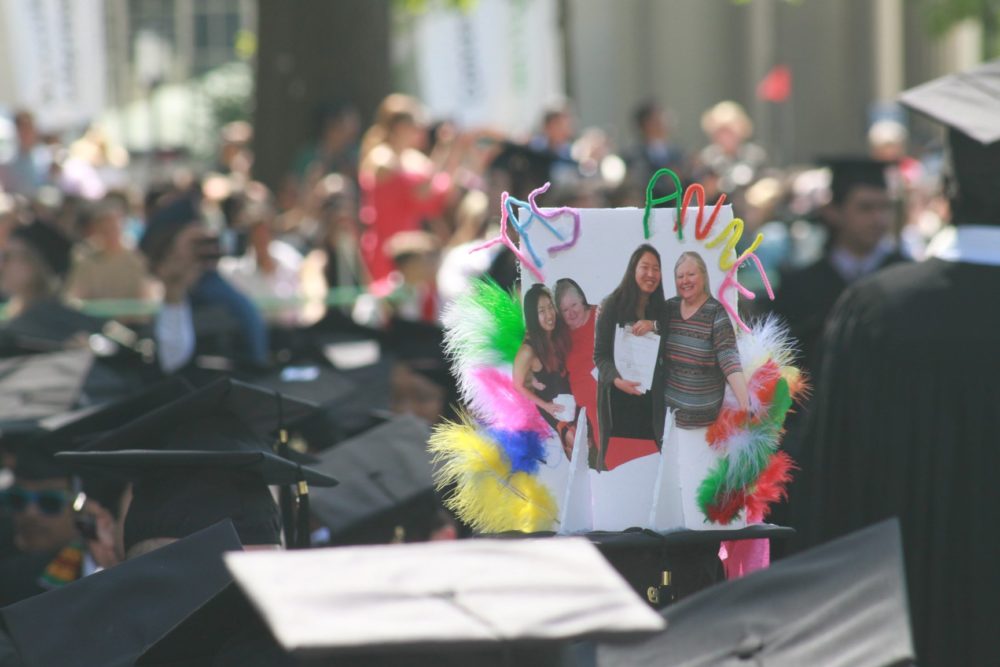 Mortarboard paying tribute to Anne Hunter, the legendary course administrator for EECS and advocate for undergraduates. 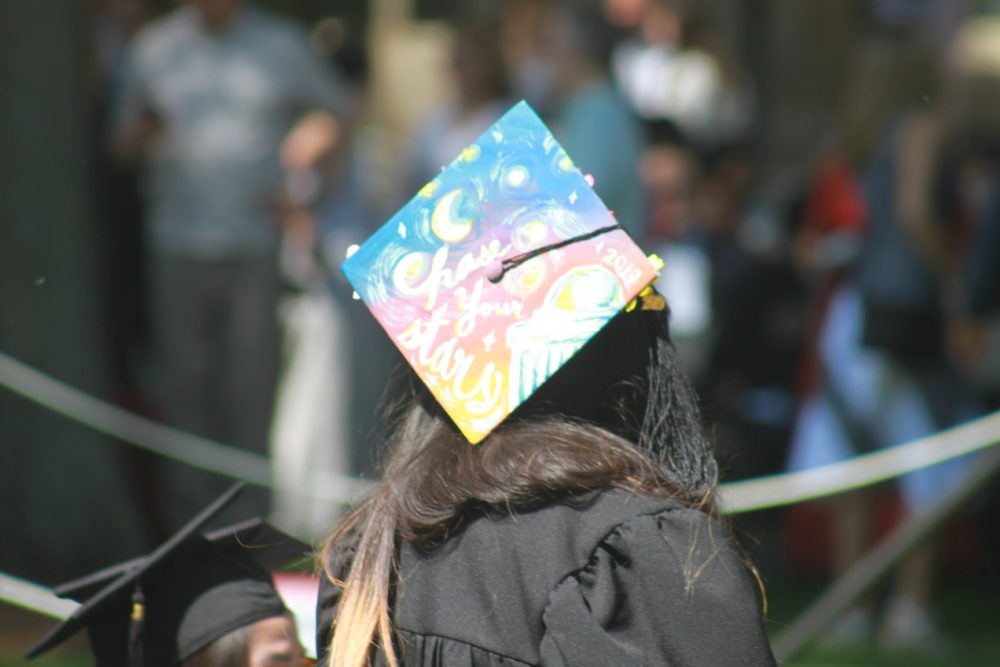 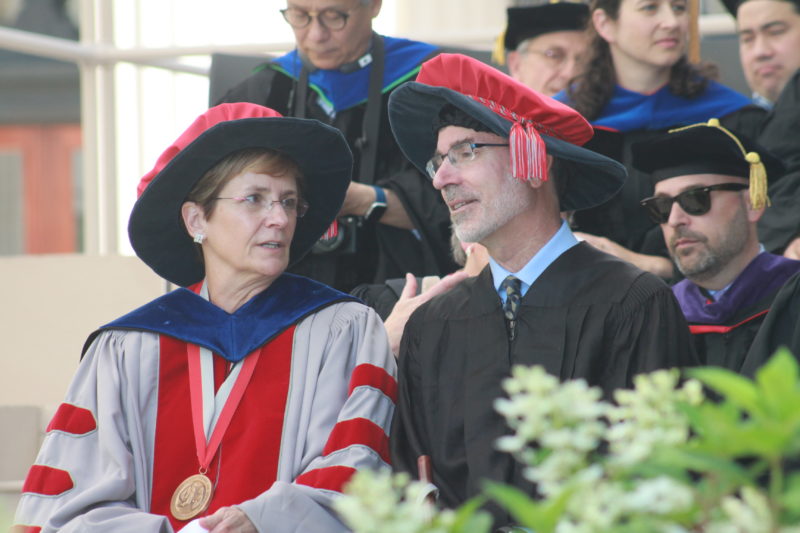 Dean Stu Schmill (right) among the dignitaries on the dais. 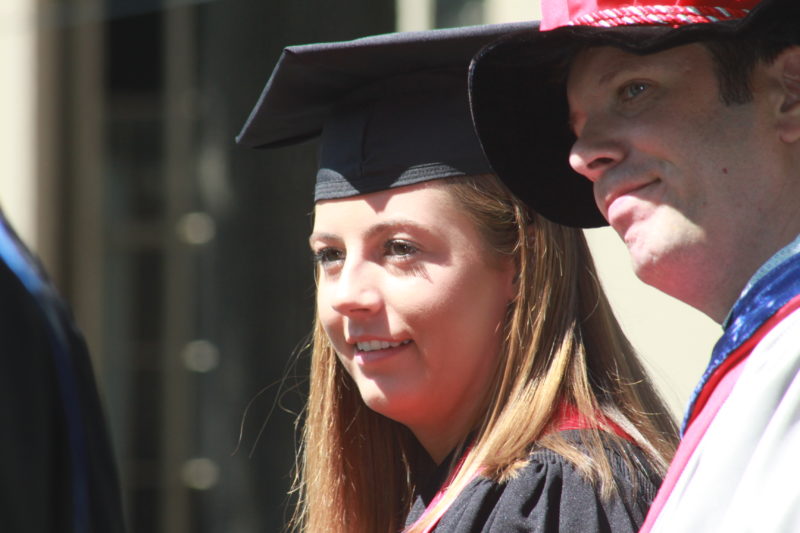