The Late-Night Juggler by Danny B.D. '15

Note: The following is adapted from an article I wrote for CMS.350, or 21st-Century Journalism. Walking around MIT means running into awesome people like Smyly, and I figured you might want to hear about him too :-)

It’s three in the morning and MIT’s campus is, for once, pretty much quiet. Walking up the main steps into Lobby 7, the tweetweet-druhdruhdrum sound of the crossing signal on Mass Ave is still audible as you pass through the front doors. Inside, the air is still and silent, with only the faint hum of those Zamboni things which are busy scrubbing the hallways to a dull, dirt-free sheen. In front of you is the Infinite Corridor: by day, it’s the main artery for foot traffic among academic buildings, but at this hour a fly’s footfall would be distinctly heard. As you walk down the Infinite, you begin to hear a distinct patter coming from somewhere along the hallway’s length. Halfway along, the Infinite opens up into Lobby 10, the grand chamber which originally served as MIT’s front entrance. The patter you heard has grown louder, and is noticeable as a rapid clack-clack-clack-clack coming from in front of the elevators. Curious, you peer into the antechamber abutting the lobby.

Standing there is a man with a ponytail and goatee. He wears black pants and a blue button-down, with an e-cigarrette among his personals nearby. His head is bowed in concentration at the floor in front of him, where his hands are directing seven red balls to patter against the floor in a quick-paced rhythm. He is juggling. 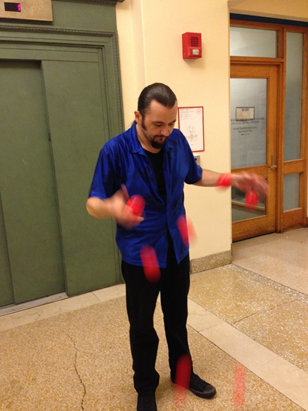 The first thing you realize when you go talk to Nicholas Ferri is that he really likes juggling. Nearly every sentence out of his mouth ends with a tidbit about why juggling is important for the body, mind and soul. His dedication goes far enough that he prefers to go by his stage name, Smyly the Juggler. And you wouldn’t know it looking at him, but he has been practicing late-night juggling, every week, at MIT for the last twenty-four years, since 1990.

At twelve years old, Smyly worked near Quincy Market in downtown Boston as a shoe-shine boy. Shoe shining wasn’t a particularly time-consuming profession, so a young Smyly began to learn tricks and skills from the other local vendors, including the art of juggling. In short order, he then found the MIT Juggling Club—which met regularly at the Institute—and he’s been practicing his craft in Lobby 10 ever since.

Over the years, Smyly’s nocturnal presence has made him a regular in the Infinite, as well as a friend to the janitorial staff and the campus police alike. He has come to serve as the de facto guardian of Lobby 10, which itself acts as a memorial to those in the MIT community lost during World War I. If people try to disrespect the environment, Smyly handles them: “Doing something—bouncing something off the wall? You don’t do that, it’s a memorial. Writing something on the wall? You don’t do that.”

What’s particularly amazing about Smyly’s status in the Infinite is how he holds no connection to MIT itself. He has never been a student; he’s never been a TA for a class; he’s not in the MIT directory. He comes back each week to meetings of the MIT Juggling Club, which does not possess any current student members. The Juggling Club was founded back in the 70s by then-MIT-student Arthur Lewbell, and the club has remained within MIT’s halls ever since. (If you’re interested in juggling at MIT, you can also join the similarly-named-but-distinct group, the MIT Student Juggling Club.) Smyly himself is only affiliated through this non-student club: how, then, can he be allowed on campus so late at night? 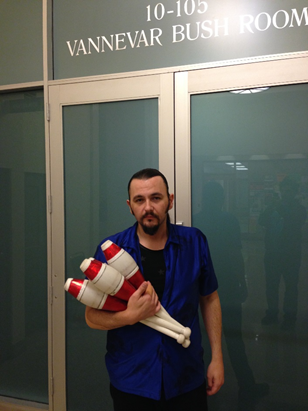 The answer lies in MIT’s open campus policy, which allows the public to roam the Institute’s hallways without escort or a limit to visiting hours. This allows for streams of short-term guests that MIT sees on a daily basis, but also grants someone like Smyly the ability to spend his nights practicing his craft within the Infinite. The merits of the open campus policy have been debated time and again over the decades in light of a larger conversation concerning campus security, but if anything Smyly is a living example of why it’s amazing that MIT keeps its doors open around the clock.

Almost a quarter of a century after first juggling in the Infinite, Smyly stays through the early morning and protects his corner of a college which has come to adopt him, despite no direct link. “I was here juggling last night until probably 4:30, didn’t get to bed until six in the morning,” said Smyly, “I go home, I watch The Cleveland Show, I go to bed, you know?” He chuckled. “Cleveland Show — that’s my show.” Before saying good night, however, he made a point to bring the conversation back to his favorite topic. I was then invited to an upcoming juggling event.

If you’re interested, there’s some video of Smyly online: