“STUDY. SLEEP. PARTY….pick two”: this was the advice I received from an MIT alum a while back. Throughout my time at CPW, I came to understand the meaning and context of those words.

My name is Li, and I am an enthusiastic member of the incoming class. I attend Cambridge Rindge and Latin School (more commonly known as “CRLS” or simply “Rindge”), the only public high school in Cambridge, MA. I must admit that it was often awkward answering the question: “Where are you from?”, and approximately ¼ of the time it was followed up by: “You mean, Cambridge, like…here? Or are you from England?” My trek to MIT was very humble, yet, as my Dad drove down Mass. Ave, the journey felt decidedly different.

(Oh yeah, this is my first time blogging, so let me know if I’m just rambling on aimlessly! No one at my school blogs, and it would have been rather silly to create a blog that no one would read. Nonetheless, I thought I’d try it since I’ve enjoyed reading the blogs on MyMIT. I can’t possibly describe every fact and anecdote, but I hope that I can bring some of my most exciting moments to life.)

I started my CPW experience by tagging along with my host—a fellow artist/dancer and a Course 20 sophomore—to her first class, 6.00. Course 6 isn’t really my cup of tea, but it was surreal to find myself sitting aside current MIT students (even one who was sleeping with his mouth wide open!) After this lecture, I went out on campus alone. After attending both 3.042 (a materials science course) and the general tour, I met up with my host and a couple other prefrosh for lunch on the steps of the Student Center. The sun was shining and the campus became more and more animated as the day continued. All of a sudden, a familiar figure walked out of the building, and we took a picture together:

After lunch and an informational meeting on housing and dining, I (along with Tina’12 and Marissa’12) was approached and interviewed by folks from TechTV! (Kind of embarrassing now that I watch it…) We then walked down Mass Ave, following the chalk arrows down to Random Hall to taste liquid nitrogen ice cream. Tons of prefrosh were packed into the room, waiting in suspense at 4:17 PM as Random Hall residents organized their flavoring and got liquid nitrogen from the adjacent room:

By the time everything was ready, I managed to get past the crowds to take a front row seat:

…and here’s the awkward part: I met up with someone I knew from Facebook! As we walked back towards MIT for the EAsT CamPUS tours, we met yet another Facebook prefrosh. Despite the oddness of these encounters, we got along really well and ended up spending the majority of CPW together.

Given the beautiful, balmy weather (quite extraordinary for Cambridge, since it had been cloudy and drizzly for a while) a few prefrosh and I decided to go to the Baker Rooftop Party. We were surrounded by a breathtaking cityscape: 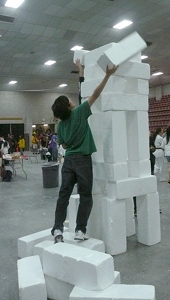 We also took this silly group shot together before we called it a night:

The next day, I attended a wide range of activities: Applied Math Lab Tours, Tie Dye at McCormick, the MIT Energy Showcase, The Advanced Music Performance, Meet the Bloggers…etc. I even managed to catch the EC/Senior House Water War in action: 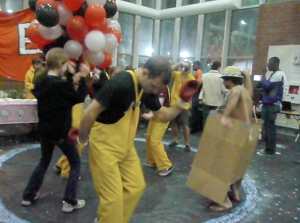 One of the most exciting of Friday’s events was the Bouncy Ball Drop, where I was fascinated to see not just people at (and climbing out of?) their windows, but a cat, too:

I stood back far enough to record a video. You can’t really see the balls falling, but this video decently captures and strobe light and the tail end of “White Rabbit” by Jefferson Airplane (how psychedelic):

For me, Saturday was mostly a dorm tour day. I visited MacGregor, Simmons, New House (où j’ai parlé avec quelques étudiants à La Maison Française), and Next House. After having a very nebulous idea of what dorm I was looking for/preferred, Simmons became my instant favorite. Another prefrosh and I went down to see the famous ball pit/meditation room, and I thought I’d just embrace the craziness by practicing yoga: 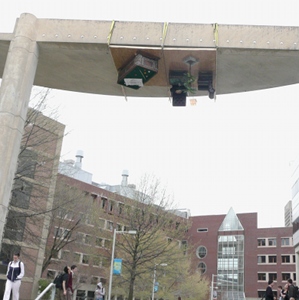 And of course, Simmons was filled with photographic possibilities:

(But of course, I have more concrete reasons to prefer it, too!)

After the Activities Fair and CPW Closing Remarks/Variety show, a couple of prefrosh and I ran through the drizzle-turned-downpour all the way down Dorm Row to Next House, where a past classmate of mine (a current sophomore) performed in “Once Upon A Mattress.” Coincidentally, it was also “hack night” for “Next Act.”

During my time at CPW, I managed to visit every dorm (minus Bexley…), and participated in more events than I can keep track of. It was truly the most fun I had had in a long time (especially since “senioritis” is really starting to kick in.) My only regrets are:

1) I didn’t get to any events across the river
2) I didn’t spend much time with my host, who was AWESOME

I know this sounds cliché to the extreme, but I truly felt that I could be myself at CPW. When I applied last fall, I made that decision based upon MIT’s curriculum and location, but I never realized how cohesive the community was on an emotional/social level. The students I met struck me as independent, innovative people with brilliant senses of humor. Being on campus revived within me a sense of wonder that I hadn’t come across since childhood—a feeling in between that of visiting the Museum of Science for the first time, and going trick-or-treating past my bedtime. I am still awed by the creative energy that flew through the campus, and am honored that I will soon become part of it.