There is no solving for x by Powers '23

thoughts on moving to and away from Maine

Context: I wrote a post in March called “I Moved to Maine” . You can read it if you want, but tl;dr: when COVID hit I went to live in Maine with a group of friends and acquaintance from MIT instead of moving back in with my parents. About a month ago I decided to go back home for the summer, which was a large deviation from my initial plans. This post is my reflection on that choice.

When I was younger –I’m talking middle school and high school– I liked to think of things in term of absolutes: Everything happens for a reason, (insert name here) is a bad person, I will always feel like this, you get the idea. One of my favorites of the blanket statements was “I feel (y) because of (x)”, where ‘x’ was an event or an aspect of my reality and ‘y’ was how I was feeling. ‘x’ got turned into ‘y’ by ~my brain~.

“Events” could also be called factors, reasons, situation, etc. Basically anything concrete that was happening in my world.

It felt nice to have concrete answers to the phenomena of my life. It got to the point where I almost saw myself as having a “cannon”. Like I was a comic book superhero, I’d boiled down the significant events of my childhood into a relatively short and sequential summary of a character’s formation. The basic version went something like this:

I was born in Milwaukee, WI, to my two parents, who are both entrepreneurs. I’ve wanted to be both an engineer and a writer since the first grade, when I started keeping journals and my cousin showed me a video of a driverless car he was working on . I was shy until I wasn’t, which happened around 7th grade when I started eating lunch in the library with all the kids who read really long fantasy novels and took advanced math class. Middle school was hard for me, so I decided to transfer to an all-girls Catholic high school after eighth grade because I was very religious at the time. I was the only girl from my middle school, so making friends took a long time. In February of my freshmen year of high school I realized I had romantic feelings for a female friend, which forced me to come out to myself. It ate me alive for about two years. I did theater, which saved me in a lot of ways. I did robotics, which was fun until it wasn’t. Eventually I decided I needed to temporarily abandon my religion so I could learn to love myself. I did, it worked, I came out to my entire grade in an impromptu speech to the student body. Once I could be myself publicly, I was happy for the first time in my entire life. I got into MIT, booked a one-way ticket to Boston in August, cut off most of my connections from home, moved to East Campus, and became an entirely new person. One that was happy. I promised myself I wouldn’t look back ever again.

It’s so simple, right? It has this beautifully continuous arc of longing, realization, struggle, and triumph. Both the writer and the big-boi-galaxy-brain idiot in me reeeeaaaaaalllyyy like this because the story is so neat; it follows such a clear “because x then y” format. But it’s also filled with oversimplifications to make it fit that format. “Okay,” you might ask “but what does this have to do with you leaving Maine and moving home?” Well, on about the tenth attempt at writing this post, I’ve realized it has everything to do with it.

This year, I’ve experienced all kinds of complicated events and emotions, ones that really defy a clear cause-and-effect classification. I slaved over journal entries, songs, poetry, and conversations to try and weave a single, logical narrative arc out of situations that were more nuanced, complicated, and subjective that I’d ever experienced. It was pretty much impossible to separate heroes from villains, good from bad, or even events from non-events.

I would get so lost in the struggle to make this equation work that I would lose sight of one of the most valuable lessons I’ve learned during my freshman year, something that a lot of people much older and wiser told me: your feelings are perfect, and they don’t need to “make sense” to be taken seriously by you or anyone else.

Maine is actually one of my best examples of a situation like this. I’ve spent a month and a half trying to construct a story of “what happened in Maine” not only for the blogs, but for myself. But I don’t think it exists, at least not in the clean, sequential way I want it to. The facts I do know don’t add up: 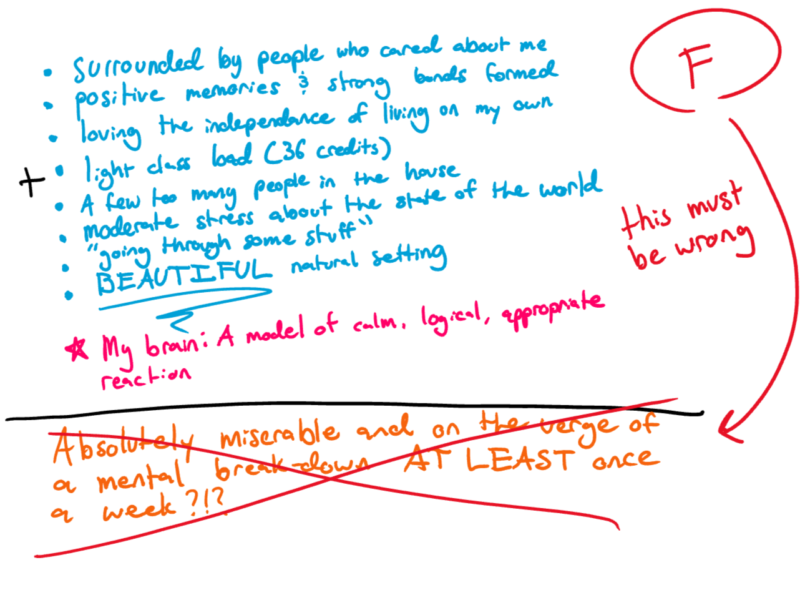 But here’s the thing: your feelings aren’t some math equation that you can just solve to find the appropriate response. Life ain’t that neat fam.

I could try to point to all kinds of things explaining why I felt terrible there, to fill in the missing ‘x’ values on the events side to try and make it add up, but it doesn’t matter. I just… did, and that’s enough of an explanation. Because of an old absolute I held –“I won’t go back home ever again”– I made an impulsive decision to move to Maine with some people I knew from East Campus, despite knowing deep-down that it might not be a good idea. But I couldn’t justify why I had reservations, and I made a promise to myself, so I went through with it; if there was no reasonable way to fill in the value for ‘x’, then my feelings must be incorrect. Once I got there I considered moving home after only a week because I couldn’t stop crying, but I didn’t understand why, so I stayed. I stayed because my brain told me this should make me happy, I should be fine, I need to be able to make it on my own in the world, because all of those things would make sense with the story I was building for myself.  But my mental health kept getting worse, and I leaned on people I care about too heavily which caused some summer housing plans to fall through. I was massively relieved when they did.

My time in Maine ended with me alone in an AirBnB on the brink of (or maybe full-on having) a nervous breakdown, OX⁠01 it def is more complicated than this, but you can petition to take a final exam at a later point in time if a) you are on track to pass the class, and b) you have difficult extenuating circumstances. Sabrina M. 21 wrote a really good blogpost about the OX process <a href="https://mitadmissions.org/blogs/entry/we-should-take-this-final-and-push-it-somewhere-else">here</a> -ing my physics final, feeling too anxious to even check my emails, and eating chickpeas straight from the can for two days. All because of what, my pride? My “logic”? Well, I’ve got news for all of you MIT applicants an incoming students: These, on their own, will not serve you well in life. That itch, that need to fill in the ‘x’ and justify your feelings, or convince yourself you’re feeling something that “makes more sense”, is dangerous. Your “should” may seem objective, but it’s not; what you think ought to be true is often just as warped by opinion as, well, a blogpost written by a 19-year-old college student. The equation is complete bullshit.

Now that I’m home and I’ve had some time to reflect on my freshman year, I’ve decided to trust my emotions simply for what they are. I felt bad in Maine, and I feel less bad now that I moved back in with my parents for the summer. That’s really inconvenient for my self-image –really, it annoys me to no end– but it’s the truth. What does that mean for me? I don’t know yet. I have some thinking to do about all the absolutes I’ve used to build my identity. Are they really serving me? I can think of a few pretty distressing situations this year where my black-and-white, “logical” approach really screwed me over until I acknowledged how I felt, even if I thought it was wrong to feel that way.

So, here I am, living in Milwaukee again, a little humiliated but definitely better off. Since this post didn’t end up trashing my time in Maine (when I can’t easily classify things as “good” or “bad”, I default to “bad” just to be safe), I might as well add some pictures of the nature. I’m not good about taking pictures, but here’s what I got. 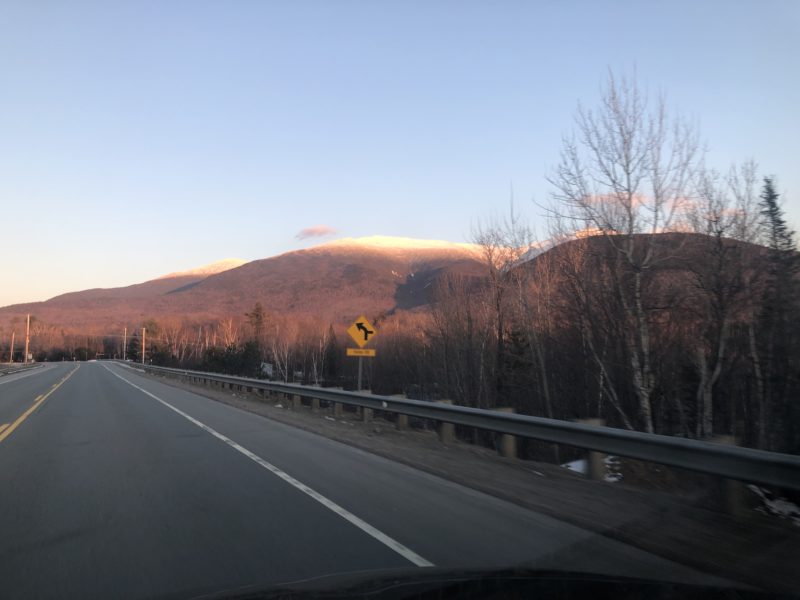 Sun setting on the white mountains <3 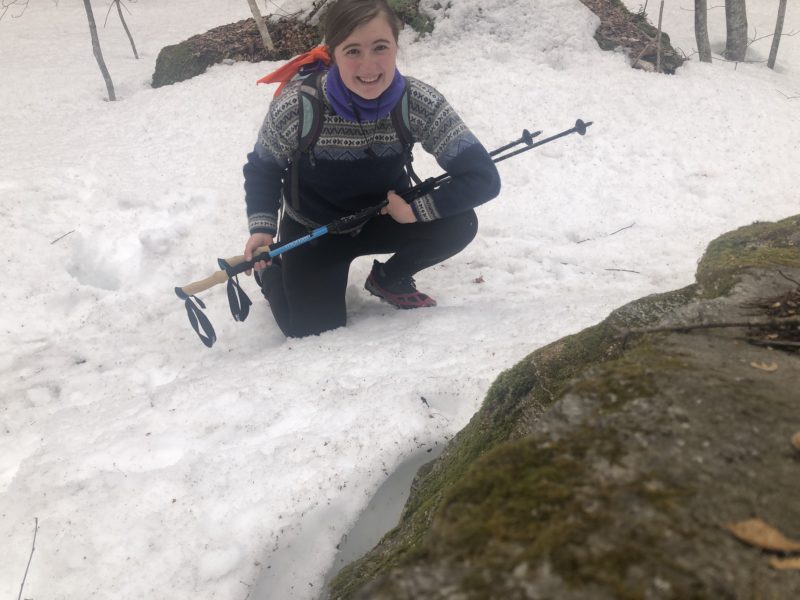 me on a very happy winter hike 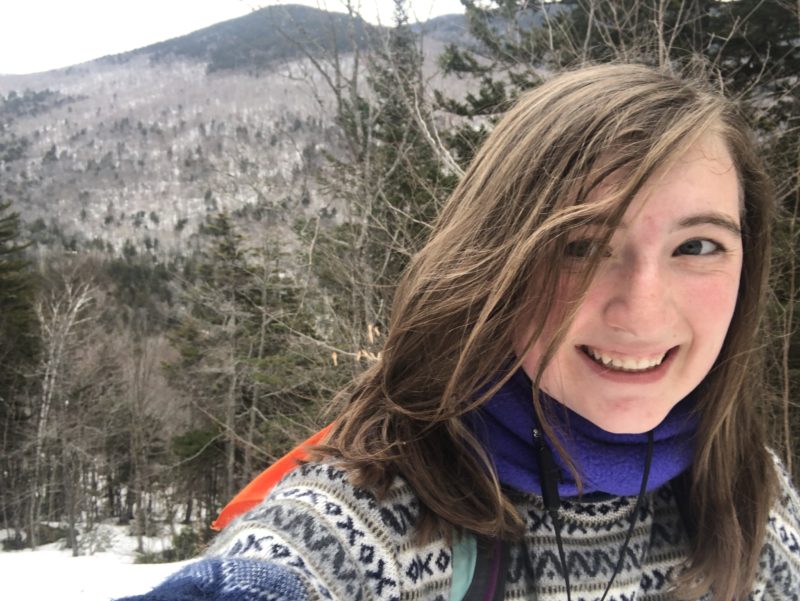 me on the same happy winter hike, right before I realized that the slope I was on was VERY slippery and I was VERY much in danger. Still got that selfie though 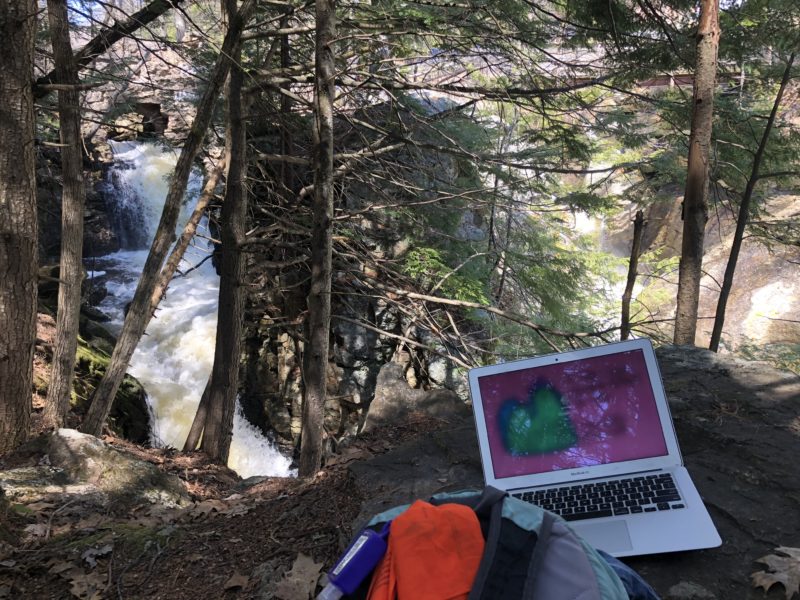 I may have studied next to a waterfall for the aesthetic :)