This is see you later.

“This isn’t goodbye, this is see you later!” I told my family as they left that Monday, August 26 from Parents Orientation. It was true. Family Weekend was only at the end of October, a mere 59 days, 4 hours, 32 minutes, and 53 seconds away. But who’s counting? In the mean time we stayed in minimal contact as I slowly matured into autonomous, independent adult. Just kidding! I still called my mom whenever I was sick. I still talked to my family every few days. But this isn’t a story about me finally being able to do laundry by myself or to know which medicine I should take for what symptoms. This is a story about how I survived Family Weekend.

It was Friday, October 25th. My family was coming at 10am. I knew I had to wake up early enough to clean and prepare for their arrival, so I set my alarm for 8am. I woke up at 11. After throwing everything underneath my bed or in the closet, I put on my best MIT gear and made the ten-minute trek to campus.

I met up with them at the Student Center – my mom, my dad, and my three younger brothers. They had even brought my grandparents and my uncle from Costa Rica. I couldn’t wait to show them all around. During CPW, I was just as lost on the MIT campus as they were. But this time, I had already been here for two months. I knew how to navigate the academic buildings and where the different labs are. I had to find something that I could show them. Something that’s a perfect representation of MIT culture. So I showed them a 400lb grand piano plummeting seven stories to its death onto an equally bulky 400lb grand piano waiting on the grass. 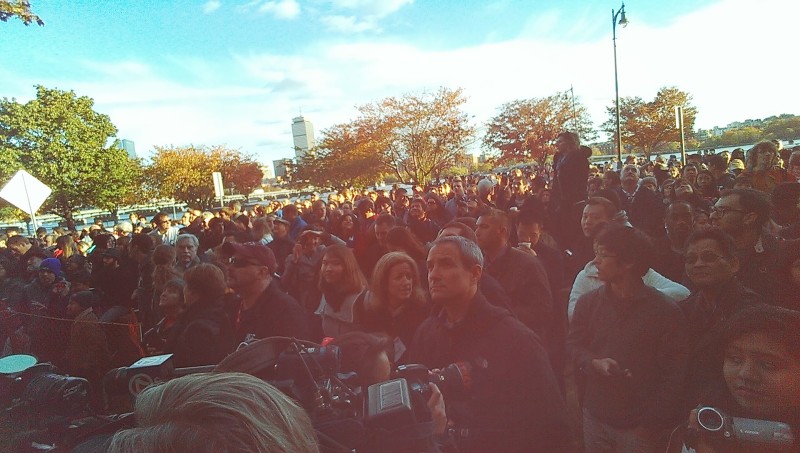 The massive crowd that gathered to watch the piano drop. 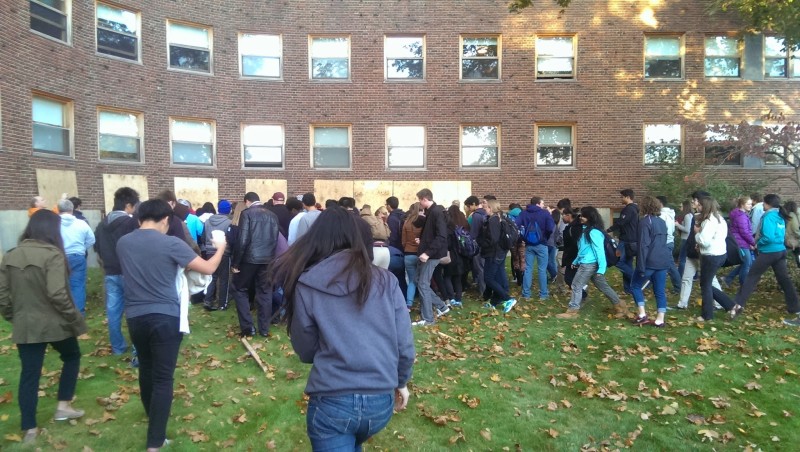 Turns out the piano was filled with candy.  They called it a “piañata”.  People scurried to the crashed piano for the candy. 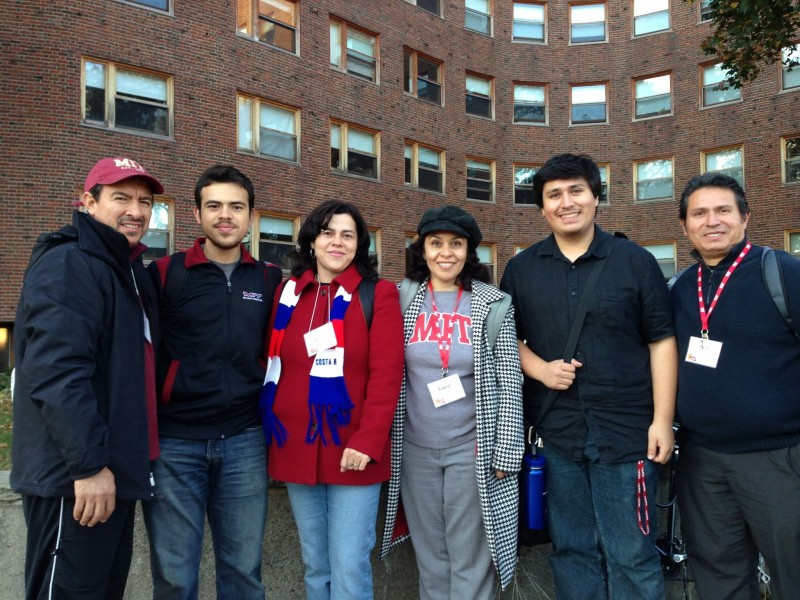 My parents and I alongside one of my friends and his parents.

Watching 800lbs of wood shatter, metal bend, and candy splatter sure builds up an appetite. Where should we have dinner? Some nice restaurant in Boston? Cambridge? Nah, my parents wanted Maseeh Dining. I didn’t blame them. When I first got here, I loved Maseeh Dining. I came from a high school that consisted of pizza, cold turkey sandwiches, and milk served in a tiny carton for lunch. Eating at Maseeh was like eating at a four star buffet on a broke college student’s budget. You walk in to chandeliers on the ceiling (or maybe I’m just imagining the chandeliers because of the regality of the place). I had told my parents again and again about Maseeh and how great it was, so that was naturally their choice of dinner. I used nearly all of my guest passes, but we managed to get all nine of us in there. I felt so bad for the chefs! We enjoyed ourselves to the plethora of lasagna, fries, burgers, salads, fruits, hot dogs, bread, cookies, orange juice, milk, and ice cream. Because of my meal plan, I had Maseeh nearly every day and it had become commonplace. However, my family still saw it as an amazingly wide selection of foods. Interestingly, that made me begin enjoying it again, even though I’ve had it nearly every day. After dinner, my family went off to attend one of MIT’s concerts and I went off to a meeting.

On Saturday, I got up earlier. MUCH earlier. 8am early. They wanted to see my frat house. And I wanted to make sure it was clean. Our frat has the reputation of being one of the cleanest houses at MIT, and all of the brothers and pledges make sure it stays that way. We clean the house weekly, taking care of it and making sure everything is in order. Our frat was holding a small barbecue for Family Weekend. When my family arrived, they were greeted by some of the brothers and met several others while inside. I told my family about all the exciting things we did during Rush and during my first two months as a pledge. They also chatted it up with the parents of other Hispanic pledges in the frat.

Speaking of Hispanic, it was time for Cena a las Seis (Dinner at Six for those without Google Translate), an annual Family Weekend event held by the Latino Cultural Center. It was semi-formal, and we enjoyed a “traditional Latino dinner with student performances and presentations, along with talks by representatives from the various different Hispanic student groups.” It was a lot of fun, and I even got a great picture. 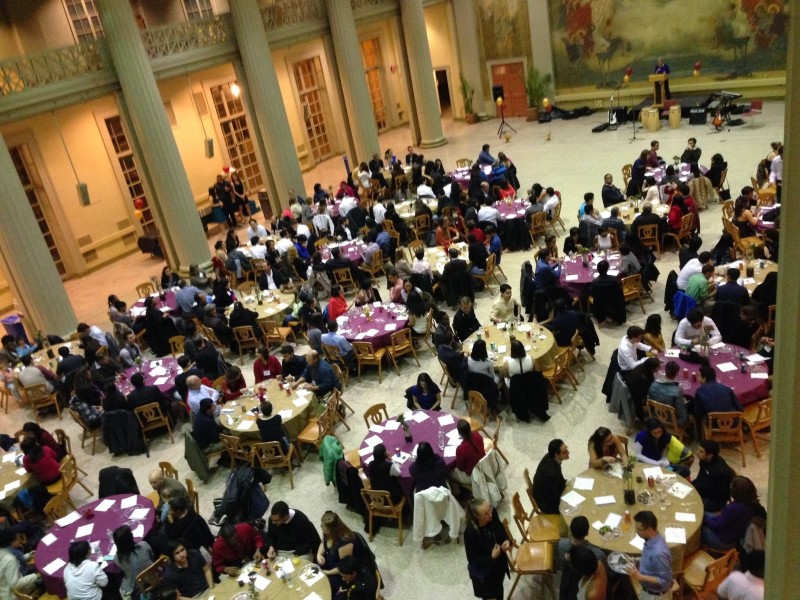 After Cena a las Seis, my family could’ve chosen just to go their hotel and call it a night, but, of course, I couldn’t let them leave without them seeing one of the most important parts of MIT Culture – a cappella. So I took them to the Greater Boston Invitational Songest, an a cappella concert held in Kresge Auditorium. We were amused by the Muses, entertained by the Toons, and surprised by the Asymptones. They sang an a cappella version of “The Fox” by Ylvis. My personal favorite was the crossover between “Badtameez Dil” and Shakira’s “Whenever, Wherever” performed by the Ohms (Seriously, if any of you Ohms ever read this, that was amazing!).

“Badtameez Dil/Whenever, Wherever” performed by MIT Ohms.  You can check out the other performaces I mentioned on my YouTube channel.

Afterwards, we went back to my family’s hotel room and watched Man of Steel. I had some nice talks with my parents and some bonding time with my brothers by playing the games we always used to play. We spent the next morning exploring Boston. Then we visited Harvard and walked around wearing our MIT gear. Family Weekend was coming to an end. When it finally came time for goodbyes, none of use felt too sad. Why? Because we knew that it wasn’t “goodbye”. It was only “see you later”.

Now there’s only 9 days, 21 hours, 8 minutes, and 32 seconds until Thanksgiving.