This Entry is Really Long. by Hamsika C. '13

And my pictures won't upload :(Edit: Actually, they finally did! Yay!

I’m on a train right now, speeding away from Darmstadt and towards Salem. Linh ’13 is sitting next to me sleeping, her right hand holding on to our suitcases. I probably should’ve put my suitcase on the luggage shelf above our seats, but I didn’t think I was strong enough to lift it that high above my head. Yeah, I know, I should work out.

This past week makes me feel like I’ve exercised enough to last a lifetime, though. On Friday, Linh ’13 and I took a train to a nearby city, R√ºdesheim, where Di ’10 had told us there were several castles we could look at. Apparently, we fail at finding them though, so instead of gazing open-mouthed at elegant stone terraces, we trekked up a mountain, at the top of which was a beautiful monument. I don’t know how I convinced Linh to brave hours under the hot sun with me instead of taking a cable car, but somehow, I did. She complained at first, but in the end, she didn’t regret it. 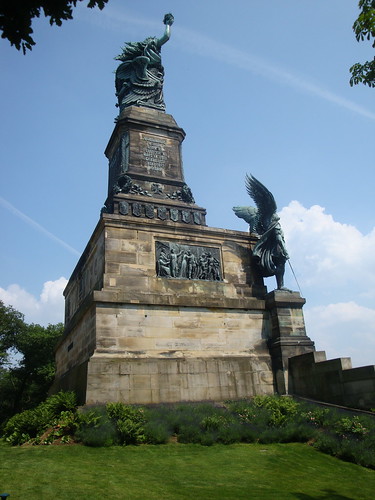 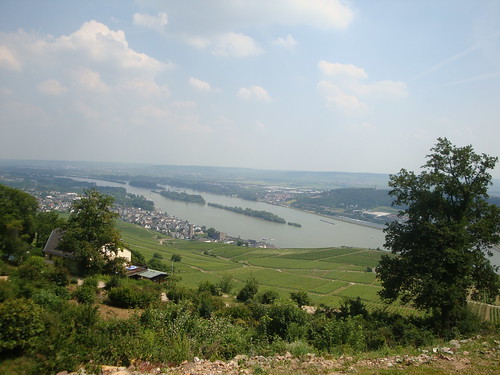 This escapade of ours explains why I look in the mirror and see a face that’s much darker than it usually is, with small bits of skin peeling off its nose. These past few days have taught me not to put faith in the widespread claim that brown people don’t get sunburned. They do. Most definitely.

Still, I’ve been having the time of my life – outside in perfect 75-degree weather, the one jacket I brought with me buried near the bottom of my suitcase. We began teaching our lessons this past week, and I prepared PowerPoint presentations and lectures on gyroscopes, gas theory, and Gauss’s law. Gyroscopes make up one of the most difficult concepts taught in 8.01 (Physics I: Classical Mechanics), so I was really surprised when they insisted that I teach it at the school. While prepping for the lesson, I went back and watched Professor Walter Lewin’s 8.01 gyroscope lecture on OCW (ocw.mit.edu); thank God for OCW. I’ve watched that gyroscope lecture three times now, and every time, it makes more and more sense to me. Because the school had a gyroscope, I was able to do demonstrations and let the students try them out for themselves. When my lesson ended, I felt so happy, proud, and lucky. I finally know why some people want to be teachers so badly; it’s really rewarding to see kids’ eyes light up with interest and understanding and to have them come up to you afterwards and thank you for what you’ve done.

The people at Lichtenbergschule thanked us in so many ways! On Tuesday, they took us to Heidelberg, about an hour’s train ride away from Darmstadt. There, we spent hours at a castle, home to a gigantic wine barrel. It was empty though, much to the displeasure of many tourists. Jeanne ’13 and I found a gigantic staircase just beside the castle; convinced that there must be something super-cool at the bottom of it, we climbed all the way down, knowing full well that each step we took going down meant that we’d have to take just as many going up. Sadly, there was nothing spectacular at the bottom of the staircase. As we huffed and puffed back up the stairs, we noticed that the steps were numbered. As we neared the top, we saw 301…302…303…”No,” I thought, “It couldn’t be…314?” But yes, it was. Pi ‚ô• The nerd in me forgave the futile trek down the never-ending staircase. 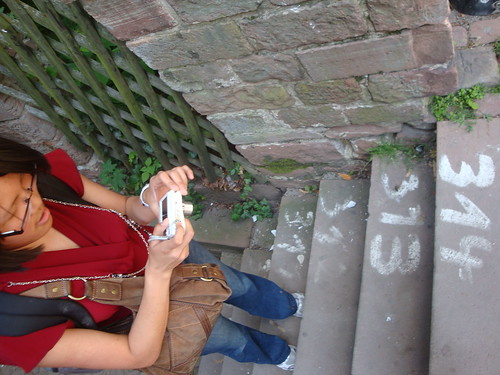 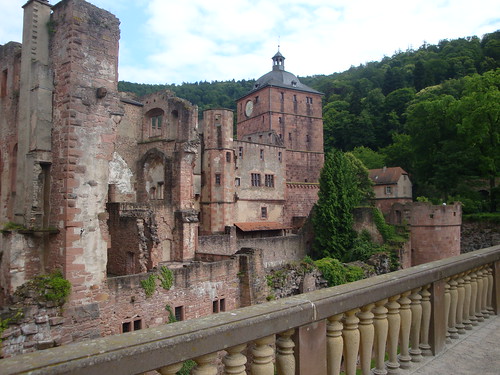 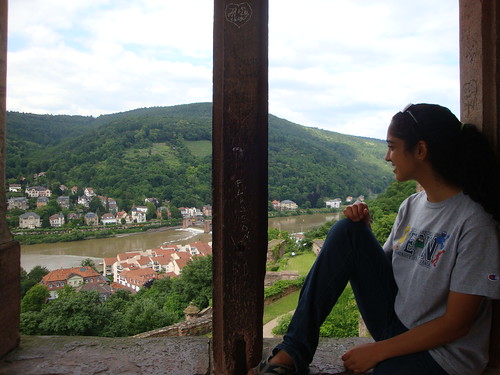 On Wednesday, we got a tour of Merck, a pharmaceutical company most of you have probably heard of (Note: The American Merck & Co. is actually different from the European Merck. They both originate from the same family though). They gave us green name badges (my name was spelled wrong ‚òπ ) and showed us the various products they make, how they make them, and what they do to ensure quality. The tour guide told us that their machines can produce about 800,000 pills every hour! At the end of our Merck adventure, we all got to take some free cosmetic products, produced with colors manufactured by Merck. The lady seemed eager for all of us to apply to Merck as summer interns. I’m not sure if any of us will though, considering that during the tour, she referred to Boston as the place where “Harvard and other schools” were located. Other schools?!?! Clearly, she didn’t know where we were from! Haha, just kidding. It’d be neat to work at Merck – so much to learn! Also – one other thing I found out: I asked the tour guide who comes up with the names of medicines, and she told me that there are three people at Merck whose sole job is to come up with names. Well, there you go, linguistics majors. Go make money at Merck! 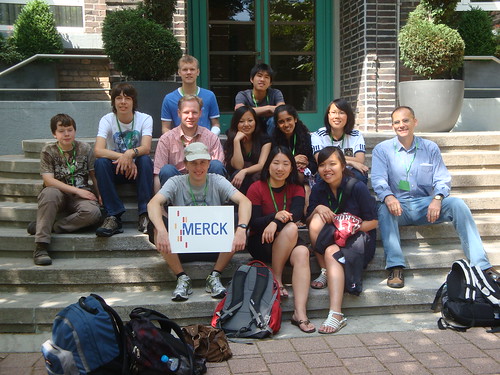 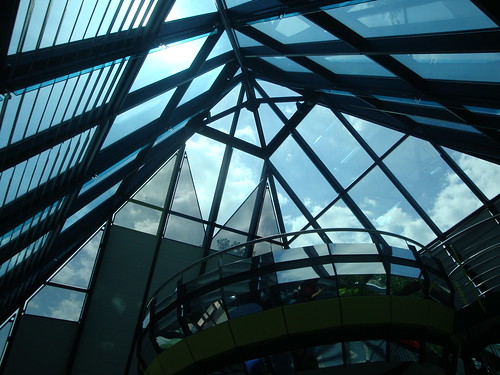 The Inside of Merck

On Thursday, we walked into Lichtenbergschule and discovered that all the staircases were taped off. Turns out, the Lichtenbergschule has hacks just like MIT does, though on a smaller scale. The 13th graders celebrate the end of the year by pulling a prank on the school and then having a gigantic party in the school courtyard. Water balloons flew through the air, and kids danced to Lady Gaga songs blasting from the speakers. Even the teachers were into it! I wish my high school had this spontaneous-prank-and-party business; what an awesome way to celebrate the completion of high school. 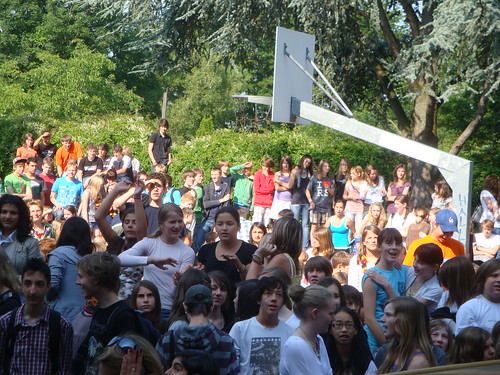 Speaking of celebrations: following the Germany vs. Ghana public viewing last week, we joined in on an epic walk through one of the city tunnels. People were laughing, dancing, drinking, and setting off smoke bombs. At one point, everyone crouched down quietly, and slowly, a wave of people jumping up and cheering started from the front and propagated through the tunnel. After Germany beat England this past weekend, the streets were filled with cars honking and people sporting massive German flags :) 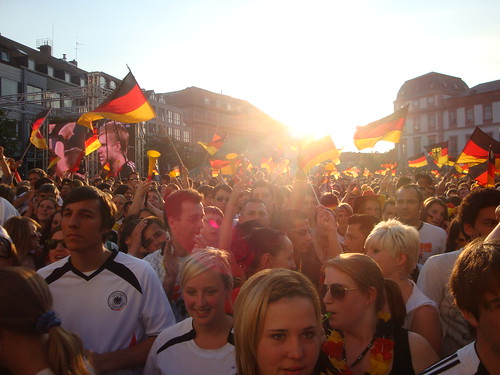 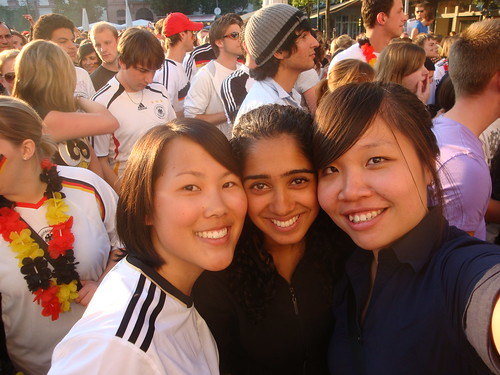 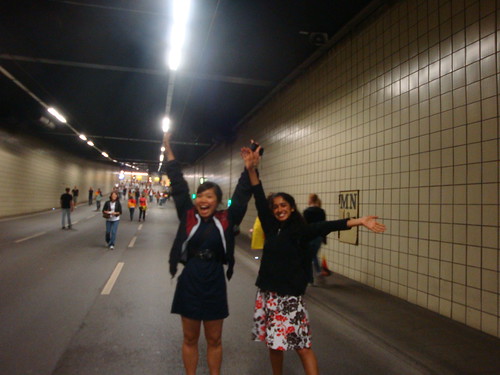 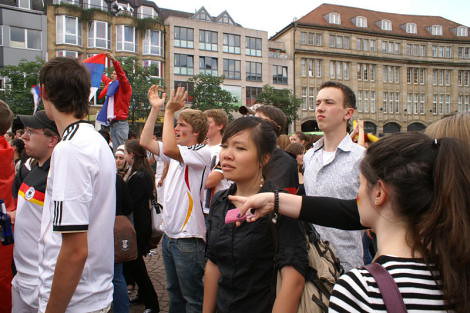 This picture of Linh ’13 made it into a German newspaper!

It feels so appropriate to be an MIT student here in Germany because we see ‘mit’ (which means ‘with’ in German) everywhere, haha ‚ò∫ At the end of this trip, we’ll be putting together a booklet on our experiences and may even make our PowerPoints, particularly our group presentation on MIT (its academics, student life, culture, etc), available online. Perhaps that will be helpful to some of you prospective students, yes?

Until next time, tschuss!

19 responses to “This Entry is Really Long.”