Thoughts from the Other Side by Kirsten L. '15

MIT through a different lens

I know I’ve practically disappeared off the blogs… BUT I promise I have had good reasons!
As some of you may know, I’ve been studying abroad at the other Cambridge, Cambridge University, for the past almost 6 months.
Here at Cambridge, instead of having finals at the end of each semester, like we do at MIT, they have ALL their finals from classes they took in their fall term (Michaelmas term) and spring term (Lent term) at the end of the year (Easter term). Since each student generally takes 5 classes a term, most third year engineering students have 10 exams. ALSO, these 1.5 hour exams are pretty much 100% of your grade in the class.

But I was lucky and only had 5 exams since I came in during the middle of the year. Of course, I say only 5… and that’s more than I’ve ever taken at MIT.
Anyways, one of the attractive portions of the Cambridge-MIT Exchange is that we get this 5 week long break between Lent Term and Easter Term but…

Third year engineers have their exams at the beginning of the term… which means we spend a lot of time over “break” reviewing our notes and studying. I wasn’t as crazy as some of the people here… who would stay in the library until midnight and be back in the library at 7 am… but it was a pretty boring month of my life. We tried to keep ourselves sane by exercising a lot and reminding ourselves that this was going to be us after our exams were finished…

After all, we only had four weeks of projects. How bad could those be? So we just forced ourselves to buckle down and do the work…

When I finally walked out of my last final, this was me:

I was so happy. It was an amazing feeling. One of the traditions here at Cambridge is that people spray their friends with champagne after they get out of their last exam. Ernesto R. ’15, who’s on the exhange with me, got these great photos of my friends getting sprayed… 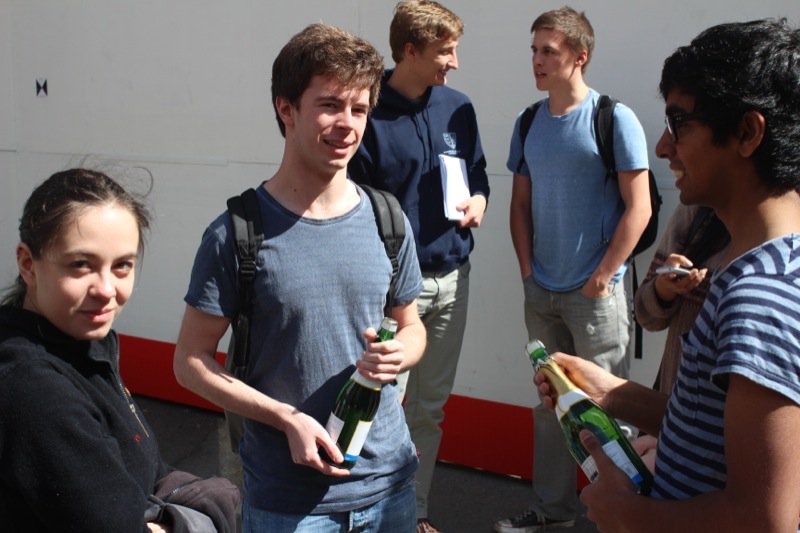 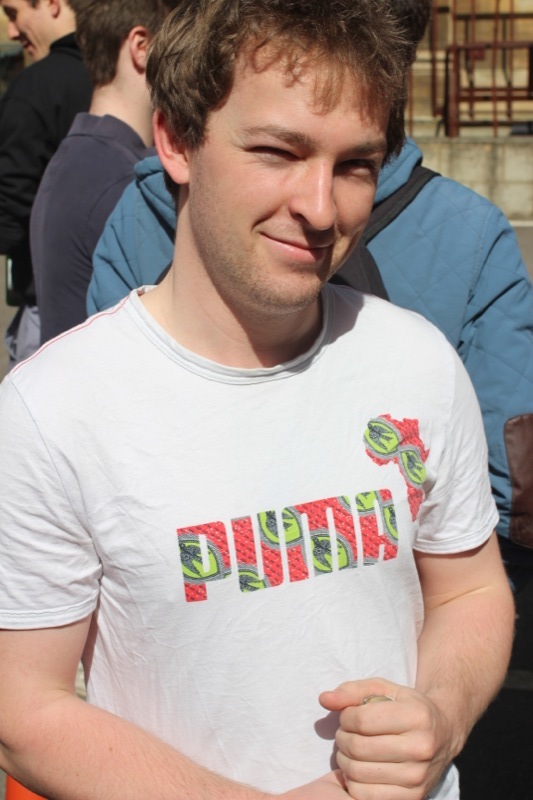 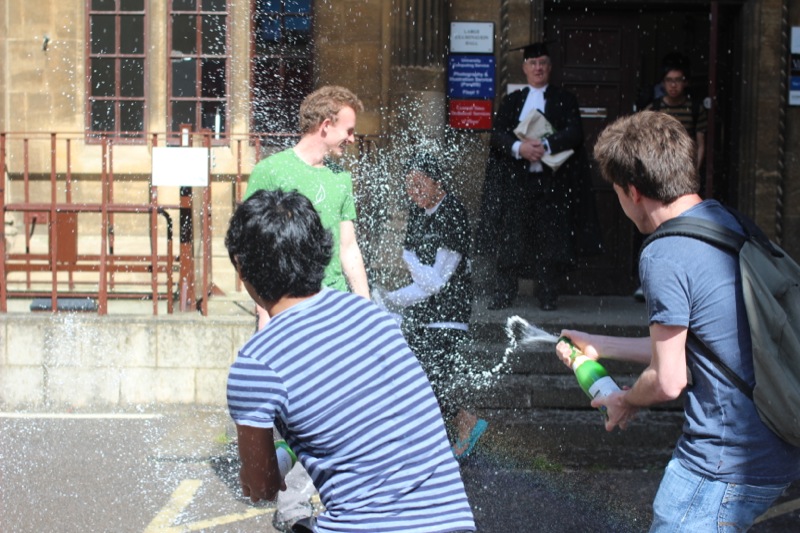 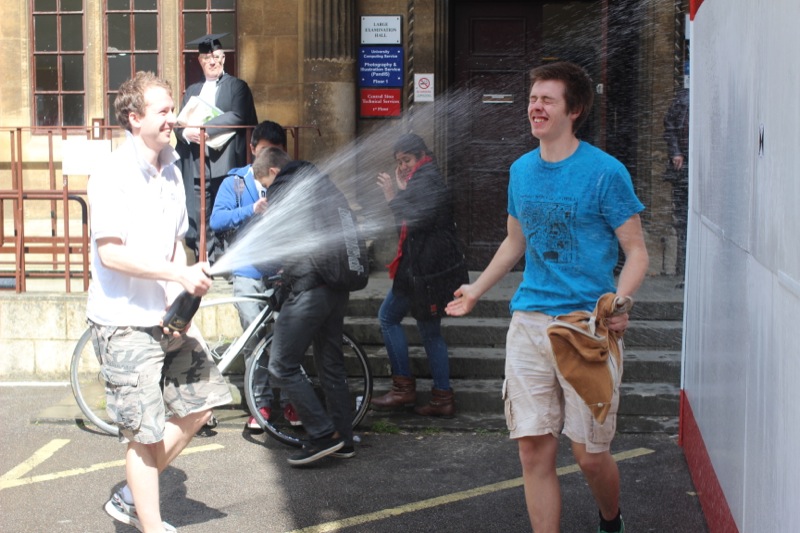 For two glorious days, us engineers relaxed and enjoyed the sunshine. It was magical.

Then projects started and only then did I realize…

In true Cambridge fashion, projects have turned out to be A TON OF WORK (ie, I’m working on the weekends) which can be described in no other manner than just sad. The amount of people I see in the department computer lab during odd hours is sad. My eyes are sad from staring at a computer screen for such long hours. So. much. sad. I feel like a tiny bit of my soul dies every time I walk into lab, but that might just be because I’m feeling my days here are numbered. That all being said, I have been making time to do some awesome things at night :) I’ve baked a ton of really delicious desserts with my friends and explored the city. 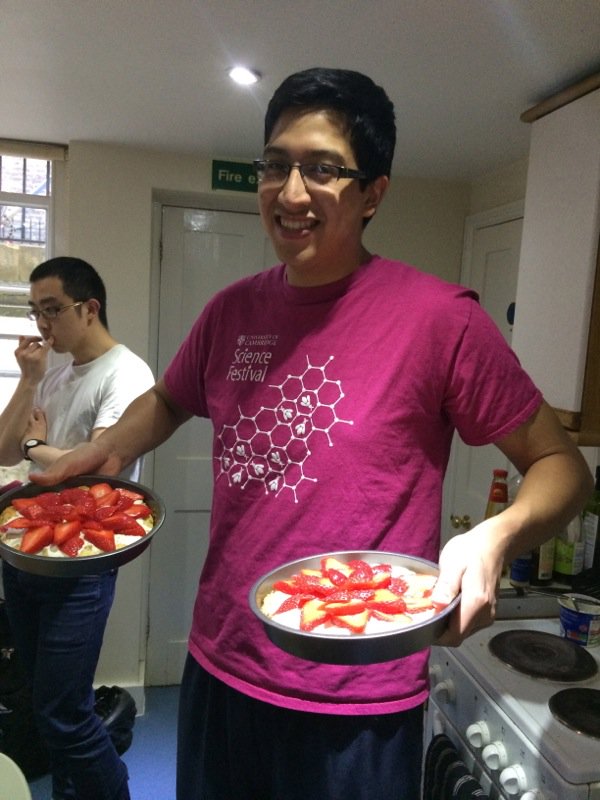 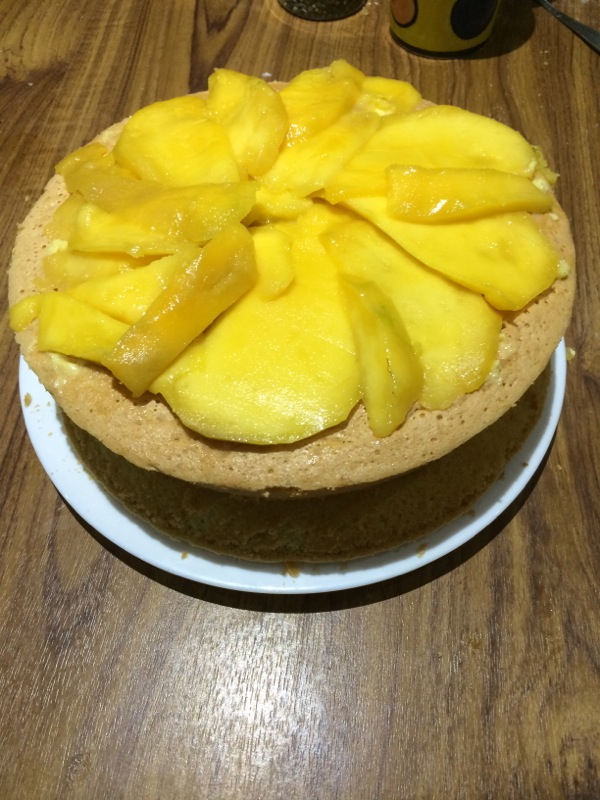 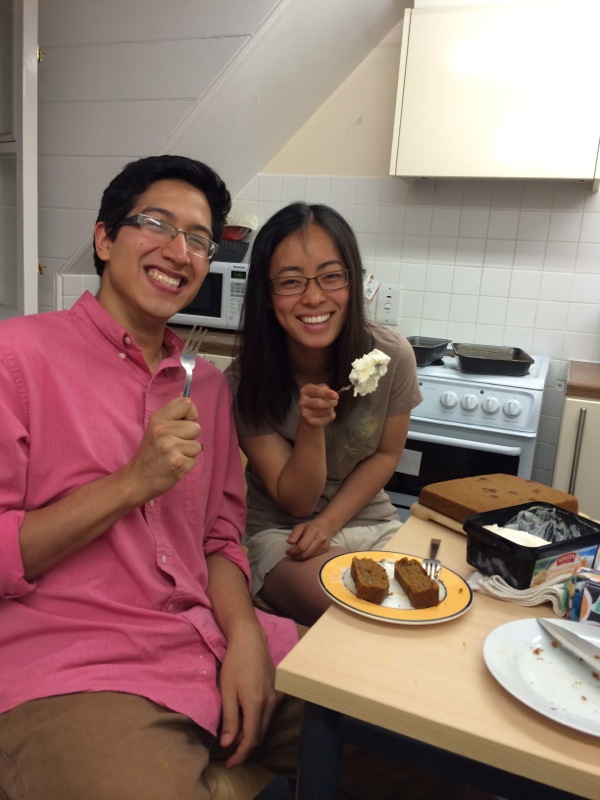 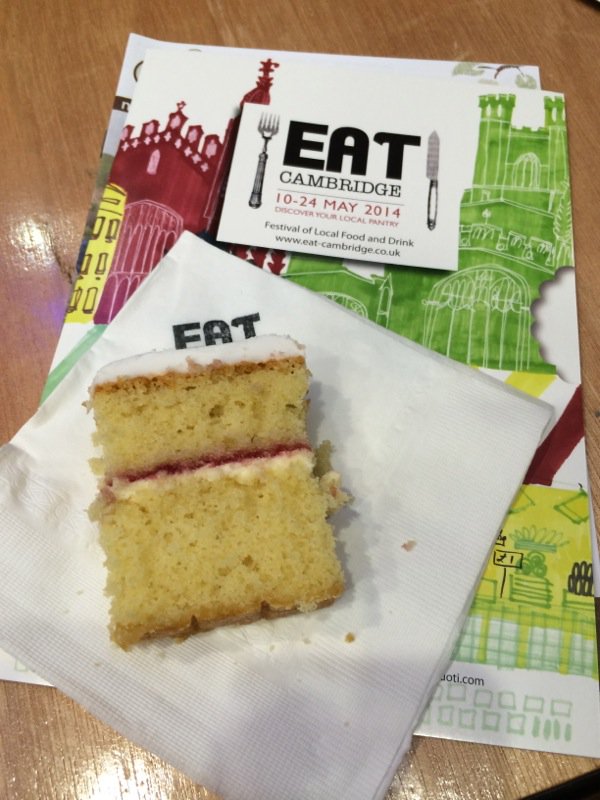 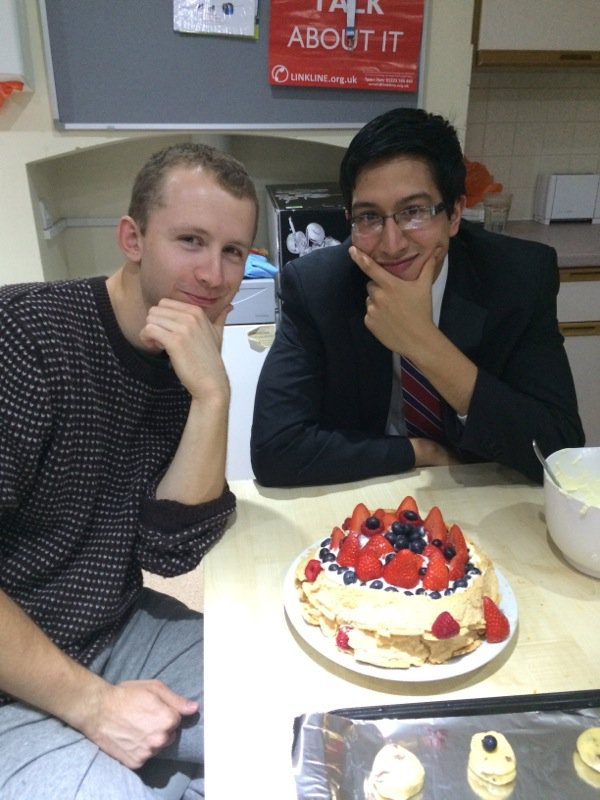 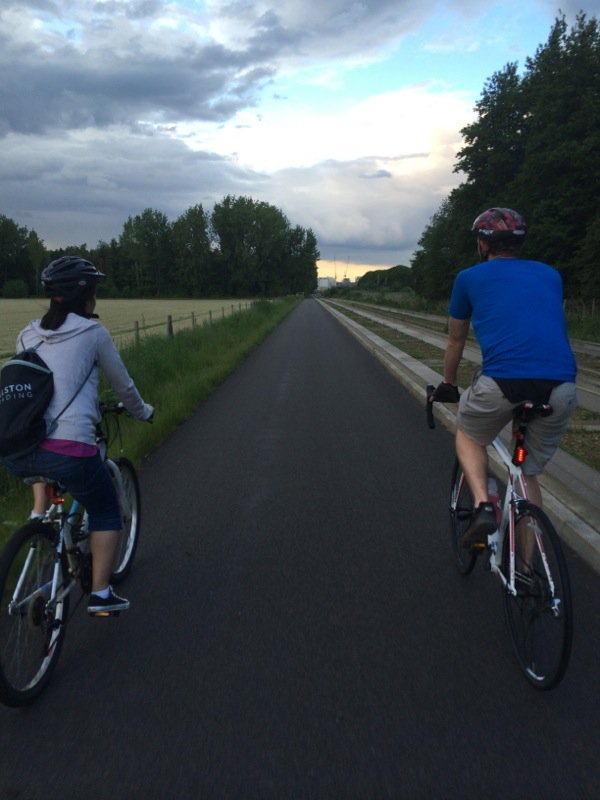 That’s one of the great things that I’ve really enjoyed about Cambridge- Being able to explore such a beautiful little city on bike and having time to bake tons of delcious things. I do like how I have more time for myself here- which I think is really important to learn more about myself.

So that’s why I haven’t been blogging too much. But those of you reading the blogs are probably here expecting to read about MIT and not Cambridge University, so I’ve compiled some interesting revelations about MIT during my time here that I thought I’d share.

1. MIT wants to help you succeed.
Part of this comes down to the fact that I’ve adjusted to learning in the MIT system, but I do feel like there are more ways at MIT where you can get help if you want to. Office hours (an hour or two where professors or teaching assistants are available to help students with questions if they have any) have literally saved me so many times during my time at MIT. When I’m just stuck beyond all belief on a problem, it was easy to get help if I needed it. We don’t have office hours at Cambridge, and I found that I really missed them. At Cambridge, they have these things called supervisions, where you and another student meet with a graduate student to review your assigned work. While I did enjoy the smaller group sizes I never felt they were as helpful as office hours because you couldn’t get help while you were working on your assigned work. I did have FANTASTIC supervisors though, and they did a good job of making sure I understood the problems I did incorrectly during the hour review. It was also nice to be able to ask all the questions you did have about your work, because sometimes in office hours there are too many people to be able to ask all your questions.
On another note, I felt like there was more of an emphasis on mental health at MIT. People talk about it more and are more aware of the stresses of a difficult academic environment. Plus, we have resources where people who are struggling can go get help. That being said, at Cambridge, you’re assigned a director of studies at your college who you can talk to about these kinds of things. It is nice knowing you have one person who knows you a little better and might be easier to talk to about personal matters.

2. Your peers want to help you succeed.
MIT students definitely collaborate a lot more than here at Cambridge. We have these bi-weekly problem sets (which are called examples papers here), and I found that most people don’t really work together on them. Maybe it’s beacuse examples papers not graded and only for your own learning, but I don’t think many people really worked on things together in the same way they did at MIT. People at MIT are more willing to admit that they’re struggling with something and work with you on the tough problems. I’ve missed that collaborative work environment here. Additionally, I’ve found Cambridge students are more competitive when it comes to grades (they refer to them as marks), but not overtly so. Here, your marks are pretty much public, so everyone knows how you’re doing. It’s a little weird, because sometimes it feels like it makes people less willing to help each other get better marks. At MIT,  people generally don’t know other student’s grades (unless you’ve explicitly asked them) which is nice. That all being said, the Cambridge engineers I’ve met here are awesome people, and I wouldn’t have been able to transition to the new learning environment as quickly without them!

3. The work is long and hard, but that’s how you learn.
As weird as it sounds, I think I learn best when I had those darn weekly problem sets. The constant feed of work actually helped me keep more accountable about learning the material and gave me a LOT of experience working on problems (which I just felt I lacked here). Nothing was worse than getting to the beginning of time to study for exams here and actually feeling like I could do very little (but that might have been because I wasn’t doing enough revision of my notes during the term). I’ve never felt that way about MIT final exams, since we usually have only a day or two before they begin, and I think I have the weekly problem sets to thank for that. Although I used to complain about the lack of time to study for exams, the truth is… I probably never never really needed that much time. I think it really comes down to the fact that I’m not used to the self studying style here at Cambridge. I think a lot of the students here are used to it, which is amazing! I wish I could sit down and study with the same focus that they have.

4. MIT has incredible resources that they let you use
The amount of software and equipment available to MIT students is amazing. After spending time here at Cambridge, I’m so thankful about at all the software we can get through MIT (like Microsoft Office, Solidworks, etc). I’m also so thankful for all the neat projects, experiments, and research that I’ve gotten to do through MIT. For example last semester, I took 2.008 (a Design and Manufacturing class) in which I got to use an injection molding machine to make yo-yos. That’s something that people don’t do get to do here. A larger majority of the work is done on the computers. I miss my hands-on work!

All that being said, I really have loved my experience here at Cambridge University. I like how to Cambridge culture doesn’t revolve around work. People work hard, but also spend a lot more time doing things they enjoy outside of work whether that be running, biking, drawing, baking, cooking, reading, etc. It’s nice to be in an environment where people can separate work and life a little better. PLUS people actually hang out during the week! Crazy.

I’ve also met some incredible people and participated in some Cambridge traditions that I’m going to miss when I go back.
One of the Cambridge traditions I’ll definitely miss will be formals, which are these three course dinners that each college hosts during the week. My friends and I went to Jesus College formal a couple days ago. Here we all are in our snazzy gowns. 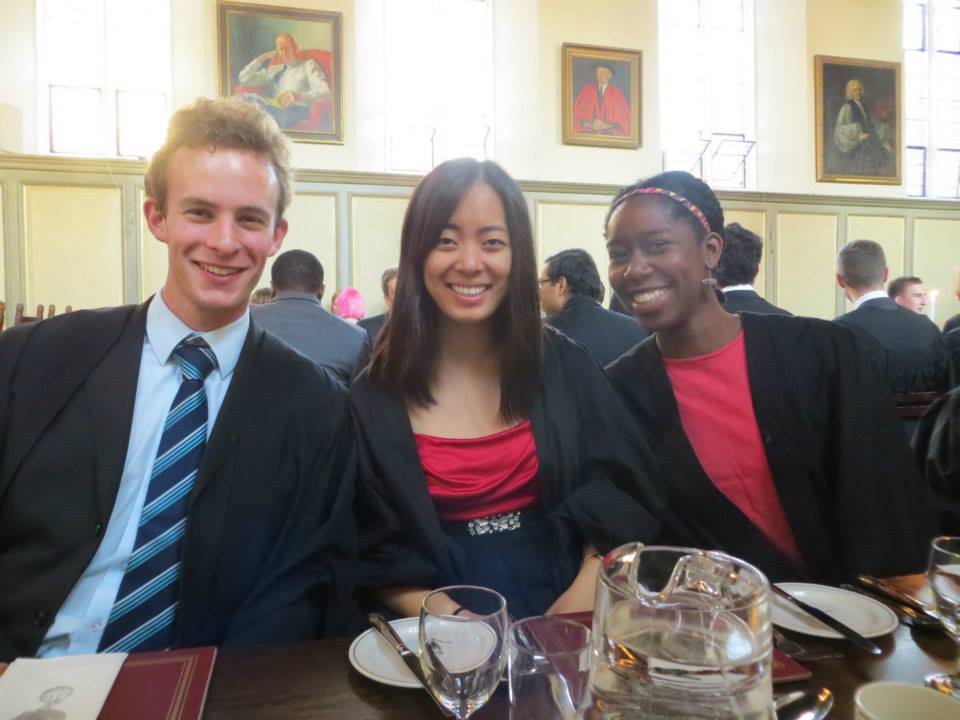 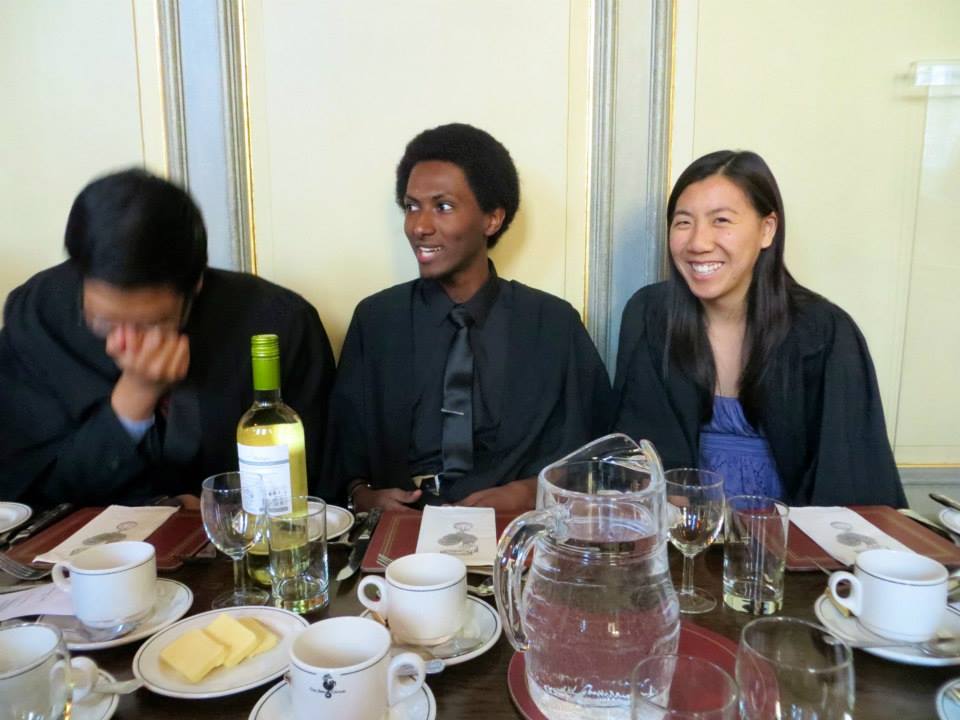 I’m not ready to leave yet!

The good news is that after next Saturday, I will be done with projects and everyone wil be done with their exams!
Normally at the end of finals, all the MIT students are pretty much like..

so everyone wants to leave MIT as soon as possible, arrive at home, then sleep for a million hours.

But here at Cambridge, everyone celebrates with Garden Parties and these massive celebrations called May Balls (which are actually in June. Silly Cambridge).