A Day in the Life

I went back to downtown Denver after work today, back to the center of the city where I was born. I felt the calling.

Actually, I also needed to exchange last year’s light-rail tickets for current ones because in my family we are cheap af.

It is summertime in Denver. The ever-present taco man spins his advertisement sign on Stout street, the same place I used to see him when I made solitary adventures downtown on Fridays in high school. I take the free bus down to the other end of 16th Street Mall, and exchange my tickets. A man says something to me–”what?”–the second time around I think it might have been a catcall so I walk quickly to the ticket window.

I give people the benefit of the doubt, but I’m not stupid either.

After exchanging my tickets I decide to hang out around the city so I go get a smoothie. These women in sundresses order “wheatgrass shots”. It looks like two ounces of dandelion puree.

I walk. I think about the boy I met earlier this week, at the light-rail station. I was wearing a sort-of suit because it was the first day of my internship.

We talked for a while. He said he’s from Texas and he’s really excited to go to Metro State (a local community college) in the fall, took a gap year after high school when his family moved here. Asked me for my number too, I didn’t give it to him. We talked some more, laughed at the weed culture in Colorado. I said I thought stoners were boring. He said, “yeah, I don’t do a lot but just once in a while you know?”

He seemed so innocent, even though we’re the same age. A friendly young black kid. Still wide-eyed about the world, I thought. Smoking and tattoos don’t make you grow up any more than wearing a suit does.

That was a week ago. Today, I walk towards the Denver Pavilions. As I’m walking another young black man starts walking by my side.

He sticks out his hand, we introduce ourselves.

“From here, how about you?”

I hesitate for milliseconds, and say “yes” although I am not.

He wishes me a good day and departs. I am taken after all–betrothed to my textbooks until I graduate. But mostly, I’m just eager to go read, up at the top of the Pavilions.

I have always liked talking to strangers, although we’re cautioned against that as children. It’s important not to be stupid of course–I don’t talk to anybody who makes cat calls, and I don’t usually give out my personal information. I don’t even mind when it’s clear that some of the men’s motives are mostly romantic (I’ll say that instead of something else), as long as they are respectful. It’s interesting enough to say hi, to hear about someone who you otherwise would never have noticed. It’s surprising, what you’ll find, and what you’ll hear. I’ve talked to plenty of random people: ladies on the train who just want to complain about their day to someone, longboarders heading toward the hilly streets, that one guy who asked if I had an earring back he could borrow (he’d lost his–I felt his pain but sadly had no extras. It’s disappointing when you can’t look as fly as you want to).

I go up to the pavilions, and I go all the way to the top. There’s a lovely view of the evening commotions. It’s only a Tuesday, but it’s summertime, and people are having dinner, taking walks, shopping, living life. I got a small snack from 7-11, and opened up my book.

I read for a long time. It’s pleasant, under the fairie lights that overhang the cafes, and as close as to the grey sky as I can easily (and legally) get. I read a book by (hopefully) my future professor, who writes about cheating, the ghetto, the papi chulos, them girls with “fly tetas”, pendejas–some things I know nothing about, but a lot of things that I do. He writes about Dominican culture, but above all, about love and people. I like his writing a lot, although his books invoke a strange feeling of melancholy grit. Like being determined to keep going, even when everything is falling apart, and you’re not really sure where you’re going in the first place.

I must look either homeless or (because I’m still wearing sort of decent clothes from work) like a crazy hipster chick, sitting on a bench outside of the movie theater, eating a cheap snack and drinking a smoothie and reading.

Whatever, because Denver is still Denver. I have always felt this city to be my Motherland, welcoming back her prodigal daughter whenever I felt trapped in the suffocating suburbs we moved to for the school districts, where there was little culture, no people, and even the damn trees were “regulated”. What cynicist thought up the idea of an HOA? In Denver, some people keep sheep or chickens in their backyards, right there in the city, houses next to the bus stop and everything. The only thing good about the ‘burbs was the safety and the preserved wilderness. After moving there, I worried sometimes that (as written in my book) my “ghetto pass was revoked”. Only certain people can understand the strange logic behind this struggle.

It rains. I’m in a cafe, writing this. It rains, but it’s that sort of silly Colorado rain, dripping dew drops while the sun is still full out, like “don’t worry, I’m still here”.

I meet yet another person today as I write this–a girl. It begins (like many conversations I have) because she asks if I am mixed. We get to talking and I tell her a bit about my two cultures, and about college.

Denver is soft. Denver, on a Tuesday, heals me. Denver reminds me that life doesn’t have to be rushed, or particularly unpleasant, or full of worry–it can just be.

More ladies in sundresses walk along the pedestrian row, the “urban campers” cluster under the storefronts of kindly managers with their dogs and giant packs. People are smiling.

I am content for the first time in a long time. Not exhilarated, not ecstatic, not depressed, not furious, not worried, not busy, not bored. Just content, to sit here and watch all the life happen all around me. The middle path.

It’s getting late, and the rain has stopped. I should go home. 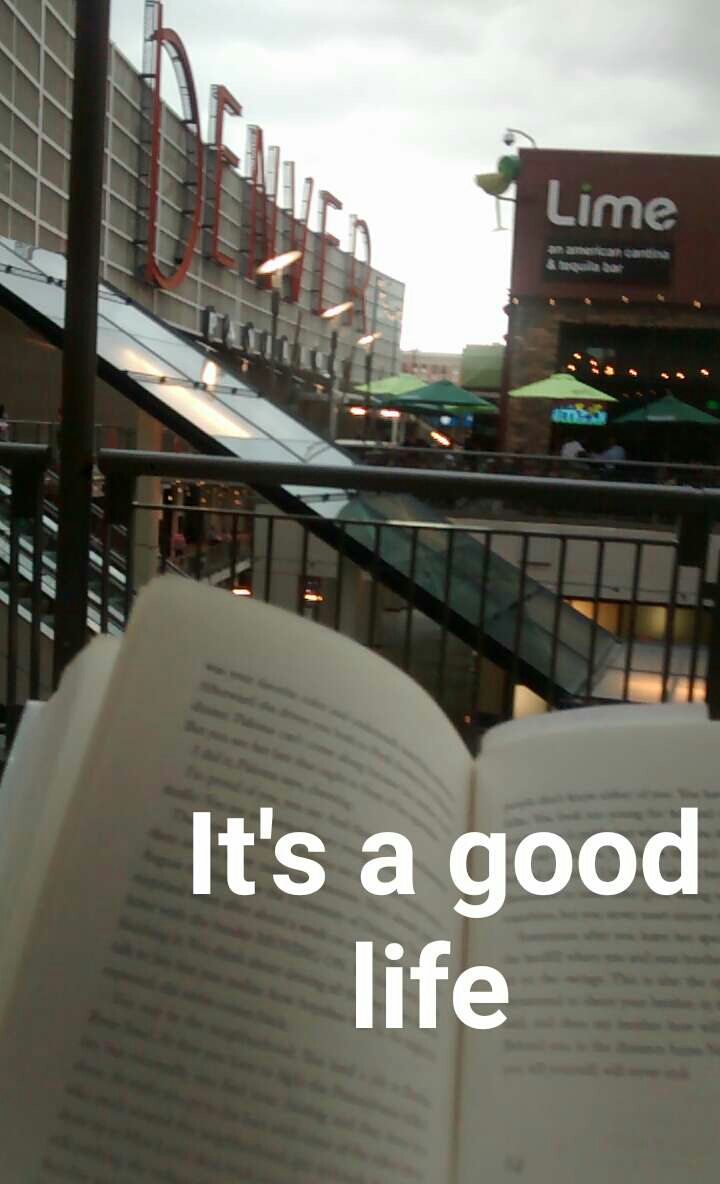