always the last one to say goodbye

In that moment, I felt that my conception of [Next House] finally contracted, collapsing from a community to a few lonely souls haunting a space filled with memories too large to contain any of us.

It is the end of my junior year, and I am twenty.

There is something frighteningly final about these two statements. I will never be a junior again. I will never be a teenager again. I feel like I should have learned something about the world by now, because suddenly all the questions I am asking myself have changed from “what happens now?” to “what happens next?” and there is so, so much static I hear whenever I ask myself this question, pounding and pounding away, what happens next—

It is the end of my junior year, and I am twenty.

There are so many stories I want to tell you about this semester. Eventually, one-by-one, they will spill from my fingertips: dropping a class for the first time, changing my major, making music, writing poems—the list goes on. These posts will be happy, encouraging; they will reflect the growth I’ve felt in the corners of this semester. I am becoming a person, slowly containing more and more multitudes.

The truth is, however, that most of this semester has been extremely difficult, in ways that I both could and could not foresee going into it. Many of the weeks have been unfortunate at best and excruciating at worst. It is possible, of course, that this pain was inevitable, or that I have grown from it. That will take time to see though, and in the meantime, I am left to question whether any of it was worth it. Am I becoming the person that I want to be? Is the pain on the way to getting there worth it? Am I doing a good job of being a good person, of being a leader, of—

It is the end of my junior year, I am twenty, and I am alone again.

Two years ago, in March of 2020, I was the last person to leave my wing of Next House. I packed up everything I owned into cardboard boxes, packed up all of the plushies and computers in my wing into cardboard boxes, and then rolled my suitcase out of Next House, not to return until the fall. It was a solitary experience—lonely, with a sort of withheld sadness. It was not something I hoped to experience again.

Last summer, I was the last person to leave my wing of Next House. I rolled my possessions in a cart up Amherst Alley, moving just two buildings over to MacGregor House. The only people left on campus were those who had exception housing, for one reason or another, and so I rolled the cart along, once again sad to be moving out alone, albeit slightly more excited to be moving outwards, away from the pandemic.

This year, of course, was different. The spring semester was a “normal” spring, something that no student had experienced before except for the seniors. The semester itself was difficult, but the normalcy promised something different. There would be more students living in summer housing this year. There would be seniors staying around for commencement. There would still be friends hanging around campus, at least for a little while. In short, I would not be quite so quickly alone at the end of the term.

On the other hand, as the end of the term arrived, I was unlucky enough to be saddled with three finals, meaning that I spent the last three days of my junior year studying for and taking exams. By the time I had recovered, many of my underclassmen friends were already gone. Yet, even though I felt sad that I had missed saying ‘goodbye’ to them, I felt happy to know that I would see them again in the fall. I felt happy that there were still friends around—seniors, people volunteering for commencement, desk workers, people with summer UROPs and internships in the area. The studying that I had done had paid off too—I did pretty well on my finals—so all-in-all, I was happy.

Senior week went by quickly. There were lots of shared meals, lots of time spent together in the main lounge, and lots of relishing the time we had left together. With the rush of the semester finally over, there was an opportunity to step back and really enjoy life again, and so I did just that. Sure, there were tasks that kept coming up, but I did my best to keep them small, and focused on spending a lot of time with my friends, and I was happy.

Finally, Friday was Commencement. I volunteered so I could see all of my senior friends walk across the stage and get their diplomas. We got pictures together and ate together and sang together, and we celebrated. In the moment, I thought I might be sadder to see my friends prepare to go, but I was so happy to see their work pay off, and to see them walk across the stage. They had done it. 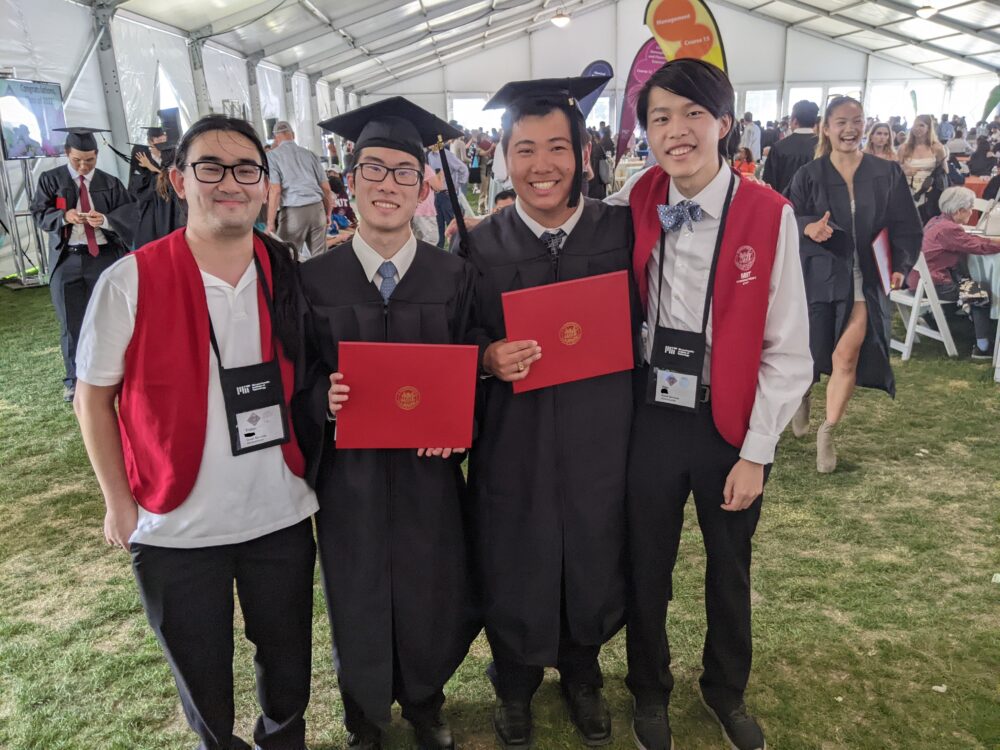 one of many, many photos

Saturday was a frenzy of packing and of saying goodbye to folks who were leaving slightly earlier. My roommate left in the early morning, leaving me with all the rest of the room to pack and clean up, and the realization that I had a lot more stuff than I thought I did. I missed him already. Time was running short. Eleven of us went to dinner together Saturday night, and though none of us said it out loud, it was, in many ways, a last supper of sorts. We packed up the main lounge together this time.

On Sunday, one by one, all the remaining people trickled out of Next House. For each leaving senior, we’d gather a farewell party, waving at the Uber as it went up Amherst Alley, and then catching it again as it went down Memorial Drive. Slowly, the people bidding farewell became the people being bid farewell, until just two of us—both juniors—remained. We ate lunch together, and then returned to Next, running out the dregs of our time together.

Eventually, it was his turn to go, and I was alone again. 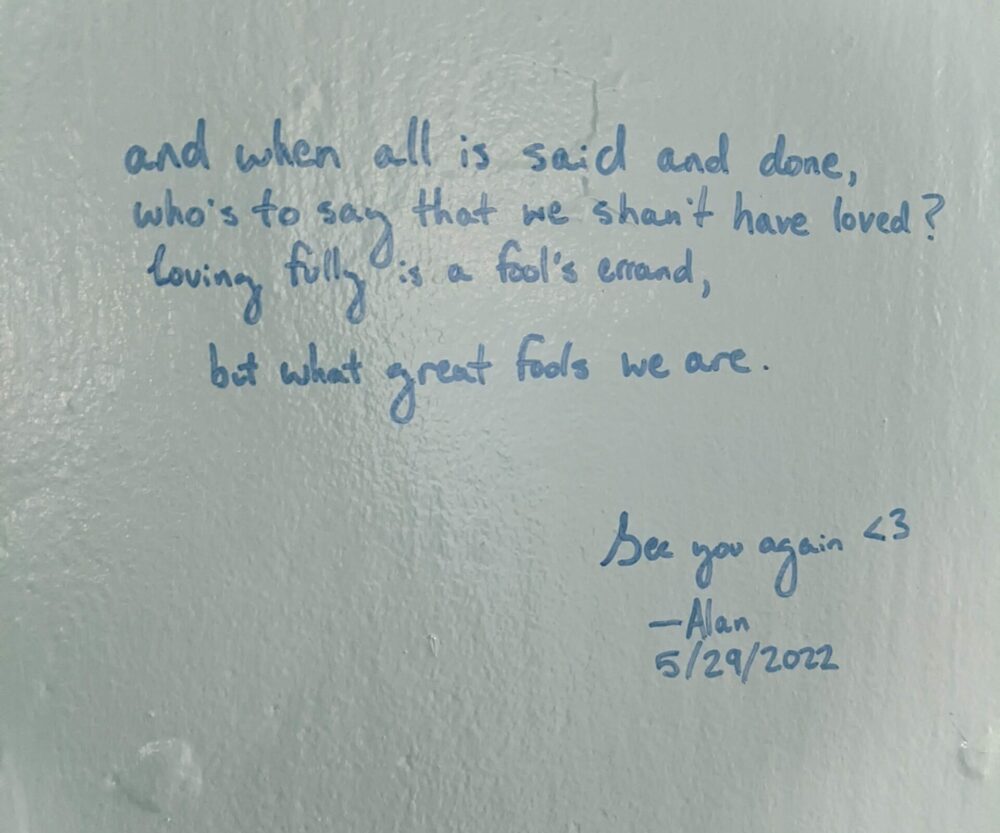 There is something magical about the feeling of walking down an empty hallway. In the fall, the empty hallway feels like an infinite source of potential. There is another set of memories to be made, new stories to be told, and new friends with whom to share the ups and downs of life. In the spring, the empty hallway represents a husk, a shell from which all the life has been removed. The field has been harvested; it will lay fallow for a while yet.

For the past two weeks, I had been looking forward to being alone this summer. I am by nature an introvert, and spending so much time with people and being so busy has been draining, regardless of enjoyment. The truth is, however, that being the last person to leave is always difficult. And, sure, there are more people around now than there have been in past years, and there will be people again in the fall, but moving out still feels solitary. It reeks of finality, even if I know I will be back in the fall.

It is especially hard to move through the sadness of seeing the graduating seniors who have made your life so wonderful for the past year or more go. As I finish my packing, I think about lasts. Maybe I have seen some of these people for the last time, eaten a meal with them for the last time, played Mario Party with them for the last time, the list goes on. Maybe we will meet again, but under what circumstances? How long will we be able to talk for? How different will we be? This group of people, this semester—this is what home meant for me, and now it is gone.

Soon, it will be my turn for lasts. My last REX, my last first day of undergrad, my last major requirement, the list goes on. I’ve grown a lot at MIT, and I have learned so much in the past three years. I have many unanswered questions: What comes next? How do I prioritize the people and activities in my life in a way that ultimately is best for me? These are questions that I’ve grappled with time and time again, and maybe they will always be hard questions. This, too, is frightening.

Of course, there will be people again in the fall, and there will be home again. It will be different—not better, not worse, but different. Different people to spend my lasts with, to answer life’s great questions with. Each group of people is special, and the unique circumstances of this semester will not be the same as the unique circumstances of next semester. The oft-quoted A.A. Milne line goes “how lucky am I to have something which makes saying goodbye so hard.” How lucky am I to have people who make saying goodbye so hard.

It is the start of my senior summer, I am twenty, and I am alone, but not really, and not for long. I stand on the threshold of my room, all of my belongings packed into boxes and suitcases as I prepare to move to my summer assignment. I look over the room one last time— 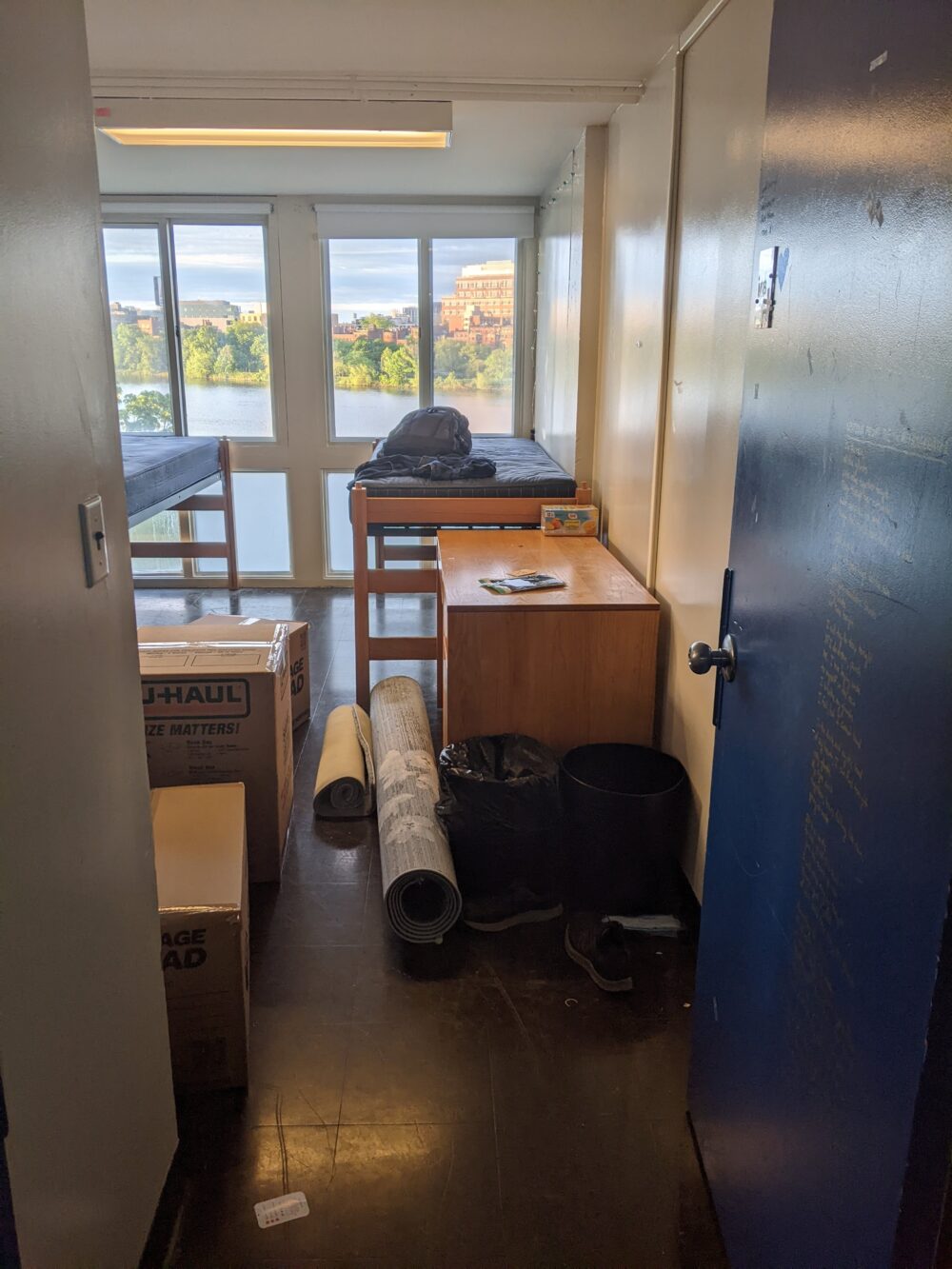 —and I turn out the lights.