How about 'em EA decisions?

Well, I guess that depends on how patient of a person you are, but I don’t think I’ve ever really been patient. When a big event looms, I mark its approach in a big red box. When I was but a tiny fetus, I remember counting down those nine long months to birth with a lot of snarling and kicking around. On the day I finally arrived on Earth, my patience had fast vanished, which explains the “bawling, puking and hair-pulling” antic I mentioned in my profile.

My parents and siblings know all too well that when waiting for food at home, I turn into this hyperactive raging rhino. I check the fridge, stare around, pick up a tomato, laugh hard, put the tomato back, sigh, and shut the fridge. Two minutes later, I return to the fridge. Repeat activity. This continues on a loop until food arrives.

Nine months ago, I was counting down the hours to the release of the Regular Action decisions, 3/14, 6:28pm in Boston (Pi Day, Tau Time). 3/14, 11:28pm in Nigeria. Someone on College Confidential had posted a link to a countdown timer. Several others had made posts about their excitements and fear and raw nervousness. Slices of optimism. Slices of pessimism. It really only added to the anxiety, but beneath that, there was a layer of community. It’s interesting how you can bond over agonizing with people you’ve never seen before. It’s probably part of the application experience.

When the countdown timer ticked its way to less than 30 hours, my palpable fretting grew a notch. Naturally, I got my laptop out and wrote about how I felt. Hours later, I went to my high school where Pi Day was being celebrated. I spoke with friends, gushed over a cake with a pi-shaped icing, and got back home with slightly over six hours left on the countdown timer.

What next? I watched an episode of Fringe. Then I watched Lion King Parts 1 and 2. Prior to that, I’d watched both movies enough times to chant every line, but it still felt good watching them again, especially with my siblings. I still cringed at Mufasa’s death, and by the end of the second volume was a hair strand away from bawling about cruel fate and all such melancholy thoughts Lion King sometimes inspires. At the time, just about three hours were left.

I went to the sitting room, where my parents and siblings were. They asked if I was alright. “Sure,” I said, managing a grin, taking a seat. We spoke about random things. Time really did speed up in those last three hours. My heart had settled, but it picked up again with five minutes to go.

With a minute to go, I smiled at my mom. She smiled back. It was a warm, encouraging smile, and wordlessly, it told me I’d be fine regardless of the outcome. I went into my room. I was alone. I picked up my I-Pad. I watched the timer count down the final ten seconds. The AC hummed. My heart thudded. Those two sounds were all I could hear. I told myself I’d be fine. I went to decisions.mit.edu.

There’s really nothing left to say that hasn’t already been said before. Decisions are tough. We all know that. Amazing applicants get rejected. We all know that as well. A great deal is involved in the admissions process, and while trying to figure out “behind-the-scenes” of the committee, while trying to imagine if they’d frown at that one improperly used comma or brush it aside, it’s easy to get bogged down in the details from which fright and anxiety emanate, and lose sight of an overarching picture. What you see this coming weekend on a certain webpage will mark an important day in your memory, at least for a while. The moment before you see it, you’re likely to reach a crescendo of anxiety. After that moment, the next instant shouldn’t matter anymore to the extent that it super-inflates or super-deflates your self-esteem. If there’s joy or disappointment, take it in and experience it for the time that you need to. Then go on. There’s a world of memories still waiting to be made. I know this is a tough time, but I promise you: you’ll be fine.

Now, let’s talk about silly things. Or anything at all.

I’ll start with tips for math and physics tests. 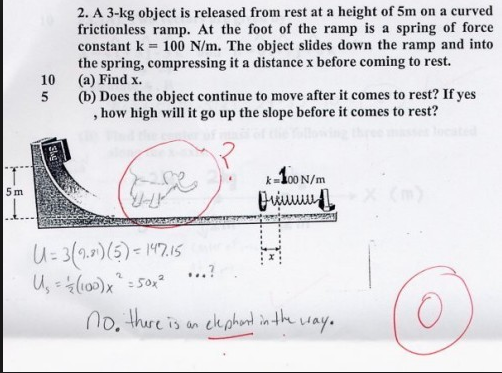 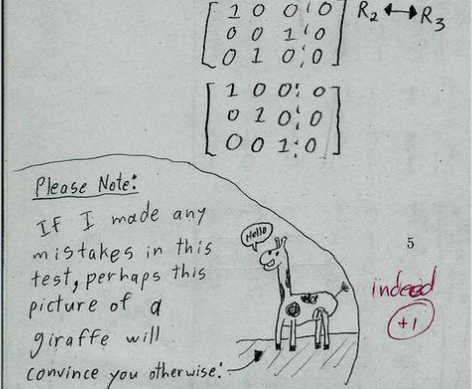