Trust me, those are some pretty big shoes

Try to find me in this picture! 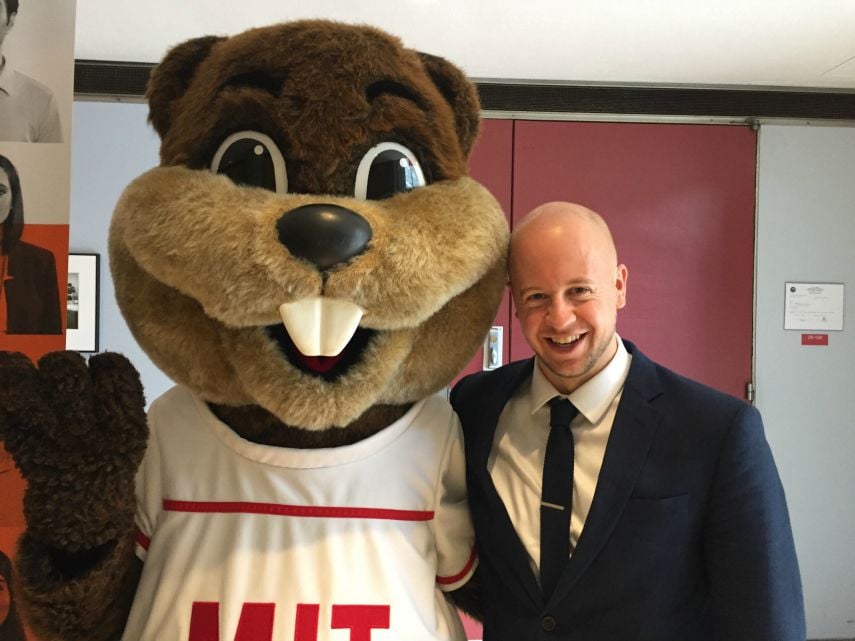 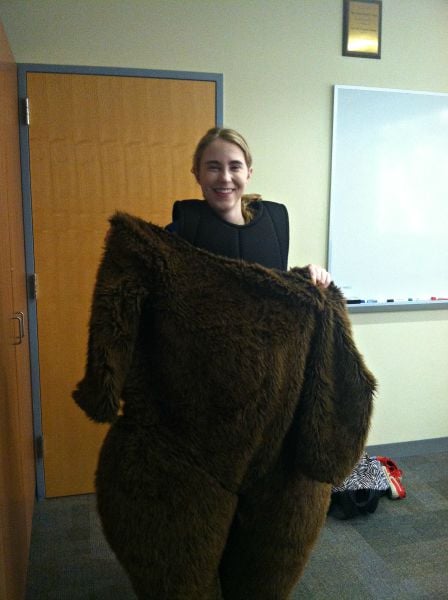 When I got an email last week from Chris asking for volunteers to man the Tim the Beaver costume that weekend, my response was, naturally,

I managed to tone it down enough to send a coherent response and spent the next twenty-four hours compulsively checking every email alert on my phone until I got the good news.

And that’s pretty much how, one week after starting classes at MIT, I got to be Tim the Beaver. 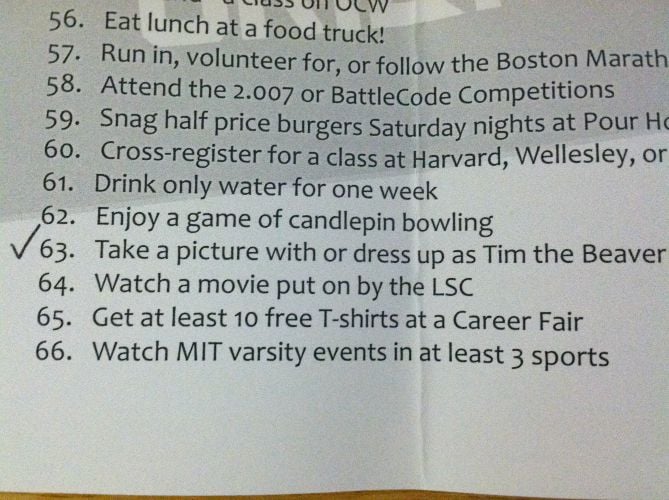 Get to check that one off my list of 101 Things to Do Before You Graduate!

It’s always sort of fascinating when something you’ve been taking for granted turns out to be a lot more complex and thought-through than you originally realized. It was really interesting seeing all the equipment and preparation that goes into making a mascot!

For one: there’s a process behind putting on the Tim costume.

And an application. And a video. In fact, there’s an entire website moderating the rental and upkeep of Tim. If you want a printable and check-able list of all the steps to becoming MIT’s favorite beaver, you can find that too! Before you are deemed trustworthy of walking in those furry two-foot-long shoes, you have to complete the required “Tim training” and then take a comprehension quiz to verify your preparation. This beaver isn’t messing around!

And then there’s the costume itself. Beneath the plush exterior, there’s a whole infrastructure to keep Tim and his avatar functional and comfortable.

For instance, I bet you didn’t know that Tim comes with his own personal cooling system. Step 1 of donning the costume is taking the custom Tim the Beaver ice packs out of the freezer and arranging them in a vest that the performer wears strapped to his chest. Then, before putting on Tim’s head, you have to remember to turn on the personal fan installed inside. (It took me and two other MIT engineers to get the AC working, haha!)

Then, to give Tim his lovely pear shaped-figure, the performer has to put on a set of body rings. The “body form” is reminiscent of a Victorian hoop skirt affixed around the midsection, and makes you look like a bottom-heavy roly-poly. (I find this piece of clothing hilarious.) 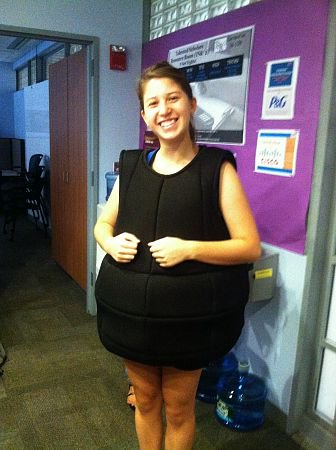 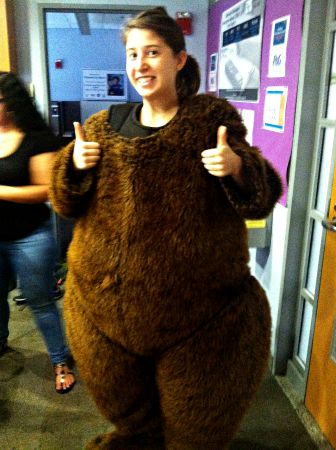 Ceri also volunteered to be Tim later in the day, and let me take pictures of her while she was putting on the suit!

After stepping into the furry body suit, it’s time to put on Tim’s head.

Here’s the truth: Tim has a really, really big head. You don’t realize how big Tim’s head is until you really take a good look at someone standing nearby and compare proportions. As a performer, you’re actually looking through Tim’s mouth. Before putting on the costume, I was a little worried that I was going to be too short. I didn’t realize that the head adds a good foot and a half to your height!

Because of the big helmet, Tim has almost no peripheral vision, and his big furry feet make it hard to walk. I have a whole new appreciation for whoever was being Tim the Beaver in the picture I took during the chaotic freshmen trip to the New England Aquarium. 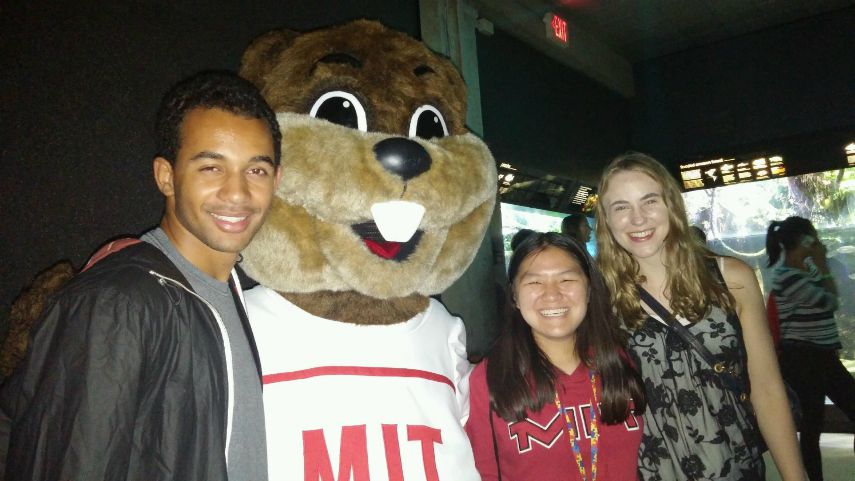 In the aquarium, it was dark and crowded and the floor was uneven, and Tim was working it like a pro. Here he’s posing with me and my friends.

Thankfully, Tim has a chaperone at all times, to help with navigation (and to make sure he doesn’t get up to any antics ;D)

Finally, after getting dressed and making my way over to the venue, Tim was ready for his moment to shine!

I was having so much fun getting to take pictures with everybody, I couldn’t help grinning ear to ear the entire time (even though Tim couldn’t stop smiling if he tried!).

In true presidential fashion, I even got to take a picture with a baby. He was really enthralled by the fuzzy suit!

Getting used to the Tim costume took some finesse. I couldn’t see anything to either side of me, so I had to kind of guess where people were while trying to pose for a picture with them. I’m pretty sure a couple times someone sidled up without me noticing them and then was standing there wondering why Tim didn’t want to take a picture with them! The trick was to stick your arm out to the side whenever someone looked like they wanted a picture and let them navigate. ;)

Because of the heat and weight of the costume, there’s a forty-minute time limit on how long one person can wear it, so after thirty minutes I was called off duty. 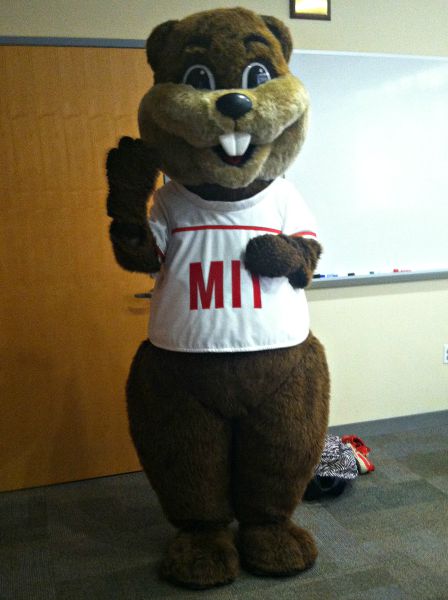 She’s reaching the safety limit on the suit, captain. Time to abort and commence extraction.

But before I left, there was one thing I absolutely had to do first. 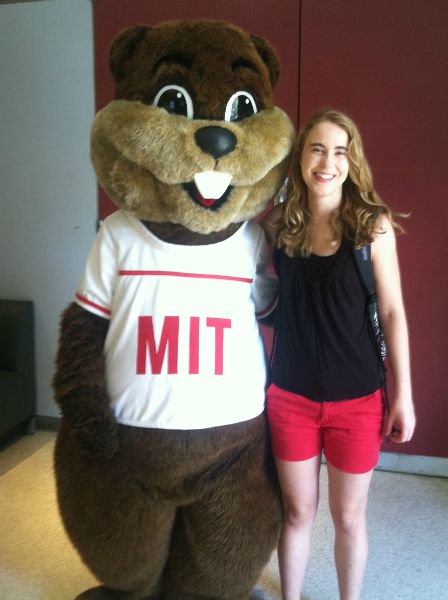 Now I can say that I’ve actually been Tim the Beaver…how cool is that?!?!

***P.S. Big thanks to Ceri for letting me use the pictures I took of her putting the costume on! She makes an awesome Tim :D