Do You Have A Core Curriculum? by Matt McGann '00

Today, I’m back in the office (but only for a day) after doing three college fairs in New York City this past week. It was a fun week!

First was the College Night at the Bronx High School of Science. Fellow alum/interviewer Mark, who graduated from Bronx Science back in the day, joined me in the classroom to which MIT was assigned. Next door was a nice colleague from Washington University in St. Louis, and down the hall was a colleague from Bowdoin College. Overall, more than 150 other colleges were scattered in classrooms around the building. It was pretty busy for the duration of the two hour event.

Each college fair I do seems to have one question that gets asked with proportionate frequency, and on this night that question was, “Do you have a core curriculum?” The answer is, yes, there are some classes which all MIT students, whether they major in Biology or Music, must take, though there is some degree of choice for each of the required pieces. These mandatory classes are known as the General Institute Requirements, or GIRs.

The GIRs consist of 17 classes, 9 in math, science, and technology, and 8 in the humanities, arts, and social sciences. The math/science/technology component of the requirement breaks down as follows:

Some of these requirements, most often single variable calculus, can be fulfilled with AP/IB exams or college transfer credit. The first six courses listed above are most commonly taken in the freshman year and are known as the “science core.”

There are a variety of ways to take these courses. Each of the science core classes have different “flavors.” For example, biology, or 7.01x, has three different flavors which cover the MIT basics of biology but each with a different focus, such as genetics/genomics or the environment.

The different flavors are not the only options for the science core. Many students will join Freshman Learning Communities to take much of the science core. The freshman learning communities often offer a coherent freshman curriculum, very small classes, and a common meeting space. There are four Freshman Learning Communities: the Experimental Study Group, or ESG, the Concourse program, Terrascope, and the Media Arts & Sciences (MAS) First Year Program.

Each of the 8 required humanities, arts and social science (HASS) classes are elective, but must fulfill several requirements:

Unlike the science core, you cannot fulfill any of these requirements with AP or IB classes. Also, please note that the intersection of any of the above groups need not be the null set. That is, some classes will fulfill 2 or 3 of the above criteria. For example, many of the HASS-D courses are also HASS-CI courses, and your concentration may have a HASS-D or HASS-CI course as a part of it.

Also unlike the science core, these HASS classes are usually spaced out over the length of one’s MIT career. With 8 required classes and the normal student using 8 terms to get a degree, most take at least one HASS course a term. I averaged closer to 2 HASS classes each term, mostly because there were many classes I wanted to take.

The second college night I participated in was at Stuyvesant High School. The Stuy college night was more structured than that at Bronx Science, with 4 presentation periods where families could choose the four colleges they wanted to hear from, and rotate through one 20-minute session with each. A fifth session was designated an open session for questions and answers. 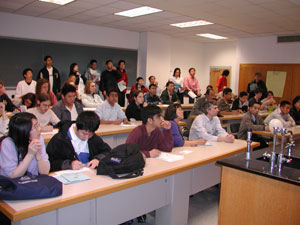 There was a standing room only crowd at Stuyvesant.

I was joined at this college night by recent graduates/interviewers Ed and Jen, both of whom are off to Columbia School of Business next year for their MBA, and Larry, an MIT-trained architect and long-time interviewer in Manhattan. Larry also has ties to Columbia as he is helping to develop the University’s master plan.

It is hard to present MIT in 20 minutes, especially when you’re used to having 40 minutes for an on-campus information session. I had to very quickly run through things that I normally have more time to explain. For most of my four sessions, though, I did get to have tangents to this week’s two big events, President Susan Hockfield’s inauguration and the Time Traveler Convention.

One thing that seemed to surprise many of the students and parents at this college night is that we require three SAT IIs (one in math, one in science, and a third of your choosing). If you are a junior and have not taken any SAT IIs yet, I highly encourage you to sign up for the June administration of the exams (and, yes, pay the College Board a late registration fee). You can take 3 SAT IIs in one sitting, and it is usually a good idea to take at least two. We will also accept scores from the SAT II administrations in the fall.

The final college fair I did was for the Gateway Institute, a program for minority and low income students. The fair was held in the Great Hall of City College, a beautiful space. 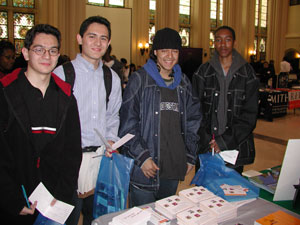 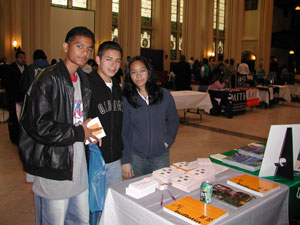 Some students posed for pictures at the MIT booth. 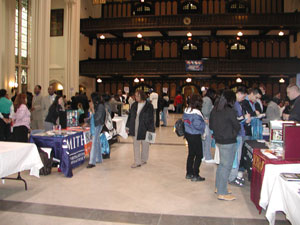 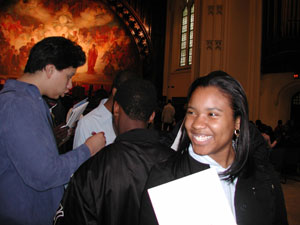 The Great Hall looks like a Cathedral of education.

The popular question of this fair was, “Tell me about your neuroscience (or psychology) major.” At MIT, Course 9 is Brain & Cognitive Science, which the department describes as “at the nexus of neuroscience, biology and psychology.” Some of the notable Course 9 faculty include Nobel Prize winner Susumu Tonegawa, Nancy Kanwisher, Ann Graybiel, Emilio Bizzi, and of course President Susan Hockfield.

Course 9 is also completing an awesome new building this fall; check out the images at this site. The coolest thing about the project is that railroad tracks and trains go through the middle of the building. The building will house both the Picower Center for Learning & Memory and the McGovern Institute for Brain Research.

Tomorrow, I will fly to Phoenix to attend the Intel International Science & Engineering Fair (ISEF). I will be hosting a reception on Thursday afternoon after the public viewing, and also checking out the various projects. If you’ll be participating in ISEF, best of luck to you, and I hope to see you there!