doing all the things

I decided this summer was the summer I’d get my life together, once and for all.

For the last several summers, I’ve floundered in a soup of confusion and unease when it comes to my future. I taught in New Zealand and Jerusalem, I rode a train across the country, I tried doing humanities research. Some of it provided clarity for what I didn’t want to do—my destiny should be nowhere near grant-writing or transcribing or anything that is the disastrous combination of boring and detail-oriented—but every year, the leaves would redden and fall, and I’d slide back into the immediacy of assignments and exams with no true idea of what my life would be like after graduation.

In retrospect, I should have been more proactive. I didn’t go to career fairs or recruiting sessions; I didn’t upload my resume anywhere; I never paid enough attention to application deadlines or interview prep.

All of this is silly. Do not be like me. I’m not saying you have to be that guy on LinkedIn who calls himself a “incoming summer analyst” starting in October, but it is good to explore professional opportunities and try on different lives while you are nineteen and free of any responsibilities or commitments.

This summer, I decided I would make up for my previous lack of doing things by doing all the things.

What it is: This was the first commitment I made. Last fall, I was accepted into a tech and social good fellowship after an interview I was sure I’d failed. The fellowship provides a community of like-minded peers, a weekly speaker series, an opportunity to help a nonprofit with a technical project, as well as a software engineering internship at a startup.

How it’s going so far: I feel super lucky to meet some incredible people. Last week, I got to chat with another fellow who made a viral dating app for his college and also worked on a startup that sends mail to incarcerated folks. One of our speakers was Cathy O’Neil, the author of Weapons of Math Destruction, and I was fangirling the entire time. And I’ll be working with a nonprofit devoted to dismantling systems that perpetuate racialized policing.

My internship itself is going well. My mentor is knowledgeable and I’m learning a lot about Django, Git, and deploying code. Something I dislike: as a software engineer, you’re often working on one piece of the codebase and don’t have much jurisdiction over the entire product. If I were to work at any larger company, I suspect this frustration would be compounded. (I spoke to someone who works at a place that rhymes with Schmacebook, and she said that her job is about analyzing the data behind user clicks on certain parts of the webpage. And it wasn’t even the cool part of the webpage.)

What it is: I didn’t realize until late April that perhaps I wanted to do an REU (Research Experience for Undergraduates) to see if I wanted to go to math graduate school. By that point, no math REU was still accepting applications—except for one started by Budapest Semesters in Mathematics, a program I participated in last fall. I procrastinated on the qualifying problems until the last day and then spent fifteen hours straight solving them. This was a stupid decision. I had a math hangover the next day, which is like a regular hangover, except it arises not from partying and being awesome, but from proving various properties of 3-uniform hypergraphs.

How it’s going so far: After I was accepted to the program, many people worried I wouldn’t be able to handle an REU and a software engineering internship concurrently. And that is probably true for normal REUs, which carry forty-hour-week commitments. But this REU only meets twice a week, and the workload is light. Due to time zone differences, the meetings rarely conflicts with my internship working hours. So it’s been pretty manageable so far.

Graph theory is fun! And writing papers with other students is fun! Figuring out how to make a proof rigorous is less fun. But doing this for only five to eight hours a week is great and I wouldn’t want to think about math full-time.

Thing #3: learning how to drive

What it is: Since self-driving cars are not yet available for the masses, I have been inspired by Olivia Rodrigo and am trying to get my license.

How it’s going so far: I failed my driving test at age seventeen, then let my permit expire. So I had to take a new knowledge test in Oregon to qualify for a new permit. However, due to COVID, our state’s DMVs are appointment-only. Since I live in Portland, the most populous city in Oregon, all nearby DMVs were already booked full for the next month. So my boyfriend and I drove to a place three hours away for me to take the test. Good news: I passed!

My mom says that, given that I also passed the knowledge test back in high school yet failed the driving test, this is not a strong indicator of my actual chances at getting my license. 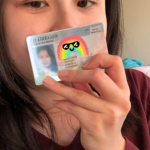 What it is: Okay, this isn’t exactly a getting-my-life-together agenda item, but maintaining friendships is important, and in the last year, it was so easy to lose touch with people and let relationships deteriorate. Last Friday, I flew to northern New Jersey to stay with my boyfriend for a week and see some friends in New York City. In August, I’m hoping to see some other friends in the Midwest.

How it’s going so far: It’s difficult to summon the activation energy to reach out to people? I sometimes get so anxious over whether they actually want to hang out with me, or if it’ll be awkward to see them in person, or whatever. But yesterday I got boba and lunch with a friend from high school who now lives in NJ, and I’m still seeing lots of people over the next several days. Friends friends friends.

What it is: I signed up for some low-commitment stuff (such as a workshop on AI ethics), started investing into cryptocurrency, bought books about getting your life together…I’m trying to clarify my values and truly figure out how I want to spend this last year of college.

But it’s been really helpful to reflect on my life and consider what I want to cultivate. I’m trying to stay in better touch with people who are important to me. I’m sorry if I haven’t texted you back. I’m sorry if I ignored your Slack message, but also, if you were trying to socialize with me through Slack, that was a losing battle anyway.

It’s a busy summer, but I’ve been having a lot of fun. Honestly, I prefer this to attending classes and completing assignments. The responsibilities push me to become more of a Real Adult. If anything, I wish I’d started interning earlier, but those other summers were good, too.

Is my life more “together” than it was before? Difficult to say. On some superficial level, yes; I have a job and research and hopefully, a driver’s license soon. But the illusion of going somewhere can be so compelling that one does not bother to question whether the destination is worthwhile.

But you can’t drive without a license, so for now, I’m going to focus on learning enough to go anywhere at all.

The name's Rona, which stands for Return On Net Assets. No joke. I'm from Portland, Oregon, which means I think tap water from any other city tastes inferior. I entered MIT as part of the class of 2020, but spent a gap year working at a startup in New Zealand. I spend a lot of time making up…
Keep Reading