A few weeks ago, a friend at Princeton traveled up to Cambridge for some fancy tech-programming-computer science-something-or-other job interview. He suggested that we meet up during his short stay in the area, and so we (me and another very close friend) met him for a meal before showing him around our dorm. Back at Senior House, he made an interesting comment: “you can actually tell that people live here!”

It’s funny how much we take for granted as residents of the East Side. In a similar instance, while we were moving into our temp rooms as little baby prefroshies, my boyfriend’s* mom had a bit to say about the colorfully painted walls. Apparently, when she attended college at a certain Ivy institution in New York, dorm residents would be fined if they so much as stuck a tack in the wall. They would fill the little holes with white toothpaste before they moved out in order to pass inspection and avoid these fines. Meanwhile, in Senior House… 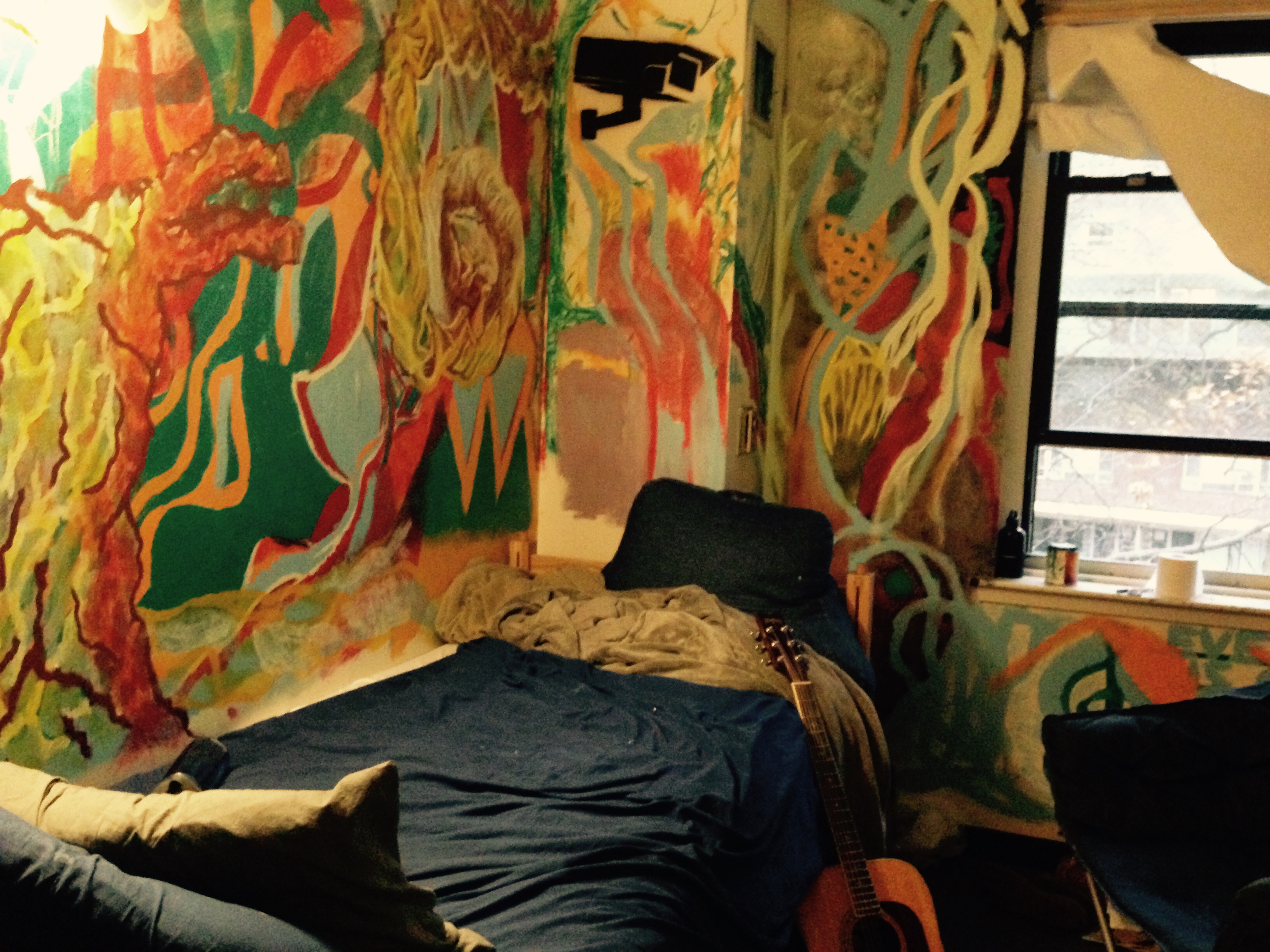 Nick H. ’18 is not planning to cover this with toothpaste.

*and yes, we got into/came to MIT together. Though statistically improbable, it does happen!

If you’re familiar with East Side culture, you’re probably aware that the halls of our dorms are covered with residents’ artistic impulses, for better or for worse. Some people paint intricate masterpieces, others paint interesting patterns, and still others decorate the dorm with the kinds of absurdities/obscenities that you’ll come to appreciate if you live here. But painting individual rooms is a slightly different thing, because you don’t have to get each painting pre-approved as long as you follow certain guidelines in a contract you sign beforehand. I.e, more freedom to just do whatever. And that’s exactly what we do.

Nick H. ’18, a friend on my floor, moved into a mostly-white room with a few anarchist symbols spray painted onto the wall. And I mean, while anarchy is all good and well, Nick is just the kind of creative person who immediately opted to make something more interesting out of his living space. I think the first color he bought was this tealish kind of green. He took the brush, dipped it into the can, and started swirling it around on the white wall in whatever direction it wanted to go. No mistakes, no stress, just freeform self-expression.

A bit later he added layers of blue and yellow. Then came red and white, orange, brown, “watercolor” style blending, chalk, and combinations of colors in increasingly abstract/absurd/creative ways. The entire thing is an accumulation of many different days of work, and it’s still quickly evolving as he adds more layers (and invites friends to do the same). A month ago it looked entirely different. A month from now…. well, who knows. 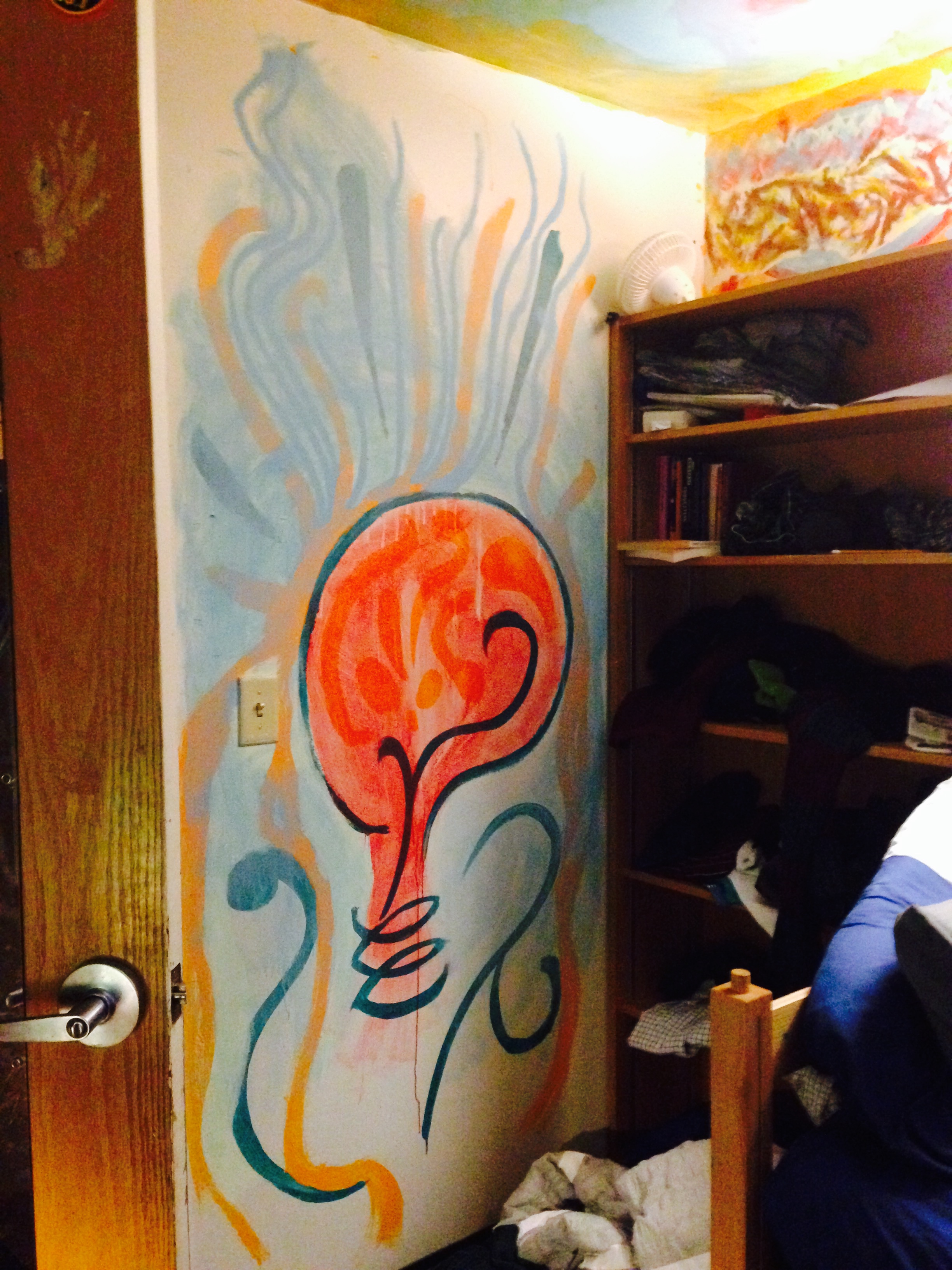 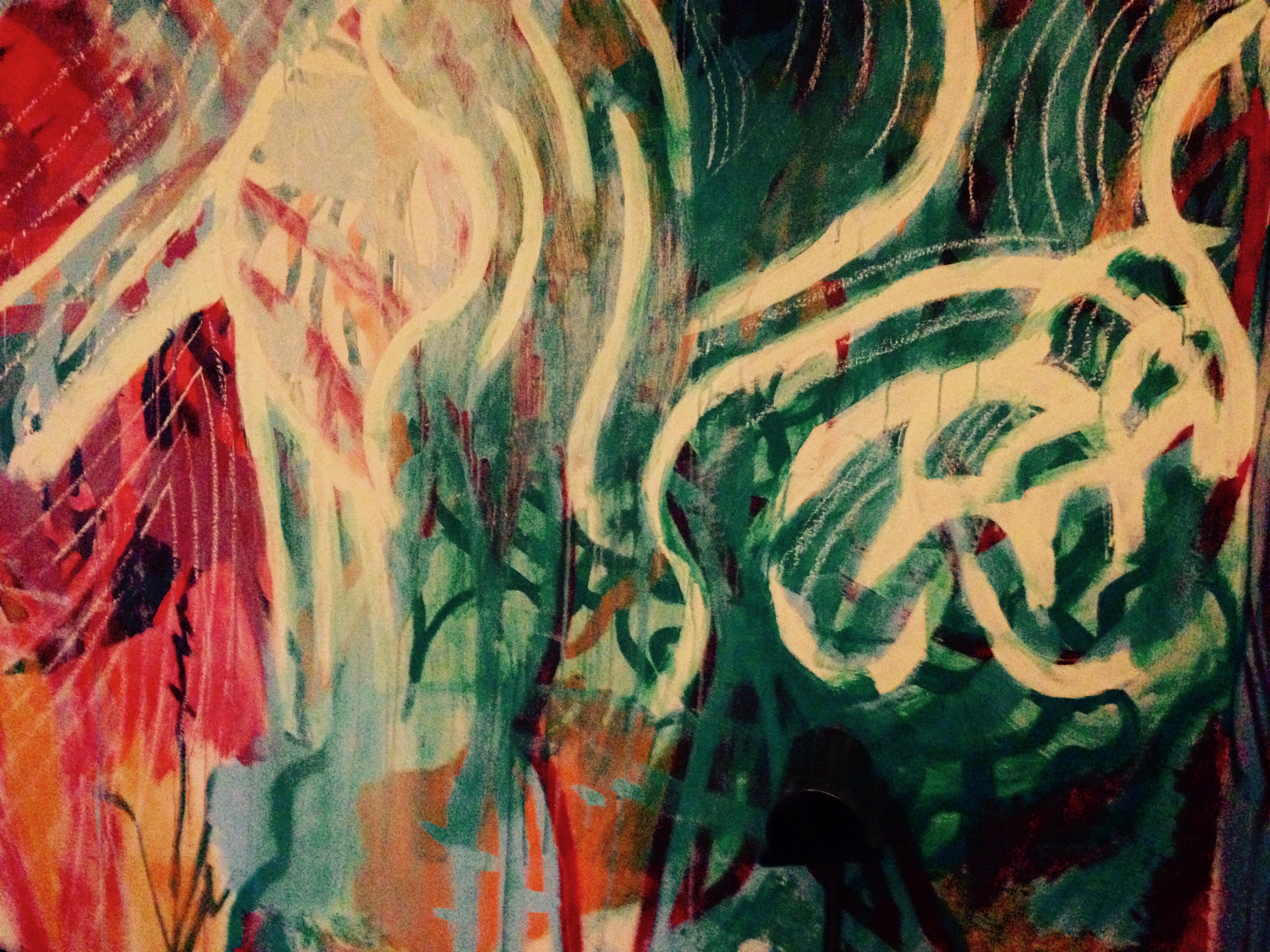 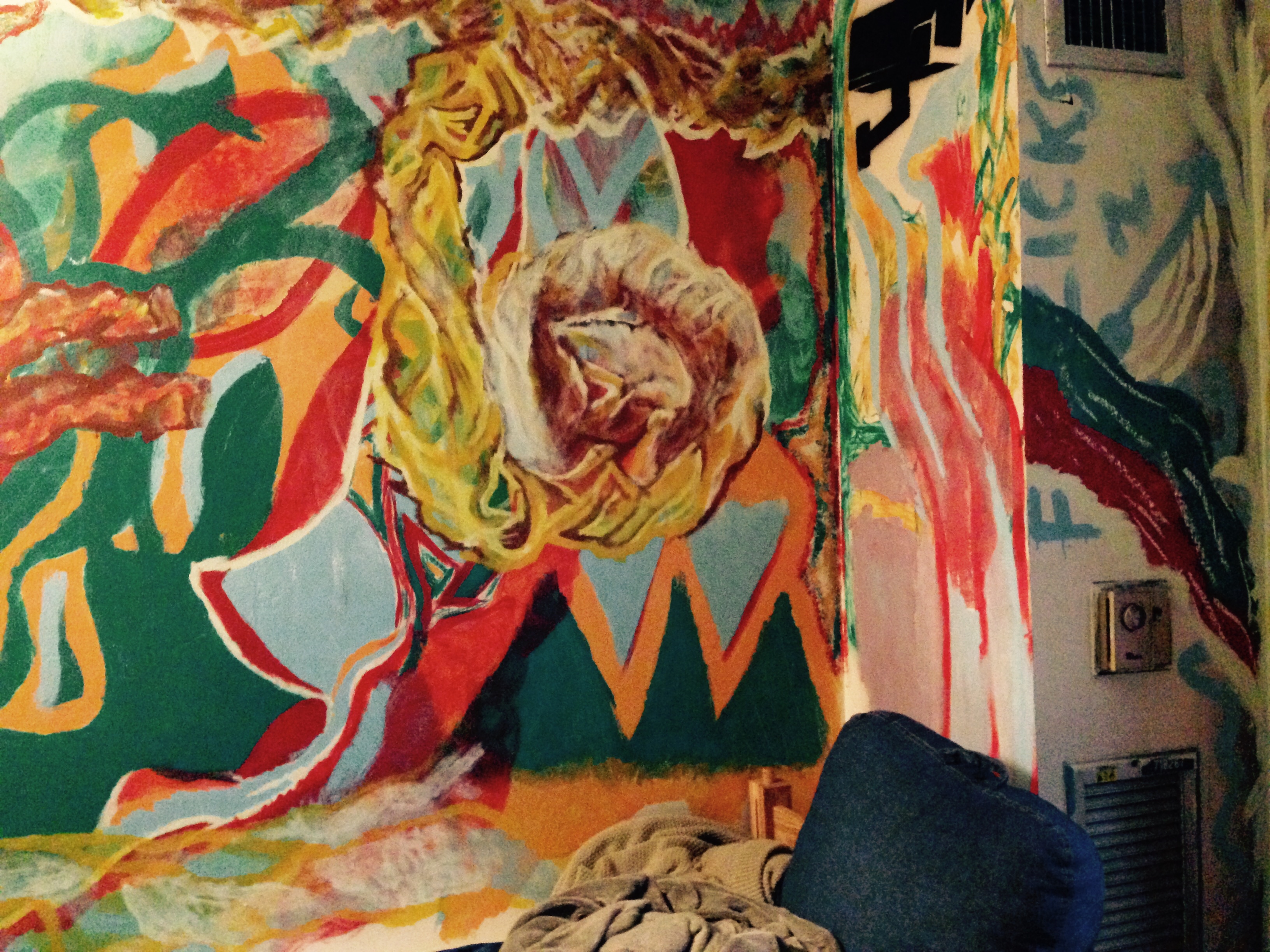 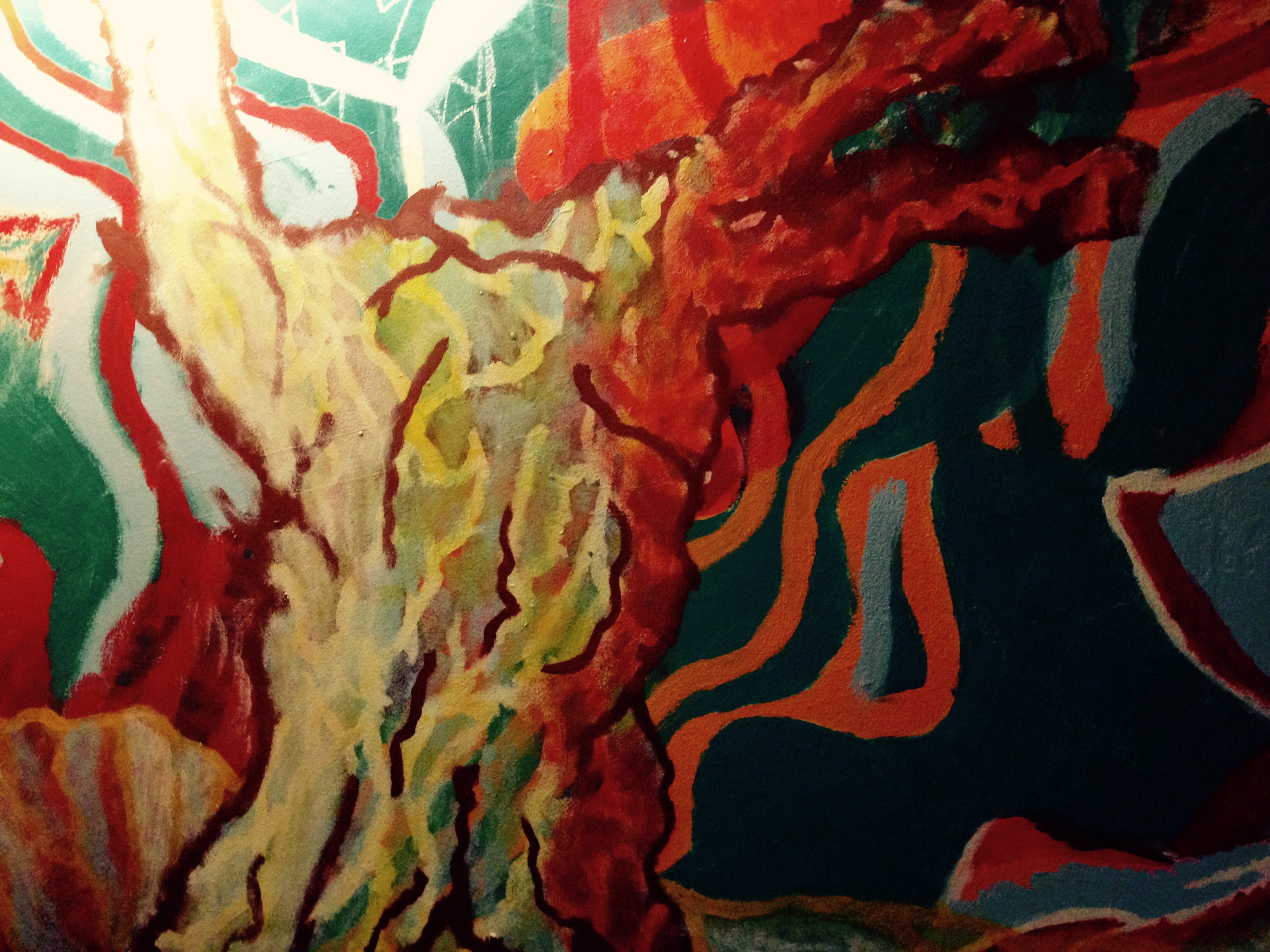 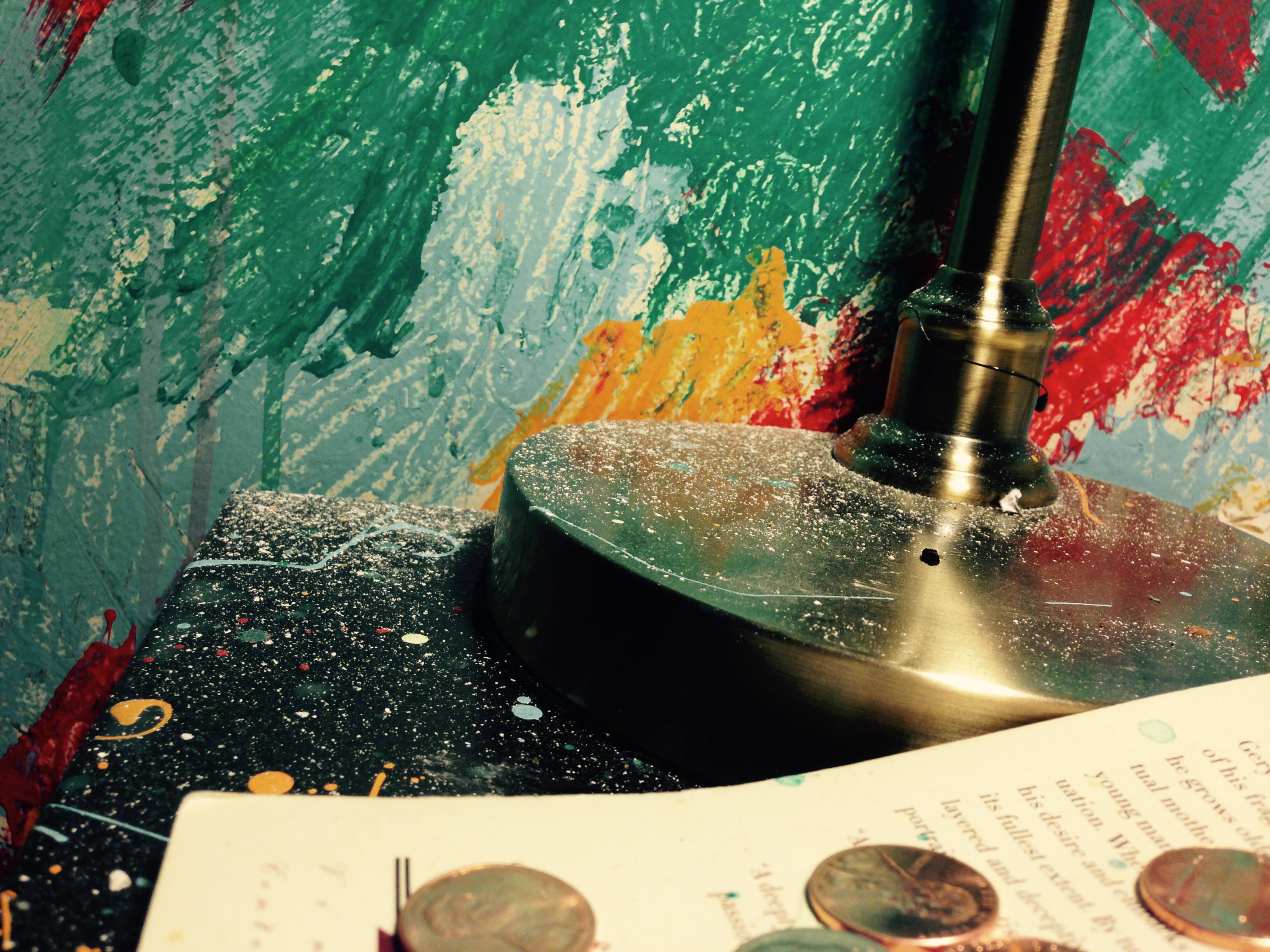 Of course, everyone has their own manifestation of the “do pretty much whatever” principle of room painting. Where Nick uses bright colors and abstract patterns, Holly H. ‘18 two floors down fills her living space with Sharpie, black paint, stylistic doodles and relevant quotes. The result is something that is uniquely her own, both in her style and in the tiny reminders of the things she loves. 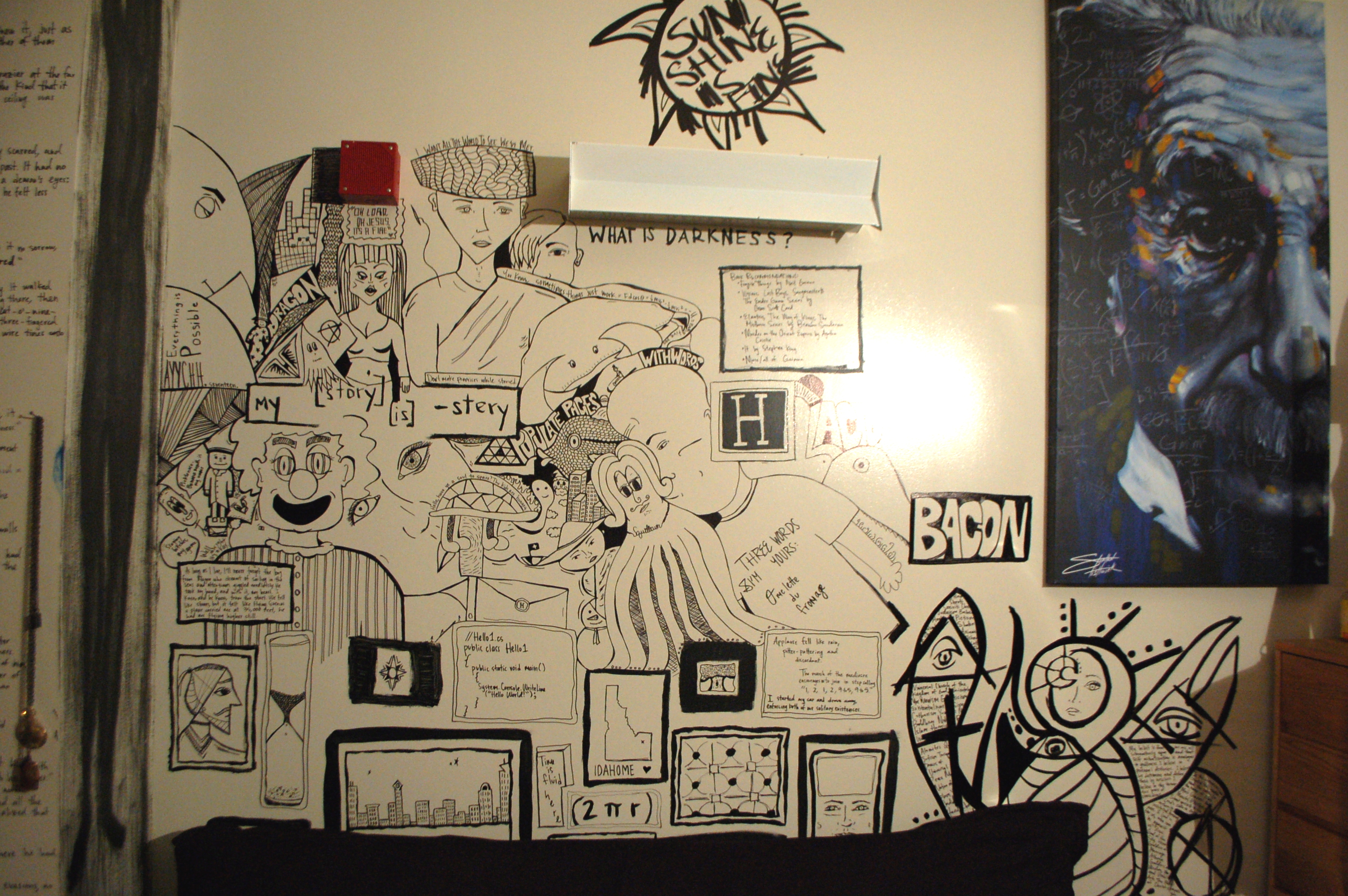 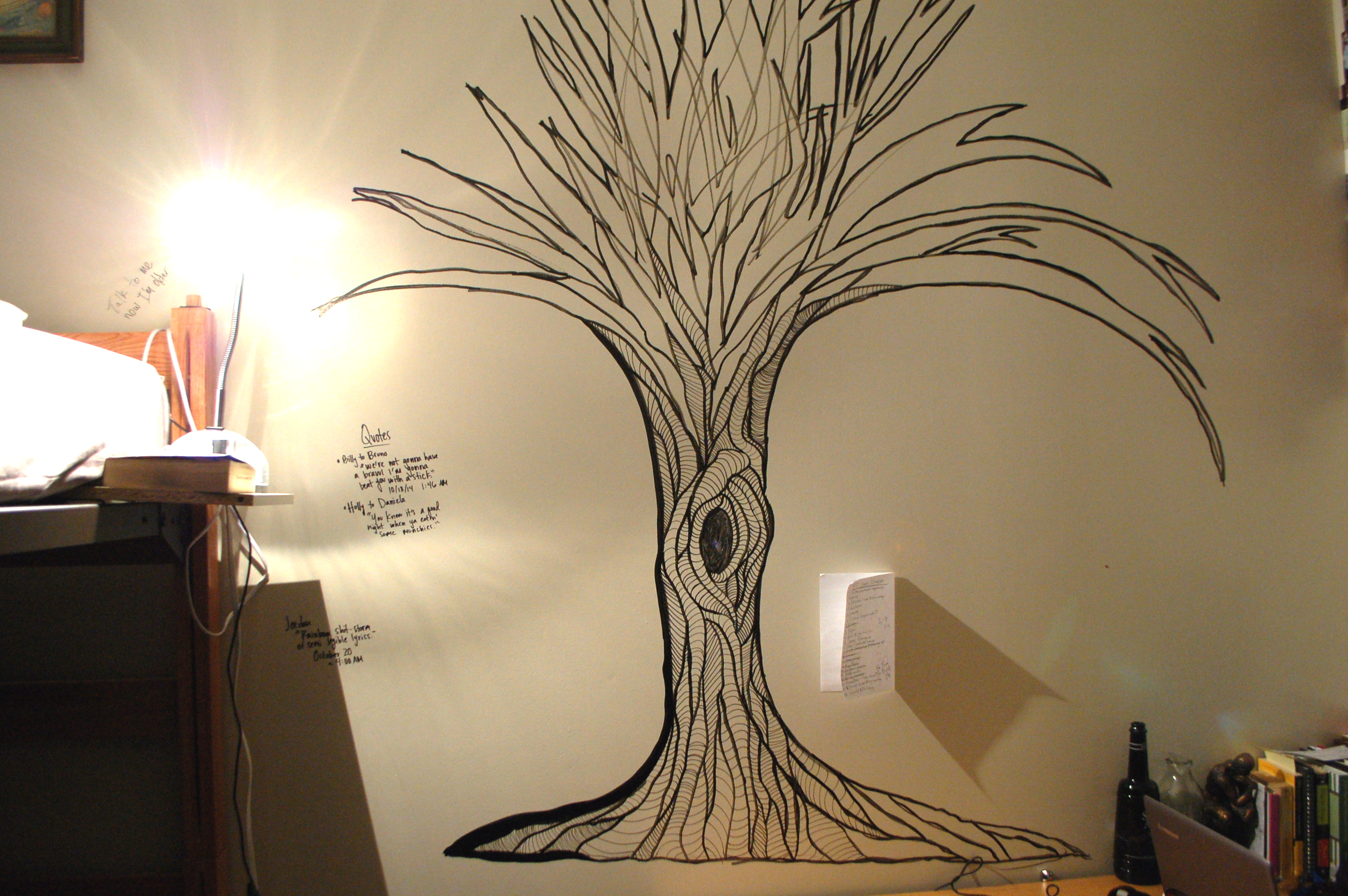 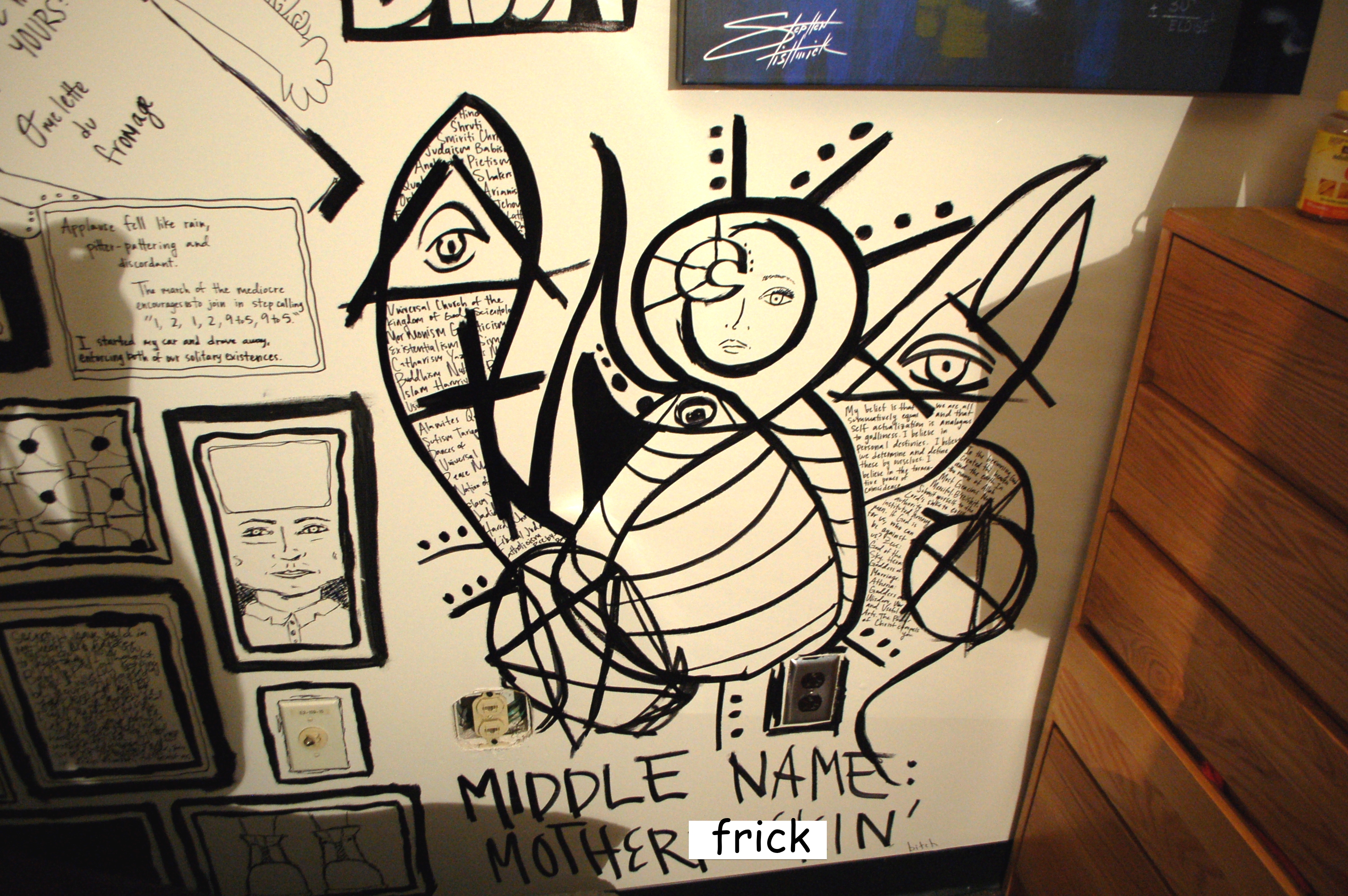 (can we all agree that Holly’s art is amazing tho)

As for me.. well, I guess I’m lazy. Or busy. Or a bit of both, because the fact is that my walls are disappointingly bare. I’m a failure, I know. 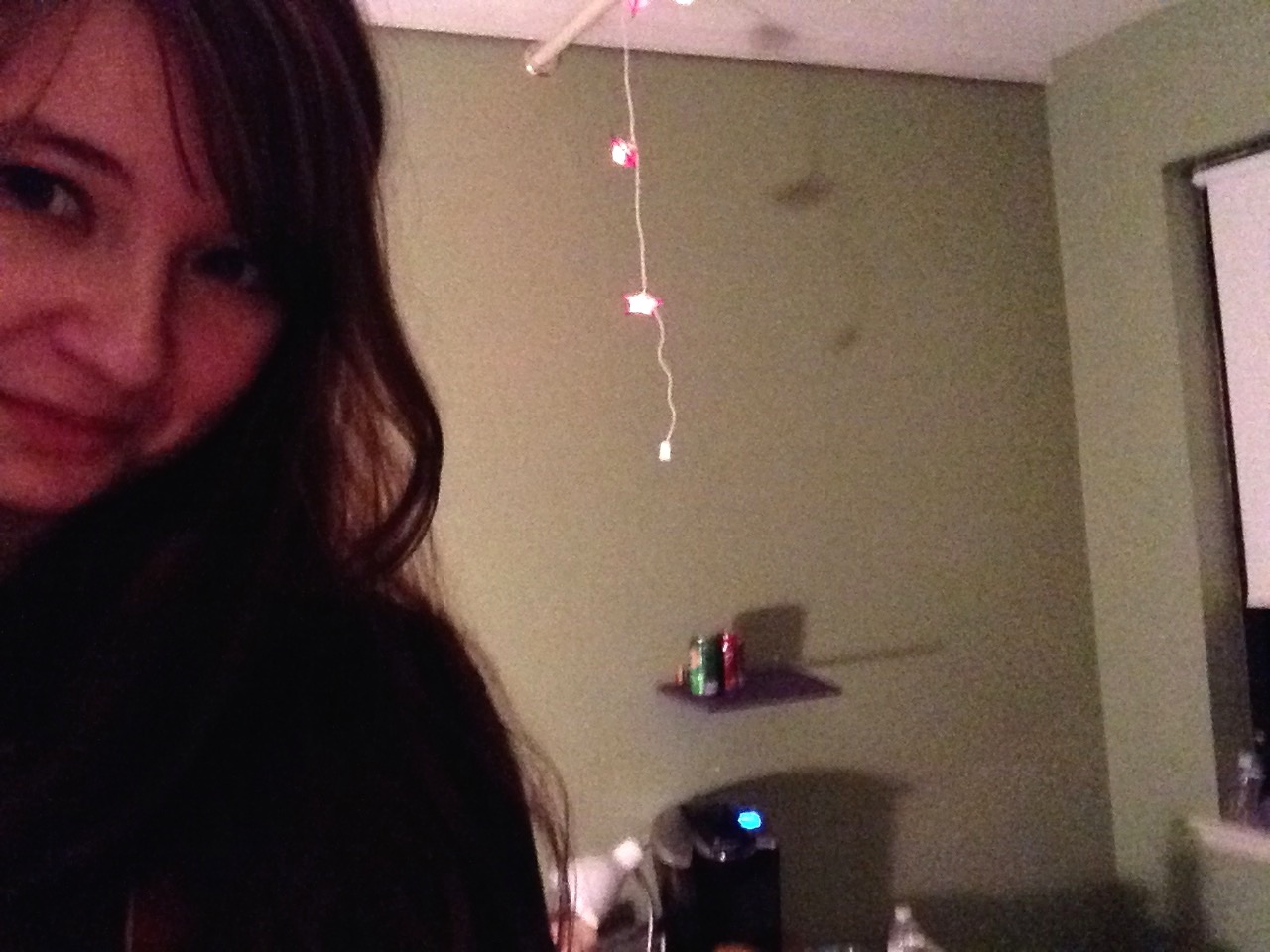 But there’s hope – I just took a trip to buy a LOT of paints, and I’m hoping to start painting something awesome in the next few days. All I need now are ideas about what to paint! If you leave me some in the comments, I’ll see what I can do. :)