Why I Chose To Spend My First Weekend Away From MIT by Afeefah K. '21

132 miles north to be exact

Things pick up pace real quick once the semester starts. At times, it feels like you’re in a hamster ball, surrounded by due dates, responsibilities, meetings, applications. The grind never stops, and it comes at you from every direction. And so you walk all over your workload, checking off one thing after another. Until, they eventually travel a full circle to look right back at you in the eye.

That’s one longwinded way of saying that I’m back and Junior year has started. But along with the insane craziness that is my google calendar when I’m at MIT, I’ve returned with a new found drive to “look at what’s beyond the hamster ball.” And so I found myself really actually relaxing in the mountains of New Hampshire. Now, if you know even the slightest bit of me, you’d know that I really really really am not the type of person that would willingly spend the first weekend of the semester off campus. Rather I’m definitely the type of person that would be spending that weekend color coding my calendars, creating assignment reminders and tackling whatever psets have already been released.

But as you slowly but surely make your transition into being an upperclassmen, you begin to see things with a new perspective and your priorities begin to shift a little. So yes, I spent my first weekend a little bit up north of MIT, and here’s why:

The morning of retreat, my wonderful co-coordinator Sarah A. (’21) and I literally woke up at 6:30 am, while all of campus was sleeping to make our way over to the nearest Restaurant Depot. The store had closed too early the night before and we had’t bought hamburger patties for our BBQ yet. After showing that kind of dedication, you can’t not go to something you’ve spent months planning. So yeah, I kind of had to go. But also, I genuinely wanted to see how all of our hard work would pan out. The Muslim Students’ Association’s Welcome Retreat was our summer baby. And we had to be there to witness it come to life. Here’s a snapshot of what the weekend looked like: 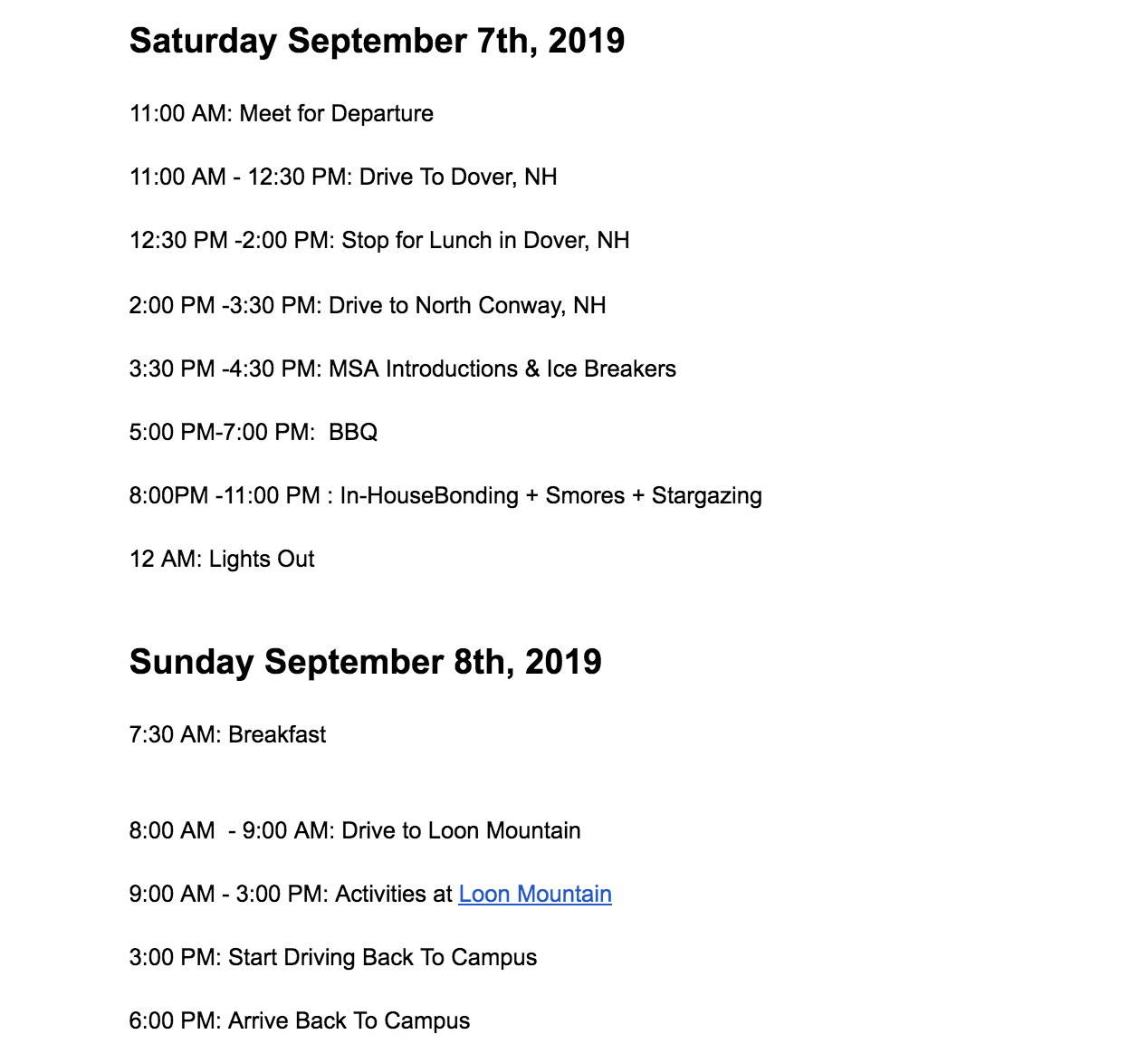 2. Catching Up With Old Friends Is Nice

Group chats and FaceTime calls do not do justice to actually being surrounded by some of your closest friends. And tbh, there’s no better way to catch up with one another than being stuck in 2 hour car rides and finding yourself in an airbnb in the middle of nowhere New Hampshire. You’re kind of forced to be fully engaged in the moment. And even though I thought I new my friends well, there’s always new surprises. 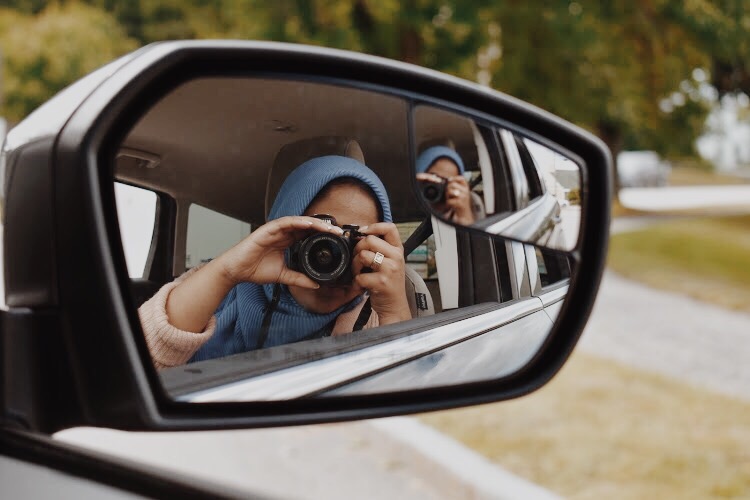 Of the many community-building activities we had planned, we had one in particular that stuck out to most people: “Spinning Yarn.” So the idea here is that someone starts off by holding a ball of yarn. And they began to speak about themselves. Anything they want to say, from a quick recap of their ancestry to stories of sledding down the stata amphiteater. When someone else in the room relates to something they’ve said, the barn of yarn is thrown over to them. It becomes their turn to tell us a little something about themselves or their lives. And so it goes on, until everyone is connected in a web of yarn: a pretty cool visualization of how people from all walks of life can become connected if they step forward: 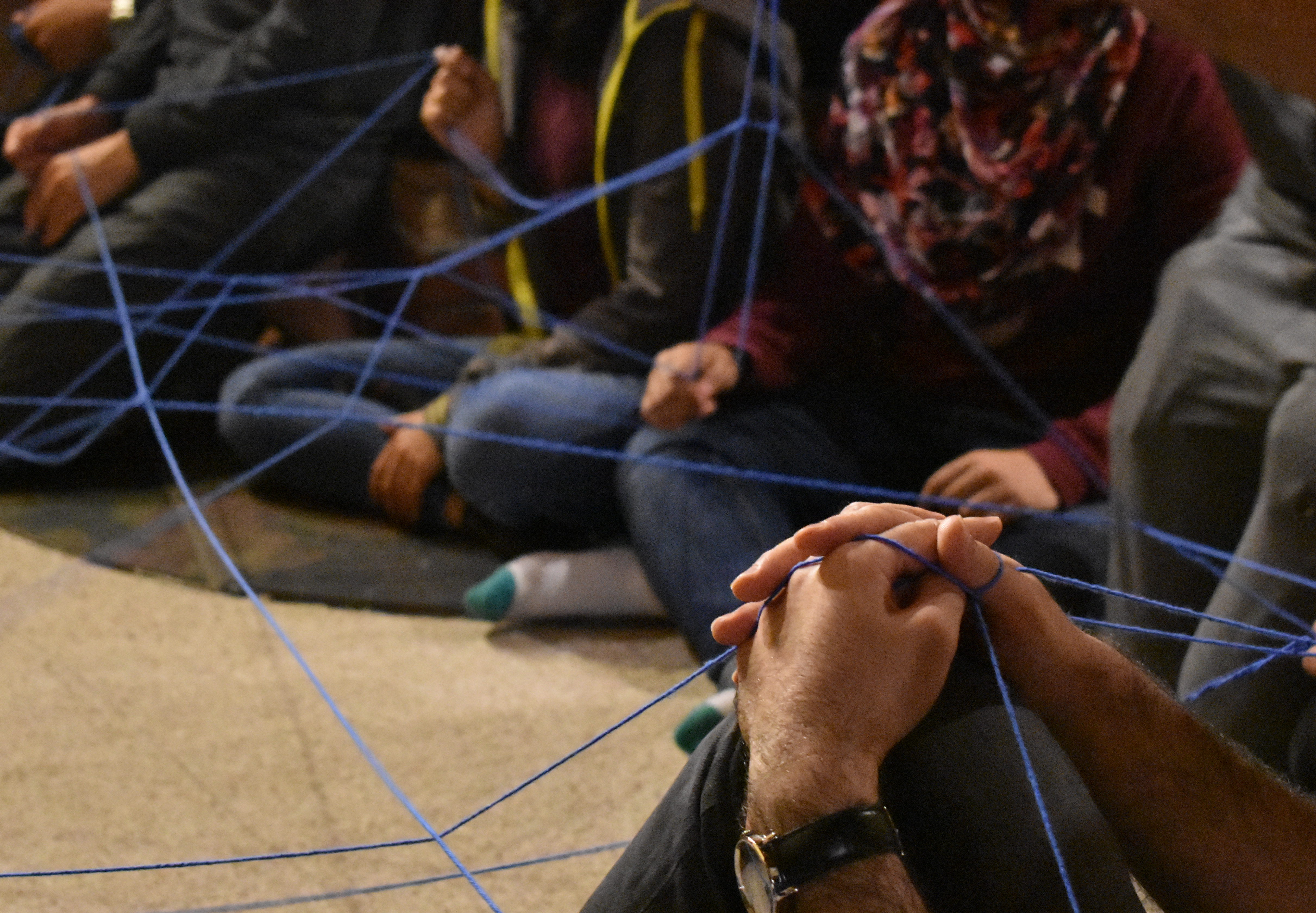 There’s not much to say here other than the fact that I went zip lining for the first time. And for someone who is absolutely terrified of roller coasters and things of the like, asking me to leap above a river with nothing but a harness to keep me from falling is kind of a lot. I might have dramatically screamed as I jumped, but I did it. And yeah, I feel like my bravery level rised just a tad bit. 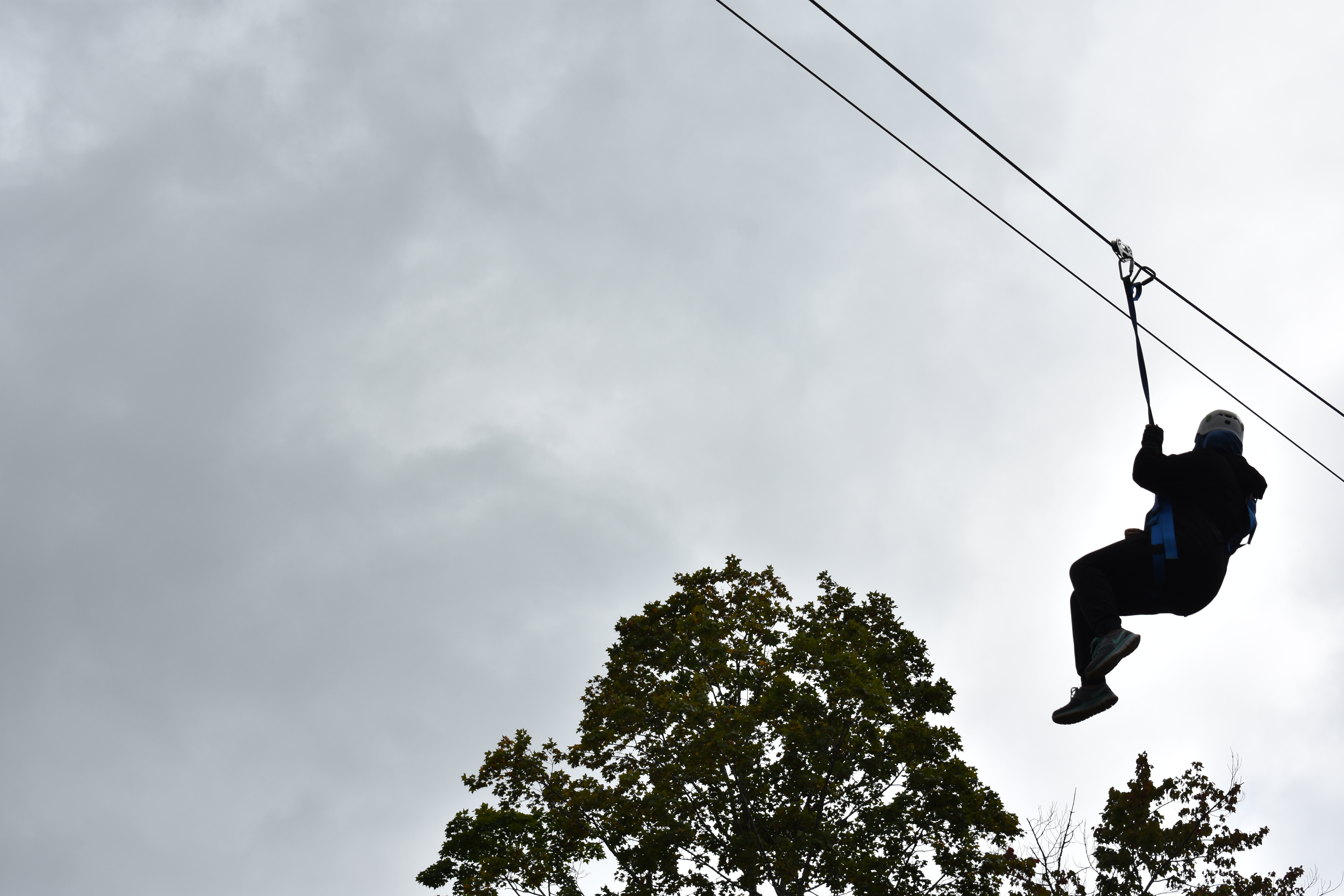 5. Some Peace Is Kind Of Nice

After a long day of zip lining, mountain biking and cave hiking, I found myself sitting in a Gondola on my way back down to the main ground. If there is any one moment that my heart feel so incredibly full in it was that moment. As we slowly descended from the top of Loon Mountain, all four of us that were in the gondola were just so awestruck by the beauty we were surrounded by that we sat in absolute silence, soaking in the surrounding views and giving each other the opportunity to spend some time within ourselves. Rarely do I ever feel comfortable to sit in silence for 15 minutes while being surrounded by others. But the silence came naturally with a feeling of pure peace. 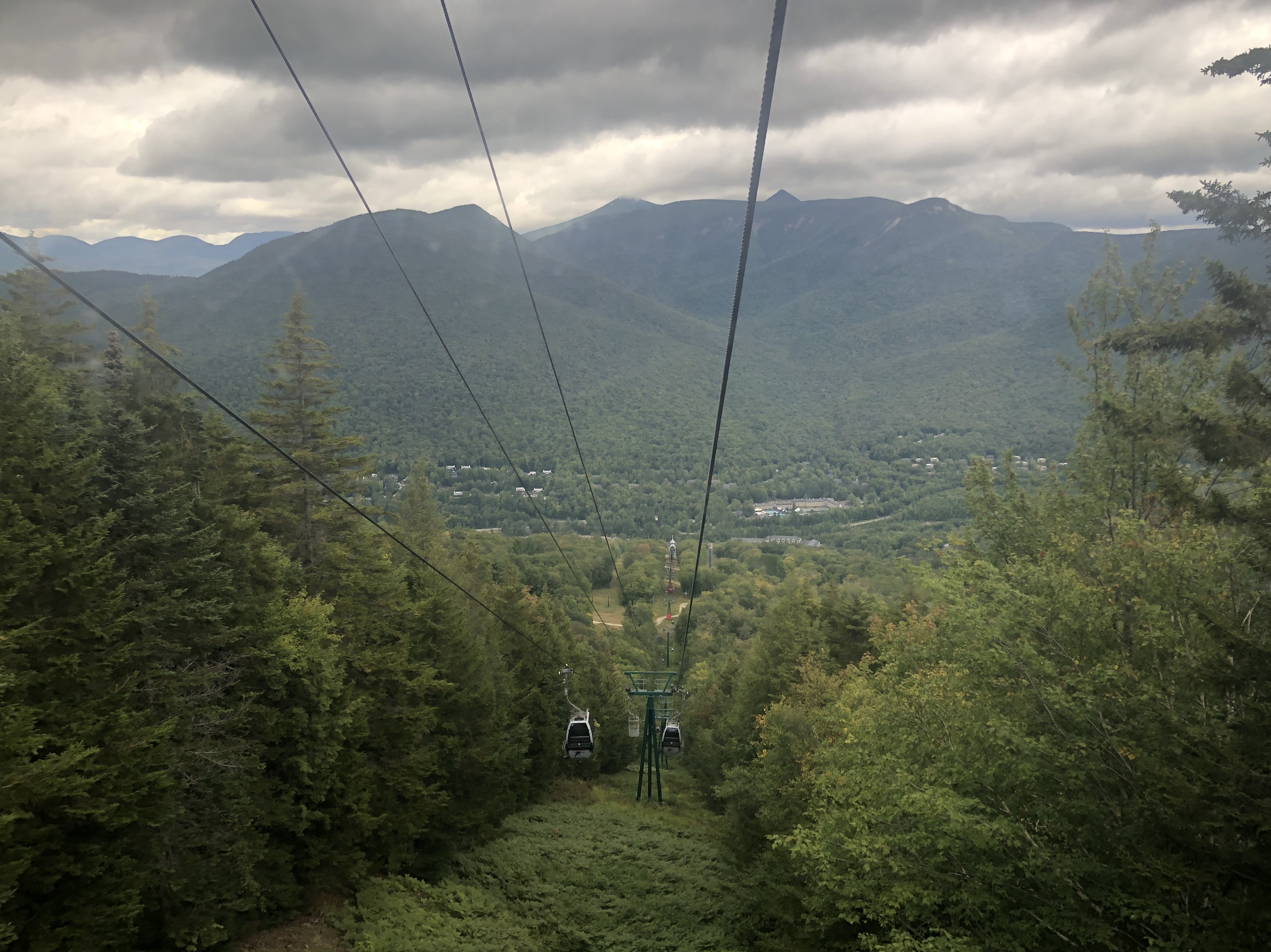 When your surrounded by all kinds of crazy views (or windows screen savers as some would call it), it’s not hard to realize that there is so much outside of the hamster ball. And while the hamster ball most certainly is my day to day reality, and is something that I look forward to exercising in, I’ve realized how important it is to take a break, take a look outside, and maybe even occasionally go on a little adventure. Distance is good because it is a catalyst for reflection. And I can confidently say that my weekend away has not only fostered a better sense of connection with one of my key communities, but it’s also giving me a whole lot of beautiful photos to look back at and reminisce about.  But most importantly, those hamster legs of mine feel well rested and ready to tackle my next 3-month marathon. 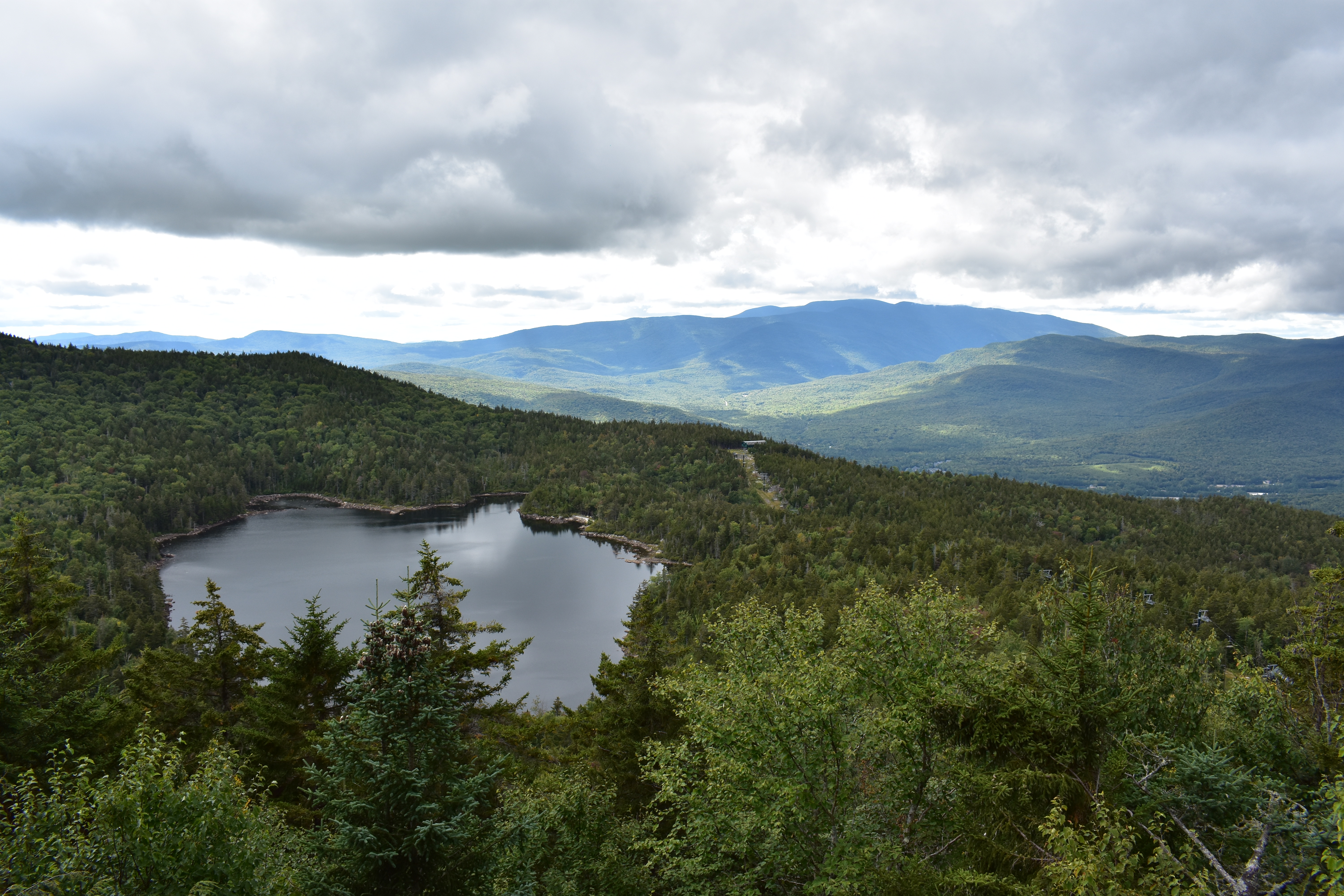