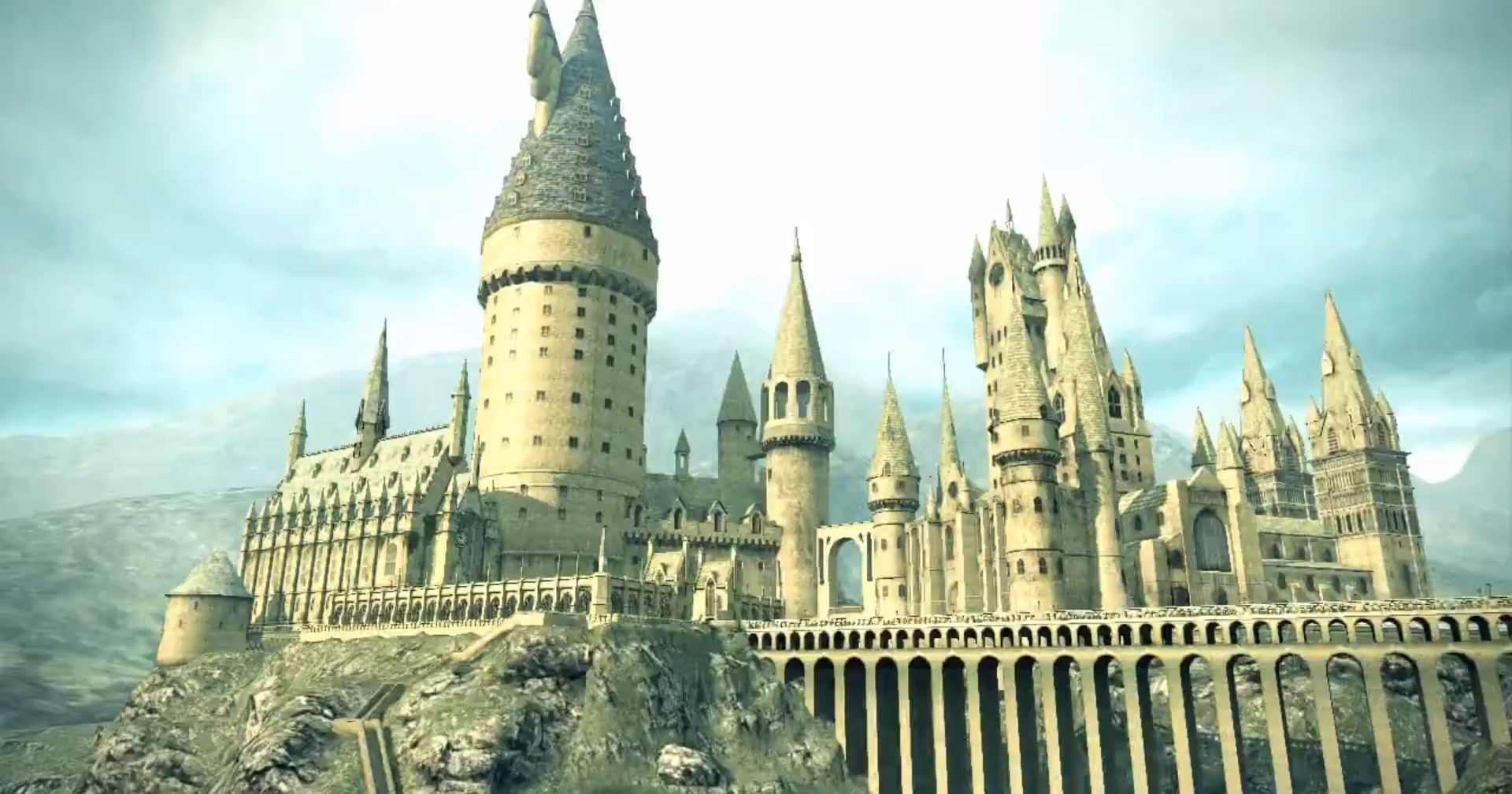 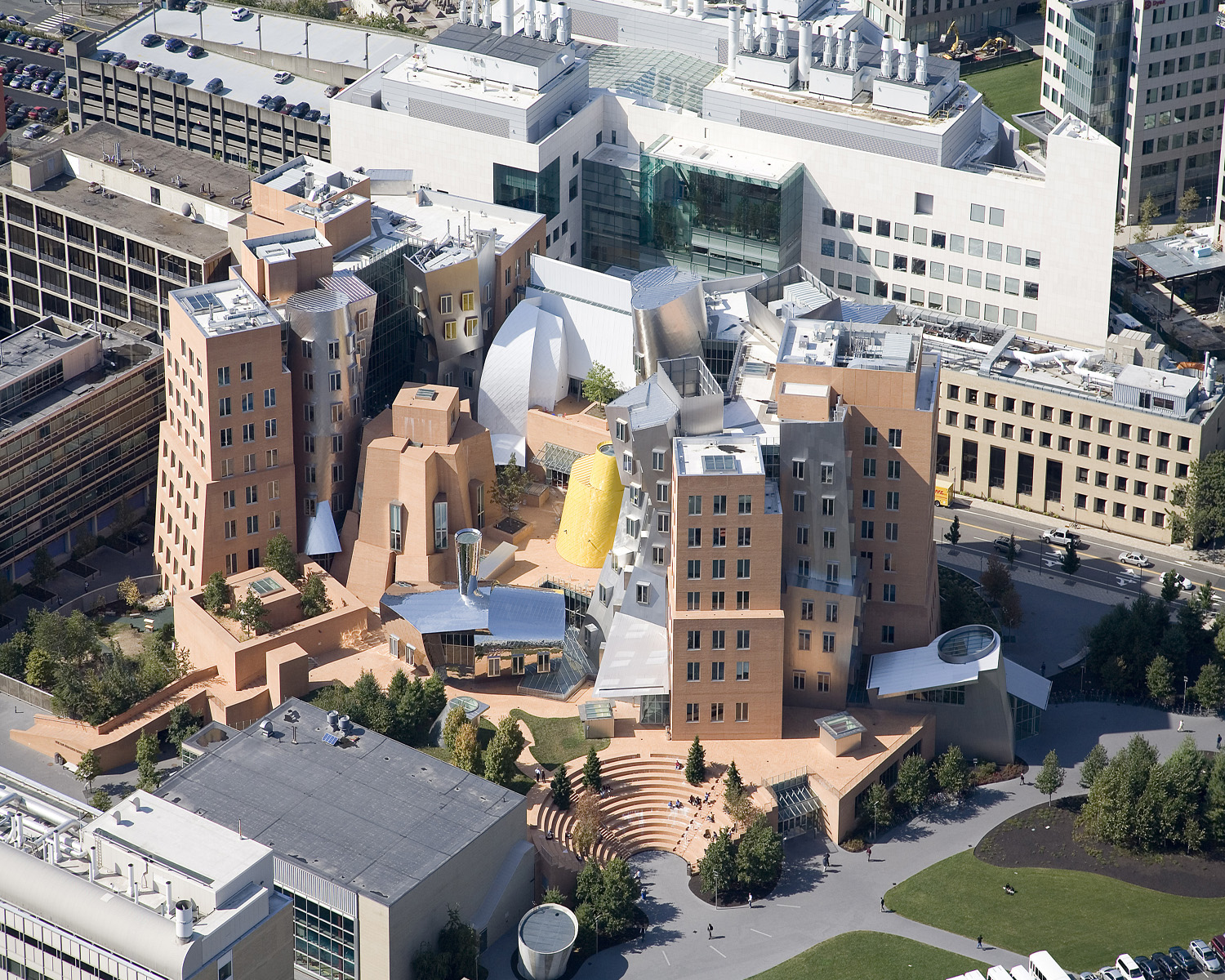 It’s been a year since I came to MIT, slightly over a year since I started blogging. A year since robots in the FPOP and the free-food tornado of Orientation and the pre-psets era. A year since every building gleamed with newness and strangeness and since I was convinced that MIT was just too big and I’d never get the hang of it. A year since I left my home country on what has felt like the bumpiest adventure ever. Except instead of “Expelliarmus!” and evil noseless freaks screaming “Avada Kedavra!” there’s p-sets and a weather intent on killing me. Close enough.

What’s the biggest change since becoming a sophomore? Oh, that’s easy. The answer: my e-mail. I’m not even kidding. That’s the highlight of my sophomore year. My e-mail has taken a life of its own and grown tentacles and a large eye and several mouths and gone absolutely crazy. 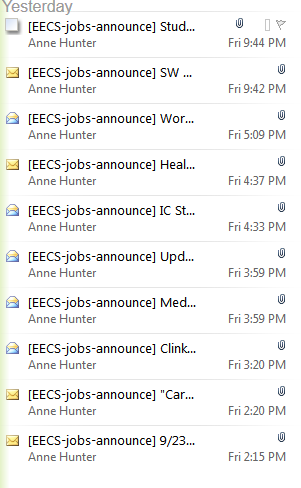 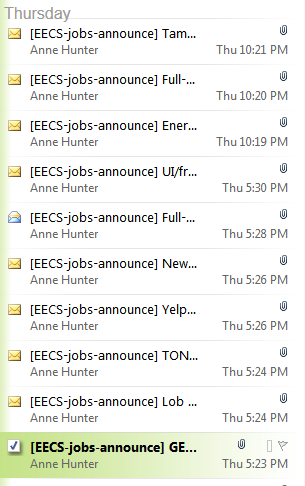 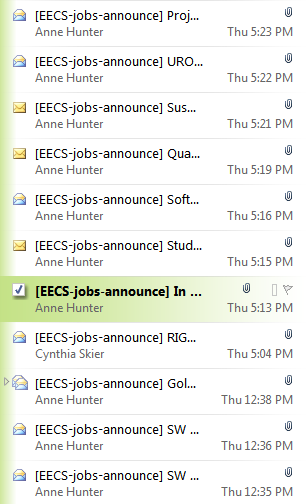 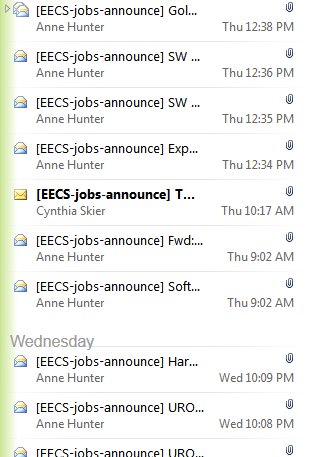 Crazy, right? I get tons of e-mails with the header “eecs-jobs”, all of them usually announcing an available UROP or a company seeking applicants for EECS positions or something along that line. Dozens of them every day. Literally dozens of opportunities for you to explore new research or get a job, delivered right to your e-mail!

A lot of the jobs do happen to require experience I’m still stacking up on, which is a chance for me to babble about one of the most engaging classes I’m taking this semester: 6.01: Introduction to EECS. It’s a challenging hands-on class quite unlike any I’ve taken thus far. I spend four-and-half hours every week in the lab (7-8:30 P.M. on Tuesdays, 7-10 P.M. on Thursdays), working alone or with a partner to model systems that simulate and control an actual robot. We use these bulky red wheeled robot creatures made of motors and lego blocks and a ton of circuits, hook them up to the lab computers and have them do the bidding of our software.

One particularly interesting thing the class gets you to really absorb is how differently real-life situations unfold compared to the seamless electronic predictions. For instance, with a proportional controller, we can utilize the robot’s sensors to dictate how far or close from a wall it should always be (its sensors use sound pulses and echoes to detect the wall distance). Say we fix the desired distance to 0.5 meters. Then, if the code is written correctly, if you put a wall 0.6 meters in front of the robot, it will move 0.1 meter forward. Analogously, it will move 0.1 meter backward if placed 0.4 meters away from the wall.

Now, in the lab, we played around with the “gain” or proportion of the proportional controller. For certain gains, the robot simulation on the desktop shows the robot rapidly oscillating back-and-forth. But when we tried out the code on the actual robots, they indignantly differed from the predictions, as if offended by our blatant stereotyping of them and made weird forward-backward motions too clunky to represent the sort of rapid forward-backward motion we expected.

Which sort of made sense, because the plot of the robot’s motion on the computer (distance over time) would show a series of sharp rises and falls. From this, we would expect the velocity to be disjointed straight lines on the plot, positive for a while and then immediately negative for a while and then immediately positive. But a heavy physical system can’t simulate that sort of motion.

And this was all just in the first week! There have been two more weeks, with the labs getting more difficult and much more intricate. But it’s also an exciting class. There’s a lot of room left to you for implementation. You choose how to write the code that does what we need the robot to do. You choose how to interpret it. Everything just needs to fit a logical framework, but outside of that, there are so many choices to be made, and while there are instructors and lab assistants to guide you, you (and your partner) end up making most of the decisions, and potentially dealing with the dire consequences. Like I said, fun class.

Speaking of classes, I’m taking my first ever official creative writing class this semester—Reading and Writing Short Stories with Helen Lee, an amazing professor. This is a class I’m particularly glad to get because I tried taking it freshman spring, but there was just too much interest, and I lucked out in the lottery process.

Often times, you’ll hear people talking about the simple power of e-mails, and I’m inclined to agree. Last semester, I sent an e-mail to Helen Lee saying I didn’t get into the class although I wanted to. I explained that I really loved writing, and that a spot in the class would mean a lot. She wrote back rather quickly, assuring me that she would save me a spot next semester. And she did! The class was also very over-enrolled this semester, but by simply reaching out and talking, I’d secured a spot.

Sophomore year has been a lot about reaching out. My classes are more involved than they were last year, so I have to grope at people for help (get your mind out of the gutter), use office hours more often. It actually makes for a nice experience when you realize just how much the Institute supports your endeavors. It’s a supreme amount, with all kinds of help existing at every door. The office hours and the teaching assistants and student groups and free tutorials. Guys, MIT rocks.

There’s also been a more involved kind of reaching out, which I did a lot of this week, which I guess makes sense since it was MIT’s Career Fair Week. Companies swarmed campus. For a lot of people, it was an opportunity to assure themselves a year-long supply of clothes via the following basic algorithm:

ii) Iterate through the other companies, grabbing a free shirt from each of them. Same complexity as step i) and thus same complexity overall. And if you come up to me mentioning that this algorithm forgot to account for the nontrivial time steps between moving from a booth to another, I’ll either clock you in the jaw or tickle you till you’re in hysterical, clucking tears. Or more likely feature you in a grim story with lots of hooks and lots of red-eyed shadows.

Now, for a lot of others, it was a great way to find internships and full-time jobs. I was able to work on my resume—of course, MIT’s Career Development Office looked it over beforehand and told me ways I could improve it—and apply to eight companies that made an impression on me during the fair. Fingers crossed while I wait on them, but I definitely got the sense that this year is pushing me closer to the real world, to the starkest sense of being an independent individual in a global village, far more than the previous years of life have.

Which of course brings me to the topic of growing up, because I turned eighteen less than a month ago! I can’t believe I’m eighteen, although it apparently doesn’t mean much. When I asked one of my friends what I could do in the US now that I was eighteen, his response was: “Well, now you can join the army and can be arrested and legally tried in court as an adult.” Whoopee!

I don’t have much to say about being eighteen really. For me, it was just a day that came and went, but I definitely understand that I’m nearing that point of adulthood adults seem to talk about with vague and austere mysticism. I did get three wonderful birthday gifts.

First, I got the chance to speak with my entire family over Skype. When I came to the US a year ago, I was instantly plagued by bouts of longing and home sickness, but the feeling more or less petered out as I got into the demands of the Institute. But then I went back to Nigeria for the summer, and for the first time in a year, the entire family was back together. We even traveled together to the United Arab Emirates for a couple of days, where we bonded over the heat and how amazing Dubai is and just that comforting sense of being together. So it was a bit hard letting go of all that again when I returned to the US (I was moody throughout the plane ride, which from Nigeria to US totaled 22 hours).

The Skype conversation itself was quite dramatic. Network was terrible on the other end, so I had to do a lot of screaming to be heard and so did they, and thus on the surface, it’s just me screaming at my family, and everyone else screaming back at me. But of course, it was nice, ending with a fairly immature bout of who could say “I miss you” the most. With my, “I miss you I miss you I miss you” chant shrieked a hundred times, I think I won.

The second gift was from my former roommate James Deng (I have a pseudo-single now #upgrade #yesIjustusedahashtag). He left me a birthday card. Inside it was a 25-dollar AMC gift card and sixteen pictures that chronicled our first-year adventures. Needless to say, the pictures reduced me to a weepy, emotional bawling thing and I compressed him into a hug.

The third gift was from Dori, one of the greatest friends I’ve made in MIT this semester. Before she and I actually spoke for the first time, we had lots of moments where I’d be heading to my room and she’d be heading to hers or I’d be heading outside and she’d be heading to the basement and we’d cross each other like four or five times, all in the period of an hour. Finally, when I went down to laundry later in the day, there she was and we just ended up laughing about how ridiculous the whole thing was. Then we ended up talking for the better part of an hour. It was one of those instant, easy connections, and I’m grateful for her friendship. Which I guess I should be, because for my birthday, she baked me an entire cheesecake! 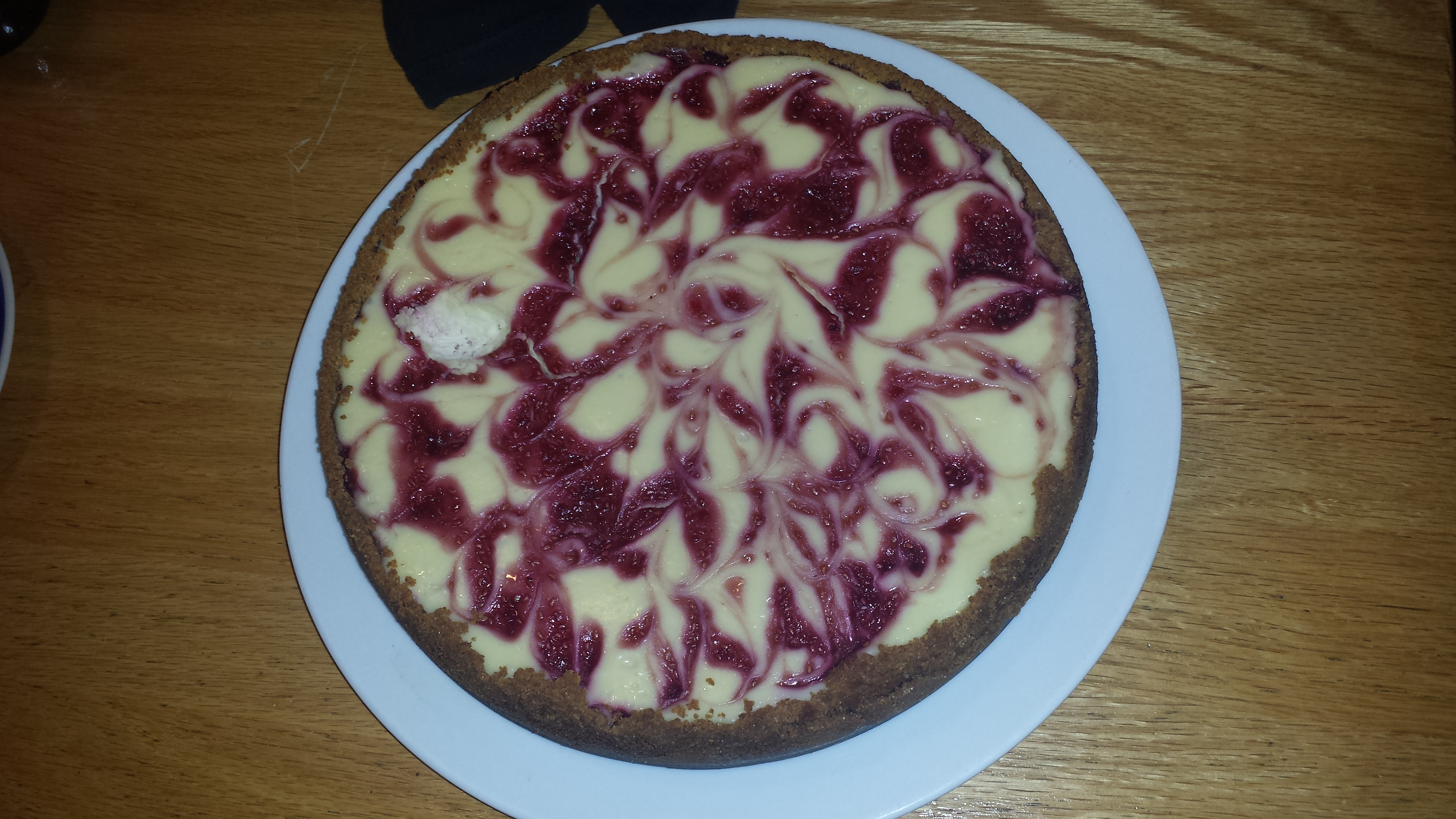 All that, just for me. It was hands-down the best cheesecake I’ve ever tasted. Of course, I didn’t eat all of it alone. Though I think I certainly could have, except I’m sure there’s some alchemic, Santa-Claus-creating power in the cake.

But that’s fine, because I could shake off any extra calories (delusion of the century), and yes, that’s a reference to Taylor Swift’s catchy new song, “Shake It Off”, which is from her upcoming album, “1989”, which comes out in a month and seven days and 48.392 seconds. Not that I’m counting. It’s her first full pop album, which was a lot of news for me, because I’ve always loved the country elements of her songs. But she’s Taylor Swift, essential goddess and my laptop’s desktop background picture, and I’m excited to hear her new songs, because I know they’ll have her heart regardless of the genre.

And besides, I’m starting to think that’s what sophomore year is all about—following changes, making changes, wherever they take you.