How to prepare--or at least, how I did.

It’s that time of year again. I remember it well.

I intended to write this post before AP exams hit, but I just checked the CollegeBoard schedule and realized that unfortunately you’re all almost done with AP exams. However, the following are mostly general study tips that could be applied to pretty much anything, so if you’re still doing some last-minute cramming for that week of IB exams, SAT Subject tests, the June SAT (is that still a thing?) or your school is like my high school and has finals the last week of May, then I hope this will be helpful!

I myself am pretty stressed out too, but I have always used blagging as a study break anyway (this job is so convenient!). I decided to create this post as a practical guide to preparing (or at least a guide to how I prepare) in the hope that it might help some of you. Writing down my own strategies is nice, because it reminds me that I have strategies, and makes me feel less like I’ve been thrown into a pit of tigers to fend for myself with a toothpick. When I feel really overwhelmed, creating some kind of plan, whether I actually follow it or not, at least allows me to calm down and start doing something.

I recently received this tumblr question about the SAT, which partly inspired this post. Let me tell you, I am your go to gal for SAT tests, they are my forte in the world of arbitrary national assessments.

The first SAT test I took was in 7th grade–I don’t really remember why, but I took it. In high school, I took four practice exams (four horrible Saturdays during which I gave up four hours of my life I’ll never get back) as part of a one month prep course through my school, and my mother and I spent even more hours on even more Saturdays in Panera Bread, going over all the mistakes I made. I took two actual SAT exams, and I took four SAT Subject Tests–Bio, Chem, Math I and Math II. I prepared for the last three of those in just two hellish weeks of cramming because we all forgot MIT required both a math and science. It was my last chance before early applications to get my best possible score on each, so I took as many as I could at once.

So, yeah, I know my stuff, y’all–at least until 2016, when the entire format changes and you will all have no use for me.*

I always used Princeton Review for SAT prep, and also for AP Exam prep. Barron’s Test Prep is the most thorough for really any test–but if you’re in a time crunch, it’s difficult to glean out the important stuff. If you have time, go with Barron’s and use it for at least a month prior to the test if you really want to prepare well for a standardized test on your own–this worked well for many people. If you want to prepare for subject tests and APs, I still think Princeton Review is really, really nice, particularly if you’ve already taken the class (which, I hope you have. If not, you could try Barron’s, but I really think it’s best to take all your subject tests/APs in the classes you’ve taken, if at all possible).
The two weeks I spent cramming for subject tests were with Princeton review books. I worked through both the Chemistry prep book and the Math II prep book, from start to finish, on top of my regular homework. It was pretty awful, and I wouldn’t suggest it; take tests as early as you can!

But since I was in such a time crunch, I printed out these little empty thermometers:

I pasted one each to the front of each prep book, labeled all the little lines with the chapter numbers, and each time I completed a chapter I filled it in until I was done. I did one math, one chemistry chapter each, about three each a night. I sometimes doubled up on math, I think, because it had more chapters.

That was crazy. Still don’t know how I did it.

I highly recommend these silly thermometers. Watching it fill up is just really motivating somehow! You can use it a little more slowly and carefully if you use Barron’s test prep, or simply if you have more time.
I would also highly suggest taking a practice SAT test like it were the real thing–sit down for four hours, do it, take all the allotted breaks, score yourself. If you can’t do that by yourself, look around your school or local community for free practice test/test prep resources. Ask a teacher or a guidance counselor–maybe one of them would simply be willing to help you, even if there’s no formal resource available, and they will definitely at least try to link you to something. While you definitely don’t need to take a prep class, if you’re willing/can afford it, consider it. I did–it was fairly cheap since it was through my school, and it did help. Mainly, it helped because it offered four proctored SAT practice exams that were as close to the real thing as possible. But actually, I think what helped the most was my mother–who, every weekend, would go over what I did in the prep class with me and the previous practice exams, and we would talk through all the stuff I did wrong. We used to sit in Panera Bread for hours and hours, constantly getting tea refills….

SAT scores (currently) max out at 2400. A close friend of mine (who is now at Dartmouth) got a 2350 using nothing but time, a practice test book from the library, and her own incredible study skills. In other words, she didn’t pay a penny and did better than all of us, and probably better than whoever paid thousands of dollars for test prep.

Make sure that you know about the subject tests your potential colleges need and take them as soon as possible. Start thinking about this sophomore year. Forgetting about those and not taking them until the last minute can be really stressful. I’d suggest taking subject tests as soon as you can after the relevant class.***

This post is already too long, but here’s a quick word on final exams:

Studying for finals is different than studying for standardized exams. Even in high school, I felt that it was less about a “game” or about learning how to take a test with our actual school’s exams. This time, it’s important to actually know the material. This is easier and harder, depending on who you are, but either way, it involves a lot of time reviewing concepts and doing practice problems.

Planning is key–or at least, it is for me. I make plans and strategies for each exam or class that I have.

I’m a huge believer in productive procrastination. Sometimes, your brain is fried–but you know that if you start an episode of Game of Thrones, you’ll end up watching the whole season and get nothing done. If you really feel like you just have to not think about school for a minute, then clean your room, exercise, read something short. My solution (as you all know) is always to blag. Avoid junk food, TV and the internet (it’s actually the first one that’s the hardest for me…stress eating, ugh).

Otherwise, if you’re not completely burnt out, doing some passive studying (watching videos, reading things, listening to things) can give your brain a nice break from problem solving or quizzing yourself. I put passive studying at the start, middle, and end of all my study periods–it’s a nice way to get started, take a break, and finish up.

Crash Course on YouTube saved my life in AP Biology–I even watched a couple of their videos this year for 7.013 (Human Biology). The details were sometimes a little sparse, but especially in high school there were times it actually helped clarify concepts and gave me a better big-picture view of the topic in addition to being a productive break. Khan academy videos are also good at doing the same thing for a wider range of topics.

I also really liked studying with my friends. Yes, sometimes it’s less productive than if you were studying by yourself, but other times, I feel so tired of working that by myself I’d probably just be staring at a wall anyway. Being with my friends helped us all motivate each other, and just being around each other was always more pleasant. We would quiz each other, ask questions, create study sheets together and share resources. This was particularly pivotal in AP Chemistry, when, towards the end, I was almost ready to give up–but meeting up in the school library with my friends kept me going. 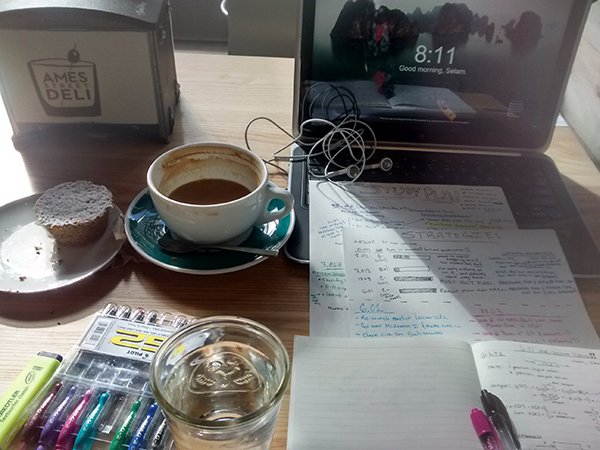 (^shoutout to Ames Street Deli, a cafe in Kendall Square where I have worked long hours and they have yet to kick me out on perfectly reasonable grounds.)

In all the craziness of MIT, I had actually almost forgotten the incredible amount of work it took for me to get here. I put in so, so much more time into high school than the bare minimum. I gave up weeks of free time to be the best student I possibly could, and I still messed up a lot, often being really emotionally and mentally distraught over it. I know my last few posts have been largely about the difficulty of MIT, but to all you high school students who work hard: don’t let anyone ever tell you that what you’re doing right now isn’t difficult either.

Don’t let anyone ever try to dismiss your struggle as “not the real world” or the typical “oh, how sad, that’s just life”. You all work your butts off, and even if it’s not quite the same challenge as college or challenges of the working world, it is still very real, very difficult, very draining, and very time consuming. In many ways, certain aspects of high school are definitely worse than college and the working world.

I hate it when people dismiss the struggles of people at a different stage than they are, and I think it’s often because they just forget what it was like when they were there. You are all fighters–and it doesn’t matter what college you get into, because, if you’re here reading this post on studying strategies and freaking out over your next test, it’s simply true. I still remember what the pressure of high school was like, and I hope that I never forget my past difficulties in the face of future ones–or even future successes. I promise to never belittle someone who feels they are struggling, whether I think they are or not, the way some people belittled me.

Ignore those people. You will go far, as far as you dare to run.

*Even though the SAT is changing in 2016, I still think these tips are very general and mostly still applicable to any standardized exam.

**(e.g, take the Chemistry Subject Test once you finish chemistry class, take Math II after pre-calculus or calclulus, etc.) If you won’t reach calculus in high school, take Math I or take a look at what Math II covers and consider taking it. There’s usually only one integral problem on it anyway, if that. This may all change in 2016, I don’t know if the changes affect subject tests or not.