Young Guru & the Metropolitan Opera by Natasha B. '16

The Arts at MIT

On an extra-long Wednesday a week ago, when spring break has come and gone and the temperature’s still in the thirties, and the wet gray concrete buildings as you walk from MIT Medical where you’ve just had blood drawn match the wet gray sky, you can think about the work you have to do, and it can all feel artless. But then you might look to your left, and see some glamorous woman in a beautiful coat leaving the List Visual Arts Center, and read the sign for an upcoming exhibition, and vow to one day soon get your art on again.

(Maybe when you graduate, the cynic in your head suggests.) Or maybe sooner.

I’m never short on inspiration here, only short on time. Sometimes the energy of inspiration is enough to make time. The rest I’m hoping I can store away for future use and unpack later (in some imaginary future wherein I have ample unstructured time in which to draw on unexpired inspiration). There are incredible artists here, among students and faculty. And there are incredible resources. Classes and grants and studios and teachers. There’s the Arts Scholars Program. Every spring we go to New York City. 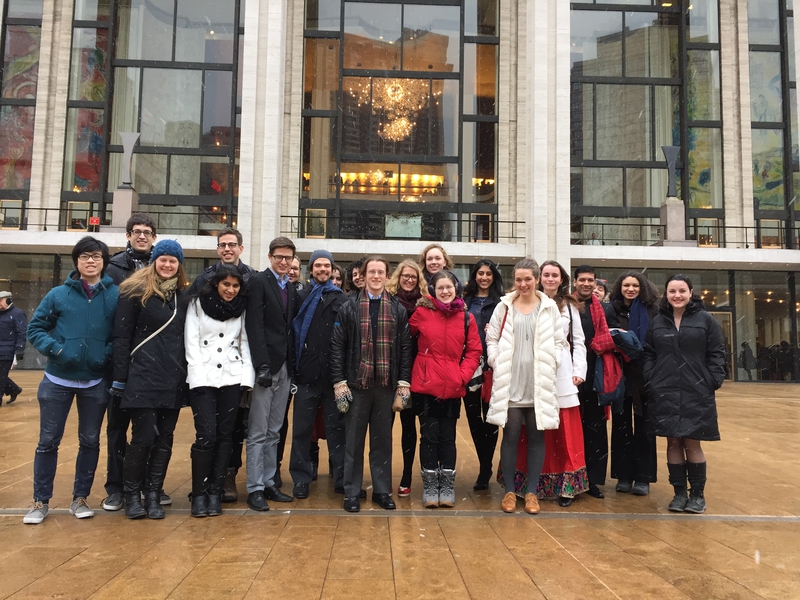 Arts Scholars outside of the Metropolitan Opera 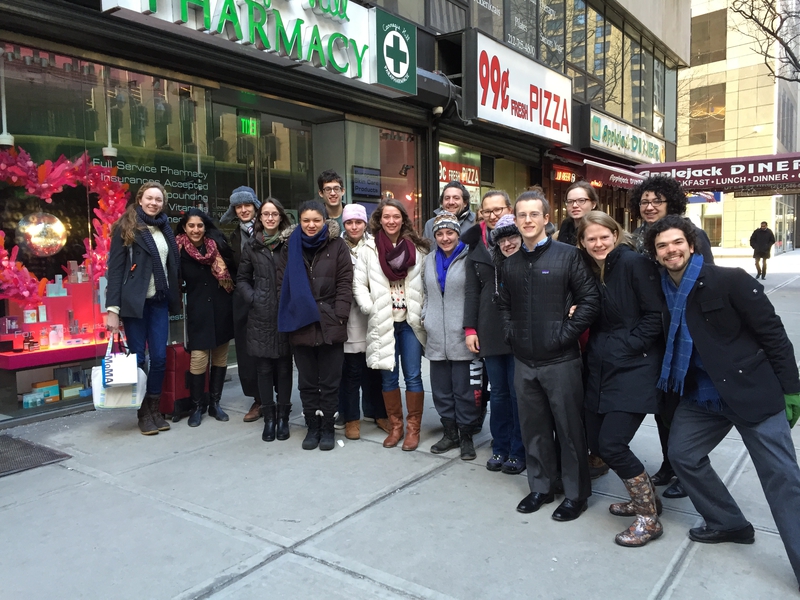 …and before boarding the bus back to Boston.

Last year we saw Rusalka at the Metropolitan Opera and explored the Metropolitan Museum of Art. This year, we saw Tchaikovsky’s Iolanta and Bartok’s Bluebeard’s Castle at the opera, Les Miserables on Broadway, and a million great things at the MoMA. MIT-POPlab made an appearance in a byline of part of the exhibit Uneven Growth: Tactical Urbanisms for Expanding Megacities, and the Urban Studies and Planning major in me got real excited. The exhibit considers “how emergent forms of tactical urbanism can respond to alterations in the nature of public space, housing, mobility, spatial justice, environmental conditions, and other major issues in near-future urban contexts.” I took notes*.

Arts at MIT is also hosting this spring’s Hip-Hop Lecture Series. Young Guru was the first speaker. I don’t remember everything he said, but I remember I was rapt. I remember that he spoke wisely and incisively. He talked about the music industry, about Jay-Z and lyrical honesty, about capitalism, about technology and his parents and the past and the future. You can read snippets here, and watch them here. 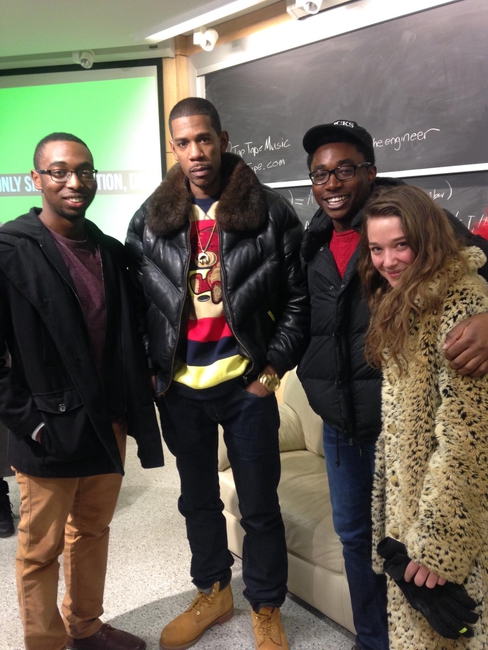 John said the talk changed his life. It changed my weekend, for sure, and bits of it have rattled and echoed in my head ever since. I loved what Young Guru said about truth in storytelling, about the value of telling your own story, not someone else’s, not the story you’re supposed to tell. Ife asked what it was like working with Jay-Z. What set Jay-Z apart? “He always tells the truth,” Young Guru said. “A lot of rappers lie. A lot of people lie. Jay-Z presents himself as he is.” My notes say “Jay-Z brought existentialism to the drug dealer narrative… as he grows, his music grows… goes from big pimpin’ to ‘I can write a song about my baby being born.’ & then guess what? Not everyone in the population is a drug dealer. So tell the story of where you come from.”

I’m still doing that a little bit. I still write, and I still want to tell true stories, not just about myself and where I come from, but about the whole world as it appears to me. I am not taking a writing class, but I saw Ta-Nehisi Coates (who once taught writing as a guest professor here, and is now a good friend and mentor to me) recently and we talked about writing and how to make a living at it. I think I’m going to try.

*I actually took notes everywhere. I do that in museums to remember what I see and look things up later. I end up with hodge-podge lists of painters’ names, works, and phrases that make me much less curious out of context, like “Roger II, Norman King of Sicily” and “Geographer Abu Abdallah Mohammed al-Sharif al-Idrisi, born in the Moroccan city of Ceuta on the straits of Gibraltar in 1100.”