part 1: My B.
Song: Bright by Echosmith.

A week before I got into MIT early action, I was rejected as a QuestBridge finalist. My friend, was accepted. I was so happy for him, but I was also terrified. I worried that I wouldn’t get into any school. I spent that week solemnly completing what became a seventeen page application to my local university’s honors college.⁠01 To be explicitly clear, the point of this line is not that it wasn't worth my time to apply to this university, but rather to emphasize how devastated I was by my rejection. The day after I turned in that application, Saturday, December 14, 2019, I got into MIT. 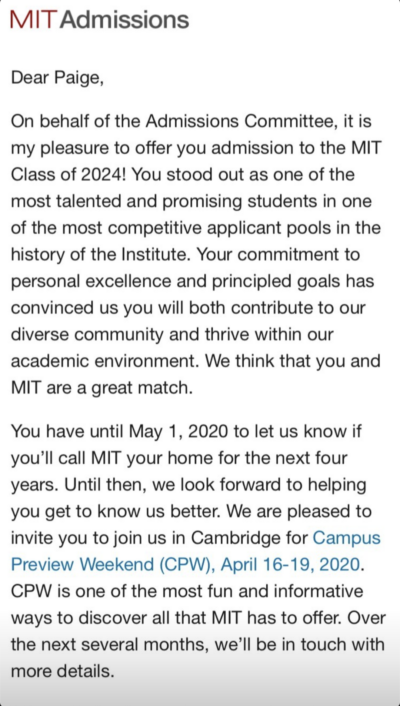 I still cannot believe it was 2019 when I got accepted. What the heck

I could tell the story of that morning– the story that I tell over and over again to anyone who will listen to it. But I’ve told that story before. What I want to talk about, is a tiny detail on the acceptance message: my name.

See, I was accepted a few places, but MIT was one of the few who (on their acceptance website) congratulated Paige. Not my  deadname⁠02 i.e. my previous name , not “[Deadname] (Paige) [Last Name]“, but Paige, plain and simple.⁠03 I mean, later that day I got an email from MIT with my deadname in it also congratulating me, but that's not the point.

And just like that, I started to love the school I would one day attend.
Because I could screenshot the acceptance and message it to friends and family without whiting out my goddamn name.

MIT was one of the few places to do this for me.

Later (in a silvery package) I received an official piece of paper that looked beautiful saying I had been accepted, though it had my deadname. So, in March 2020, I emailed Admissions and asked if I could one day get another piece of paper eventually that was corrected. One year later (due to covid), I finally got that piece of paper.

I felt my younger, devastated, self take a sigh of relief.

part 1b: while at the ‘tvte

I was slightly worried if things would change with name stuff once I got to MIT. Questions like “Would I be allowed to live at McCormick” (yes) and “What would my ID say” (Paige) occupied my mind. But really, for me the institute has been great in this regard. I hardly receive an email with my deadname– usually from financial aid or MIT medical; y’know, places that have to deal with my legal name. For the most part though, I’ve just been able to exist at MIT without needing to worry about this part of my identity.

part 1c: what does this have to do with “Bright IAP”?

Good question, hypothetical person asking it. Well, after nearly four years out⁠04 i.e. existing as as a transwoman, I’ve finally submitted the documents to change my legal name to Paige Bright. (If you noticed my last initial on these blogs change from a D to a B, shhhhhh.) I’m excited to see how the institute reacts to this next. But if I had to guess, it would be just as accepting as it has been for the last 2.5 years.

Cambridge becomes this sort of, stark sterile white over IAP. Maybe it’s the tunnel vision of MIT during the fall/spring semesters, but the brightness is infectious. It leaks into empty classrooms and abandoned dorm rooms. It weirdly feels neither warm, nor cold. I usually associate Coldness with the darkness of the fall⁠05 rip my vitamin D deficiency since at MIT , and Warmness with the bright blue skies of spring. But literally looking outside the window right now, the blue skies have been replaced with a bright white sheet that lacks depth or warmth.

part 2b: and what about it?

Some people might think MIT becomes hollower over the Independent Activities Period. To some extent this is true– friends down my hall come and go with their individual holiday plans, and the stud⁠06 student center is obnoxiously quiet. But for the most part, I think MIT and its students become a bit fuller.

My friends seem more well-rested and are talking about things they’re interested in and excited about that don’t have to do with classes. The entirety of the first floor of Building 2 has become a Puzzle Hunt HQ. People are reading just to read, and existing just to exist.

It seems as though people have been filled with the light and optimism of the bright white IAP skies.

I know I have been.

Howdy! I’m Paige and I am a junior studying mathematics. I’ve been interested in math and education ever since second grade. I am from the very center of California: Fresno, four hours from Los Angeles and four hours from San Francisco. So you may think that nothing ever happened there, but that is …
Keep Reading