We found lychee in a hopeless place.

This is no secret.

Here at MIT, I cook for myself during the school year with Spanish House, in a big cooking rotation. I cook every other week. I enjoy competing in the unofficial game of try-to-one-up-the-last-person’s-dinner that occasionally happens in the house. Cooking with Spanish house is wonderfully convenient, allowing me to cook often enough to enjoy it and not so often that it becomes work. But it also presents a creative challenge, since you have to cook for around 20-30 people, and not all recipes are good for that sort of thing. I’ve expanded my skills (I’m faster at chopping now!) and repertoire. I’ve made chicken Bruschetta bakes, chicken curry with lentils, potatoes, and carrots, fried tofu stir fried with shiitake mushrooms and mixed vegetables (I was very proud of that one) and many other dishes. I am a “weekday vegetarian”, and there’s always both a meat and vegetarian option at Spanish house dinners. I enjoy making the veggie dishes most.

Here’s a tumblr post containing many of the things I’ve cooked in the past, if you’d like to look at it. My more recent food resume includes vietnamese chicken rice noodle bowls and misir wot, a typical Ethiopian dish, as well as Squashagna (lasagna made of yellow squash and zuchinni!), among other things.

I don’t really strictly follow recipes (the closest is maybe the time I made these Vietnamese Chicken Rice Noodle Bowls) but I have drawn inspiration from the interwebz (looking up recipes and videos both in Chinese and English), eating other people’s cooking, and, of course, the grocery store.

In the summertime, I especially love fresh fruits and vegetables and gardening, and also, cheese. I get really excited about being able to cook and eat these seasonal ingredients. I once had some mushy blackberries and wondered out loud, “hmm….I wonder how you make jam?” and my friend Kevin P. ’18 said, “of all the people I know, you’re the one I would expect to know how.” This is one of the highest compliments I’ve ever received.

So you can bet that I was simply ECSTATIC for my first trip to the farmer’s market in Boston, on a lovely Saturday, at Haymarket :)

On Saturday morning, my good friend Mesi K. ’18 and I went to go do some yoga at a great (and affordable!) place on Newbury street. Afterwards, we met up with another cool person, who’s in the process of moving to Boston, Basia G. Berklee ’18. The three of us walked from Newbury St. all the way to Haymarket. It was a lovely day–a bit cloudy, nice and cool, a break from the heat.

When we got there, I was so excited that I bought some strawberries (for $1!!) and blueberries and grapes right on the spot before realizing there were even cheaper stalls further down. Which led me to want to write this post, giving people some tips and tricks for the farmer’s market this summer, because I learned a lot on my first trip!

Although I’ve been to farmer’s markets before in general, never to the Haymarket one in Boston and not as a college student (life is both hard and weird without a conventional living situation. Dorms aren’t really like houses or apartments, you know? Especially the kitchens). Haymarket is easily accessible from the green line and runs every Friday and Saturday, it’s a wonder I haven’t been going more often (I will be now!)

Walk around. Observe all the differ varieties of fruits and veggies and delicious things–taking note of the things you want and different prices or sizes or particular varieties (for example, yellow vs. red cherries) Maybe make a list (either written down or in your head). I forgot to do this at first out of excitement, but was more patient later.

(this is self explanatory, help the environment and also things are heavy) I was able to fill up my $1 Star Market reusable grocery bag, but it was actually so full that one of the handles broke when I was almost home, and I had to carry it awkwardly the last few blocks. 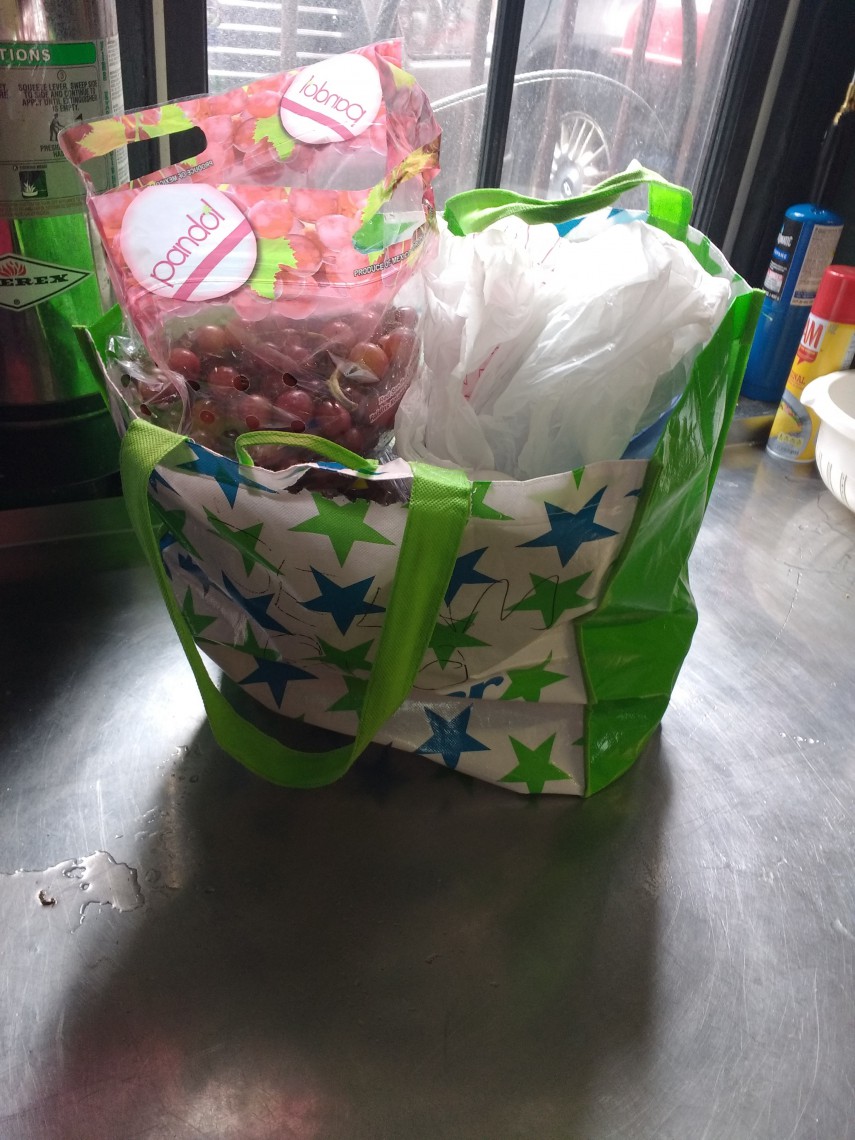 Aren’t you just brimming with anticipation???

I ended up with some sad, mushy blackberries (still delicious though) (and caused my friend to make the jam comment) because I bought them early and didn’t rearrange them in my bag as I went along. Buy heavy, sturdy things like watermelons, apples, oranges, squash, cucumbers and other root vegetables first, so they automatically go in the bottom of your bag. Get delicate foods like berries and herbs, or tomatoes and peppers, last. If you suddenly remember that you needed potatoes at the end, take the time to take stuff out and rearrange your bags (it’s worth it, expecially when traveling by public transportation and walking)

4. Take your time going through the produce

The best thing about farmers’ markets is that they’re fresh and cheap and amazing!! The less convenient part is that you need to pay more attention when selecting your produce. Batches of things are less standard and may be smaller or larger, and some items will be more or less ripe than others, or have been crushed along the way or by other shoppers unnoticed.

Nothing happened to us, but I just noticed how busy and crowded the market was and thought it was probably a good place for pickpockets. I might just be paranoid though. As long as your belongings are secure (preferably in an inner pocket of a backpack or bag) you’ll be fine

6. Pick through and prepare!

Contrary to popular belief, one bad apple does *not* spoil the bunch–but it will if you just throw everything in the fridge and leave it in there. When I got back to where I’m living over the summer (at Phi Kappa Theta Fraternity) I immediately washed, dried, and picked through the produce I’d bought. (Optional: take some snapchats because you’re so excited about vegetables!!) 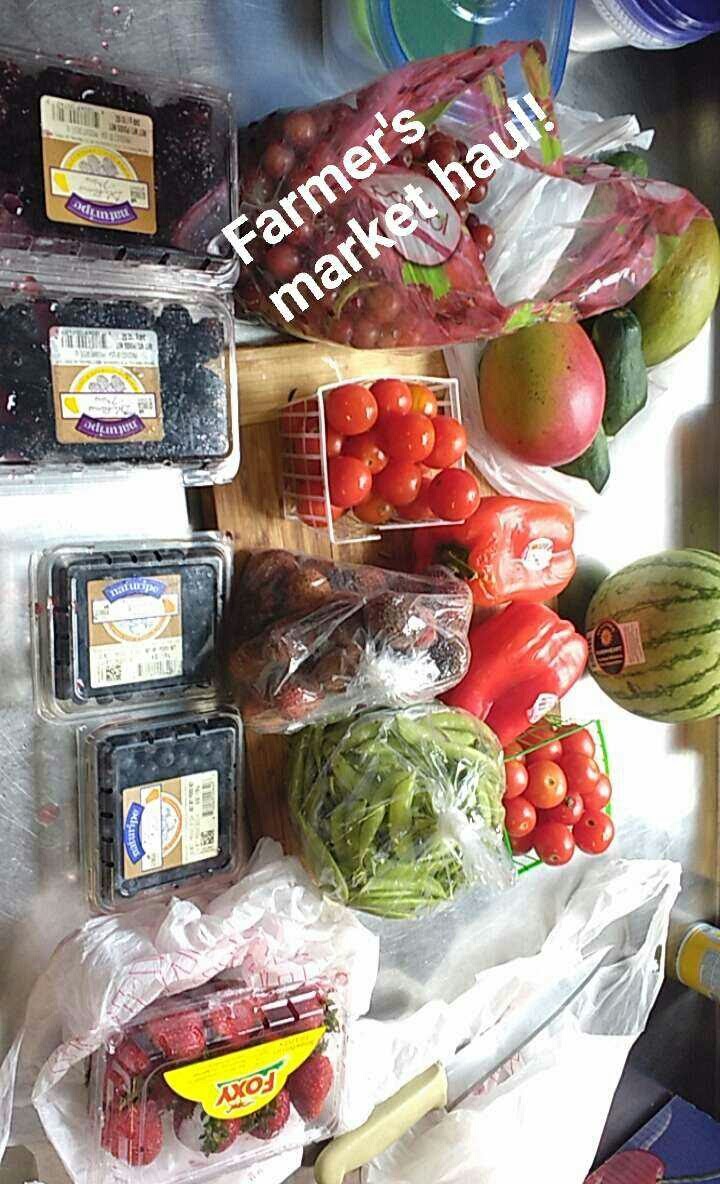 soo much food. And so cheap!!

I peeled and chopped the cucumbers, washed everything, and picked out occasional bad strawberries. I packed the vegetables into storage containers so everything was nice and easy to put away. I washed the lychee (they had lychee!! I was so excited!) really well and put it in the freezer, which is how my aunt eats them in the summer in China, because the fruit inside doesn’t exactly freeze, so it’s just nice and cold and delicious and lasts longer. 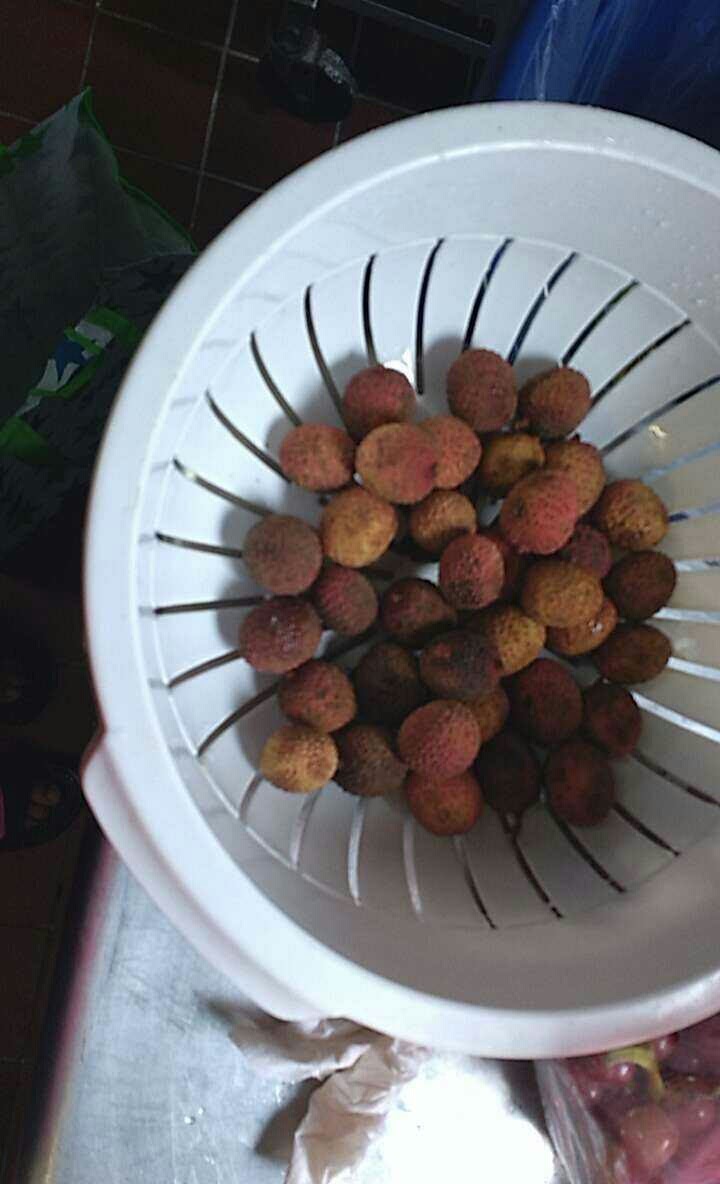 You can prep as much or as little as you like, but at least wash things, which will help you notice any parts that have gone bad so you can toss ’em. I would highly recommend just doing everything right then, though, because then everything is ready to eat, freeze, or cook for the rest of the week.This morning, I went to a friend’s house for brunch, so I just tossed some of my already-prepared fresh vegetables in a big tupperware and brought it with a container of tomato-basil hummus dip. I was surprised how popular the veggies were–I’m telling you, fresh crunchy things in summertime are awesome. 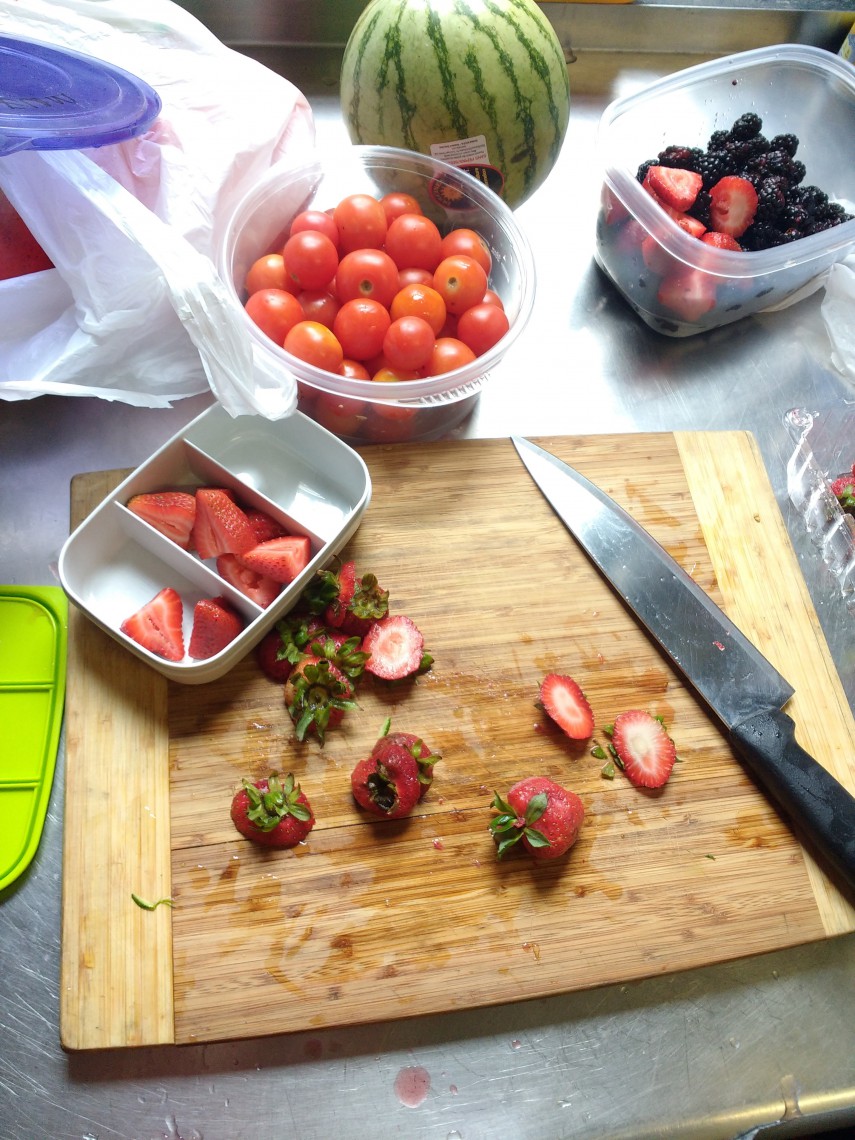 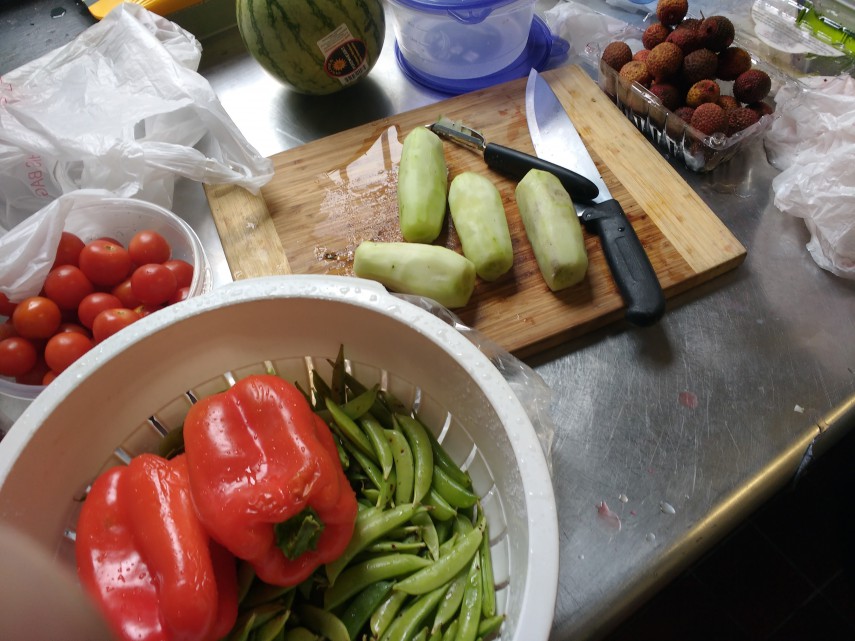 But don’t seal up your berries in storage containers! Berries need to breathe. Here’s a great article on how to make your berries last longer.

To be honest, eating happens throughout this entire process (samples at the market, grabbing a couple grapes out of the bag on the train home, munching on strawberries as you chop them after washing, etc.) but now you can now officially congratulate yourself on a successful trip to the farmers’ market! I put all my containers away and sat down and worked my way through a good number of snap peas. And I’m thinking about the mangoes sitting on my desk for breakfast tomorrow~

I actually don’t cook as much in the summer, even though I have more time. It’s just, I really like the freshness of eating things in their pure form, and it’s so hot I don’t usually want to eat much anyway. Snap peas that really *snap*, the sweetest berries, cold cucumber slices–I just wash, chop, peel, and eat.