On Monday, the 2005 Nobels in Economics were announced.

Congrats to the two 2005 Nobel Laureates in Economics! —

— Robert J. Aumann and Thomas C. Schelling. The Nobel website has a nice summary of their work on “conflict and cooperation through the lens of game theory.”

Aumann actually is an MIT alum — he received his Masters and PhD from MIT in Course 18: Mathematics. (Here’s some more info from the MIT News Office) 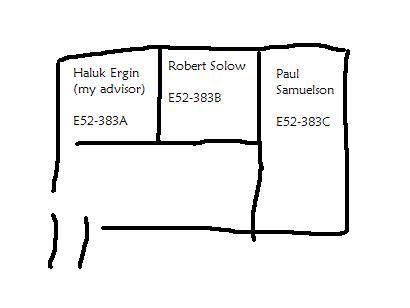 Here’s my Nobel-worthy rendering of the E52-383 office cluster. In the first office is Professor Haluk Ergin, my advisor, who studies game theory. In the second and third spaces are Professors Emeriti (and, incidentally, Nobel Laureates) Solow and Samuelson.

A third longtime faculty member, the late Professor Emeritus Modigliani, earned a Nobel “for his pioneering analyses of saving and of financial markets.” 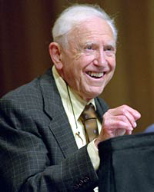 Joseph Stiglitz (PhD ’66) and John Nash (faculty ’51-’59 — you may have heard of him) are other MIT-affiliated economists who have won Nobel Prizes for breakthroughs in game theory. Obviously, it’s only a matter of time before my advisor wins his Nobel.

Here’s the Alfred P. Sloan Building (E52), home of the department of cconomics. (This is where all the magic happens.) 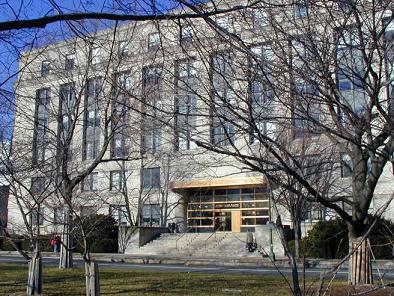 Huge kudos again to Professor Aumann for his great achievement! 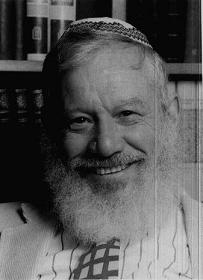